The more I travel around Germany and France, the more I love all of the culinary discoveries I make. German cuisine in particular has a fairly well-known stereotype attached to it, but from my travels around the country I’ve discovered that it’s a lot more than huge quantities of meat and potatoes. Every year I visit new areas of Europe for the Christmas markets and this year I toured many towns and cities along the Rhine River, sailing with Viking River Cruises from Amsterdam to Basel. What amazes me every year though are the differences in food offerings not just country to country, but even between towns fairly close to each other. The foods found at these markets are traditional comfort foods and usually reveal what people enjoy the most in the local regions. Given how important food is to the Christmas market experience, I thought I’d share a few of my favorite food finds from my 2015 Christmas market cruise along the Rhine. 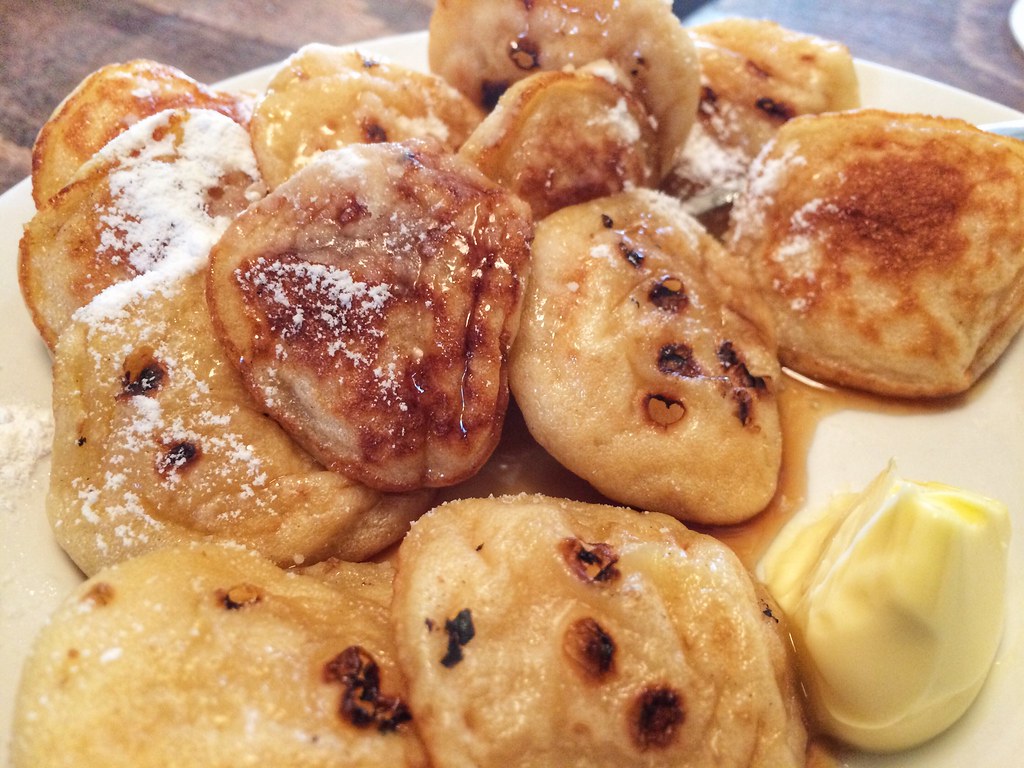 I had heard of these classic Dutch treats long before my experience with them in the large Christmas market in Dordrecht, but I don’t think I’d ever tried them before. Like most great comfort foods, poffertjes are incredibly simple – they’re just small, light pancakes but not dense, instead they’re almost spongy in texture. Served with butter and powdered sugar, it’s the perfect food for a chilly Christmas market. Chatting with some Dutch friends, I was surprised to learn that poffertjes are usually just for kids; served at birthday parties or other important celebrations. That is until Christmas, when adults who want to relive some great childhood memories buy a batch to enjoy before continuing on to their shopping. I enjoyed poffertjes twice; in a market and at a small restaurant. The restaurant version served with syrup was actually my favorite, but no matter how you eat them, they’re a not to be missed Christmas market tradition. 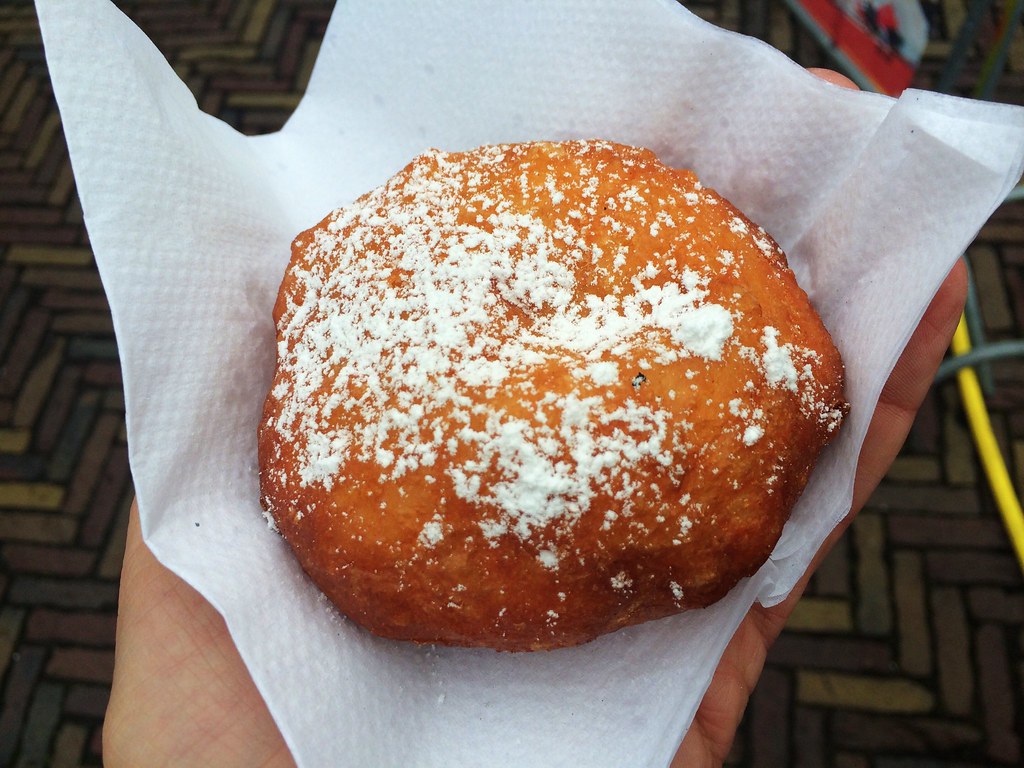 I have a sweet tooth and a particular fondness for pastries, which is why I was almost immediately drawn to these delicious fried balls of dough. Found both in Holland as well as Belgium, oliebollen are deep fried balls of dough to which raisins or apples are often added. Finished off with a generous smattering of powdered sugar, it’s not the easiest thing to eat, but it certainly is delicious. My favorite variation was a Nutella olieboll, which had been filled with the creamy hazelnut spread.

I love exploring the various regions of Germany because the food changes so dramatically from one place to the next. What I noticed touring the Christmas markets this year was completely different from the German markets I saw last year, so while the markets can be similar, the food really is a totally new experience. Of the treats I sampled, these few were some of the more notable bites. 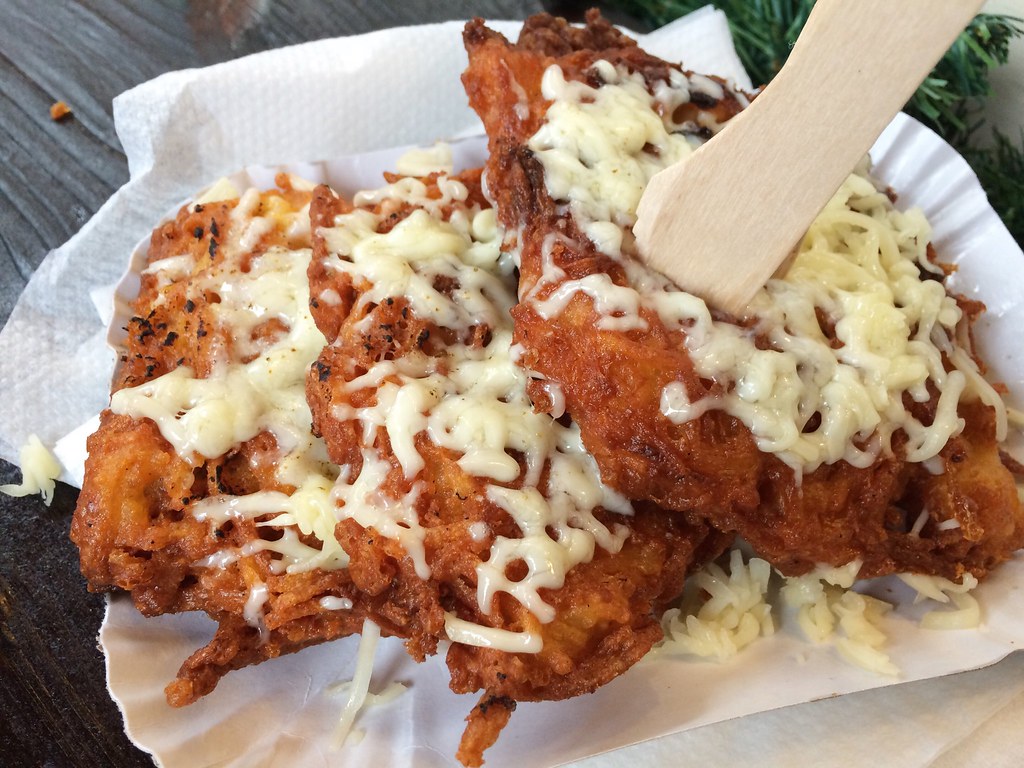 This is a great example of a new food experience. I didn’t see this at all last year along the Danube, but they’ve been an important culinary fixture this year as I explored the villages and cities along the Rhine with Viking River Cruises. They’re also very simple, these potato pancakes are deep fried potato fritters served with a variety of toppings, from applesauce to cheese. They’re usually served in bunches of three and are more than enough for a complete meal. They are also intensely popular, at least based on the markets I visited and for many folks seem to be one of the food staples of the Christmas market experience. 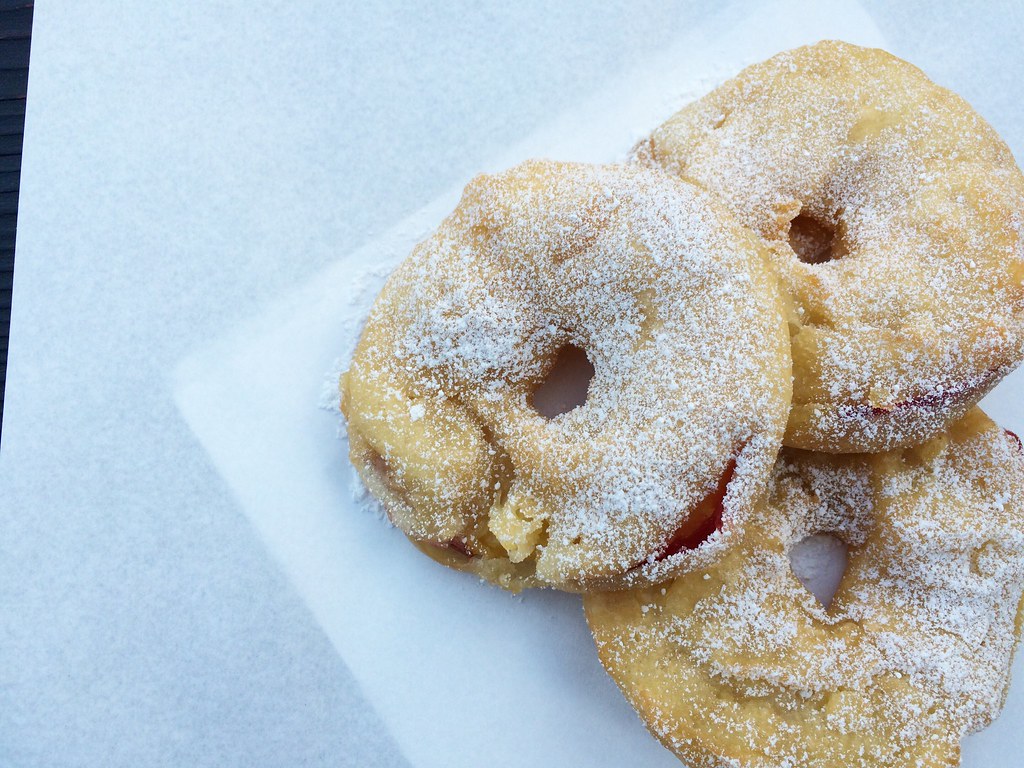 Another Christmas market phenomenon I’ve noticed is that some barely have any desserts at all, and for a while I was worried that the Cologne markets would fall into this sad category. Then I saw the Pfannkuchen and all was right in the world again. Another deceptively simple dish, the traditional version is just pancakes or crepes, many times to which apples are added. The stand I visited had something extra though, the apple slices were battered, deep fried and then doused with yet more powdered sugar. Eating them, the apples melted in my mouth and the overall texture was very much like a donut. Also served in threes, these are a fun snack to share with friends. 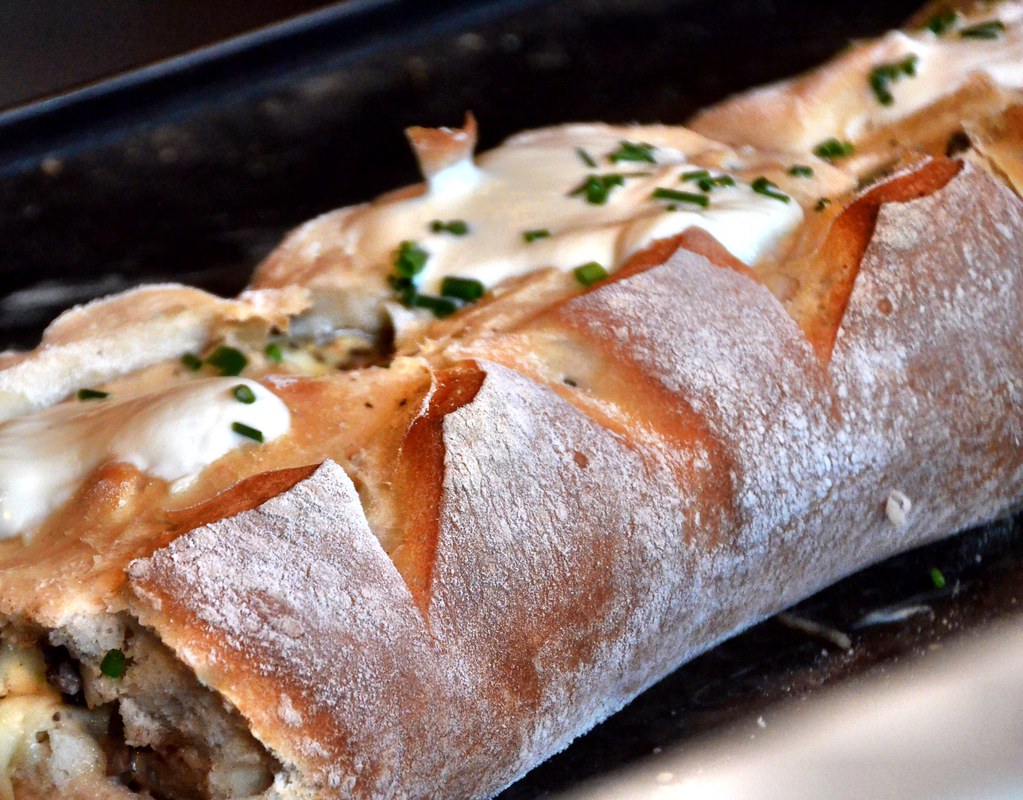 There’s nothing better in my opinion that a great sandwich, which is why I first stopped in front of the Handbrot stand. But I quickly learned that it’s so much more than that. Made on-site in a wood-fired oven, the dough for the handbrot is rolled flat and a then filled with a thick cheese sauce. Served hot from the oven, creme fraiche and chives are added as well as other toppings – I went with the ham. Hearty, filling and delicious, this is the perfect Christmas market main course.

One of my favorite side dishes, I was thrilled to find it being served at the Christmas market in Speyer, Germany. Although there are variations, at its core spätzle is simply a dish of soft egg noodles. What made the bowl of Spätzle I enjoyed in Speyer so good though was that they were then grilled and fresh Emmenthaler cheese was added when I ordered it, creating a German variation of mac and cheese that is better than any box of Kraft you’ve ever tried before. 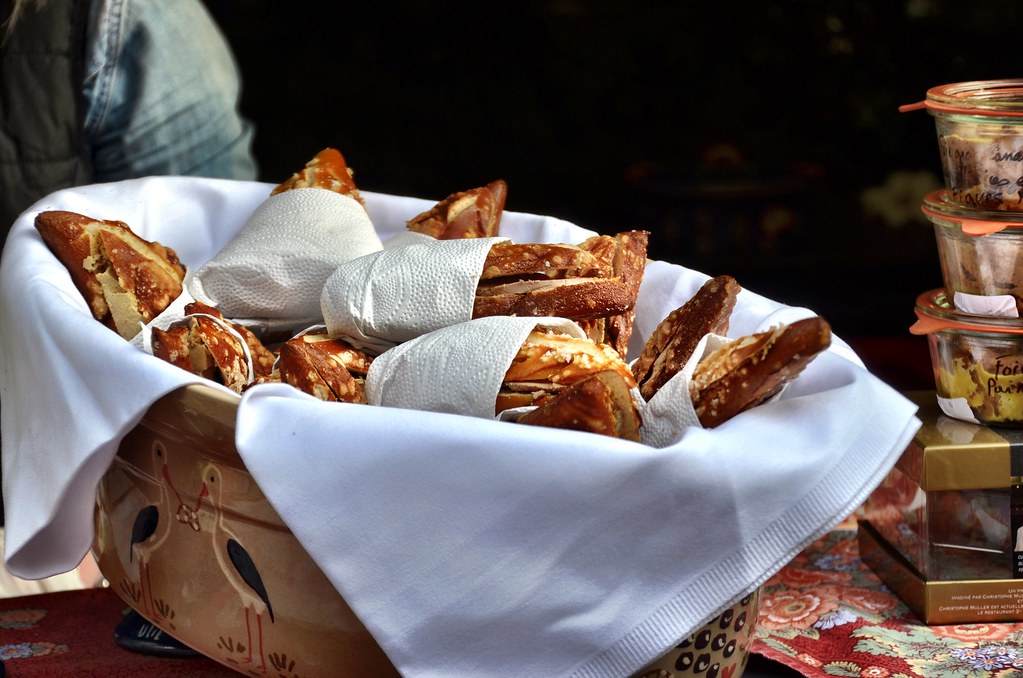 Fois gras is a well known French delicacy, but it takes on a special meaning in Strasbourg. The city claims to be the birthplace of this holiday indulgence and it can be found throughout the markets around town. Flavored with spices, it makes for an unlikely but delicious sandwich. 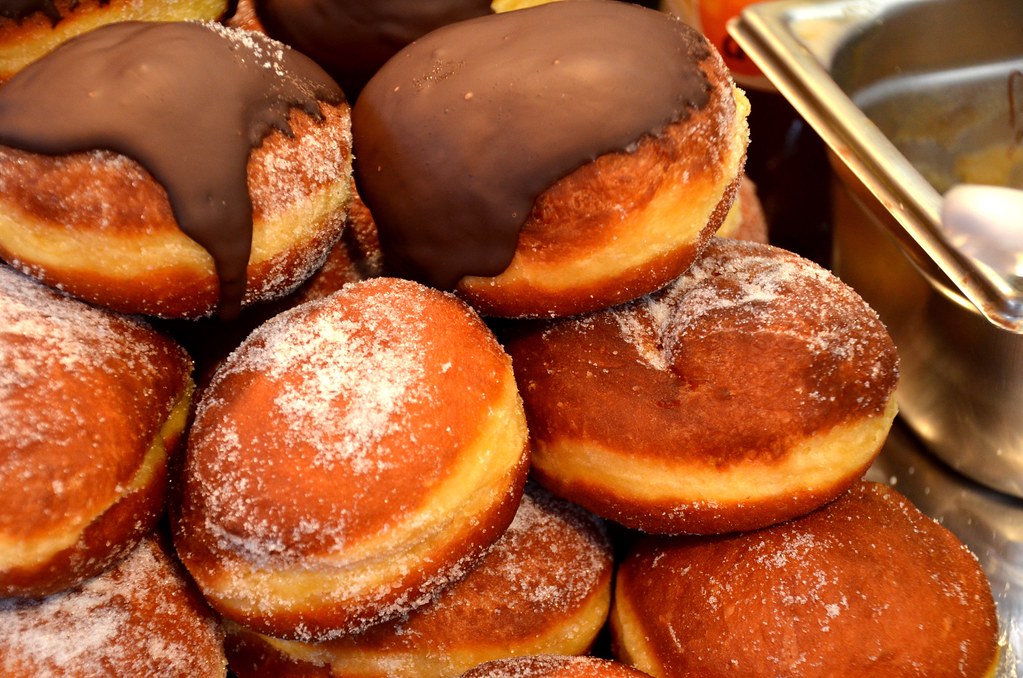 Most of us are familiar with the word beignet – you know, those small little powdered donuts sold at Café du Monde in New Orleans. Well, in Strasbourg they have a variation, but they’re nothing like the Louisiana version. That being said, there’s nothing that will necessarily surprise anyone with these tasty treats, they’re simply large donuts served either with powdered sugar or filled with jelly or chocolate. 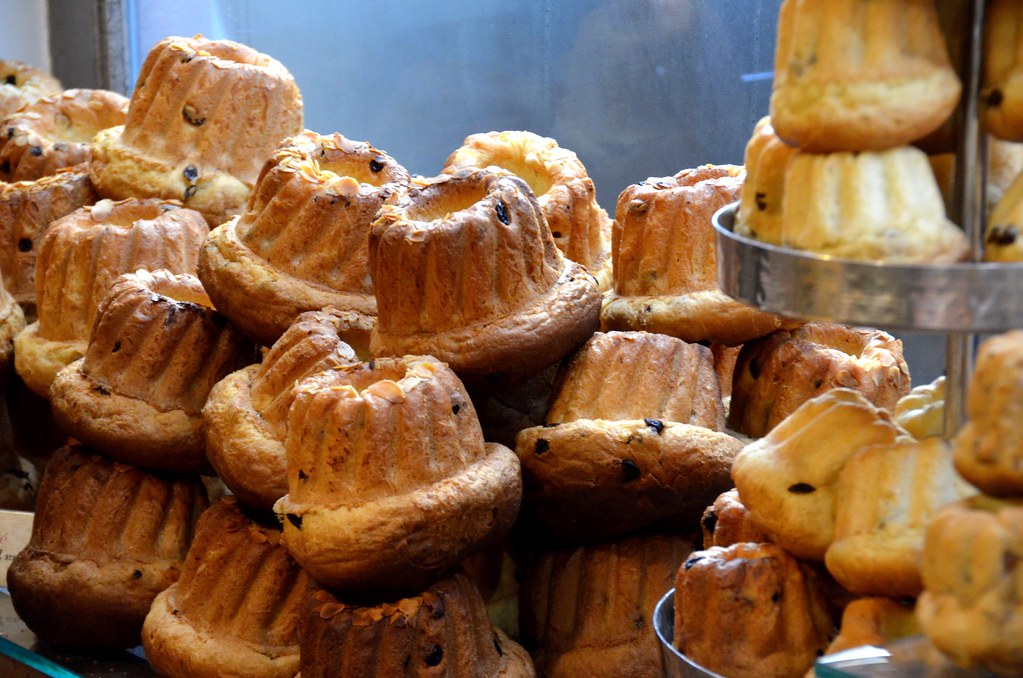 One of the first Strasbourg-specific delicacies I discovered was also the city’s most iconic, the Kouglof. A very simple brioche bread, raisins and almonds are baked into it and while it’s available in a variety of sizes, it always has a classic crown shape. But be sure to drink it with coffee, it’s very dry otherwise. 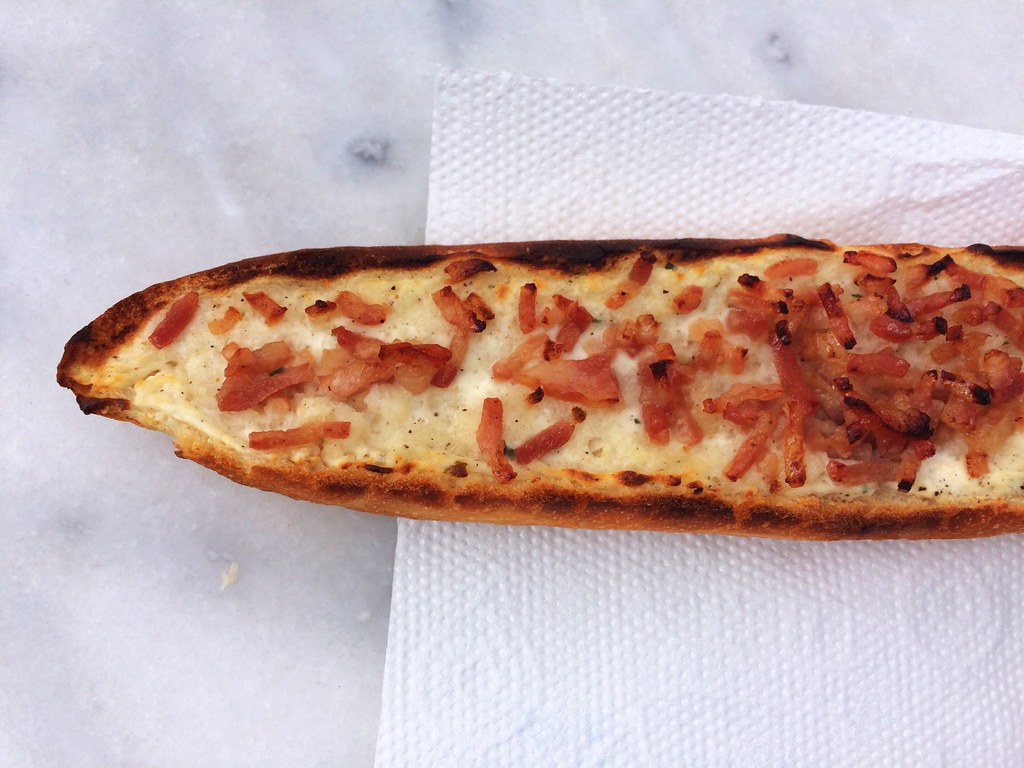 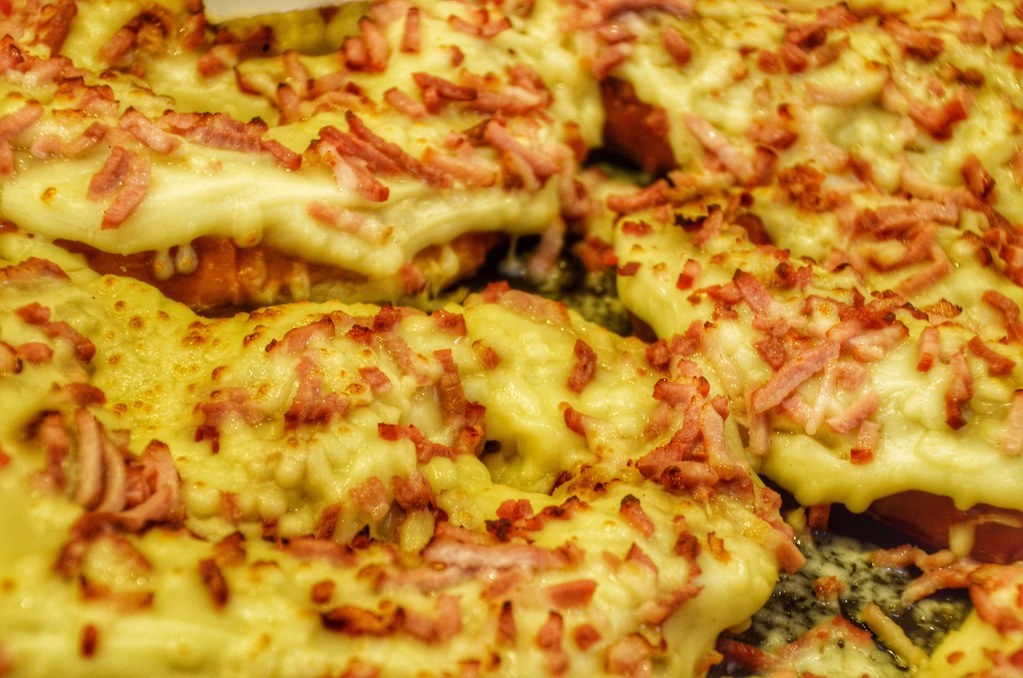 From my admittedly brief experience with Alsatian cuisine, one thing seems certain to me – they love bread in any form. One of the symbols of Strasbourg is the bretzel or pretzel; no doubt carried over from their long history of being part of Germany. They come in every size and shape, both sweet and savory. The most extreme version I enjoyed was an over-sized one topped with melted Munster cheese and bacon. Another go-to were half baguette sandwiches, topped with meats and cheeses and then toasted. Not for the celiac in the group, these are however some delicious local finds.

Food is one of the most important aspects of the travel experience, and Christmas is a uniquely special time when you can find the homey classics that are at the root of whatever town you may be visiting.