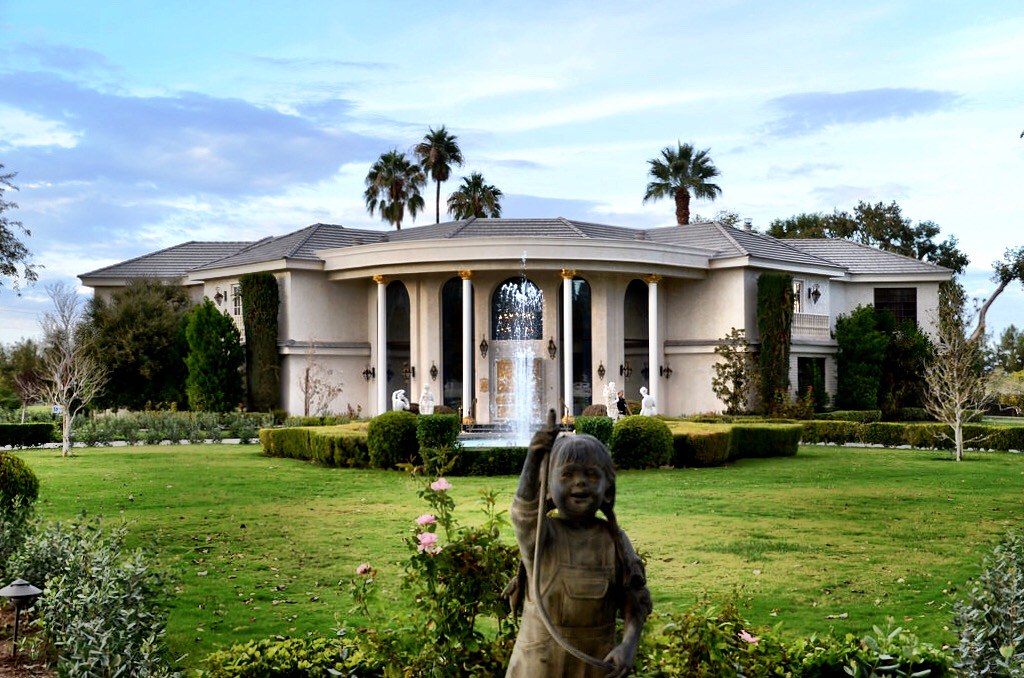 For years residents of Las Vegas drove past the giant golden gates of the estate and wondered. They wondered what exactly was behind those gilded walls, what exactly was Casa de Shenandoah – Wayne Newton’s massive 55-acre estate – really like inside. Up until recently that was a mystery left unsolved, but in September 2015 Mr. Las Vegas started tours of his estate and for the first time anyone can visit the property of this legendary showman. While in Las Vegas recently I made sure that I included a stop at the Casa de Shenandoah, excited to see a bit of kitsch and camp. But what I actually discovered surprised me and in the process taught me a great life and travel lesson. 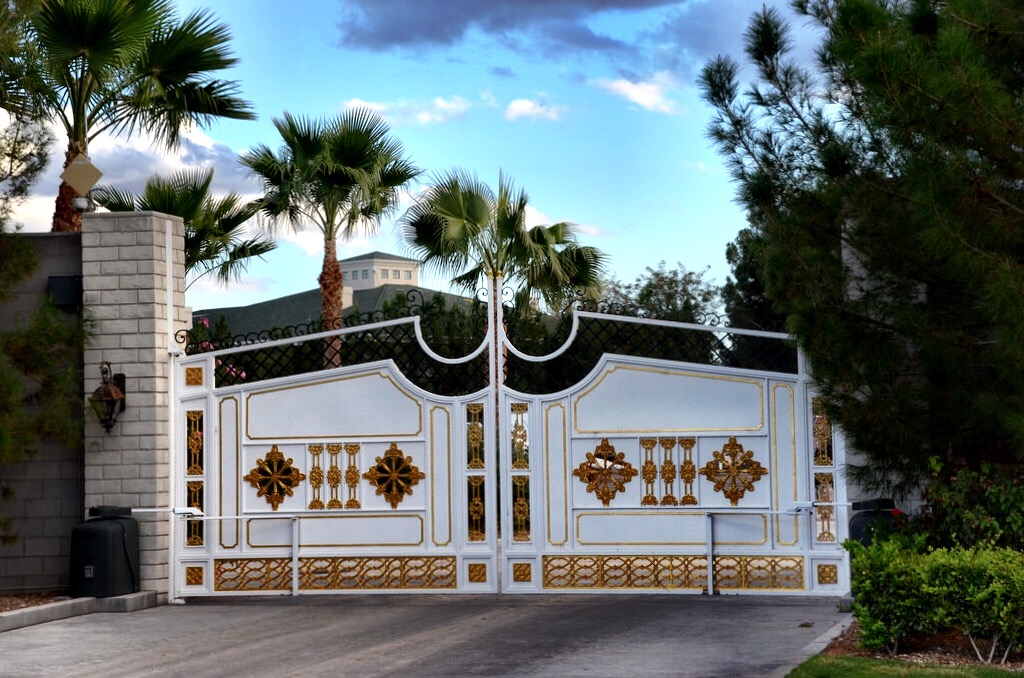 As shocking as it is to me, there are some younger folks out there who may not be familiar with one of the quintessential performers of the 20th century, so allow me a moment to briefly explain who Mr. Newton is and why he became so very famous. Exhibiting great talent at a very early age, Newton made the rounds as a teen performing with some of the great talents of the era like Jack Benny, Bobby Darin, George Burns and Jackie Gleason. Early on Newton became a Las Vegas lounge singer and for decades Wayne Newton was (and is) and staple of the Vegas entertainment scene. He’s perhaps best known for his song “Danke Schoen,” which has been used in scores of TV shows and movies.

His estate, Casa de Shenandoah, was named as a tribute to his birthplace in Southwestern Virginia. Newton bought the first five acres of the land in 1966, back when Vegas was popular but nothing like it is today. The mansion was built in the 1970s and is the centerpiece of what is now a 55-acre estate that includes 8 homes, 2 barns, 60 horse stalls, 3 arenas and a plane. At $50 million, it’s also one of the country’s priciest celebrity retreats and touring this opulent compound is a rare opportunity to look at how the other half truly lives. I was there on a mission though, I wanted to see exactly what touring this house was like and what oddities I would find. 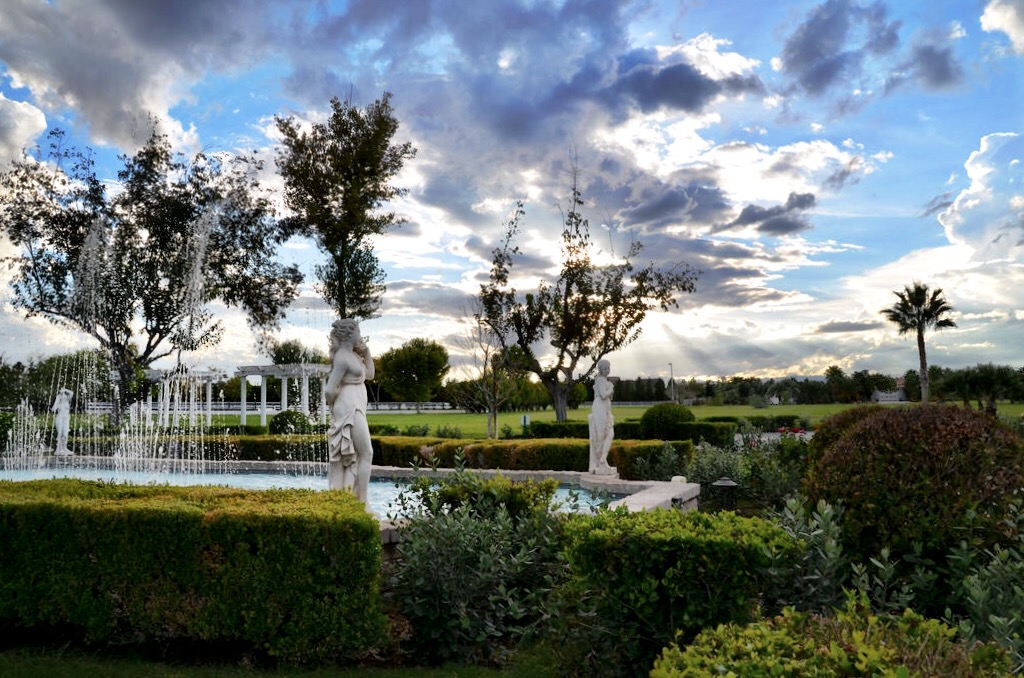 There are several different tour options when visiting the estate of Wayne Newton and while none are particularly inexpensive, I later realized that they’re actually well worth the cost, believe it or not. Regardless of which package you book, the tour starts across the street from Casa de Shenandoah at the Wayne Newton visitor center and a 15-minute video all about the life of Wayne Newton. Although I certainly knew who this American icon was before visiting, I confess I didn’t actually know a lot about his life and the video instantly gave me a lot more respect for the man than I ever thought I’d have. It was the first chink in my armor of sarcasm that I had specially constructed for the day, the first inkling I had that visiting the estate wouldn’t be the campy experience I anticipated. 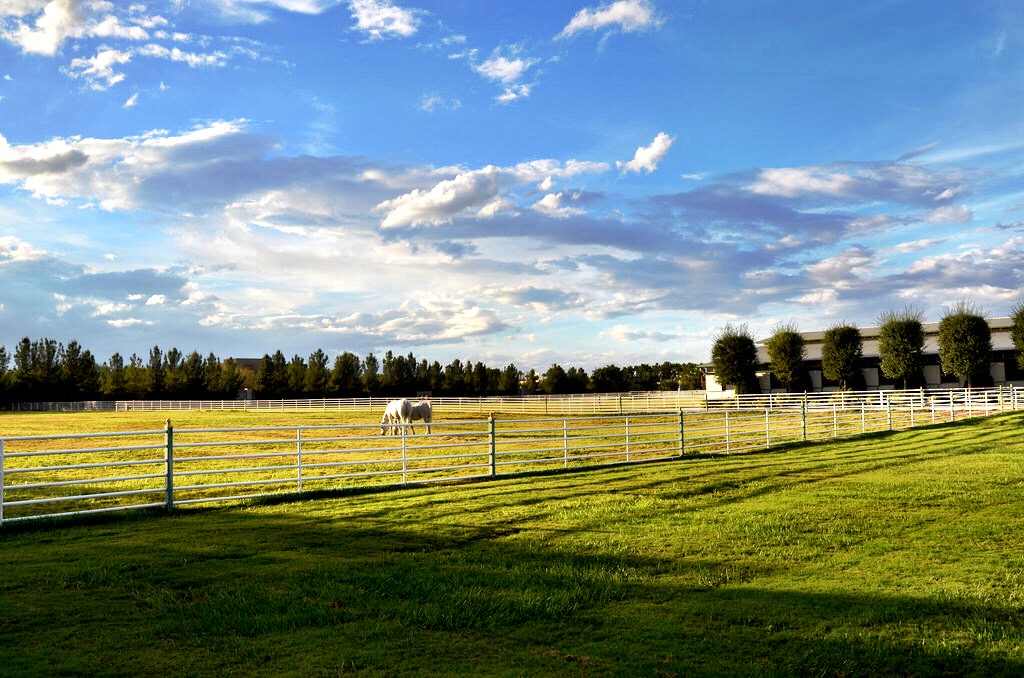 Shuttle buses whisk visitors across the street and through those massive gates in what honestly is an exciting moment. It’s like the beginning credits of “Lifestyles of the Rich and Famous” and knowing that so few have had this same opportunity made everything a little bit more special. What happens next depends entirely on the type of ticket booked, but regardless of your level of entry it’s hard to miss the love that Wayne Newton has for his Arabian horses. Almost since he first built Casa de Shenandoah, Newton has been breeding horses and he has personally named every one of the 1,000 born on property. If you booked the highest-level ticket, you’ll be taken to a special horse pool, built to exercise the horses. The grandstands surrounding the pool may be a little optimistic, but I couldn’t help but smile when I saw the thoroughbred walk up and be escorted through his daily routine. Swimming is one of the best ways for horses to get the exercise they need, without risk of injury and was definitely a first for me. Newton’s love for animals doesn’t end with horses though, he also has a small zoo with several exotic species. But I wasn’t there to visit a zoo. No, I was there to take a peek inside the house of Wayne Newton himself, to see what over-the-top opulence in which he had spent decades decorating his house.

It’s hard not to be impressed walking up to the main house itself. Immaculately manicured lawns and gardens lead guests through the massive main doors of the house, and believe it or not but “Danke Schoen” is pumped through an outside speaker system, just to add to the effect of entering the sanctuary of Mr. Las Vegas himself. Walking through those sparkly front doors – Baccarat crystal is everywhere throughout the house – that sense of awe and wonder was everything I had hoped for and more. Twin staircases frame the entranceway and the eye is immediately drawn to the main room of the house, with windows featuring the gorgeous grounds of the estate itself. 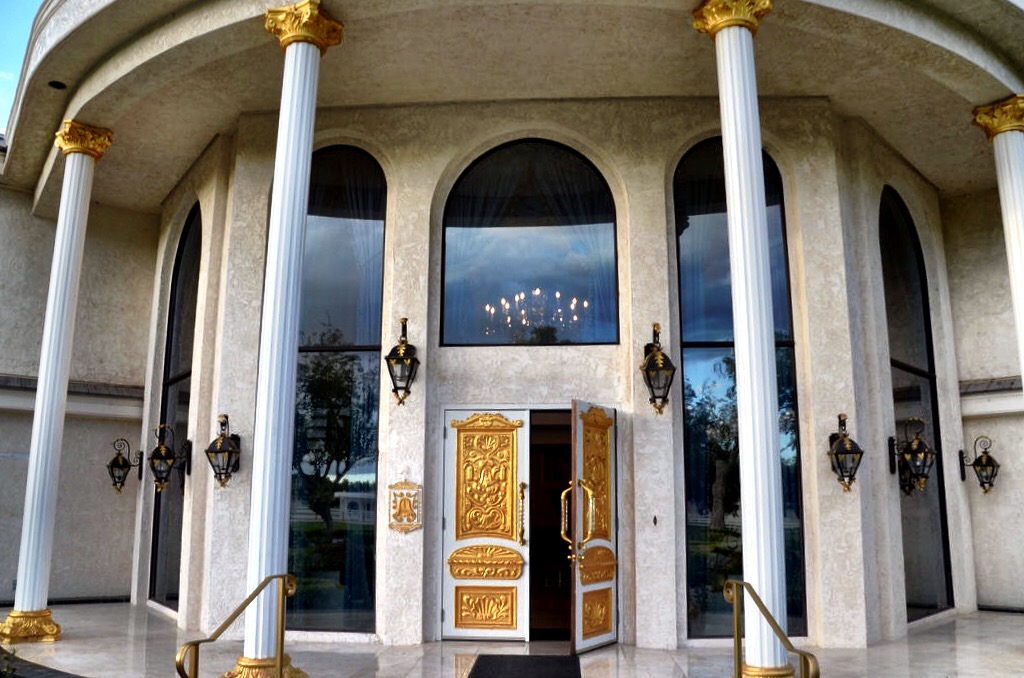 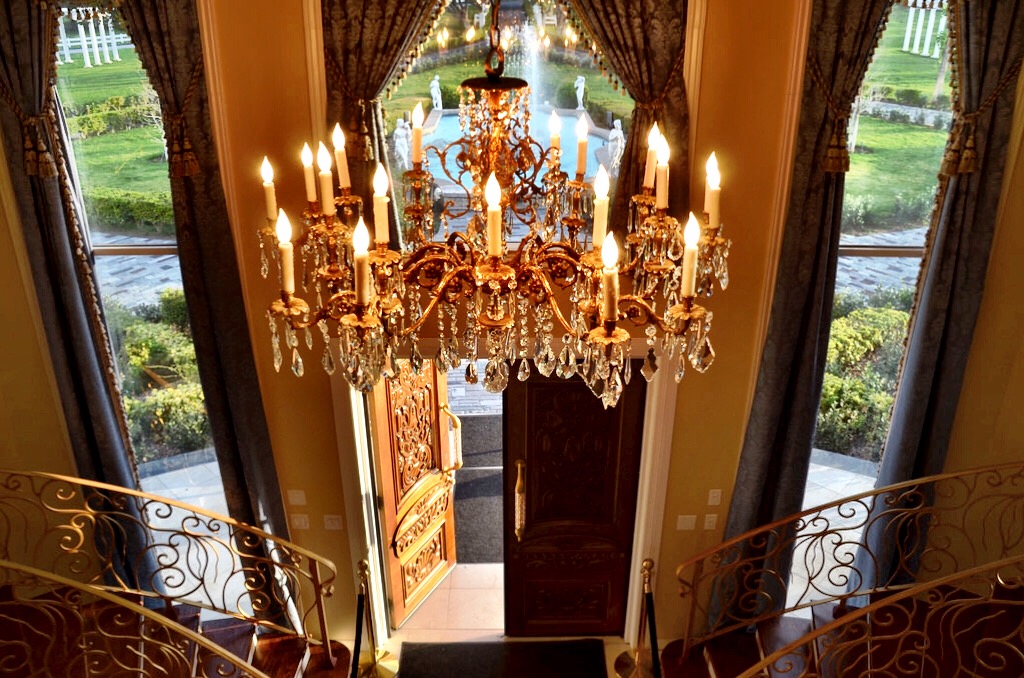 Walking into that main room I anticipated something more like Liberace with the excess, but instead I was surprised. Sure, there was a lot of gold and crystal, but there were also family photos and mementos placed lovingly not only in the family room, but throughout the house. That was the first clue I had that this wasn’t meant to be a museum to all things gaudy, instead it was much more like a normal house than I had expected. Those moments of familial love though were tempered by antique Lalique crystal billiard tables and a special set of German-made china that Newton himself designed. But in spite of those moments of kitsch, my impression of the estate and of Newton himself had somehow changed. This wasn’t the home of an over-the-top showman; it was the home of a family man who knew what he loved in life, namely his wife and kids. The upstairs was as normal a house as I’ve ever seen. The kids and parents rooms may have had large closets, but they were more like my house than the Jungle Room at Graceland. Leaving the house and closing the door, I was impressed by the design and overall hominess of the main house; all of that desire to make fun of it all had vanished completely. 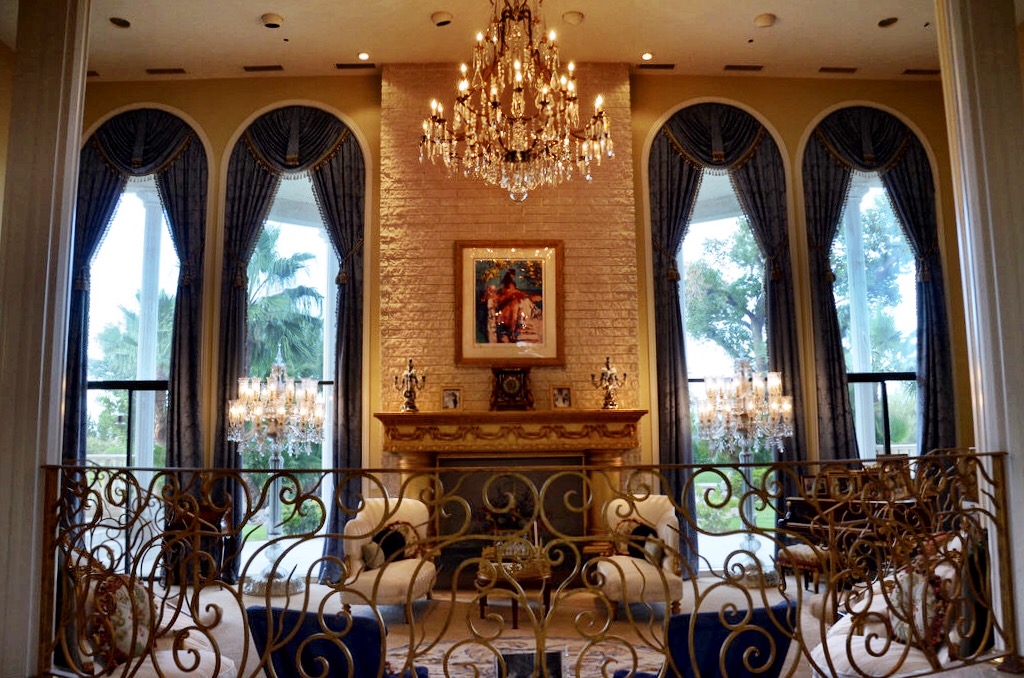 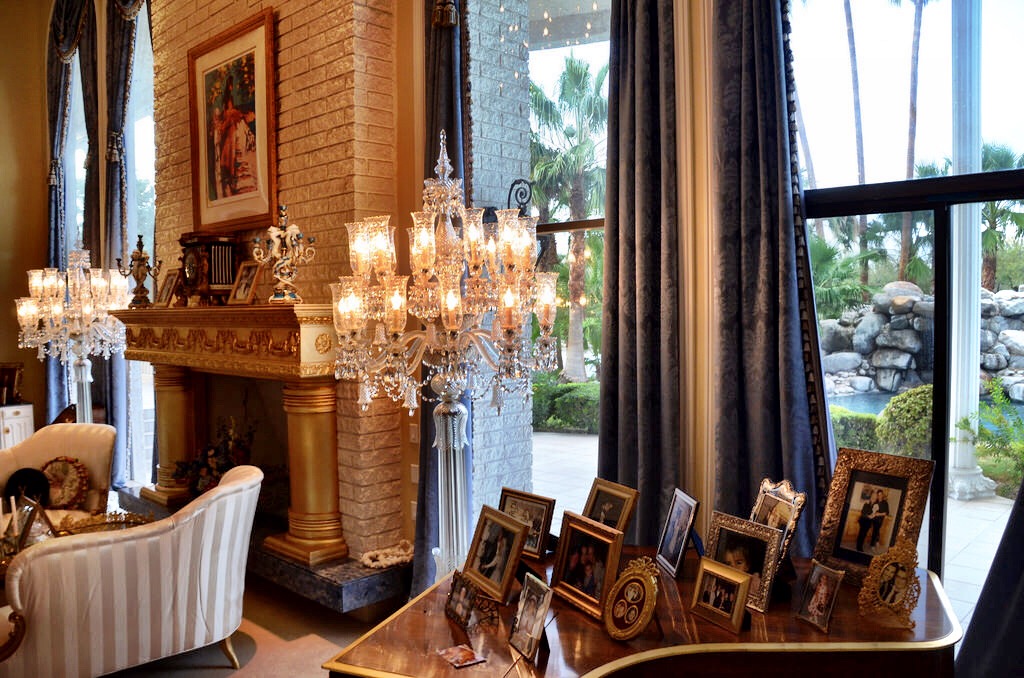 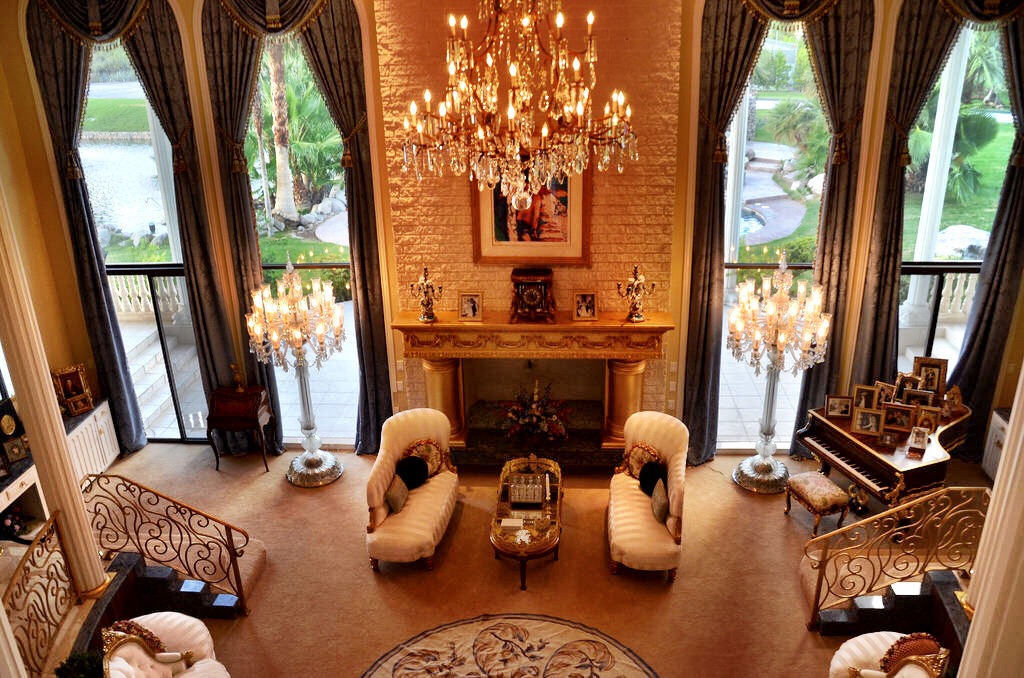 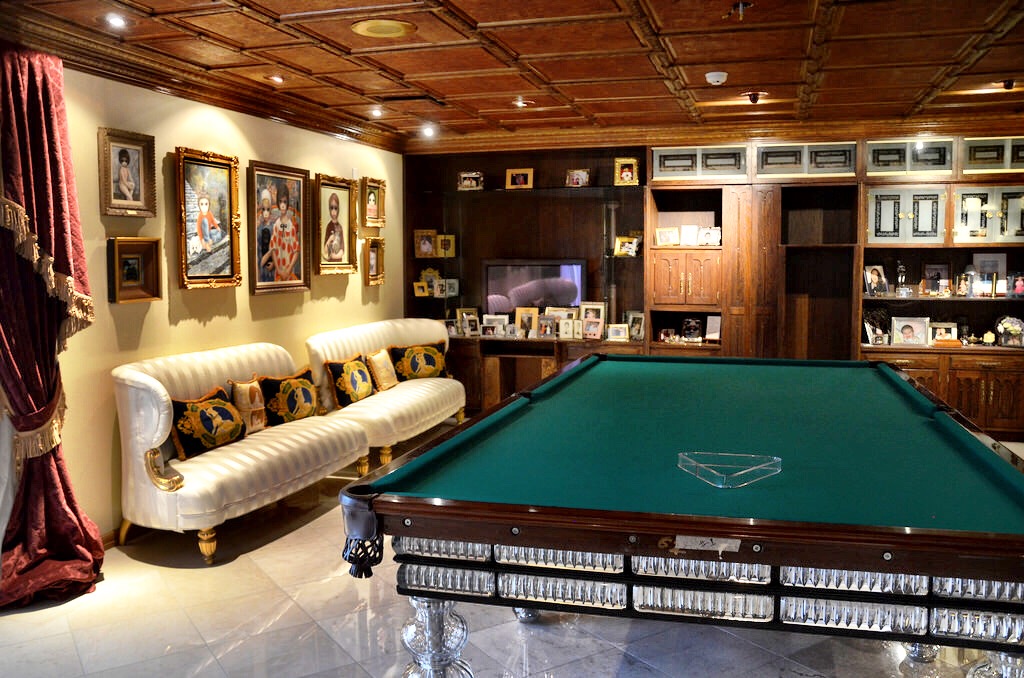 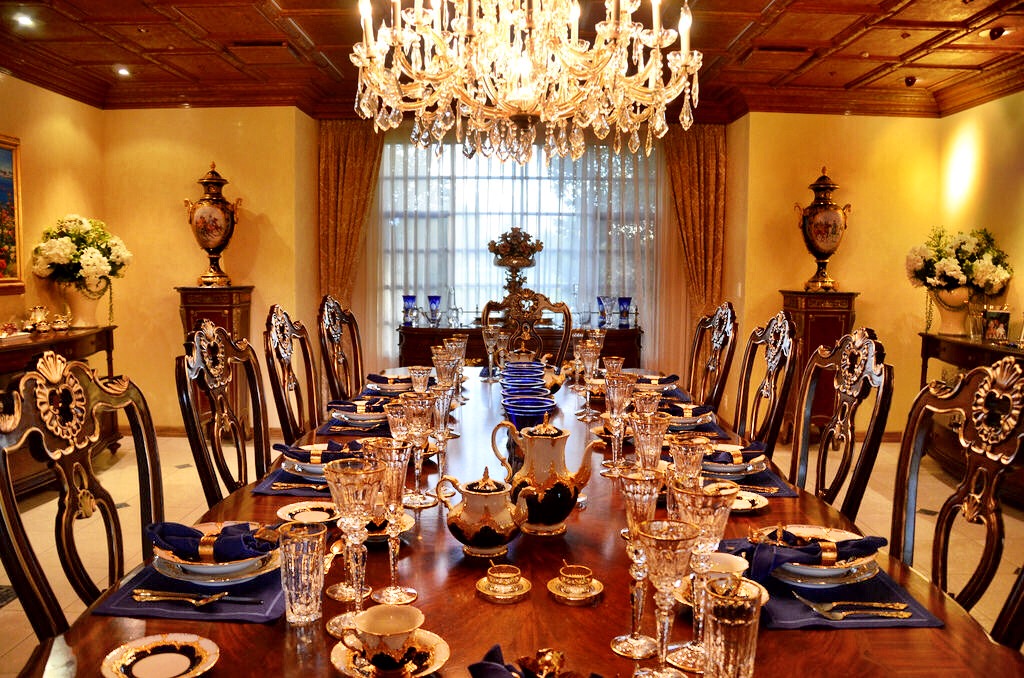 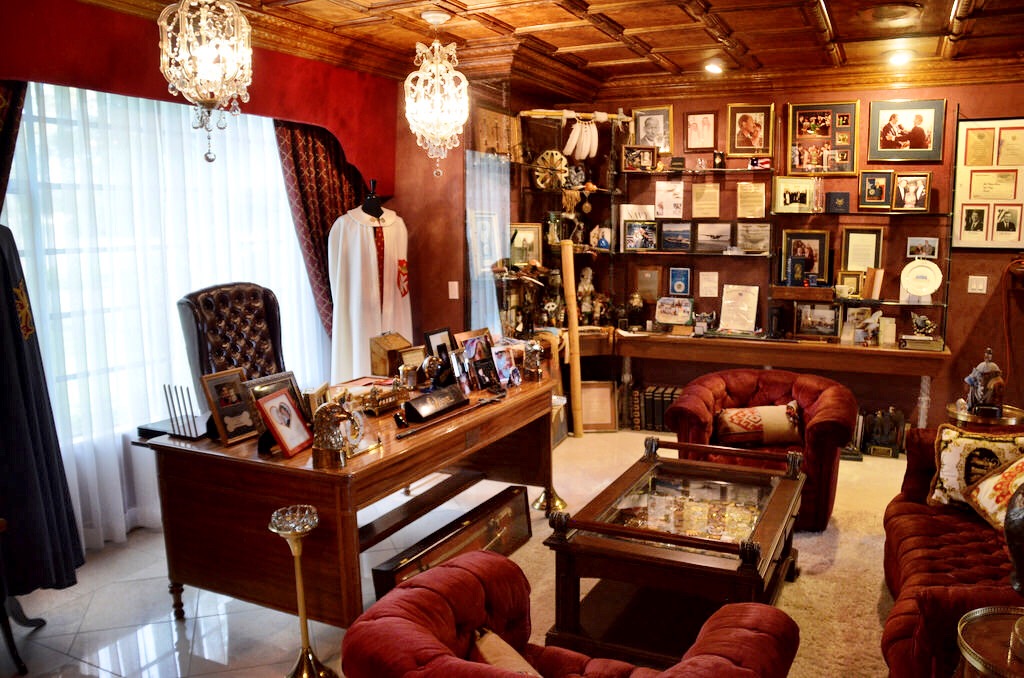 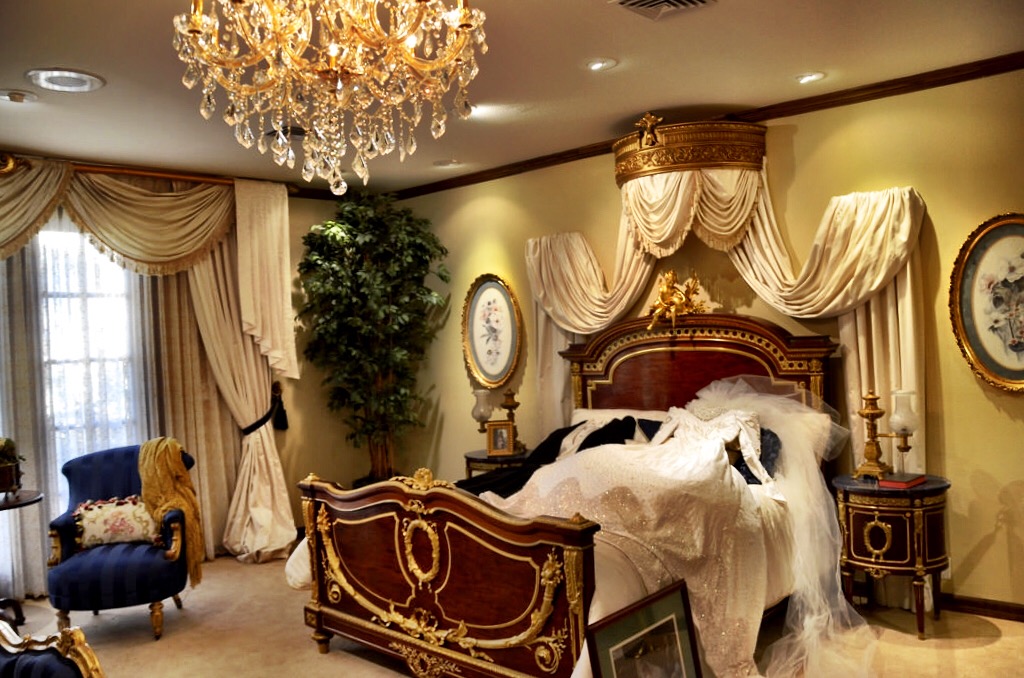 Touring the massive estate of Casa de Shenandoah doesn’t end with the house though, there’s also a small museum developed specifically for these tours that contains many of the awards Newton has received over the years, as well as letters and other important souvenirs from his life, including a massive car collection. Then there’s the plane. A Fokker 100 airplane has been restored and inside you’ll see how Mr. Las Vegas once traveled the country, with leather seats and enough room for everyone to be comfortable. For an aviation guy like myself, it was one of the highlights of the tour and put the exclamation point on the overall experience. 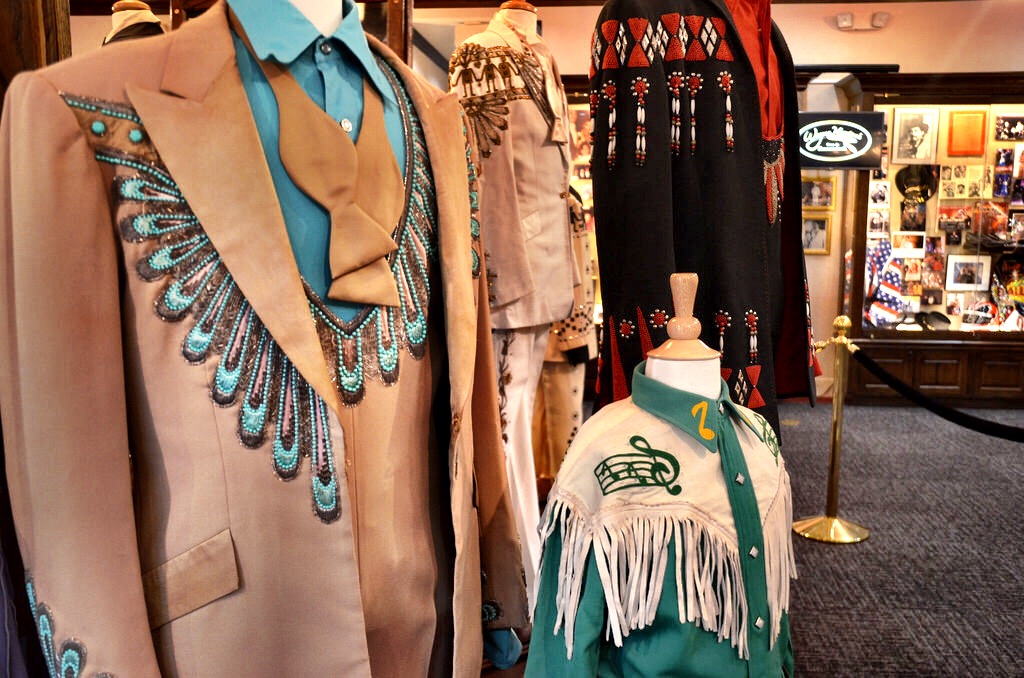 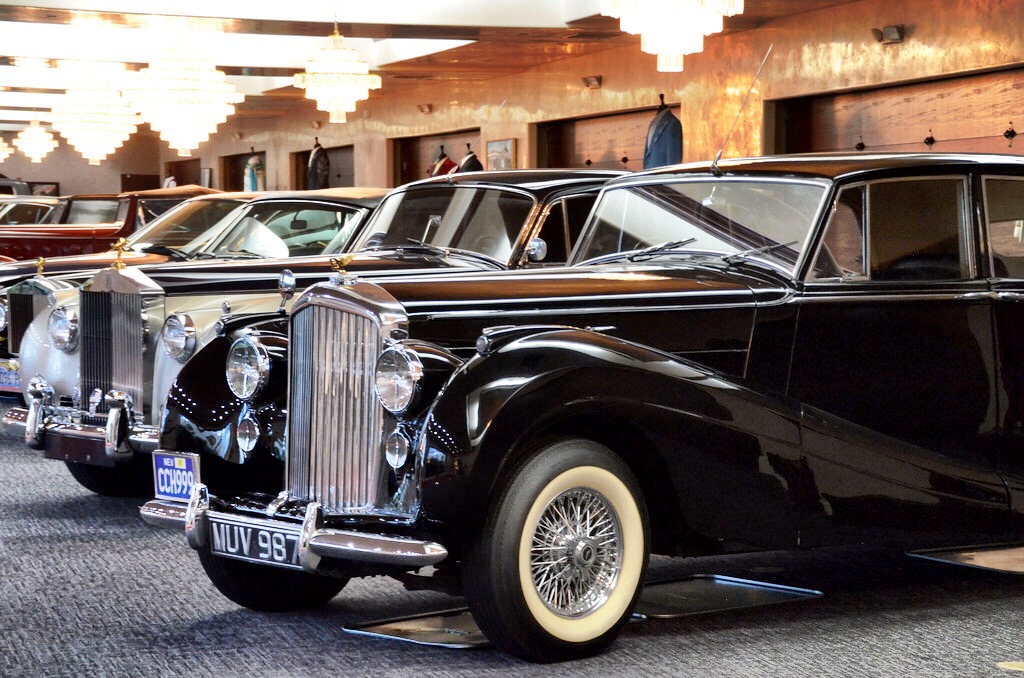 Leaving the estate I was embarrassed that my opinion of Wayne Newton had not been higher previously. He’s made some mistakes, sure, and he does personify an era of Vegas that has long since disappeared, but he’s also more real and down to earth than I would have imagined. He’s spent millions supporting Native American charities (he’s part Native American) as well as thousands of hours visiting US troops overseas throughout a variety of wars and conflicts. While Casa de Shenandoah is large, it’s an oasis in the desert and recreates a kind of pastoral calm that is usually found in Virginia and certainly not Nevada. The tour humanized Wayne Newton in a way I didn’t expect, making the entire experience much more enjoyable than I ever could have imagined and easily the best activity I enjoyed during my most recent visit to Sin City.

I had only enough time to spend an hour touring Casa de Shenandoah and I wish I had more time to see everything. While the ticket prices may be more than you’re used to, in Vegas terms they’re a bargain especially considering the fact that one could quite honestly spend hours strolling around and exploring everything. If you’re like me and bore quickly of the casinos and neon of the Las Vegas Strip, this is the perfect off-Strip alternative and just a wonderful way to spend an afternoon in always surprising Las Vegas.