I was most excited for my recent trip to Scotland because the itinerary included visiting areas of the country I had never been to before, including the incredibly picturesque region known as the Moray Speyside. Famous around the world as part of the Scottish Whisky Trail, I discovered that this rural area of Scotland has a lot more to offer visitors than just whisky. Traveling around the region in conjunction with the GREAT Britain campaign and UK Trade & Investment to learn more about the history and culture of gin, I naturally learned about much more than just the gin. In the process though, I discovered that everything surrounding the gin distilleries, including the natural landscapes and the history were just as important as learning about what botanicals go into which gin. Everything about this region of Scotland serves as the foundation for these distilleries, whether they produce whisky or gin or both and to really understand the beauty of these potent potables, you have to understand everything that makes Scotland tick as well. 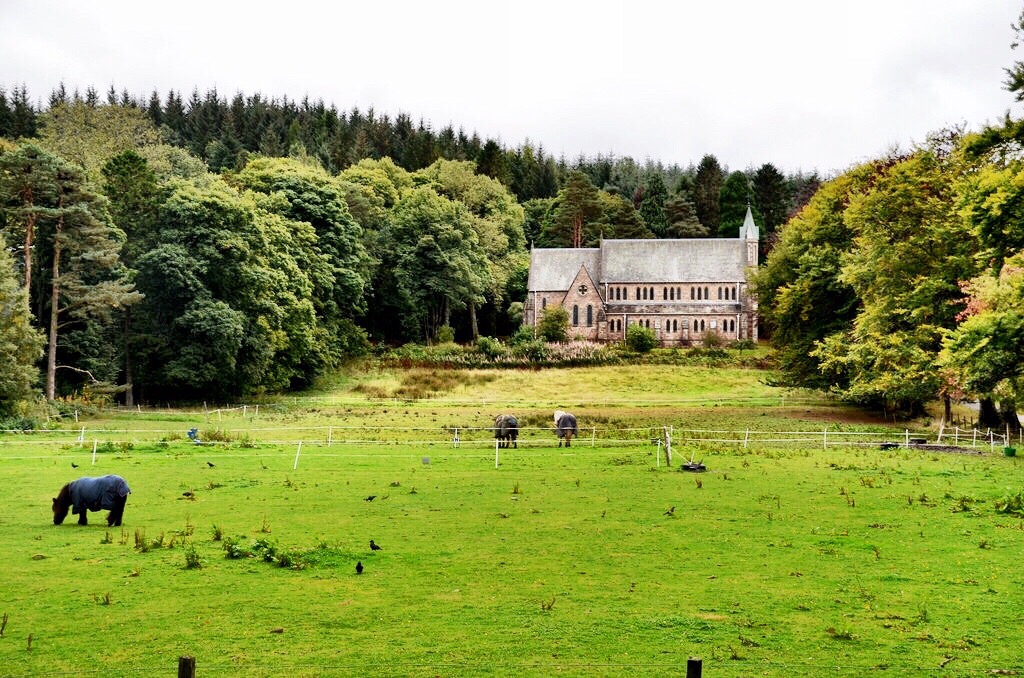 Let me preface this by saying that I have taken certain liberties with how I define the Scottish Malt Whiskey Trail and have included some stops and sights that may not be in Speyside, but which are close enough to visit. Scotland is ultimately not a huge country, so while the roads may be narrow at times, it is easy to get around and explore many areas of the Highlands without sticking to a strict route. One of the first areas I explored was the Speyside region, home to the proper Malt Whisky Trail and where you’ll find all of those famous distilleries you’ve previously only seen on labels in upscale bars. It’s also an incredibly picturesque area of the country, with small fishing villages, quiet coves and stunning country villages. It’s essentially what we all conceive Scotland to be like, down to the farms with fuzzy Highland Cows roaming around. 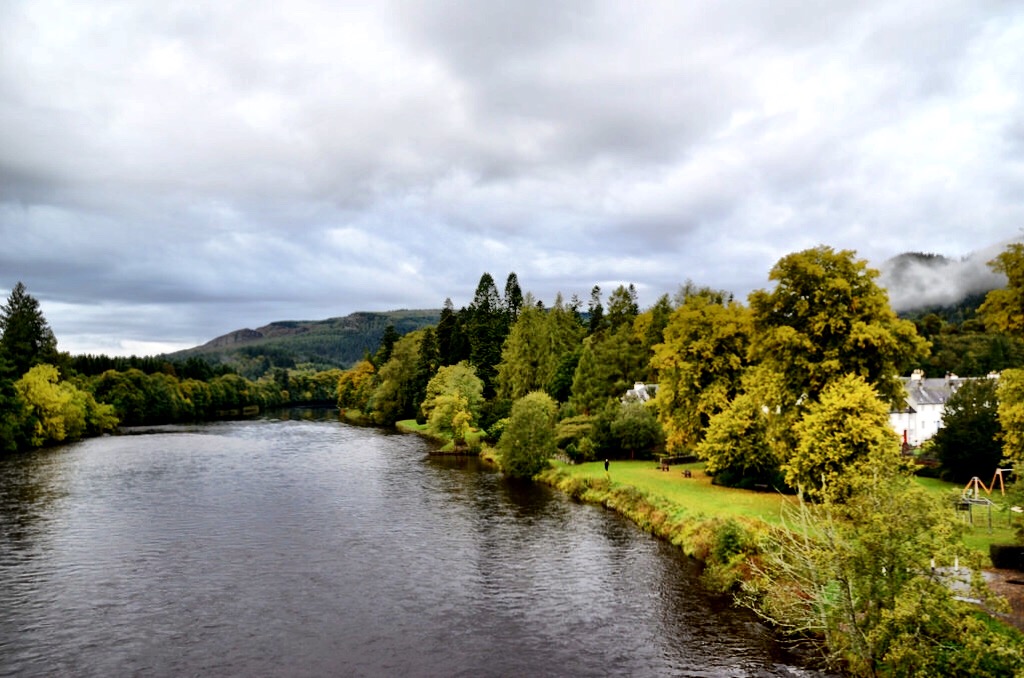 One of the best aspects to driving around Scotland in my opinion is the drive itself. In spite of fairly inclement weather, what the Scottish call dreich, I couldn’t help but marvel at the pastoral perfection I was simply driving past. Every movie you’ve ever seen featuring the Scottish countryside, whether it’s Highlander or Skyfall, all do justice to this amazing part of the world; it really is that beautiful in person. If you enjoy hiking or walking, be sure to add in plenty of time to do both, especially in Cairngorms National Park. Cairngorms is the largest in the UK and is actually bigger than the whole of Luxembourg. It’s also where you’ll find four of the five highest mountains in the UK as well as Scotland’s ski centers. In the winter months folks from all around the UK visit to take advantage of the downhill slopes, enjoying a winter outing without having to travel to Europe or further afield. No matter what you do though, remember that the countryside is a big part of understanding Scotland, its history and its people. All around you’ll find centuries old battle sites and monuments left by prehistoric man. It may not be a large country, but because of that size, historical and natural significance is everywhere if you just take the time to look for it. 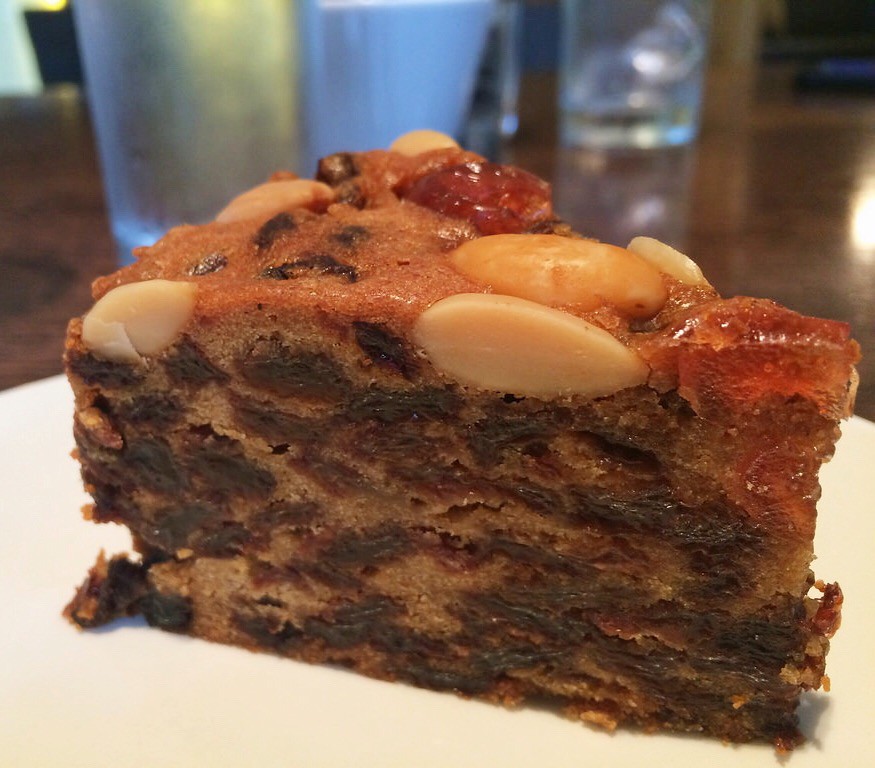 Both on and off the Whisky Trail there are plenty of great places to find a nice meal, whether it’s low-key or high-end. Believe it or not, one of the best meals I had in Scotland was at the Malt Barn Restaurant at the Glenfiddich Whisky Visitor’s Center. Glenfiddich has done a great job creating a state of the art experience for visitors, of which it sees hundreds of thousands every year. While I skipped the whisky tour I was starving, so I made a beeline for their restaurant curious what single-malt-inspired dishes they had concocted. The menu is obviously geared towards tourists and features many “classic” Scottish dishes and yes, you can even get haggis if you really want to try it. I decided to sample a twist on the Scottish Stovie. 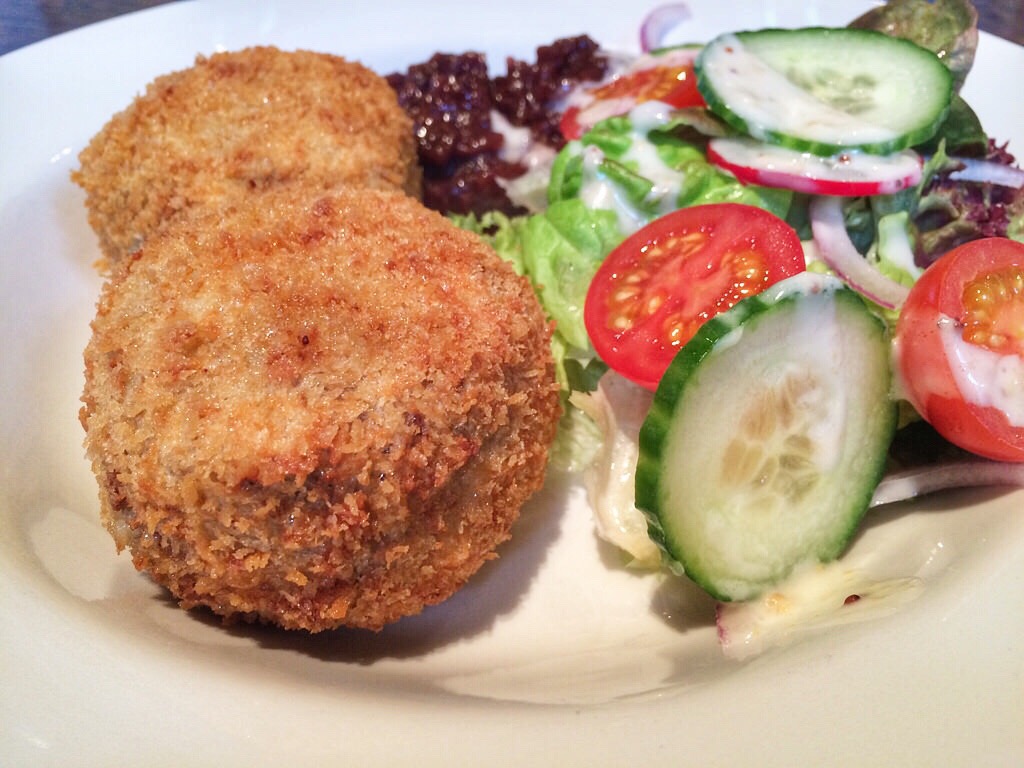 Usually just a simple stew served with oatcakes and beetroot, the chef at the Malt Barn served up a twist by creating a version baked and served within the oatcake itself. Delicious when paired with the beetroot, it was the tummy-filler I needed on a chilly fall afternoon. The dessert though stole the show – a Walkers Whisky Cake made with Glenfiddich whisky. Sort of like a potent fruitcake, it was the perfect ending to a great meal. 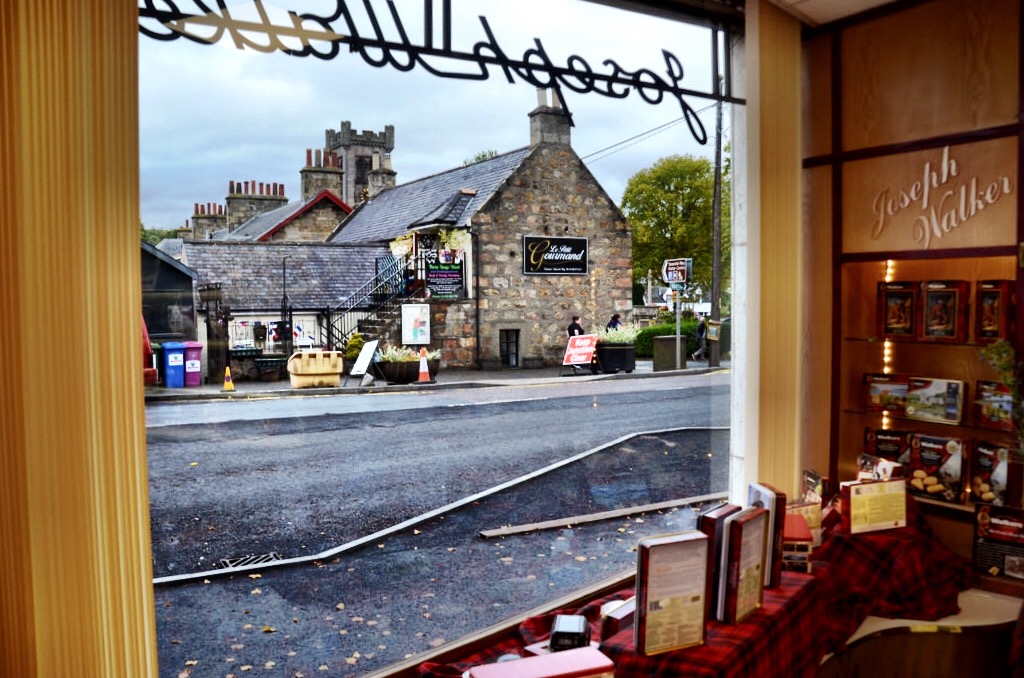 If you want more of Walkers famous shortbread, the company headquarters is just down the road in the small town of Aberlour. While you can’t visit the factory, in a small storefront on the main street running through town is the original shop where the Walker family first starting selling their now world-famous tea biscuits. It’s still where all new recipes are developed, so stop by and pick up some fresh samples before leaving town. 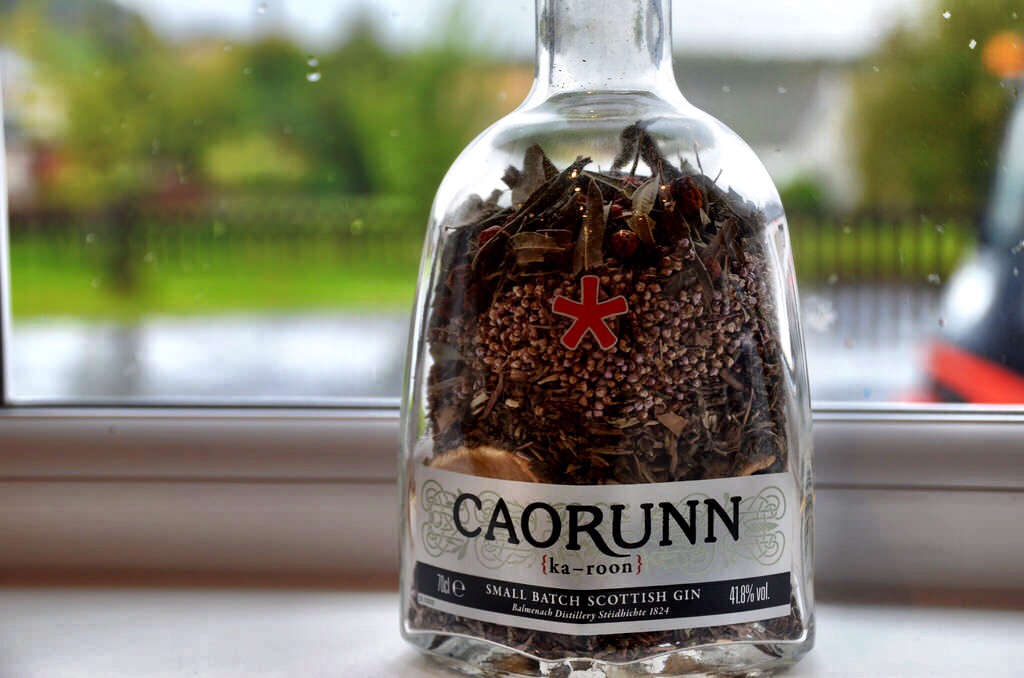 If you’re going to be on the Whisky Trail anyway, you might as well include gin with your tastings. Many distilleries produce both spirits for basic economic and business reasons. Whisky takes at least three years to age and many producers choose to let the single malts age much longer than that. Gin on the other hand can be produced, bottled and on the shelves within a matter of a few weeks, which means that from a business point of view gin is a great way to pay the bills while the whisky ages. At this time not many gin producers have opened their doors to visitors, not like their whisky producing cousins, but you can still find these great Celtic gins in most bars, pubs and stores. When you’re in Scotland, or anywhere for that matter, there are a couple that you should specifically look out for.

Calling the rolling hills of the Spey valley home, Balmenach distillery has been producing whisky and other spirits since the early 1800s, albeit in fits and starts. In the 1990s a change of ownership occurred and this long-lauded distillery went dormant, until recently when new owners decided to bring back this traditional distillery. In addition to their whiskies, they also produce what they call a Celtic gin – Caorunn. The art and science of gin rests in which botanicals the distiller decides to use, and with Caorunn the influence is from the surrounding landscapes they call home. Handpicked from the nearby area, they come together to make what is one of the most classic Scottish gins on the market. 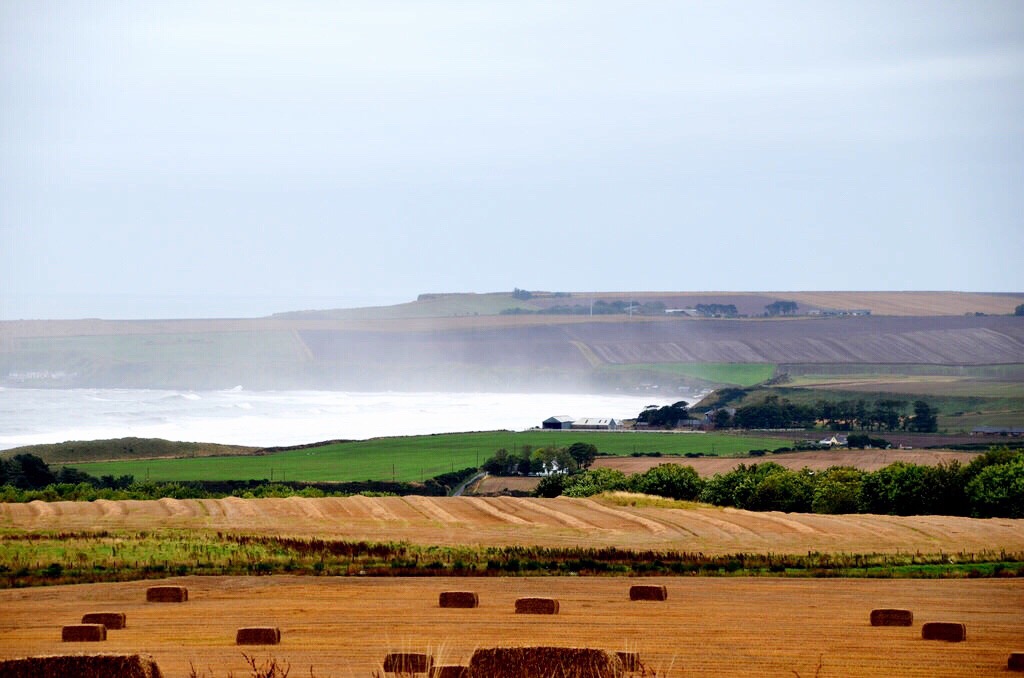 Not too far from Speyside is the area known as Perthshire, the so-called gateway to the Highlands. Located alongside the rugged cliffs of Scotland is a rarity in the gin world, a single estate distiller – Arbikie. Fourth generation potato farmers, this newish distillery makes whiskies, but they also produce a fine gin named after the Master Distiller herself – Kirsty’s Gin. It’s distilled using carefully selected botanicals also local to the surrounding countryside, imbuing the floral and salty coastline into every bottle. 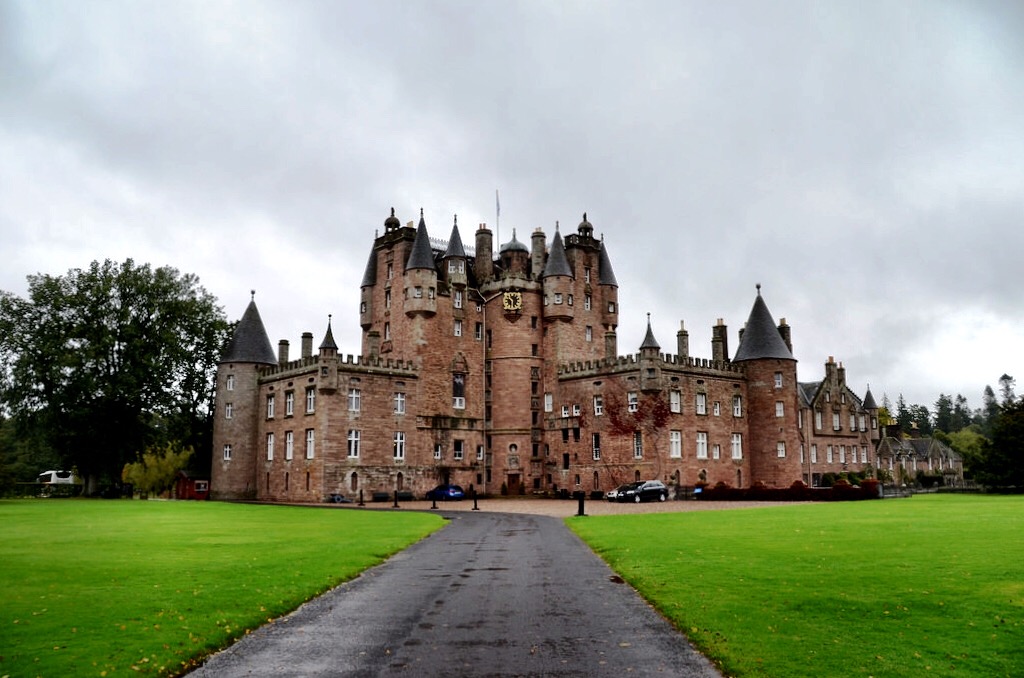 It’s hard to travel anywhere in Scotland without stumbling upon a castle, and one of the most popular has to be the massive Glamis Castle. Often called Scotland’s most beautiful castle, Glamis has long been linked with royalty and most recently it was the childhood home of The Queen Mother. Although a castle has been on this site for many centuries, the massive structure I saw as I drove down the long lane leading up to it was mostly built in the 17th century. Regardless of when it was built, there’s certainly no denying its beauty. Literature buffs may remember it as the home of Macbeth, and while the historical figure never lived here, another king – King Malcolm – was indeed murdered here in 1034. There are a lot of stories associated with the castle though, many of which you’ll learn about when you take the official tour. Before heading off with the tour guide though, make sure to spend some time exploring the gardens and the perfectly maintained grounds, which are also home to the castle’s own herd of Highland cows. This ancient breed of cattle is the de facto symbol of both Scotland and the Highlands, and this will probably be your best chance to take some great photos of these fuzzy and docile animals. 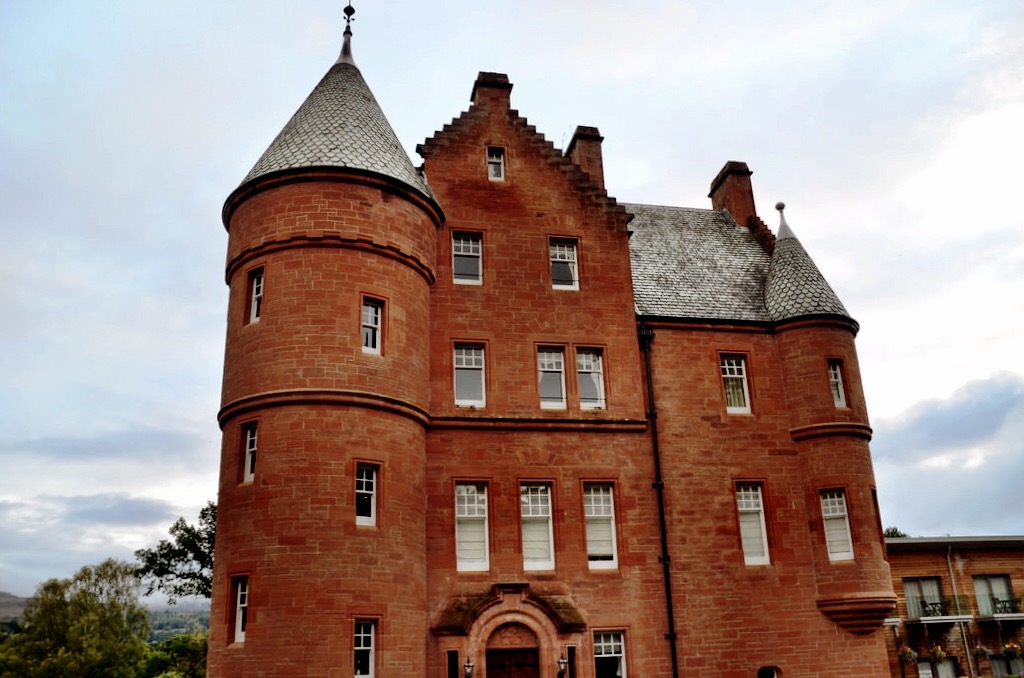 Spend the night in Fonab Castle

My final stop in this region of Scotland was at another castle, but instead of sightseeing I was there to spend the night. Overlooking Loch Faskally, Fonab Castle Hotel is one of Scotland’s newest 5-star hotels and one of the best places to spend a relaxing night out in the country. Whether it’s in the original baronial castle itself or in one of the modern annexes, each room at the castle has been designed with luxury and attention to detail in mind. I love a great luxury hotel and am fairly picky, but could find little wrong in my massive suite in one of the newer, more modern rooms in the lakeside annex. Soft linens, Mugler toiletries and even a Nespresso coffee machine all ensured a relaxing stay that I honestly didn’t want to see end. Deciding I was too tired to go out and explore the nearby town of Pitlochry that evening, I decided to eat at the Fonab Castle restaurant and it was one of the best decisions I made all day. Drawing upon traditional classics but served up with surprising modern flair, I left the restaurant that evening full and content.

Ultimately, no matter what you decide to see and do along Scotland’s Whisky Trail, I know that the experience of driving around the rural countryside with make you fall in love with this country as much as I did.

2 thoughts on “Surprises On The Scottish Whisky Trail”