It’s hard not to be happy in France, at least it’s hard for me not to me happy in France. One of my first travel loves, it’s a country I always enjoy returning to and that’s especially true when I get to explore towns and cities completely new to me. That was the theme of my river cruise earlier this year through parts of Provence and Burgundy I hadn’t seen before, but one in particular surprised me for all the right reasons. The last port of call on my Uniworld luxury river cruise, Lyon quickly became one of the stars on what was truly a star-studded trip through France.

I’ve written a full review of my experience with Uniworld, but what I enjoyed perhaps most was not only the freedom we had at every stop to do whatever we wanted, but also the active options made available to us. In Lyon there were a couple of different active options including a bike tour through the city and a long walking tour, taking in various sights of the city over the course of 2-3 hours. Since it was my first visit I went with the walking tour and soon discovered a city that doesn’t get nearly enough attention as it should. 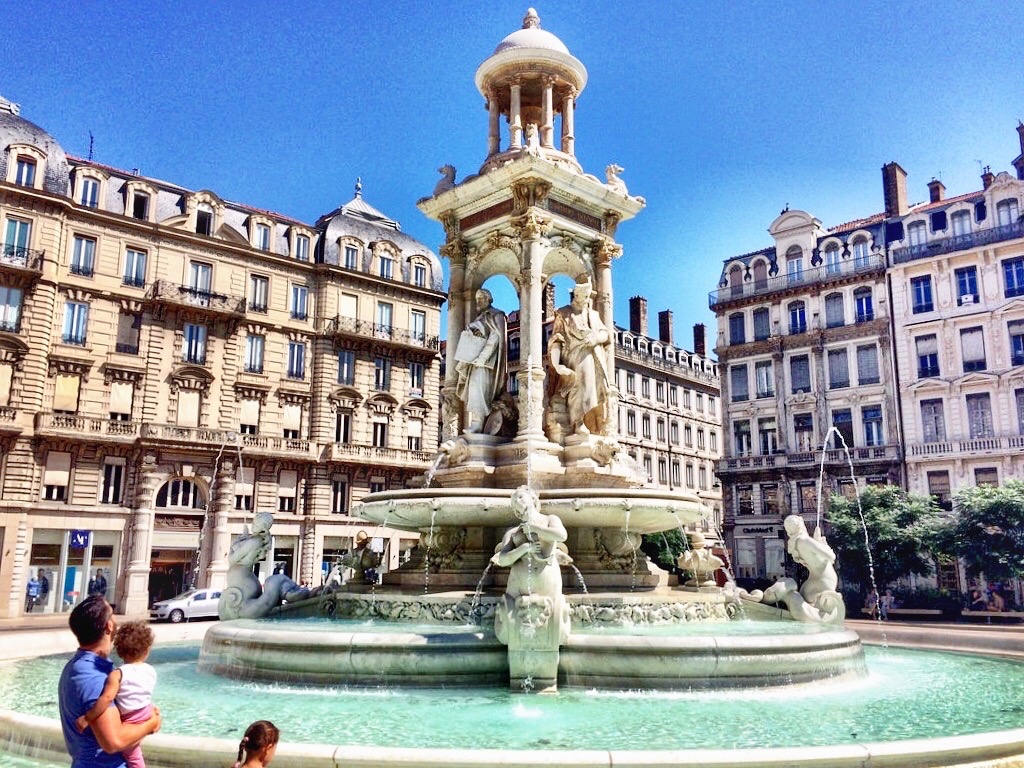 France’s third-largest city, it is usually called a Little Paris, much to the chagrin of locals I’m sure. But it’s a feeling I understood as I walked along the banks of the river and admired the perfectly symmetrical houses lining the promenade. The city’s architectural beauty reminded me of Paris and is a far cry from the chaos of Marseilles, a city I disliked almost instantly. After the walking tour offered by Uniworld, I spent the rest of my day just wandering around, sightseeing, people watching and of course eating and by the end, it was the best day of my cruise through France. I hadn’t expected that. I had expected another Marseilles, but Lyon was different. Lyon has a style and soul not unlike Paris, a sense of self that I discovered through a few key moments. 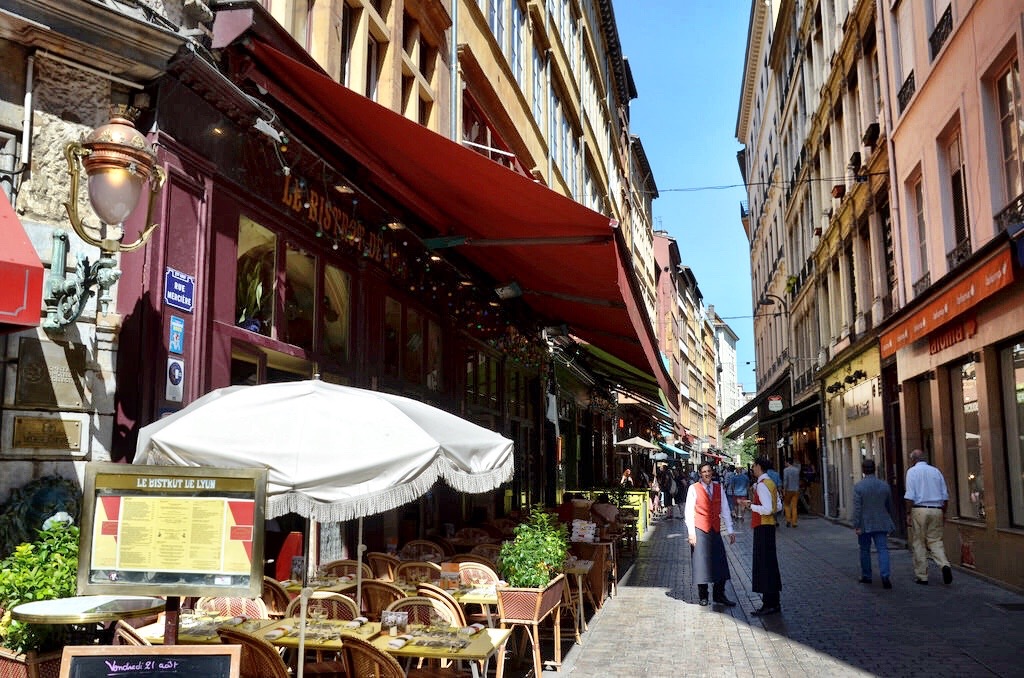 Lyon has come to represent the spiritual heart and soul of French cuisine, which is saying a lot in a country obsessed with food and drink. Not only has Lyon led the modern culinary movement through the likes of acclaimed chef Paul Bocuse, but they have a rich tradition of classic foods that are simultaneously unique but also decidedly French. At the end of my walking tour I took the guide aside for a moment and asked her what she thought some of the most classic Lyonnaise dishes were. She didn’t hesitate and rattled off a whole host of foods, giving me more than enough information to create my own perfect lunch experience in Lyon. Finding a good café in Lyon isn’t exactly a challenge; they’re everywhere. Be sure though to avoid those lining the central tourist areas and instead veer off the path and look for smaller cafes with only a limited number of tables and an even more limited menu. No restaurant can do it all and if they say they can, they’re lying and are just there for the tourist trade. In Lyon these small, traditional restaurants are called a bouchon, and they’re even marked on their windows as belonging to this traditional collection of eateries. Wandering through the foothills of the Croix-Rousse hill, I found several streets littered with bouchons including the small one that I decided was perfect for my Lyonnais food experience. Feeling confident after a week in France, I resurrected my French skills and ordered what I thought to be a classic meal in Lyon: a salade lyonnaise followed by a massive saucisson chaud served with potatoes. Not only was this a good lunch, it was my favorite meal of the entire trip; but what is it exactly? 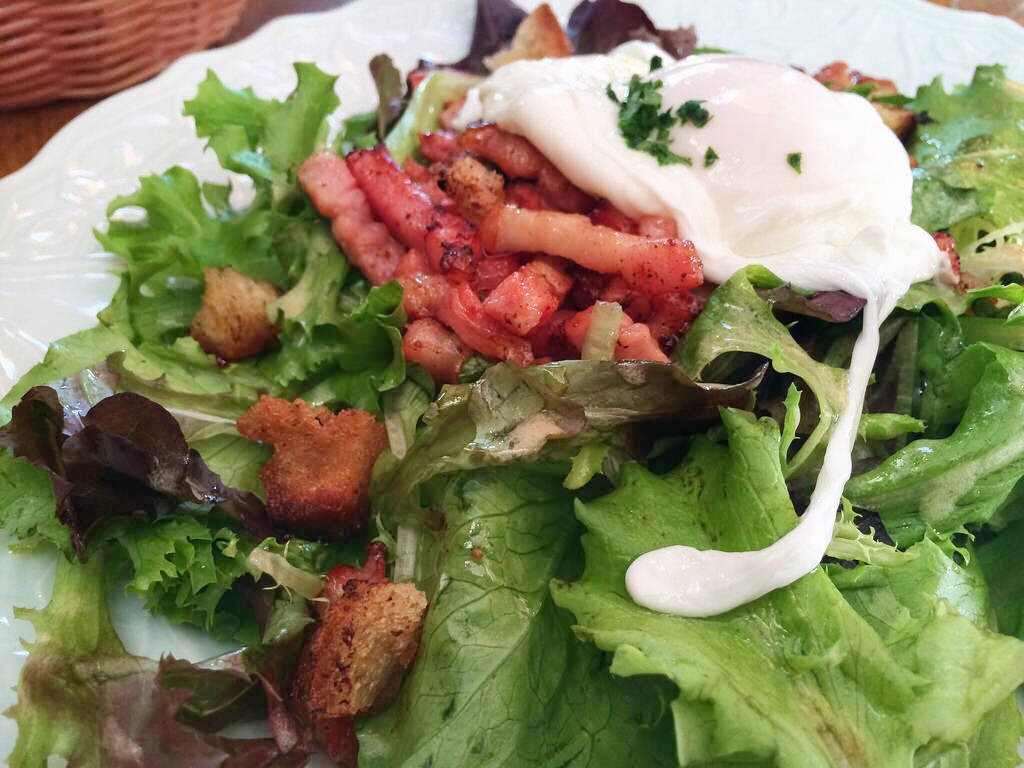 A traditional salad in Lyon is a beautiful creation and is made using a mixed green salad served with croutons, lardons (bacon strips) and a perfectly poached egg on top. When sliced, the egg oozes over the salad creating a rich but delicious dressing. Salads in Europe are usually an afterthought, but this was something different. This was heaven on a plate; I mean how can you go wrong with bacon and egg in a salad? Saucisson just means sausage, but a great dry French sausage is unlike anything else I’ve ever had anywhere else in the world. In fact, it’s long been one of my favorite meals and since I was 17, enjoying a picnic lunch of saucisson sec on a buttered baguette has been a tradition for me whenever I’m in France. But a warm version served with a red wine sauce and a side of potatoes was a variation I’d never enjoyed before, and sitting outside in the warm summer sun, people watching as I ate a rich but delicious meal was pure heaven. There’s not much that I enjoy more than a leisurely lunch at a sidewalk cafe and was a major reason why my time in Lyon was so special. 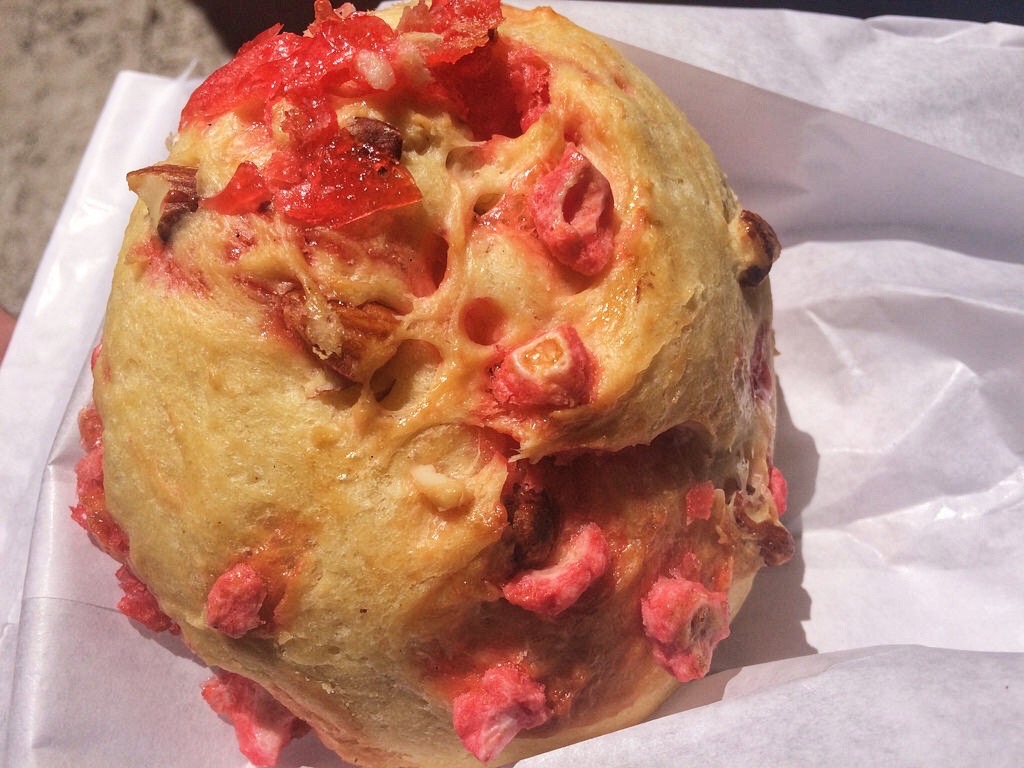 I purposefully skipped dessert at the bouchon, and not just because I was too full to move – which I was. No, I had seen a number of bakeries as I toured the city earlier in the day and having a fierce love of sweet pastries, there was one thing I wanted to try. Around Europe, almost every region has a special pastry that it all theirs; a variation on something else or a tasty bite that’s totally unique. Pralines, made from almonds enrobed in cooked sugar and pink food coloring, are a specialty of Lyon and you can find them everywhere and in nearly every form imaginable. One that caught my eye in particular was a praline brioche, which is simply a delicious brioche covered with pralines. Sticky and sweet, it was the perfect guilty treat to finish out my traditional Lyonnaise food experience. 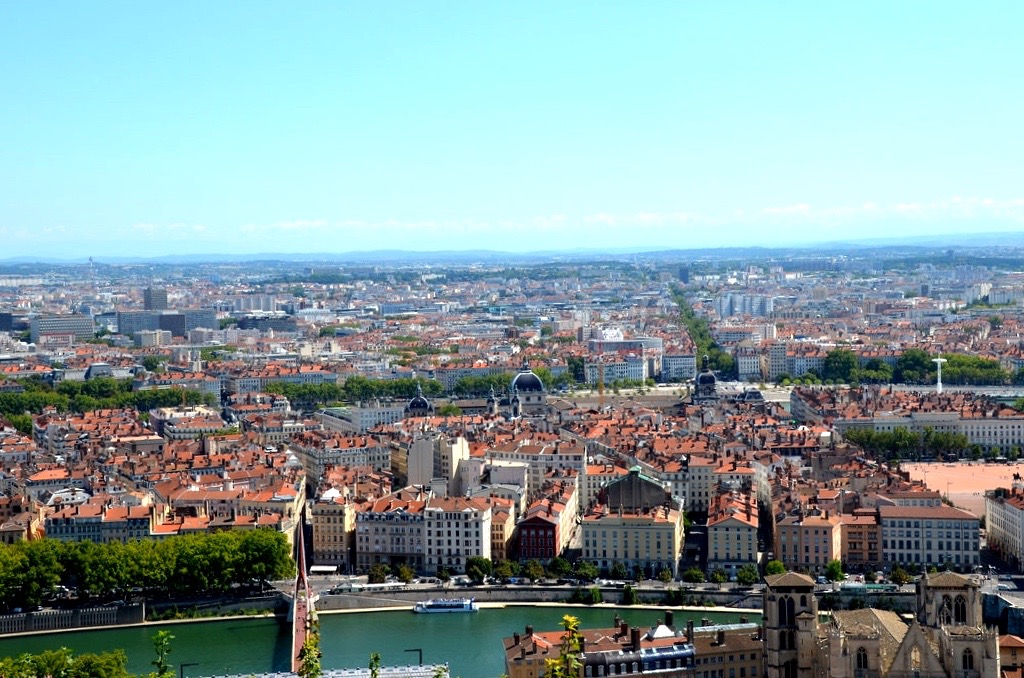 Architecture, traboules and the views

It may sound simplistic, but Lyon is just a really lovely city and sometimes that’s enough. At first led by a tour guide and then on my own, I was surprised at the delicate architecture I found on almost every street. It reminded me of the architecture of Haussmann’s Paris with wide avenues, parks and squares. 19th century mansions line both the Rhône & Saône Rivers and deeper in the heart of the city, delicate homes and business from a variety of centuries coexist peacefully. I could have spent days just walking around and looking up, admiring the design and style that the city exudes at every step. There’s of course more to the city than pretty buildings, and one little quirk of history that I found most fascinating were the traboules. 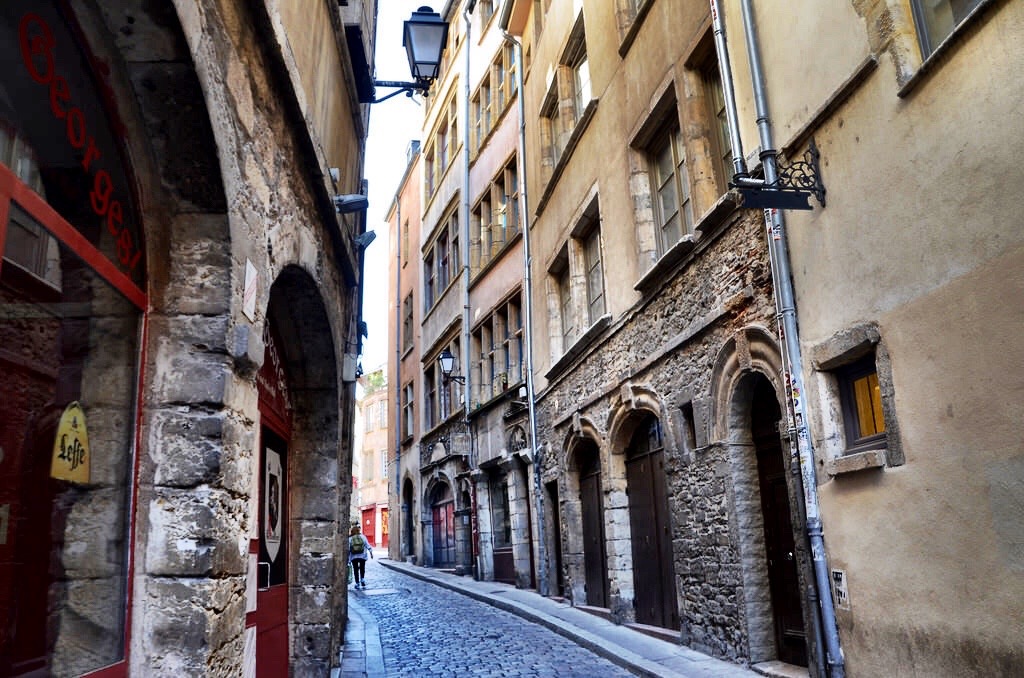 Simply put, traboules are passageways that connect buildings to each other, urban shortcuts of a sort. They’ve been around forever and originally were an easy way for the silk manufacturers and other merchants to transport their wares down to the river quickly and without ever having to go outside. They’re secret passageways that create a hidden labyrinth to the city, really known only to locals. During World War II they were essential to the Resistance Movement and are credited with preventing the Germans from taking total control of key parts of the city. Though many are today closed off, a number are still open and available to the public to see and wander through. A good guide is necessary to find them, since they mostly wander through and under apartment buildings. 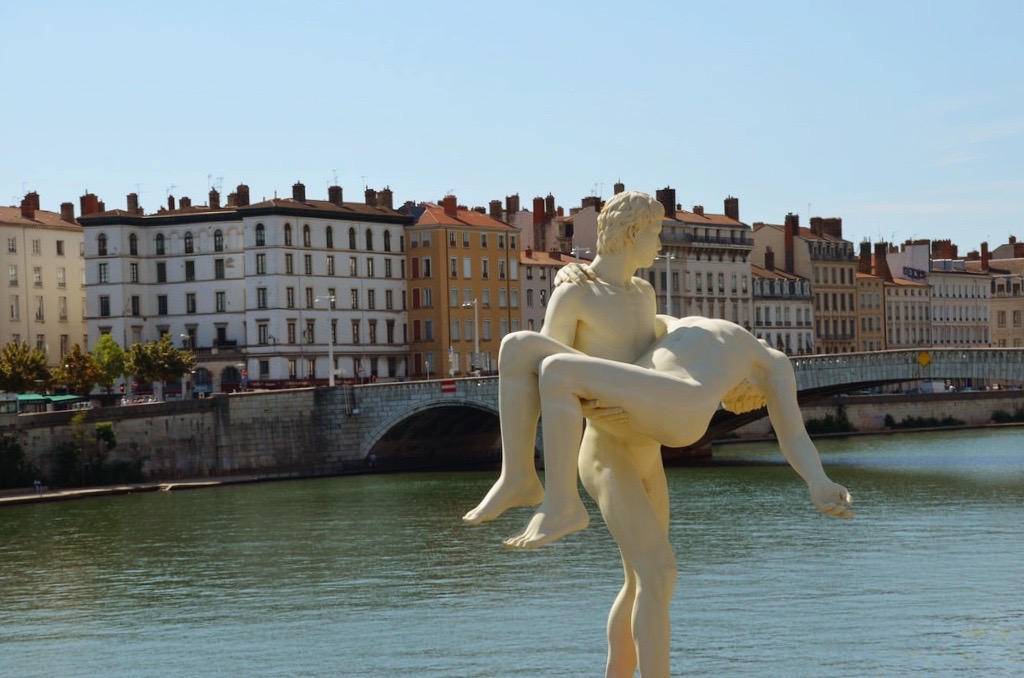 This sounds like a travel blogger cop out, but it’s true when I say that Lyon possesses a certain intangible quality, a soul that makes it special. At least that was my experience as I spent every second of my time in this large city out and about, exploring and learning as much about it as possible. From the hidden traboules to the Basilica of Notre-Dame overlooking the entire city from the top of Fourvière hill, I saw as much of the city as any person could reasonably do in one day and loved everything that I saw. Aside from the city’s beauty though, it has a certain confidence that is nice to experience. It’s almost always been a prosperous city, although the meaning of that has changed over time. But in general, the people of Lyon are happy, healthy, educated, well employed and enjoy a high quality of life. That in turn has created a city that enjoys all of those attributes and more. Any city, no matter where in the world it is, is a direct reflection of its people. The citizens create their home in their own image, and in Lyon that means a city that isn’t just driven to succeed, but which also understands the importance of enjoying life. And it’s the latter that I partook in that wonderfully sunny day; enjoying life in what surely must be one of the France’s most underrated cities.

Have you been to Lyon? What did you think?

5 thoughts on “My Perfect Day in Lyon, France: A Few Reasons To Love the City”