A couple of years ago I wrote a post chronicling my favorite food moments from my travels. Food is I think the most important aspect of the travel experience. It’s through food that we learn the most about a new culture, that we literally taste what they value and hold dear. It’s also our strongest memory; we’ve all been transported to another country just from a simple smell or taste. Food is a common travel experience for all of us, no matter if we’re billionaires or backpacking college kids. With that in mind, I want to share a few of those travel food moments that have been the most important to me. This list is not meant to replace my original list I wrote back in 2013, far from it. No, instead it’s meant to augment it and over the years, I’ll hopefully have a nice list of food memories so important that they will have come to define entire travel experiences for me.

I could (and probably should) write an entire post just about my favorite foods from Asia, but this one in particular is important to me on a very personal level. Food is inextricably tied to memory, and it’s because of that that I have to choose this dish in Bangkok, not only because it’s delicious but because it means so very much to me. Located on the mighty Chao Phraya River, near Thewet Pier, is one of my favorite establishments in Bangkok, the In Love Restaurant. I’ve been each time I visited the Thai capital and thankfully not much has changed. One of the best features of the restaurant isn’t only the food, it’s the view, especially at sunset. Sitting there watching the sky explode in hues of purple and pink as boats race along the busy river captures for me what Bangkok is all about. Fortunately the food is good too. My go-to dish is a simple one, crispy chicken with basil. The combination of flavors isn’t just delicious but exemplifies Bangkok for me, and that’s why it’s so special. I luckily found the recipe and now make this at home all the time, somehow capturing the delicate flavors of Bangkok if only for an evening.

Europe is probably my favorite foodie destination and I love so much of it, from fresh pastas in Italy to pintxos in Spain and pastries everywhere. But when I think about the one dish I have always enjoyed the most, I have to say that the classic Weiner Schnitzel is my favorite meal in Europe. This is one of the most touristy meals out there, but it’s famous for a reason – it’s delicious. Sure you can find Wiener Schnitzel (which means schnitzel from Vienna) just about anywhere, but when you’re in Vienna one of the best places to enjoy this traditional delicacy is at Figlmüller’s. Located near St. Stephen’s, the chefs at Figlmüller’s have been creating some of the best versions of Austria’s national dish since 1905; so it’s safe to say they know what they’re doing. The schnitzels are made from the best cuts of pork and extend well past the edge of the plate – a massive 11 inches in diameter. Still, I found myself devouring this classic dish in no time; it was light, crispy and delicious. You can enjoy schnitzel anywhere, but be sure to try it at Figlmüller’s who really can be credited with transforming this popular dish into the culinary event it is today.

Like so many other foods in the Middle East, knafeh is pan-Arab dessert that can be found throughout the region. Knafeh is made using very fine vermicelli-like pastry that is heated with butter before a soft, white cheese is spread over it. The process is repeated a few times and then the dessert is topped with sticky syrup and some crushed pistachios. An unlikely combination, but it quickly became a personal favorite.

At first I wasn’t sure, I haven’t had great experiences with global desserts, but I decided to be polite. I watched the cooks make the sticky concoction and gave my best fake smile when they handed me a plate. I went off to the side and sat on a half-wall as I closed my eyes and took a bite. Perhaps predictably, I loved it. It was a cool day and the steaming hot knafeh was the perfect remedy. Sure it was sticky, but the pasta and cheese combined to make a delicious snack. I gobbled it up and looked around, expecting stares but instead found myself accompanied by scores of others enjoying the dessert as much as I did.

As a proud Southerner, I can say without hesitation that a great BBQ meal is probably the meal I’d ask for on my deathbed. It’s delicious, but it’s also consoling. BBQ has a soul that not many other foods possess; it exists not just in textures and flavors but also in a range of emotions. BBQ differs widely around the country though, from sticky Kansas-style to Virginia’s ketchup based sauces and of course the vinegar that makes North Carolina so famous. I always considered myself a Virginia BBQ guy, until a recent trip to North Carolina introduced me to some of the best pulled pork I’ve ever enjoyed. In North Carolina, BBQ involves a whole hog that is slow-cooked to perfection over a massive pit for a period of many hours, infusing that great smoky taste into the meat itself. Where I’m from in Virginia, we would add a thick, ketchup-based sauce to the pork or chicken but that’s not how it’s done in Eastern North Carolina. No, instead there it’s all about preserving the taste of the meat itself, adding only vinegar, maybe some hot sauce, salt and pepper and that’s it. The best example I found during my romp through North Carolina was at the Skylight Inn, in Ayden, North Carolina. The meals are served with the choice of sandwich or full meat platter along with coleslaw and cornbread. But that’s it. No fries, beans, hushpuppies or anything else that I’m used to when eating a great BBQ dinner. But after my first taste I realized that nothing else was needed – the meat was that good. Slightly charred bits of meat mixed in with the succulent and woody pork all combine to create what was honestly one of the best BBQ experiences of my life. 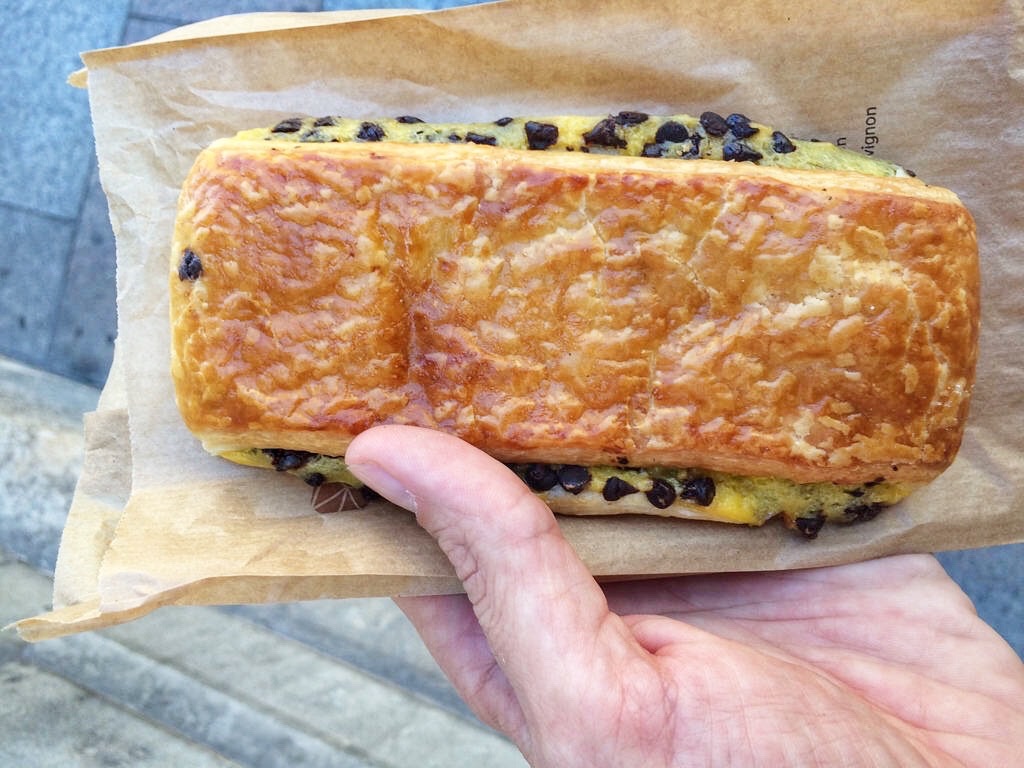 I first saw them in a train station in Brussels. We were about to hop on a train to spend the day in Venice and needed a quick breakfast. Always with a keen eye for chocolate, I saw the elongated pastry and was curious. Eschewing my normal order of a chocolate croissant, I decided to try it and a new love affair was born. Turns out the Pain Suisse, translated to mean “Swiss bread,” is a very popular pastry not only in Belgium and France but around Europe. It’s also fairly simple, it’s just a long pastry filled with cream and chocolate but for me it has come to define being in Europe and especially France. We all have certain traditions when we travel, and for me finding my first Pain Suisse of the trip means that my journey has truly begun; that I’m in a new and foreign place and for me it’s a very exciting feeling. Plus the snack itself is amazing; after all it’s hard to go wrong with a chocolate filled pastry.

What are some of your favorite travel food moments?