Maybe it’s from having spent my college years in Williamsburg, Virginia, but I love American colonial history. At least I thought I did; I recently visited an important colonial American town, but one I knew very little about before visiting. Located along the Albermarle Sound in North Carolina, Edenton has a long history, but it’s much more than just some old buildings as I learned when I spent the day exploring what has been called many times, one of America’s prettiest small towns.

Today, only about 5,000 people call Edenton home, preferring to keep the secret of the town’s beauty to themselves. People have always been attracted to this area on the water though. Edenton began life in 1658 when some members of the Jamestown colony drifted south, establishing the first permanent settlement in North Carolina. Over the centuries Edenton has been a lot of things, from the capital of the colony to serving as the site of an important early step in women’s history. Today, the leafy trees offer shade to those houses and parks where all of these events, and plenty more, took place.

Walking through the small downtown core of Edenton, it’s hard not to feel beguiled by the town’s charm. It feels like a movie set, a scene showing a rose-colored look at American life that doesn’t exist, except that it does. Small restaurants, a soda shop, boutiques and more all line the main street leading down to the water. And it was along the water where one of my special moments occurred. 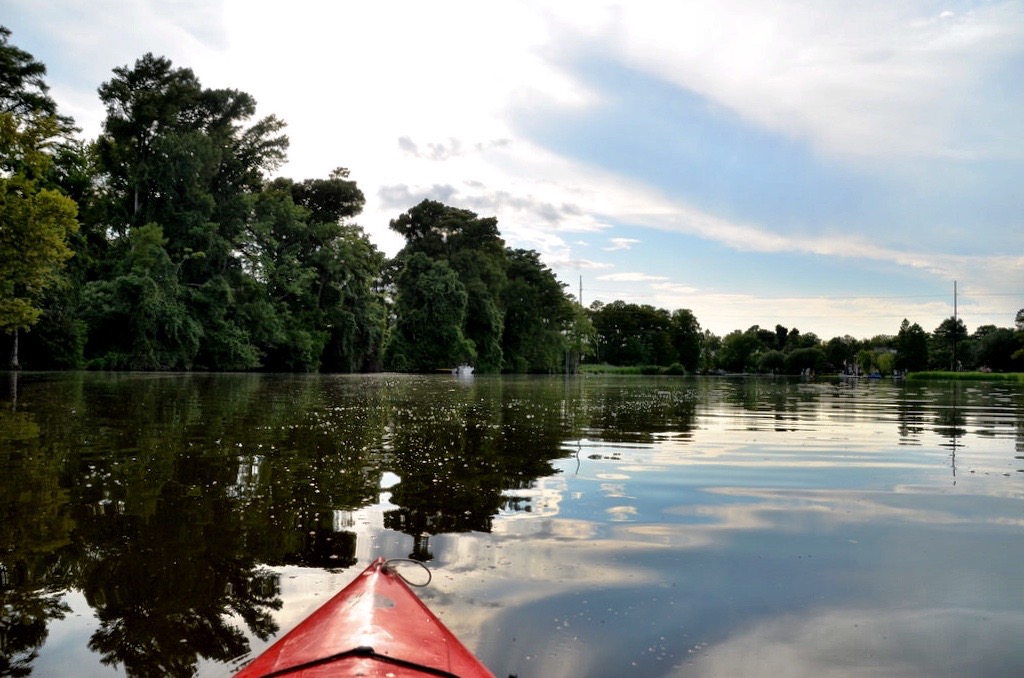 I’ve written about this many times, and I imagine that I’ll write about it many more times, but there is nothing better than experiencing new destinations from a different point of view and my personal favorite is from the water. Luckily, in Edenton that’s an easy feat to accomplish thanks to its location right on the sound. Water has naturally always been an important part of life in Edenton, but today it’s the recreational side that most people enjoy. The city has a kayak and SUP rental program, which means that any visitor can take to the water easily and at a very low cost. That’s exactly where I found myself in the late afternoon, as the sun had started to set in the distance. Kayaking in particular is a favorite activity of mine; it’s always fun to burn off a few calories when we travel and this is probably one of the most enjoyable ways to do just that. Passing from the docks, along the shore I indeed did see a different side to Edenton, one that was even more beautiful than on land. Houses well placed to take advantage of water access and small docks manned only by chairs designed to be the perfect spot for a sundowner. People were fishing from the small bridge and for the 100th time I thought I’d entered into a Twilight Zone episode featuring a Rockwellian existence that simply shouldn’t exist. It was a special afternoon and one that secured my love for this funny little town. 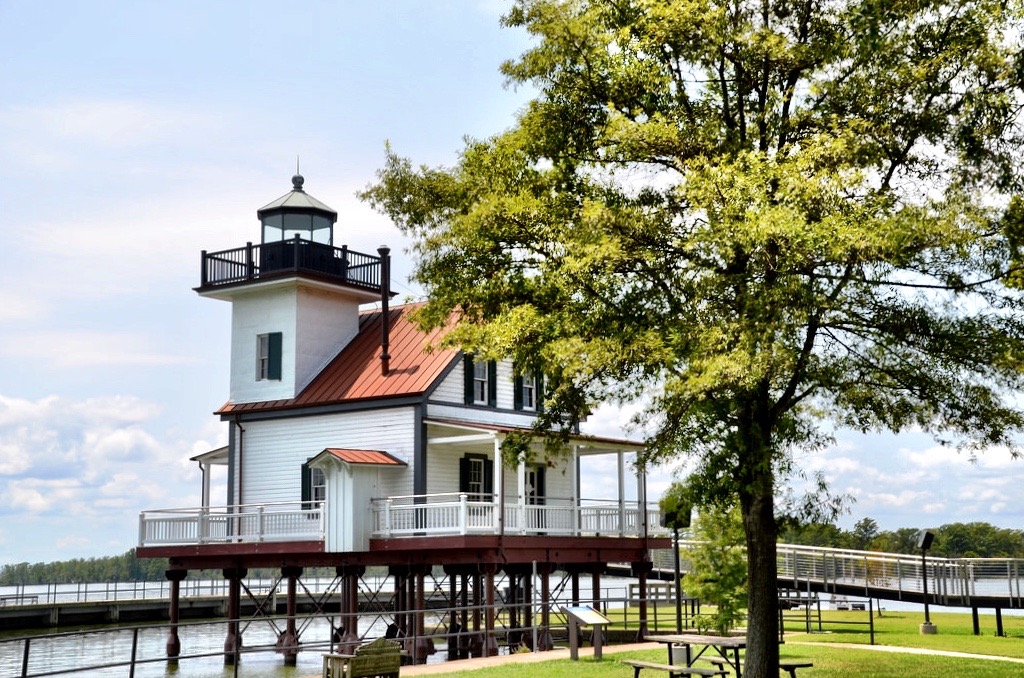 Along the water it’s impossible to miss the town’s most prized landmark, which is also one of its newest. The Roanoke River Lighthouse is a 19th century river lighthouse, of a design that many of us have never seen before. That’s because very few others, if any, exist anywhere else in the country. After the Coast Guard decommissioned them in the 1940s, most were dismantled or otherwise destroyed but the Coast Guard had a policy that if you can move it, you can have it, which is what one Edenton resident did. Transporting it several miles from the mouth of the sound to a location along the Edenton shore, it served as a house for a number of years before becoming a part of the community itself. Painstakingly restored, no one lives there today, but you can tour it and see what life was like for those 19th century light keepers.

Edenton is old, very old, and unlike so many other early American towns, we can still see many of the original houses lining those leafy avenues. These tranquil neighborhoods are perhaps the town’s greatest asset and arguably are what draw more visitors than anything else. So many other destinations have recreated homes and buildings, but here in Edenton they’re the real deal, oftentimes owned by the original families. Through these impressive, classically southern abodes you get a clear sense of the various decades through which the town has languidly passed; colonial to the modern era. Sure, the town has grown and changed over the years, but it’s also respected its past and it’s that past which I think forms the heart and soul of this lovely community.

Southern hospitality is so well known that it should be enlisted on the UNESCO rolls of our intangible world heritage. Throughout my road trip around North Carolina, I was always met with extreme kindness and open arms, but even more so in Edenton. Strangers, people I didn’t know, went out of their way to help me learn about their little community, the pride for which was clearly etched on their faces. Much to my surprise, nearly everyone I spoke to was from Edenton, born and bred like countless generations before. That’s another rarity in today’s world when most young people leave small towns to find jobs in larger cities. That happens in Edenton too, but not nearly to the same degree as other communities I’ve visited. There exists here a shared understanding that they live in a very special place, a town that really shouldn’t exist at all but not only does it exist, it thrives. Through rough economic times and more, Edenton has always stood tall and it’s thanks to this esprit de corps I think that this has happened. My visit there wasn’t just pleasant; it was an honor to experience such an unusually lovely place for myself.

There are a lot of reasons to love America’s prettiest small town, but for me it came down to a series of moments, pauses in time that coalesce to create a special memory of an exceedingly special town.

9 thoughts on “Four Special Moments in Edenton: One of America’s Prettiest Towns”