As a Virginia native, the concept of great BBQ is not a foreign idea. I grew up eating and loving a well-done BBQ meal, whether it’s the saucy (with ketchup) Virginia style, ribs or something entirely different. For me, North Carolina has always fallen into that ‘entirely different’ category and it wasn’t until a road trip around Eastern North Carolina when I learned more about this regional preparation and how very special it really is.

BBQ is a tricky concept for Americans and definitely for international visitors to our shores to fully understand. When we say BBQ we mean smoked, slow-cooked meat, many times over a pit, that has sauce or rubs or some other spice agent added to it. Where you live in the US changes the definitions but in Eastern North Carolina, locals have a very clear idea of what BBQ means to them. In towns like Edenton, Ayden or Kinston, North Carolina, BBQ is a whole hog that is slow-cooked to perfection over a massive pit for a period of many hours, infusing that great smoky taste into the meat itself. Where I’m from in Virginia, we would add a thick, ketchup-based sauce to the pork or chicken but that’s not how it’s done in Eastern North Carolina. In fact, that may indeed be a crime of some sort. No, instead there it’s all about preserving the taste of the meat itself, adding only vinegar, maybe some hot sauce, salt and pepper and that’s it. Served with some sides and eaten either as a dinner platter or on a sandwich, it may be simple but as I learned driving along the North Carolina BBQ Trail, that’s part of its beauty. 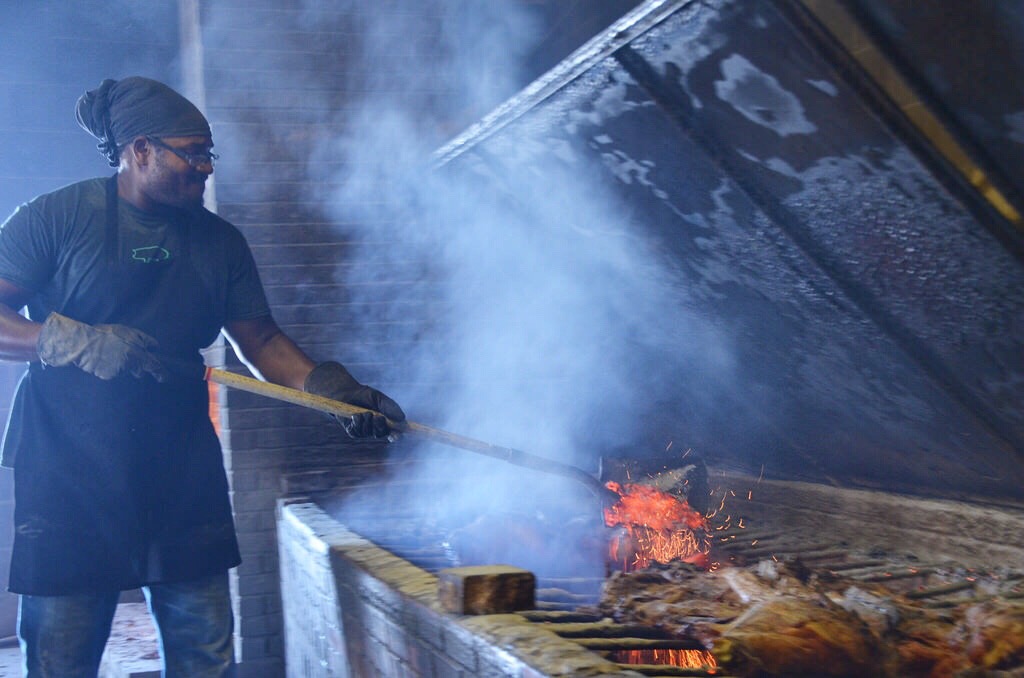 While I didn’t have the time to complete the entire trail that runs through the state, I was able to make a few key stops not only to taste some of the best in North Carolina, but also to learn about their brand of BBQ from the people making it. My first, and one of my favorite, stops was at the nationally famous BBQ restaurant the Skylight Inn, in Ayden, North Carolina.

In 1947, Pete Jones opened a small BBQ restaurant in rural North Carolina using a family recipe that was 100 years old. Cooking whole hogs over intense heat, the meat with its woody smoke flavor was soon a local hit. Staying true to their roots, that recipe hasn’t changed and since 1947 everyone from National Geographic to Southern Living and the Travel Channel has called Skylight one of the best in the country. They even won a James Beard award for being an American Classic. Knowing this, I was curious to see what the fuss was all about. 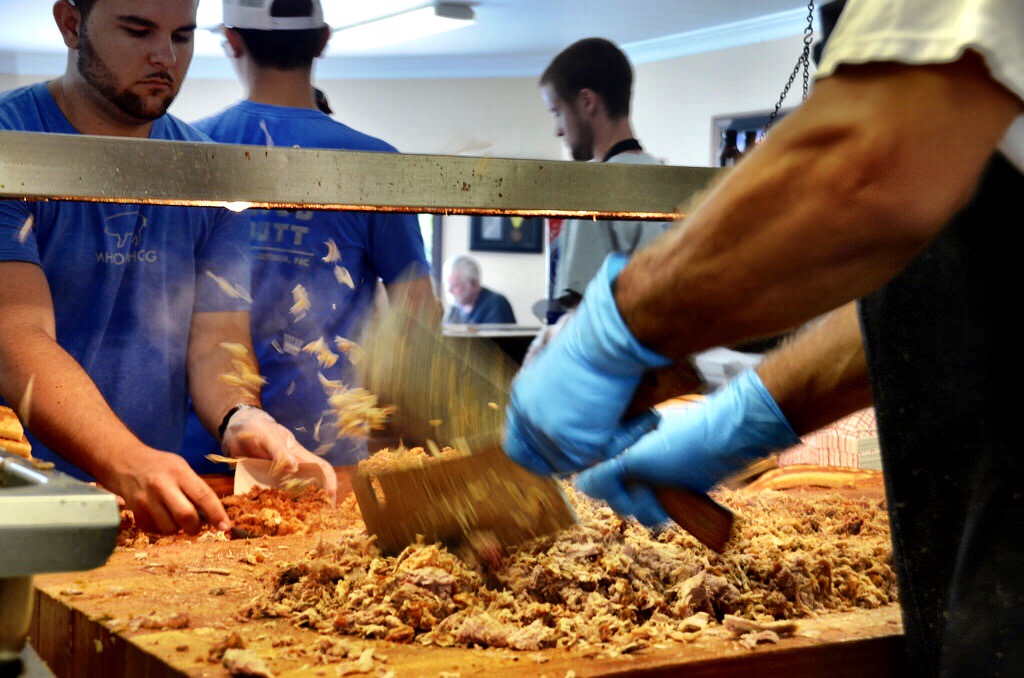 Walking in to see the pits themselves was something I’d never done before and I wasn’t prepared for the intense heat of the fires that filled the smoking room. The everyday life of a pitmaster is hard to conceive, but walking in I immediately smelled the smoky goodness of what the final product would taste like. Skylight has kept things the same since opening, which means a basic but delicious preparation of the BBQ. Once the meat has been smoked, it’s chopped and then vinegar, hot sauce and salt and pepper are added and mixed in with the meat. There is no secret sauce or ingredient, much to the chagrin of folks who have spent a lifetime trying to figure it out. Instead the unique taste comes from the cooking process itself; an alien concept to a guy like me who is used to thinking that the sauce is the most important part of the meal.

The meals are also served the same way as in 1947, with the choice of sandwich or full meat platter along with coleslaw and cornbread. But that’s it. No fries, beans, hushpuppies or anything else that I’m used to when eating a great BBQ dinner. But after my first taste I realized that nothing else was needed – the meat was that savory. Slightly charred bits of pork mixed in with the succulent and woody pork all combine to create what was honestly one of the best BBQ experiences of my life. I skipped the coleslaw, but the cornbread – which I normally don’t like – was unlike anything I’ve ever experienced. Flat and infused with bacon drippings, it’s as important a part of the dining experience at Skylight as is the meat itself. It was just my first introduction to Eastern North Carolina BBQ though; I still had miles to go and much more pork to consume. 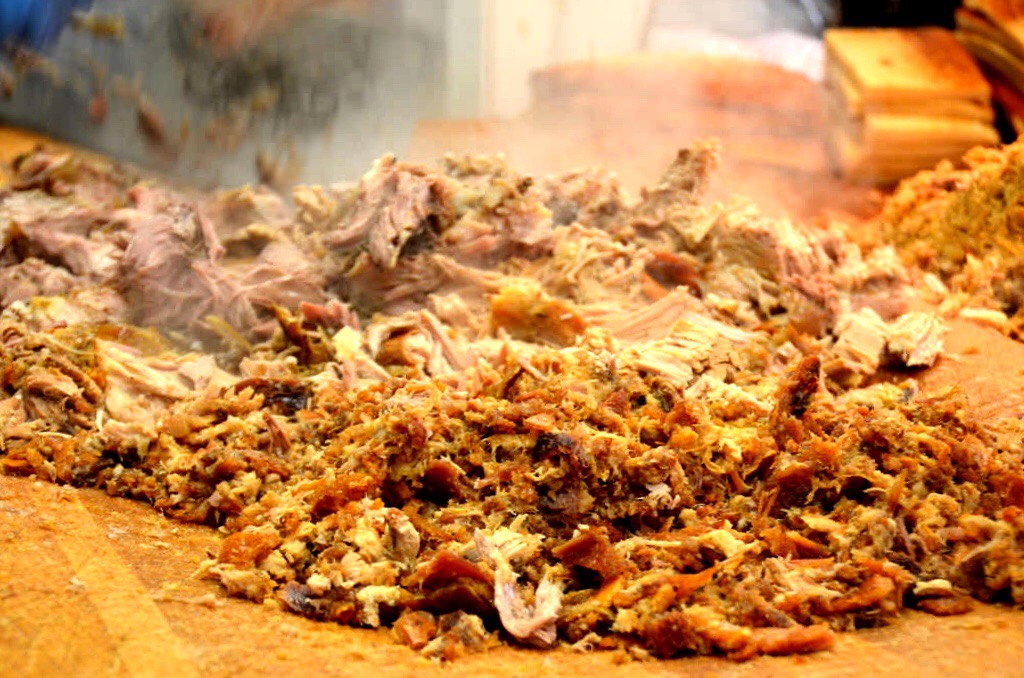 The more I sampled and learned though the more I thought about the cultural phenomenon that is great BBQ. Maybe it’s from having spent part of my life in the South, but BBQ is an incredibly important part of the cultural fabric of the country, well beyond the confines of the states below the Mason-Dixon line. In my opinion, BBQ is the quintessential American food and it was amongst the first that we developed independent of foreign influences. We actually have the American Indians to thank for the tradition teaching us the fine art and science of slow cooking meats over fires and pits. The Spanish noticed this style of cooking and the word barbeque in all likelihood comes from the Spanish word barbacoa that referred to the slow roasting of the meat. It was also the Spanish who first brought pigs to American shores, providing the most common form of BBQ still today. George Washington referred to BBQ and mentions of this regional delicacy are found throughout our history books. But more important than its age is its importance to our common culture. 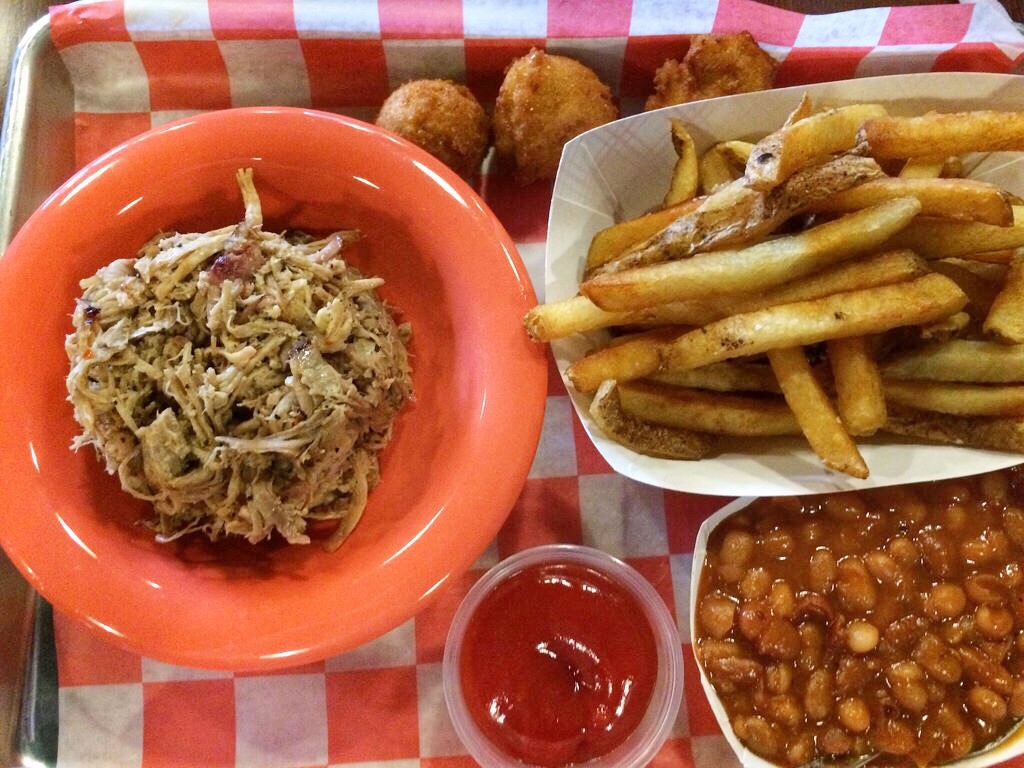 Pork and chicken have always been the meats for those of lesser means, including slaves and poor white people of the 19th and 20th centuries. Cooking what was available locally, built around this meat tradition are the sides that we now think of as classic BBQ accompaniments including: collard greens, cornbread and beans. These were not foods that the rich ate; this was the food of the poorer working class, of farmers and people who could barely keep their families alive. Originally, BBQs were special, festive occasions when communities gathered and families spent time together. The importance of community in the act of eating BBQ cannot be overstated – it persists still today when we can essentially enjoy BBQ whenever we want. Pull up to any great, hole-in-the-wall or inconveniently located BBQ restaurant on a Sunday afternoon and expect a long wait. After church for many people is still the favorite time to have a hearty BBQ lunch or dinner, hearkening back to those early roots in bringing small communities closer together.

There is also a good chance that I’ve spent far too much time thinking about BBQ while on my road trip through North Carolina, but I don’t think so. BBQ is vitally important in the culinary history of the country, but even more so in the cultural fabric of North Carolina. From humble roots to the star of food awards, BBQ now is trendy, popular and anything but a meal made from scraps no one else wants. But that same foundation is alive and well in North Carolina and just like the folks at Skylight Inn, the best BBQ masters in the state are keeping true to tradition and producing amazing food just as they always have.

Where is your favorite BBQ?

6 thoughts on “What Exactly Is North Carolina BBQ & Why Should You Care?”