I stepped off the Machu Picchu train after an hour and a half scenic ride through the Andes leading from the small town of Ollantaytambo arriving at an even smaller town along with hundreds of other travelers. The train was packed and everyone crowded the platforms not sure where to go, little did they know there really wasn’t much of a choice. There was only one way out into the town of Aguas Calientes itself, and once I erupted from the station I couldn’t help but gawk at the strange little town perched high in the mountains of Peru. I didn’t realize it at the time, but that began my visit to Aguas Calientes or Machu Picchu Town – one of the strangest little towns in the world.

Aguas Calientes, which means Hot Waters in Spanish, is nowadays most often referred to as Machu Picchu Pueblo or Machu Picchu Town. It began life early in the 20th century when the railroad was constructed through the mountains. Just 68 miles from Cuzco, it still seems like a world away from anything and that certainly must have been the case in 1901 when it was little more than a tented railroad camp for workers. It wasn’t until the 1970s though when things really took off in town as tourists started arriving, all wanting to visit one place – Machu Picchu, located just a few miles away. It was the ideal point from which to visit this now UNESCO World Heritage listed site and almost overnight the scores of tourists led to the development of hotels, restaurants, bars, shops and everything else that a good tourist needs. Domestic terrorism in the 1980s, which was rampant throughout Peru, retarded growth but once Shining Path was dealt with, tourism once again began in earnest in the 1990s and onward. Today more than 1,500 tourists arrive by train every day and the village exists solely for tourism; quiet streams turned into plazas and seemingly every square inch of hillside transformed into a shop or restaurant. It’s because of these odd growth spurts I think that I found it so very strange, but intriguing at the same time. 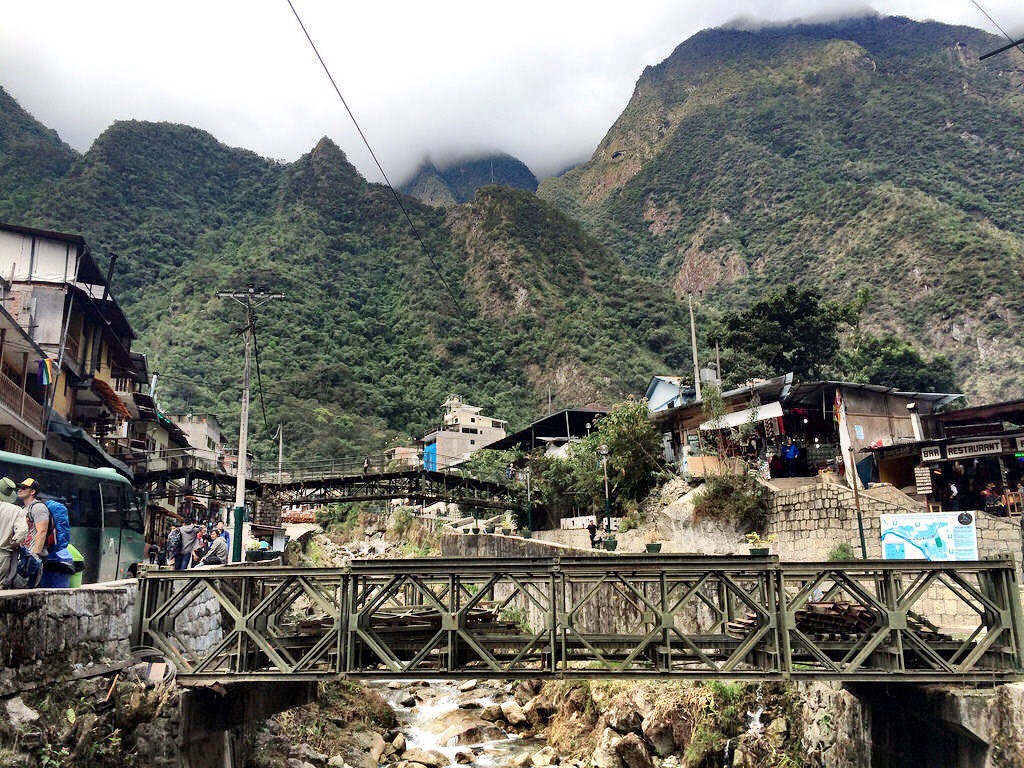 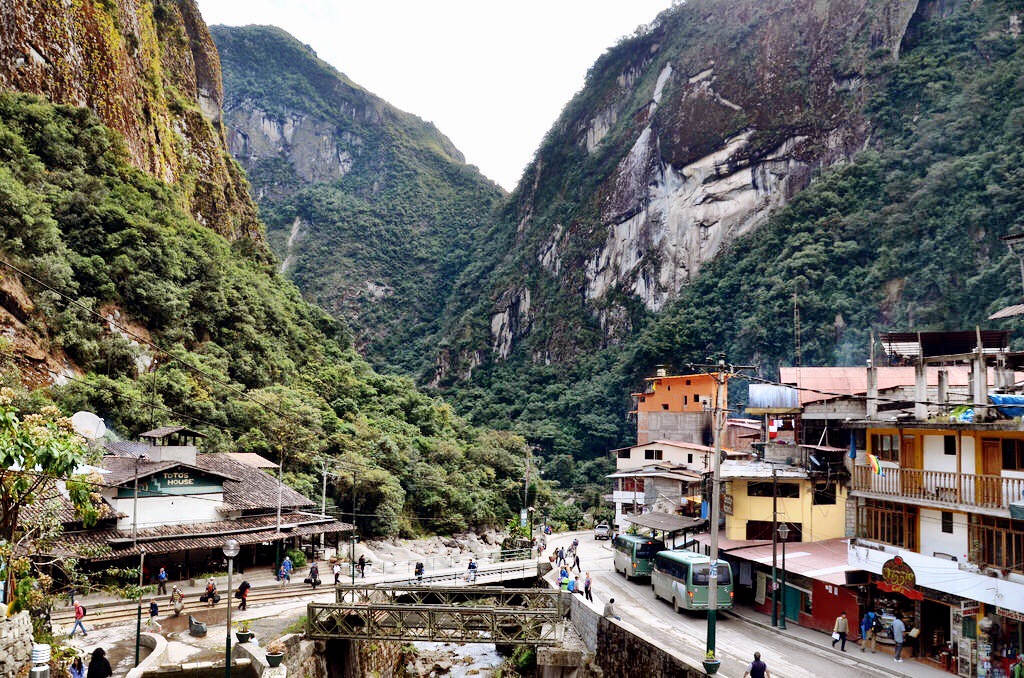 The town isn’t a big one and is built into the surrounding hillside. Running through the middle of Aguas Calientes are train tracks, a perfect metaphor since the train really is the lifeblood of this community. The town produces nothing, so everything is shipped in via train and every visitor, whether it’s someone just there for the day or hikers finishing up the 4-day experience known as the Inca Trail, everyone will spend at least a little time in town. So what is there to do exactly? Not a lot to be honest, but then again there really doesn’t have to be. This isn’t a place where many people spend more than 1-2 days. There’s nothing to do around the town and Machu Picchu really only takes one day to explore. People arrive by train, spend the night, tour Machu Picchu and then leave again by the same train. That means Aguas Calientes has a limited time frame during which the residents have to grab the attention of the tourists and make their sales before the tourists once again leave for the safe and warm embrace of civilization. And based on my own exploration of the town, this has been turned into an art form. 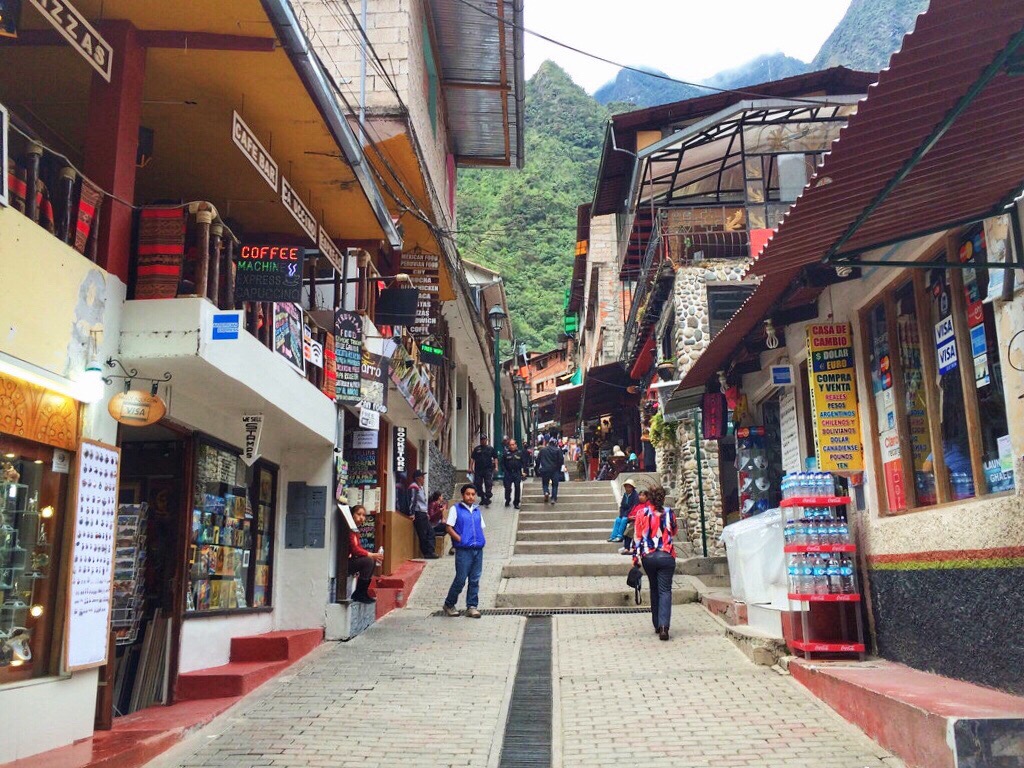 Aguas Calientes may not be big, but it’s confusing as hell. Probably not by design but rather a function of the town’s growth spurts, for the first time visitor (which is everyone) trying to apply order and reason to the streets and alleys is at first a challenge. A series of bridges connect both sides of the town, each of which features scores of shops and restaurants in nearly every size and style. Small side streets suddenly lead into local markets, which somehow morph into promenades with yet even more stores and places to eat. It’s just an endless array truly of restaurants, convenience stores and massage parlors. Taking advantage of the fact that hikers will be sore and tired, the parlors offer much-needed rubdowns at reasonable rates. But if you’re not in the mood for a massage, then there really aren’t a lot of other options for entertainment. 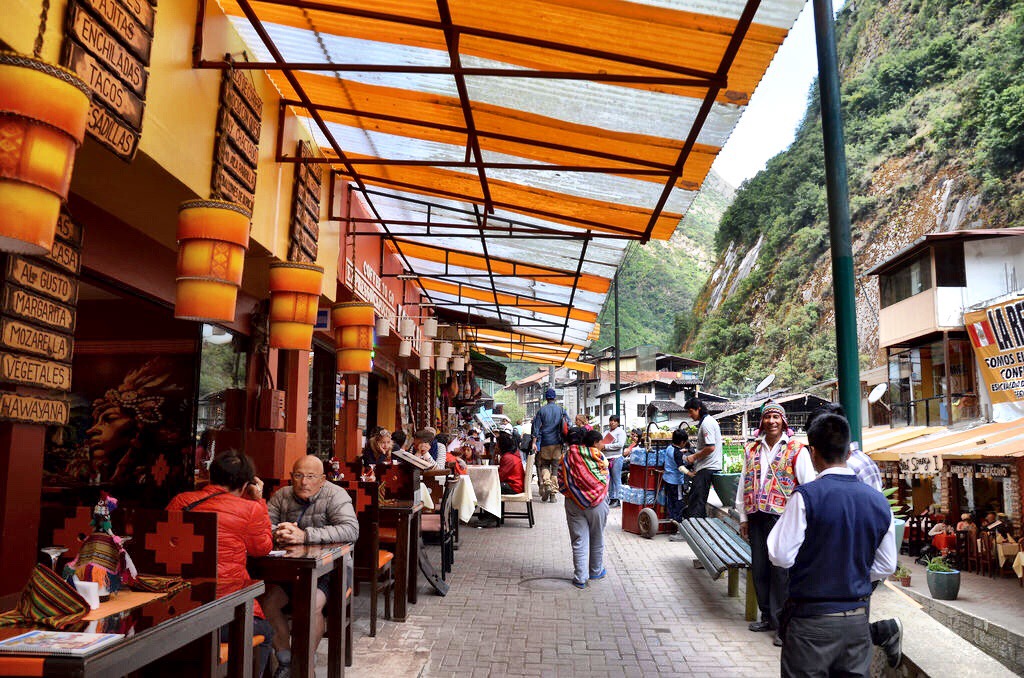 Not unlike the main tourist areas in Cuzco, most of the restaurants in Aguas Calientes are carbon copies of each other; each offering the same generic tourist menu. The major difference between Aguas Calientes and Cuzco though are the prices. Because everything has to be shipped in and because they have a very captive audience, prices for everything in Aguas Calientes will be the highest you’ll find anywhere during your trip around Peru – in some cases double. The same goes for items in shops and conveniences stores, from bottles of water to snacks. There are a few exceptions to the generic restaurants and cafes though, including a French bakery I found while trying to get unlost one afternoon. La Boulangerie de Paris is a welcome deviation from the norm in Aguas Calientes and while the prices for their coffees and desserts are absurdly high, they are well worth it. After suffering through horrible hotel coffee, it was nice to spend some time enjoying a hot beverage along with a surprisingly well done chocolate croissant, all the while roaming the internet on the café’s free WiFi. It was a calm moment in an otherwise confusing town. 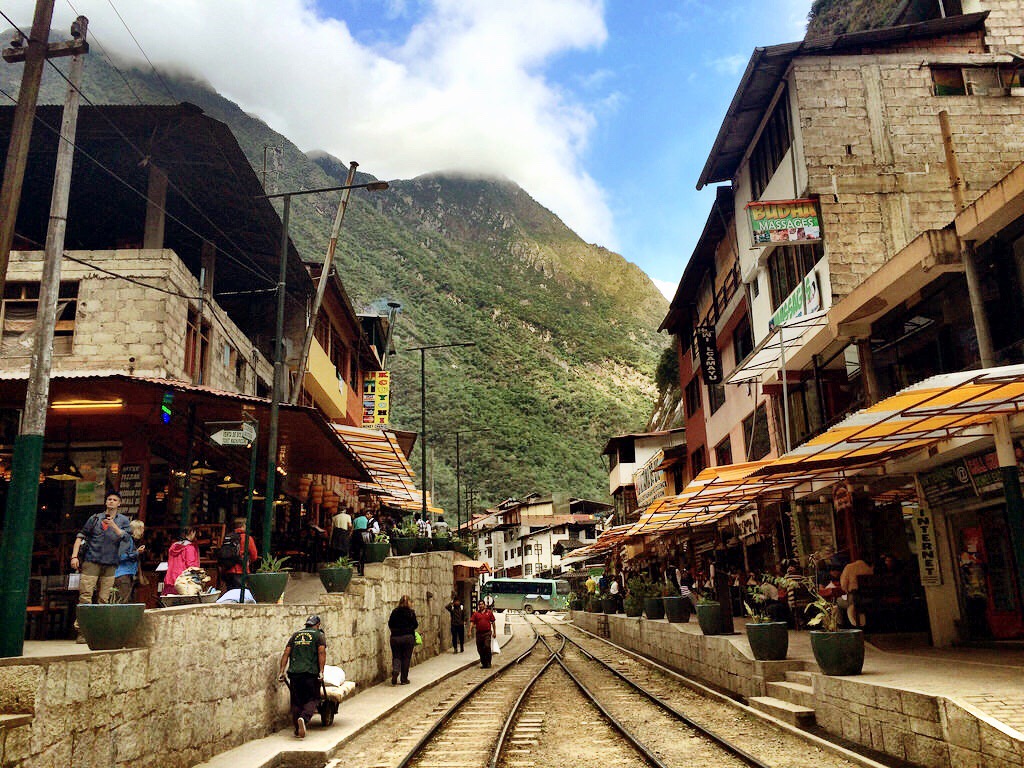 What to do that’s not Machu Picchu

Aguas Calientes exists for one reason and one reason only, to cater to those tourists visiting the legendary site of Machu Picchu. But there is (a little) more to the town than catching those shuttle buses up to the Inca site. It’s called Hot Waters for a reason, and most visitors to the town will spend some time soaking in the warm natural waters for which it is named. About a ten-minute walk up the mountain from the center of town, the hot springs facility isn’t fancy, but it doesn’t have to be in order to soothe the aching muscles of hikers who completed the Inca Trail. For just a couple of bucks you can soak in the curative waters of the springs in an open-air facility with the amazing Andes as backdrop. By far the most popular in-town activity, that’s probably because it’s also the only in-town activity, but a nice rite of passage for those who visit.

More interesting, to me at least, was touring the Machu Picchu Museum that no one visits. What visitors to the actual site of Machu Picchu itself may notice is that there’s no interpretation of the site. At many world famous destinations, there’s something explaining to people what it is exactly they’re seeing and visiting. Not so at Machu Picchu, but there is a small museum that details the use and function of Machu Picchu, how it was re-discovered and how it is preserved today. It’s the museum that every visitor should spend some time in, but the problem is that almost no one knows about it. That’s because the Museo de Sitio Manuel Chavez Ballon or Machu Picchu Site Museum, isn’t actually at Machu Picchu itself. It’s not in the town of Aguas Calientes either. It’s in a hard to reach no man’s land ensuring that only a few intrepid travelers like myself will ever visit.

The museum’s location a mile away from the city center doesn’t sound inconvenient at first, but you need to also understand how people get around in this weird place. Everyone is there to see Machu Picchu and if they aren’t hiking, then they take the buses up the mountain to the main site. The buses don’t stop anywhere; they merely convey people from the town to the UNESCO site and back. In town there aren’t cabs (no need really since it’s all a pedestrian zone) and really the only way to explore Aguas Calientes is by foot. So, on the off chance you ever do want to leave then your two feet are the only option. Knowing all this, I decided to visit the museum before leaving town, curious more than anything else. The walk along the main road took about 25 minutes or so, past hotels, campgrounds, a butterfly sanctuary and even botanical gardens, all perched along the beautiful river that flows through the mountains. A nice walk, it was interesting to see things from a different point of view and it made finally arriving at the museum in the jungle seem like a well-earned prize. And you know what? It was the best-run museum I visited in Peru. Modern, well curated and interesting – it may be a little small, but it shares information about Machu Picchu that is oddly enough lacking at Machu Picchu itself. I personally think every visitor to the site should incorporate a museum visit, but its odd location means that only a few visit every day. 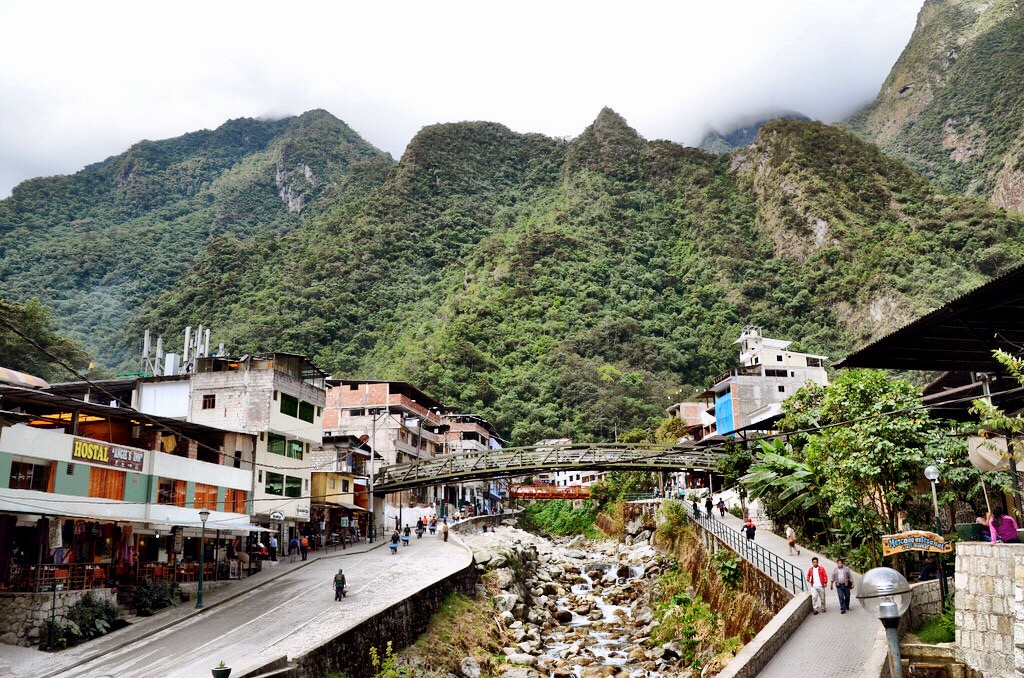 No one really wants to go to Aguas Calientes, not really. It’s not a destination in its own right, it doesn’t have postcards and few reflect fondly on their time spent there. But that’s not to say it’s not a special place, I think it is. There are few places in the world teeming with as much excitement and anticipation as does Aguas Calientes. Everyone is there for one reason and one reason only – to finally tick an item off of their bucket list and visit the legendary site of Machu Picchu. For many, myself included, it’s a special moment and one that all who visit will remember until the end of their days. So while few may want to spend time in Machu Picchu Town, what little time they do spend there is special and will hopefully be recollected with as much fondness, if not some smirks and laughs, as their adventures in and around Machu Picchu itself.