There are just some places around the world so iconic, so recognizable that they don’t need an introduction, and certainly Machu Picchu in Peru falls into that category. This Inca city high in the mountains is a place of wanderlust for most of us. Those fog-covered mountains and the promise of exploration, real exploration, and discovery – the likes of which most of us thought had long since vanished from the world. At least that’s the promise, one that drives millions to visit. I know that’s why I was there, not only to tick off an item on my 40 Before 40 List, but to also fulfill a long held dream. To ascend to the top of the Andes and to explore the once forgotten town of Machu Picchu for myself. But does all that anticipation actually live up to the hype? Here’s my answer to that important question. 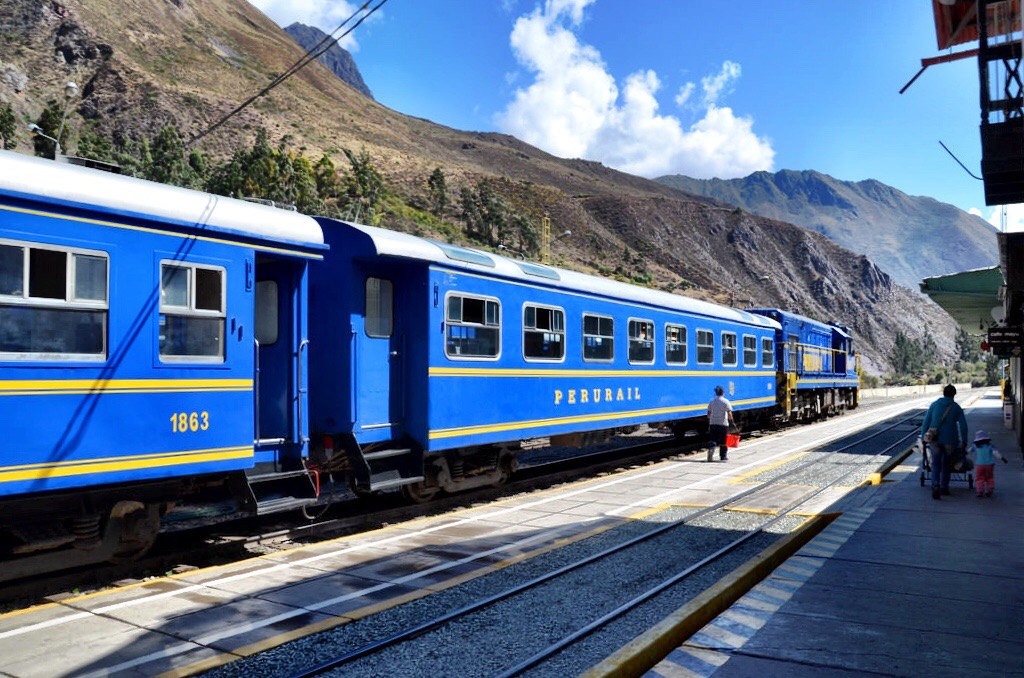 I traveled to Peru, and ultimately Machu Picchu with Intrepid Travel – the adventure tour company who generously sponsored the trip. The tour was a short one, just 7-days, and the main focus was Machu Picchu and the surrounding Incan sites. Like a good novel, the tour slowly built anticipation every day, teasing guests until the last full day of the tour, the Machu Picchu day. At least that was my experience, but then again I didn’t hike the famous Inca Trail. This 4-day trek through the mountains of Peru is strenuous, but apparently rewarding from everyone I’ve talked to. Starting just outside the mountain town of Ollantaytambo, it meanders through the Andes until that final moment when trekkers arrive to Machu Picchu itself. I, and thousands like me, opted not to hike and to instead visited in a much more low-impact way.

There aren’t many ways to actually reach Machu Picchu, and it is a process. If you don’t don a backpack and take to the 4-day hike, then your other option is the surprisingly well-managed Inca Rail Machu Picchu Train. This scenic rail leaves from the small town of Ollantaytambo, the launching pad for all explorations of the ancient Incan monuments. I wasn’t expecting a lot honestly, but whatever it was I expected was quickly surpassed once I got on board. Large windows, comfortable seating and even a snack service were all features of the easy 90-minute train ride to Machu Picchu Pueblo. As I said, I was traveling with Intrepid Travel, so all of the tickets for the trains and logistics were thankfully handled by them and expertly executed by our tour leader. I’m prone to stressing over and eventually losing tickets, so having the tour leader manage that for me was actually a welcome relief. Along the way massive mountain peaks, quiet farms and even a waterfall or two came into sight. Those stunning views, as I would later realize, were the perfect first introduction to the even more dramatic terrain that lay before us. 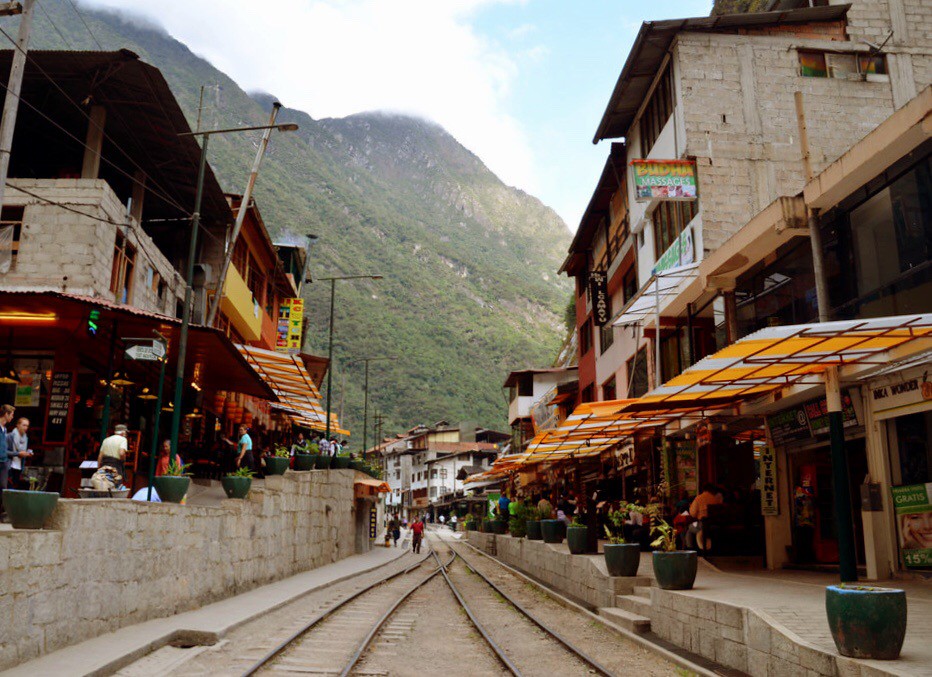 The Machu Picchu train doesn’t actually go to Machu Picchu, well not really. It goes to what may be one of the strangest villages in the world – Aguas Calientes or Machu Picchu Town. The town exists, and has always existed for one reason – to service the visitors to the remote area of the Andes home to Machu Picchu. Named after the local hot springs, the town is home to a seemingly endless array of restaurants, cafes, massage parlors, shops and a number of other ways for tourists to spend their money. Small hotels cater to the travelers and the train runs through the middle of town. It’s a strange place, one that I’ll eventually devote an entire post to, but if you’re visiting Machu Picchu then you too will get to experience this quirky little place.

If you’re not on the trek, then the next step in the process of visiting the UNESCO World Heritage Site is by bus. Technically you could walk, but it would take forever and I don’t see the point. Every morning hundreds, if not thousands, line up starting at around 4:30AM to be the first in line for when the busses leave Aguas Calientes at 6am in order to reach Machu Picchu by dawn. The trip is a short one, just about 25 minutes, up the switchback mountain road that eventually leads to Machu Picchu. If it seems like there are a lot of steps involved with visiting the site, there are. But it’s part of the experience and ultimately part of the fun. We want to believe that Machu Picchu isn’t like other places around the world, and it isn’t. It takes real effort to visit but, as I learned, that effort is well rewarded.

Once again thanking my stars for having a good tour leader, she gave us all detailed instructions on entering the site, where to go and so on. We had a scheduled organized tour later in the morning, but the first moments of discovery would be solitary ones. So with passport in hand, you need one in order to enter the site, I was ready to finally see the peaks and ancient structures of this city in the clouds for myself. Of course, so were several hundred of my closest friends. It was a bit of a scramble at first, no one really understood which way to go, but we all eventually figured it out, walking up the steep paths and rocky promontories until reaching the zenith and those postcard picture views we’d all been promised.

Many times guide books and travel magazines present famous sites in ways that aren’t realistic. Camera angles or conditions that are rare, leading to a certain level of disappointment amongst visitors. That’s not the case at Machu Picchu. Every postcard you’ve ever seen is accurate, it really is that beautiful and anyone can capture that famous photo. I was lucky that morning, there was no morning fog and the conditions were just about perfect. With a slight nip in the air, the sun shone down brilliantly on Machu Picchu itself, drawing out the fine lines and features I’d never before noticed when I gazed at the images in print. 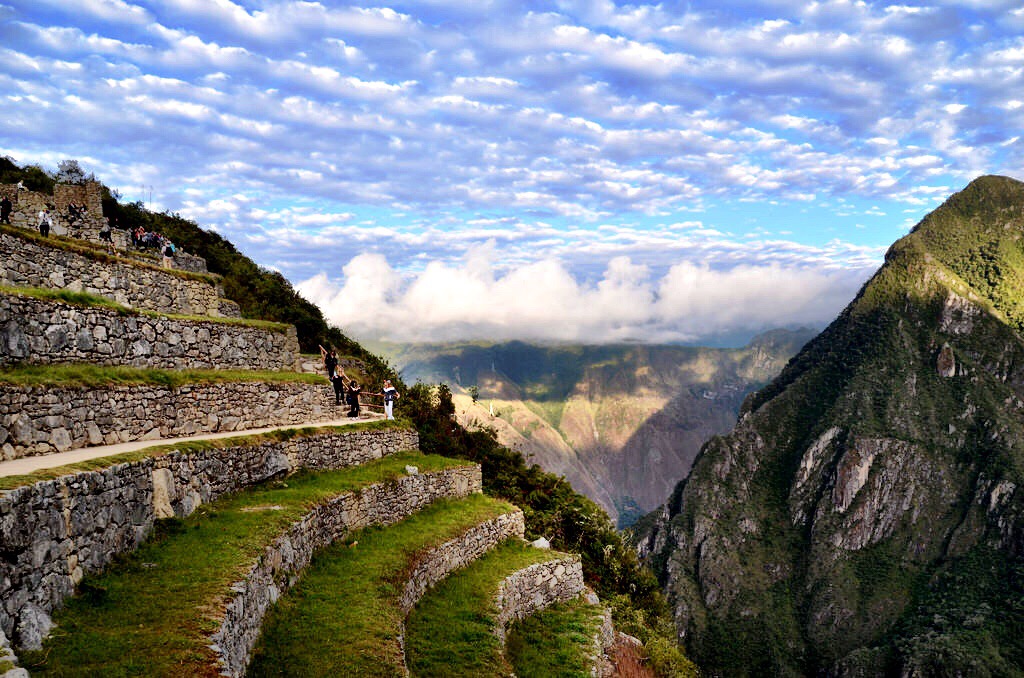 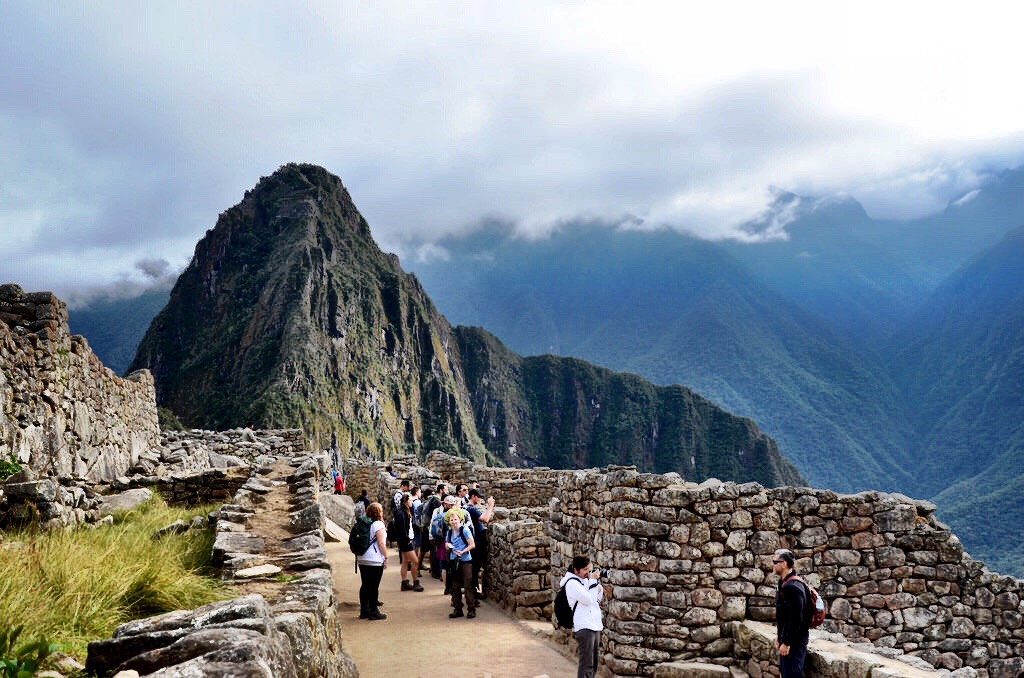 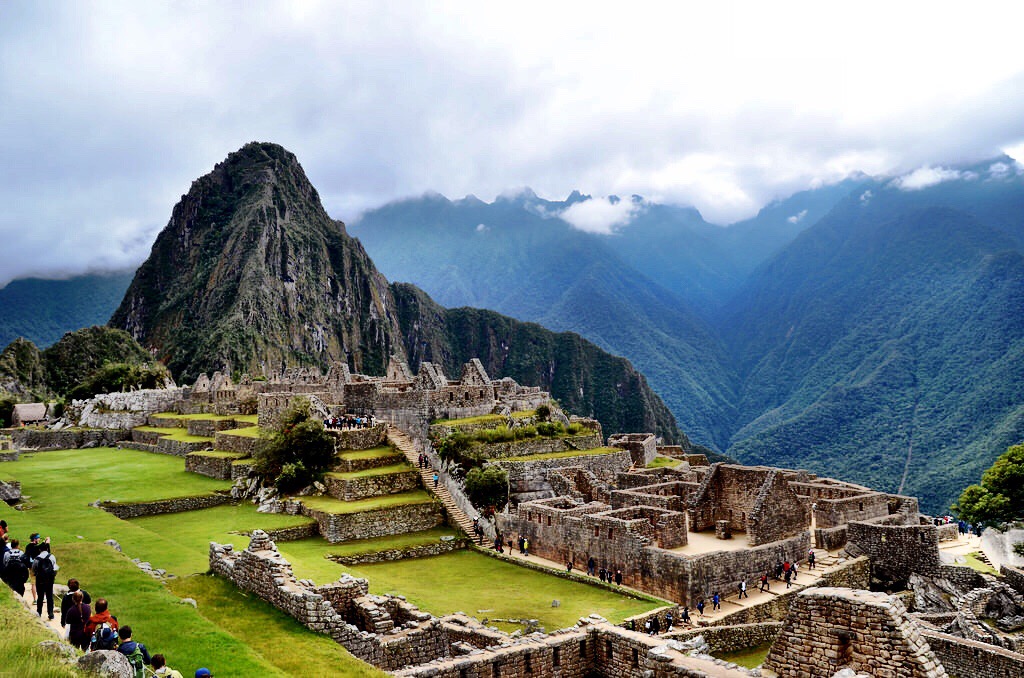 So then what? After taking a few photos from the top overlooking the ancient town, everyone seemed a bit lost, wondering what to do next. Most hire a guide, one was already arranged for our Intrepid group, to lead them around the site itself, sharing the history and customs of the Incas. The tour lasts two-hours and follows a set path down and into the city itself, a treat that I didn’t know was even possible until that morning. It was a great way to learn about the real foundations of Machu Picchu, what it was really there for and to also learn about those oh-so-mysterious Incas, whose technological prowess seemed to know no bounds. The tour finished, I looked at my watch that read 10am and wondered what to do next. 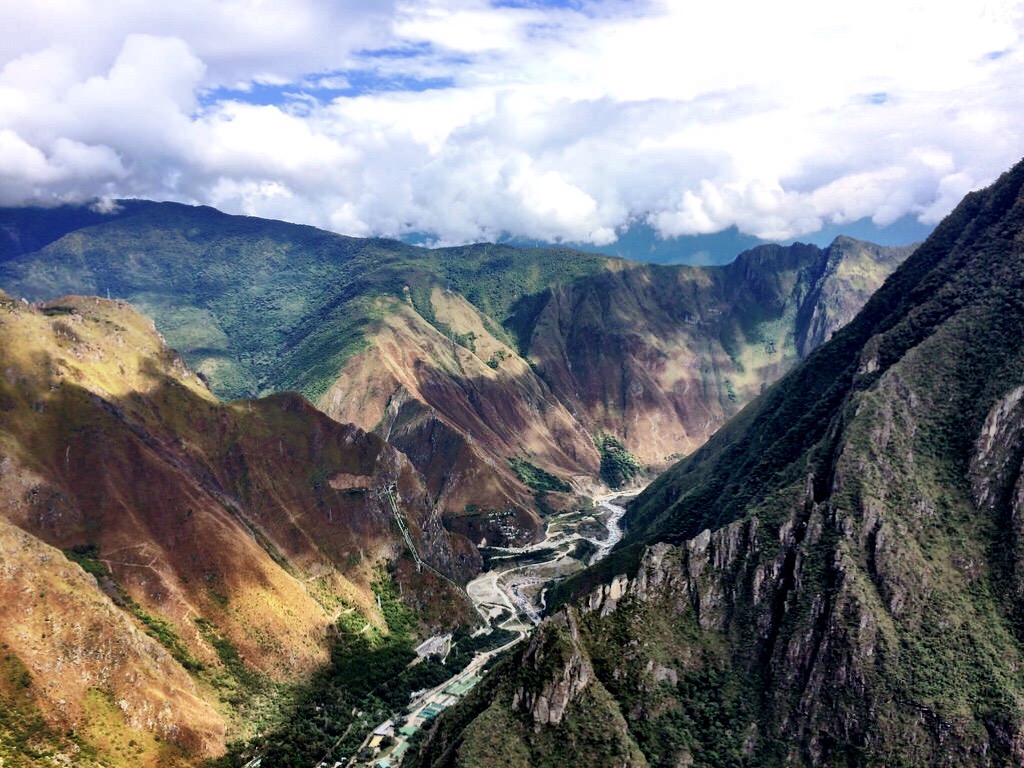 The tour ends along the path that leads back out of Machu Picchu, but I didn’t want to leave, not yet at least. My ticket was good for all day and my train back to Ollantaytambo didn’t leave until 4pm, so I could have spent as much time at Machu Picchu as I wanted to. I didn’t feel like I could leave just yet, it was far too early, but I also didn’t know what else to do. I walked back up to the overlook, guided newcomers to the site on the best places to capture a llama photo and once again stared unto the architectural emblem of the Incas. Being there was a special moment, a culmination of decades of travel lust and yearning, but it all seemed to happen so fast. Mid-morning and I’d seen all the site had to offer, taken all the photos I wanted to shoot and was left feeling lost. It was a slightly sinking feeling, as if I was doing something wrong or wasting my time. Never one to be lazy, I tackled one of the short hikes found around Machu Picchu, which was nice, but even after having completed that I had only killed an hour. So I did the only thing that made sense – I left.

Maybe it’s the process of getting to Machu Picchu, but I felt as if a few hours wasn’t enough to see it all, except that of course it was. Most sites around the world as famous as this one don’t require a day’s worth of exploration, but I think maybe I wanted too much to believe myself an intrepid explorer of days gone by and that 3 hours surely wasn’t enough to witness all the marvels that this ancient site had to share. I was wrong, it was more than enough and with that in mind I boarded the bus back to Aguas Calientes, leaving Machu Picchu in the dust behind me.

Visiting Machu Picchu was a moment in time I’d dreamt of since I was a little kid; as I’m sure it is for millions of people around the world. For the most part, the experience lived up to the hype, from the look and feel of it to the process of visiting. It is one of those remarkable moments in our lives when everything seems to click, and that moment we worked so hard to attain comes to fruition. That’s actually fairly rare when we travel, so many times we over-hype important destinations and distort the experience. Not so at Machu Picchu, at least not for me. No, visiting this remarkable place high up in the mountains of Peru was just as special as that 10-year boy reading about it in the encyclopedia thought it would be and more.

Have you been to Machu Picchu or, if not, is it on your bucket list?

17 thoughts on “What Visiting Machu Picchu Is Really Like”