Monday May 21st, 2012 was an unexpectedly momentous day for me. I was visiting France on a press trip and that morning found myself in the small town of Rochefort. Later that afternoon I had a conversation with my boss at the time and by the end of the call it was agreed by everyone involved that my true passions in life rested not in an office, but in travel. I was officially without a job. I sat in my car and cried a little, terrified of the future and not sure what to do next. Those events could easily have overshadowed the other event of the day, but they didn’t. In a testimony to just how amazing and impressive the frigate ship Hermione is, three years later I think more about her than I do losing my job. Maybe that’s why seeing her again, finished and this time in the U.S., was so important to me. It was a cathartic experience, one that finally closed a chapter not only in my life, but for everyone involved with the incredible undertaking of reconstructing the Marquis de Lafayette’s frigate ship that brought him to America, the Hermione.

That voyage wasn’t just an ordinary trip; it was one that ultimately decided the fate of the United States. Lafayette sailed to share the good news with George Washington and the rebel colonists that France was prepared to enter the war on their side, to supply troops and arms to fight the British. It was a decisive moment in the war and one that in all likelihood guaranteed our eventual victory. If you look around the country both France and Lafayette are still honored through place names and the odd French word that turns up. From Fayette County in Kentucky, to parks and streets nearly everywhere, we do still remember the importance of the French commitment and the ongoing friendship between our two countries. And that’s what the creators of this project wanted to do, reaffirm a friendship that while rocky at times, is the longest this country has enjoyed.

It all started in 1997, when a small group of slightly crazy but committed folks decided to rebuild the Hermione, the frigate ship that transported Lafayette, but using only the tools and techniques that were used in the 18th century. At the time the small town of Rochefort, where the original ship was built, was in a dark place. Once one of the great shipbuilding capitals of the world, modernity had left it in its wake, so to speak, and the community was struggling to redefine itself in a new century. Oddly enough it was going back in time a couple of hundred years that resurrected Rochefort. The project itself demanded that old buildings and practices be reintroduced and relearned. Experts were brought in and even the old rope making building, the massive Corderie, had life breathed back into it. The Hermione, a two hundred year old ghost, gave this otherwise beautiful French town a second chance.

But this isn’t a story about Rochefort, it’s about the Hermione and the opportunity for me to finish the story I started three years ago. In 2012, I wrote about visiting the half-finished ship, which admittedly looked small sitting in its dry dock. Over the course of nearly 20 years, more than 20 million dollars was raised, all from donations, to fuel this project and given the state of affairs in 2012, I was dubious the project would ever be finished. But I followed her progress through the months that morphed into years, saw photos of her as she was first floated out to sea and that unique and scary moment when her sails were first unfurled. I was excited, it was like seeing an old friend prosper and succeed and I was proud for the people of Rochefort. But its hardest test, the trip to America, was an entirely different matter.

The Hermione was actually built for several reasons, but a big one was to serve as a symbol of the friendship between the U.S. and France. More than a quarter of a million people visited the Hermione during her development in France every year – a huge number if you think about it. I was worried though that here in the U.S. the interest just wouldn’t be there, that the memories of the Hermione were too far gone and that modern day interests no longer had room for a mighty tall ship. And I was naturally wrong. 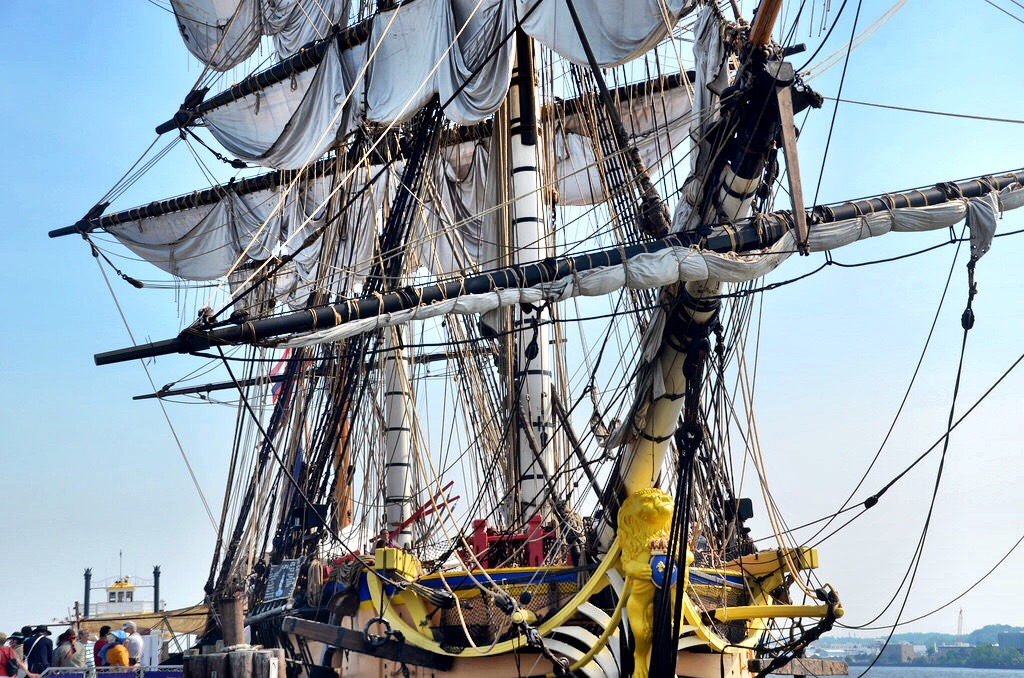 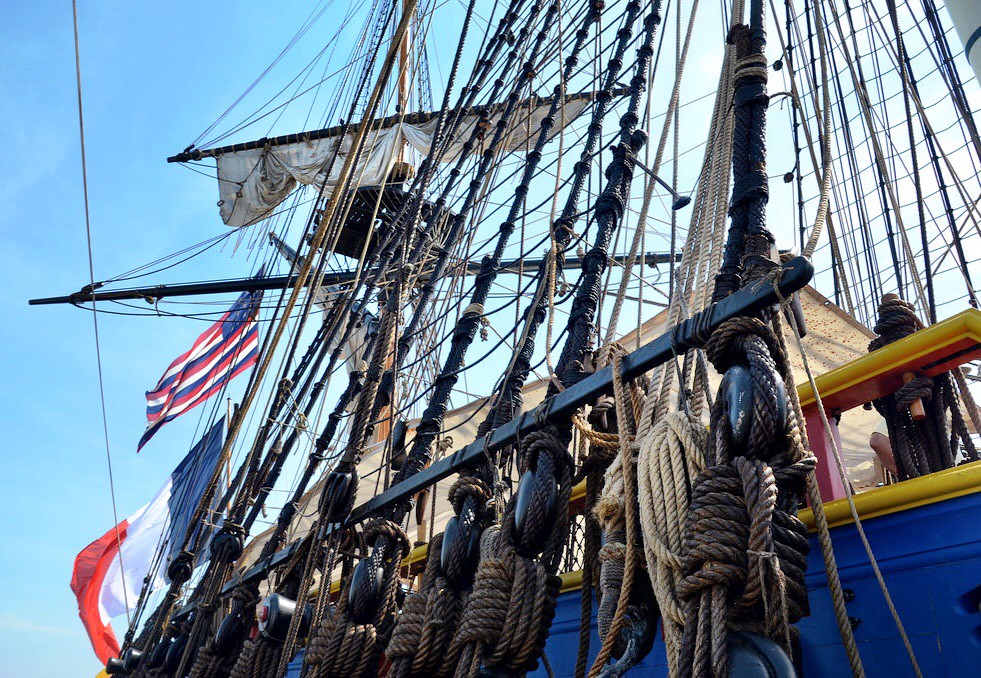 The Hermione is making several stops here in the United States, starting in the Tidewater area of Virginia, then DC, Maryland and eventually New York and Boston. I was fortunate enough to see her just the other day as she made a stop in Washington, DC, in Alexandria to be exact – just across the Potomac River in Virginia. It was a fitting stop, just down the river from Washington’s home of Mount Vernon in an area of town that is older than the country it calls home. It was at a nearby church where many of our Founding Fathers, including Washington, attended services and nearly all of those famous Americans lived nearby. So it was perfect that the Hermione was reunited with this ancient past, and the people responded in kind.

Summer in the DC area is not a kind time of year, and the temperatures on the morning I visited the Hermione soared particularly high. And yet I was joined by hundreds of other people, literally all ages, every one of them standing in line for a chance to go onboard the beautiful Hermione. Many more lined the docks and walkways of the marina, gazing up at the ship in her full glory. I was immediately thunderstruck by the experience. When I last saw her she was nothing more than a brightly painted hull. I would never have believed three years ago that this once modest boat would develop and transform into a beautiful frigate ship in her full glory. The French and American colonial flags waved in the breeze, and the complex rigging and sails danced alongside them. It was a beautiful sight and affected me emotionally much more than I ever would have imagined. 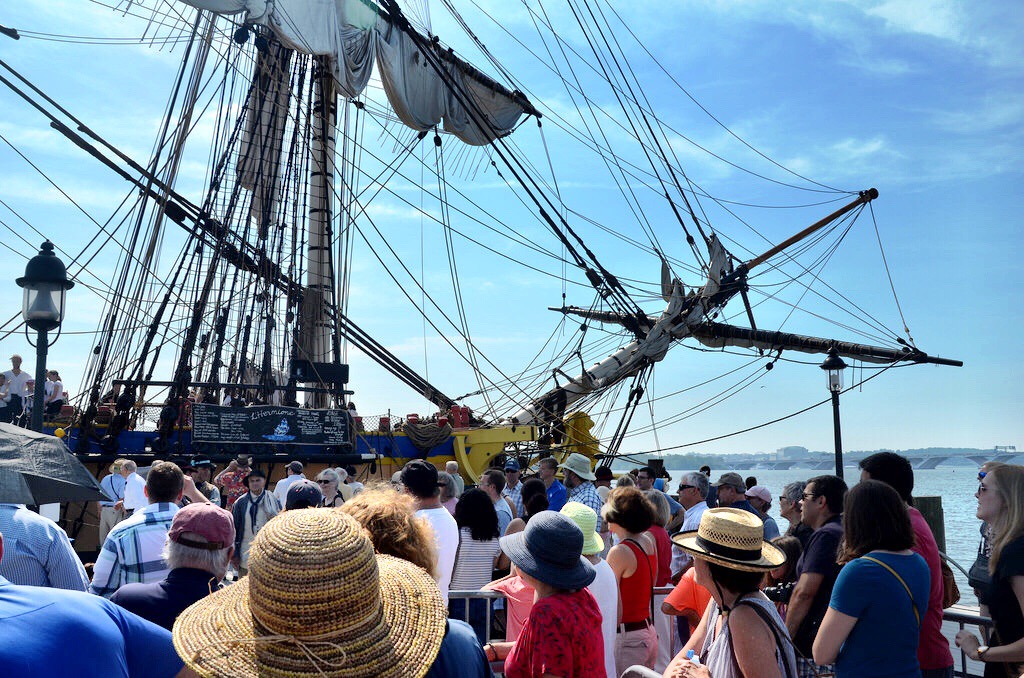 Without my knowing it, Hermione’s story had become my own. We’ve both been through a lot and have both come out the other side, better and stronger than ever before. Sure, I loved walking across the deck of the ship, marveling at the expert woodwork and pure talent that it took to complete this mighty vessel. But I also looked at the faces of the kids and adults alike all around me, everyone beaming in a state of awe as they explored this modern-day relic. I was proud of the Hermione, proud that she had indeed fulfilled an old promise and once again traveled to the U.S. to offer her aid. This time that aid came in the form of friendship and to remind us of our own history; something we tend to forget far too easily.

After the Hermione completes her American sailing trip, she’ll return to France and serve as a living museum for what I’m sure will be millions of people over the years. Whether it’s here in the U.S., or in France, just make sure you get a chance to go see her, walk her decks and be just as amazed as I was. This isn’t just another nice tourist site, it’s our collective history, the story of us, and it’s vital we all remember that.