Egypt is a country of myth and legend; of places that exist in the collective imaginations of the world and that seem impossible to occupy space in the real world. Yet they do, and perhaps the most impressive of Egypt’s ancient monuments is the Valley of the Kings. No, you won’t find pyramids here or lavish temples or anything above the ground, except for mounds of sand. That was the point though, to conceal and preserve and while that didn’t really work, the ancient tombs of the Pharaohs still remain, waiting for us to explore them.

I started my own exploration of the tombs with Insight Vacations a little frustrated though. Photos aren’t allowed anywhere in the valley, in order to stop people from taking cameras down into the tombs themselves. It’s a smart policy, and while I was at first a little peeved I quickly let go of it and enjoyed the ability to throw myself into the experience. It’s nice to put down the camera sometimes and to enjoy the moment for what it is, and the Valley of the Kings is the ideal place to do just that.

The Valley stands on the west bank of the Nile, opposite modern day Luxor and for more than 500 years between the 16th to 11th centuries BC served as the final resting place for the rulers of ancient Egypt. Purposefully built in the middle of the desert to deter thieves, most of the graves were robbed in ancient times, but the tombs that remain still offer important clues to the past. Not all the tombs were robbed though; this is where Howard Carter discovered the tomb of Tutankhamun in 1922, complete with its riches and new tombs are still being located today. It’s a place of power where the imagination takes over full control and I couldn’t wait to see it all with my own eyes.

Walkways connect the various mounds to each other, their riches of information just beneath the surface. Every day a few of the tombs are open to visitors and everyone follows a similar trail around the accessible parts of the valley. Next to each mound, open or not, is a sign with the name of the ruler who once rested below. It’s a collection of some of the most famous names in Egyptian history and it’s amazing to think of the centuries of history all found in this one place. The real treat though was descending into the tombs themselves.

As I started to walk down the pathway that took me into the bowels of the earth, I couldn’t help but think of the original archeologists who re-discovered the Valley. The tombs are dark, today lit of course, but back then must have been intimidating and more than a little scary to explore for the first time. But immediately I saw what kept them going, colorful murals appeared on either side, leading me deeper into the tombs – the colors still amazingly brilliant and as impressive as when they were first painted.

The tombs are impressive, no doubt there, they descend deep into the earth and the chambers can extend in multiple directions throughout the underground space. Think of the work required to build these final resting places, all in the dark and with more than a little bit of danger involved. Although the riches and treasures have long since disappeared, the hieroglyphics and images are still there, all demonstrating the incredible power once enjoyed by the mighty Pharaohs. Believe it or not, but the tombs have been tourist sites for millennia. Before we rediscovered them, the ancient Romans and Greeks visited just as we do today, even inscribing their names on the walls. Some things never change I guess.

To walk through the tombs really is to be in another time, another place. I could imagine the priests assembling deep below the earth, the golden treasure glittering in the torchlight and the smell of incense filling the air, creating a smoky yet somber atmosphere. It’s one of the few times anywhere in the world when I was able to see past the ruins and to imagine the real people who once occupied that same space. It’s a remarkable experience, and one that only the Valley of the Kings can provide. 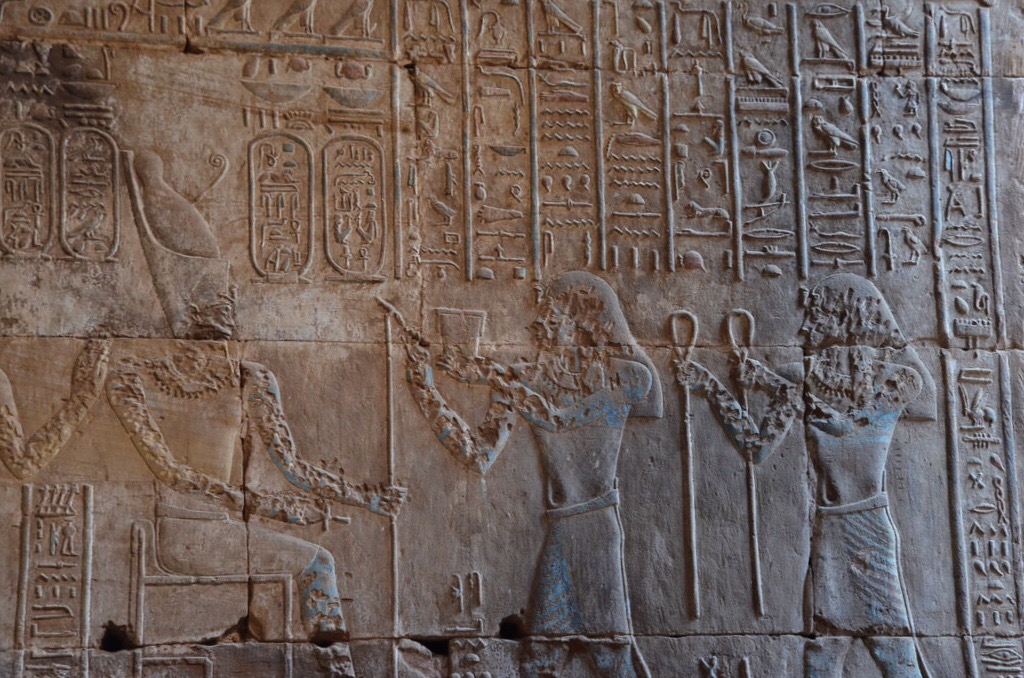 In addition to the three tombs included in the admission price to the Valley, visitors can elect to pay an extra fee to visit the most famous tomb onsite – King Tut’s. Of course I bought the ticket, when else was I going to have that opportunity? The treasures once contained within are nearly all on display in the Egyptian Museum in Cairo and what remains is a small tomb, hastily put together after the sudden demise of the young king. But there’s something else there that most people don’t expect, the remains of the Pharaoh himself. Carter wasn’t a great archeologist, and the damage he inflicted on the mummy as well as those who came after him means that the body can’t be removed at all, otherwise it would be destroyed beyond all recognition. So there he lies, the small king in his small coffin, gawked at by millions of people over the years. This proud boy-king was once one of the most powerful people on the planet, and now he’s a novelty, like a carnival attraction. It’s sad to think about, but of course also a remarkable opportunity for those of us who visit, to look upon the visage of a kingdom long gone and a way of life all but forgotten.

The sun was high overhead as I braced my eyes for the bright light after emerging from the tombs. Walking back to the van I said no thank you to hawkers selling postcards and kids who wanted me to buy statues of ancient gods. Driving away I looked behind me and not for the first time shook my head in amazement. I couldn’t believe then, and still have to pinch myself today, that I was privileged enough to have visited one of the most famous gravesites in the world. But you know what? It’s just one of many so-called once in a lifetime experiences all visitors to Egypt enjoy.