It’s hard not to love Germany, it’s the Europe that most of us Americans think should exist. Well, in parts at least. But what a lot of Americans don’t keep in mind is that vast swathes of the country were destroyed during the Second World War, necessitating rebuilding and reconstruction. There are a few towns and cities though that managed to escape the ravages of war for one reason or another, that allow us to see what life was really like in the Middle Ages, and one of the best examples of a very well-preserved medieval city is found a short train ride from Stuttgart – Esslingen.

Don’t be embarrassed if you’ve never heard of Esslingen before, I hadn’t either. But within thirty minutes of arriving into this small town, I couldn’t help but wonder why that was. It has everything you could possible want, including a history that would impress even the most cynical tourist. 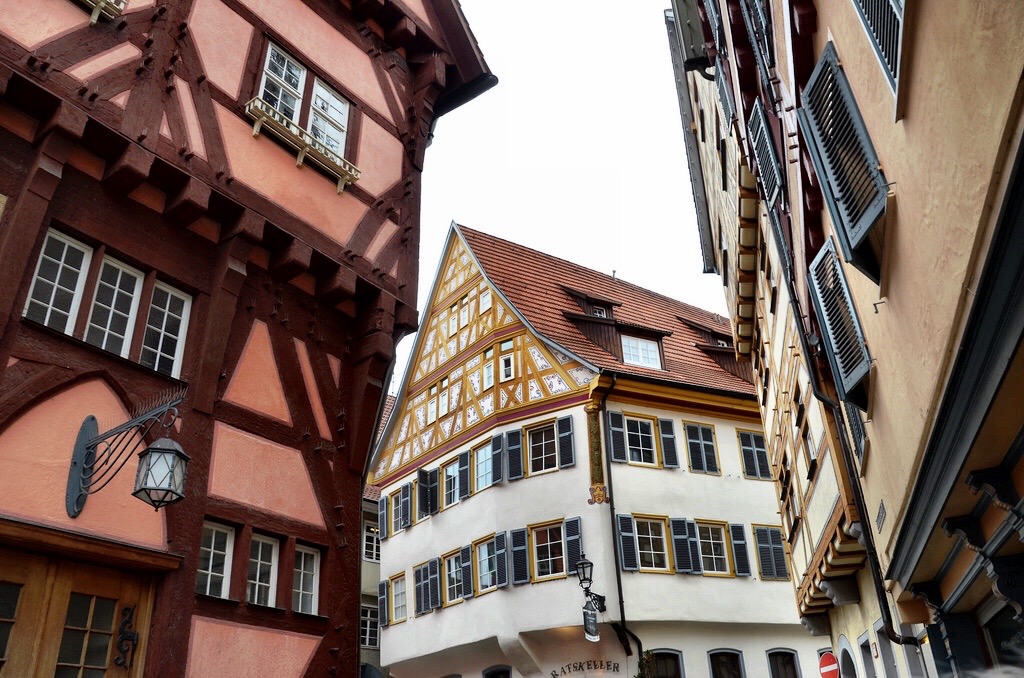 Esslingen has been around for a very long time and has been an important city for most of its history. From a major pilgrimage site to a market town, the major north-south highway in the Dark and Middle Ages ran right through Esslingen creating wealth and power. That power ebbed and flowed over the years, but it’s thanks to its heyday in the 13th-16th centuries that we have the classic German city we find today, and a walk through the city center shows you why immediately.

Esslingen is home to more than 200 half-timbered houses, that classic German design that many of us consider to define the architecture of the country. The oldest inhabited house in Germany as well as the oldest neighborhood can both be found in Esslingen, the bright colors and intricate design still showing off the wealth of its owners. While originally used thanks to its practicality, the half-timbered house in Germany is now considered to be an important part of German traditional heritage and luckily they have been preserved not only in Esslingen, but around the country. 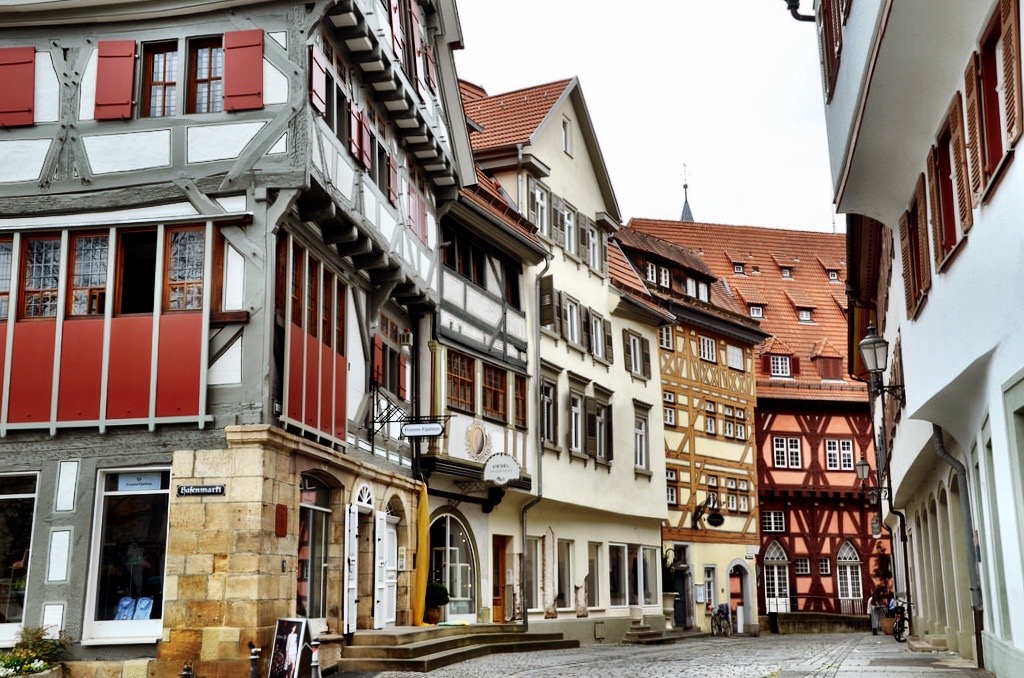 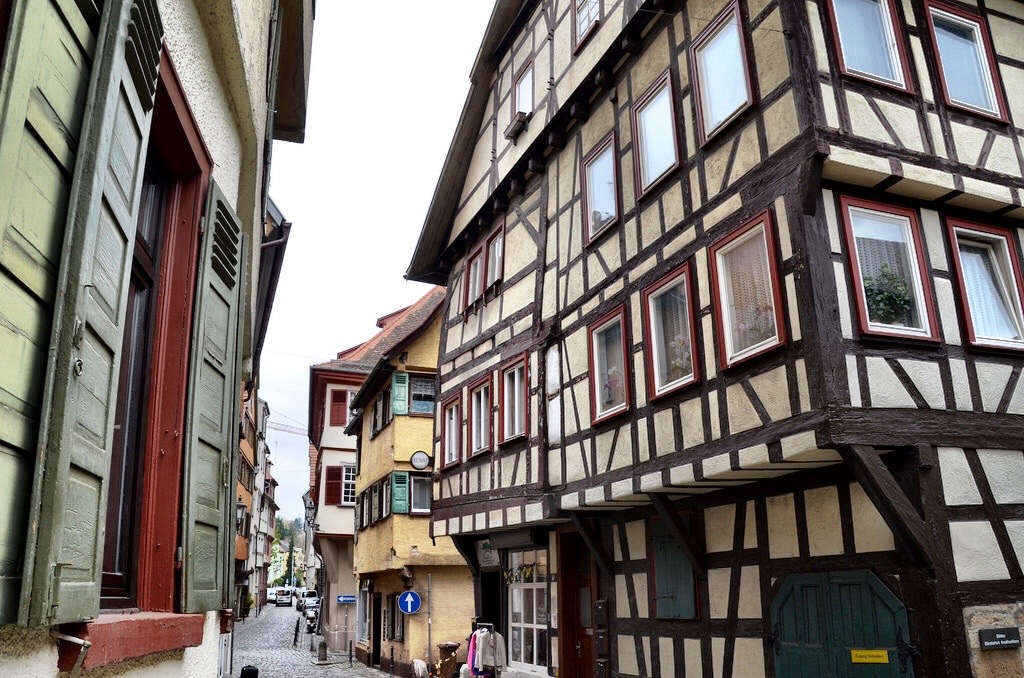 I’d seen these beautiful homes in other parts of Germany, but only reconstructed versions for the most part which is what I assumed the buildings in Esslingen to be. They were just too bright, too beautiful and in far too good condition to be centuries old, but I was wrong. Led around town by a local guide, he shared the history of the town with me, including of these gorgeous homes and shops. Owners have obviously kept them up over the years, repairing them as needed and repainting when the colors faded too much; but always in the same original colors and style of the buildings. It’s amazing to walk down a street completely made up of these old homes, and from my own American point of view the age of them still boggles my mind. Homes continuously inhabited for five hundred years or longer is just something that is hard to imagine. 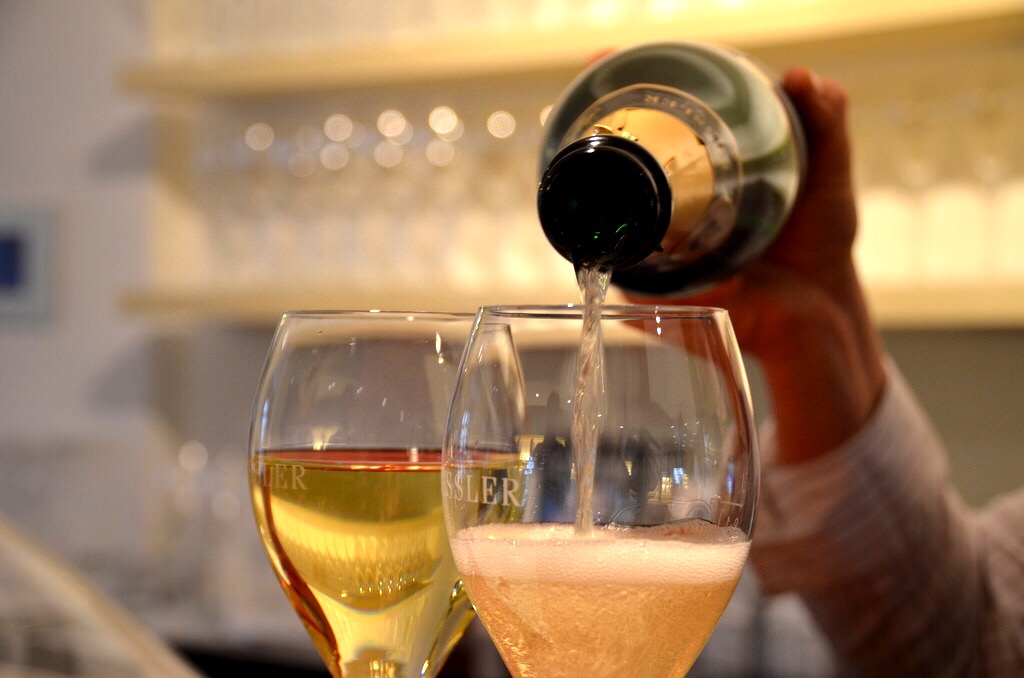 It’s not all pretty buildings in Esslingen; the city has a long history of wine production thanks to the monks who once called it home. The rolling hills surrounding the town are still covered in vines, a signal to one of the main reasons why Esslingen was so wealthy in the Middle Ages. It’s not a common wine though that has inscribed Esslingen into the rolls of wine history; it’s a very special kind of wine known as Sekt.

To call it a sparkling wine or Champagne-like drink is too easy and not entirely accurate, but it’s close. Kessler Wines started in the same production facilities where they work today in downtown Esslingen back in the early 19th century. The founder had apprenticed at the famous Veuve Clicquot in France, learning the secrets of French Champagne production. He brought these basic techniques with him back to Germany but used the local wines in the production of a new kind of sparkling wine. Immediately people knew he was on to something, and the vintages were soon adopted by the wealthy and royal elite as the sparkling wine of choice. In Germany, sekt refers to any sparkling German wine but that term actually was coined in Esslingen. Originally when Kessler tried to ship the bottles, they exploded and so he transported them in large sacks. Sekt comes from an Old German word for sack or bag and the moniker was born. 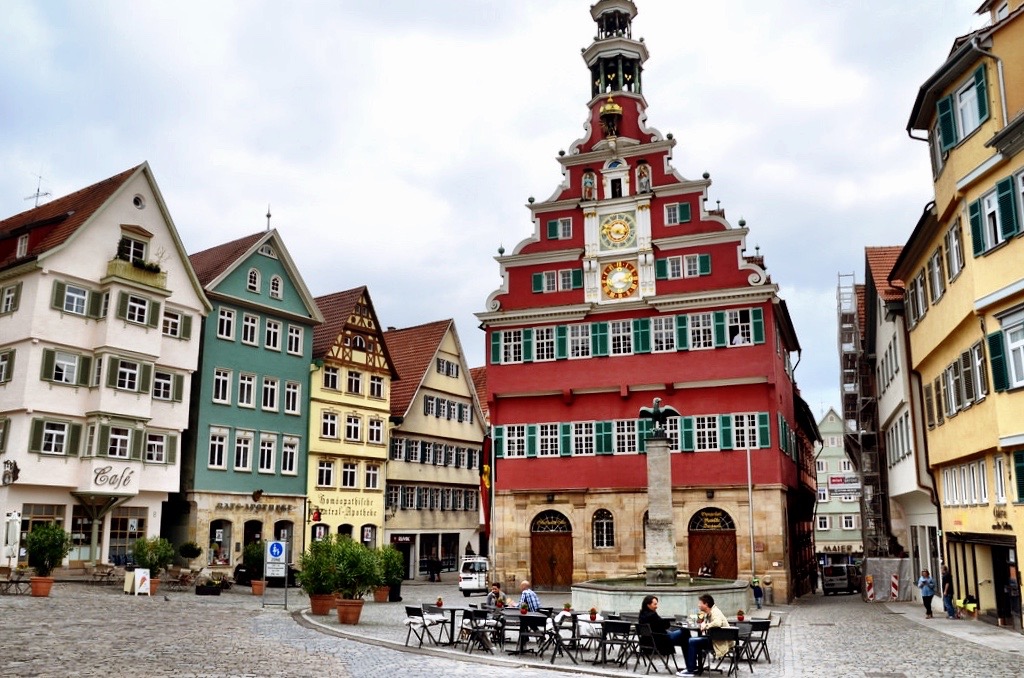 Today Kessler Wines produce many different styles and types of sparkling wines and you can sample all of them in the tasting room right off of the main market square in town. For a great snack, pick up a bottle of Kessler – Germany’s oldest sparkling wine – stop by a local shop for some snacks, and picnic along the river for the perfect relaxing afternoon. 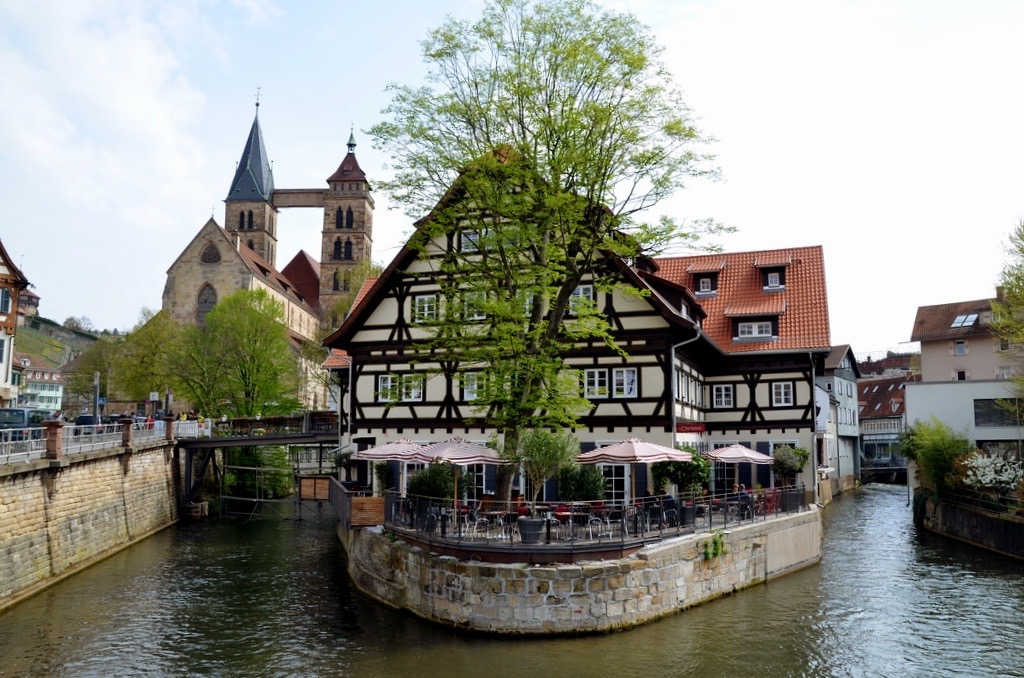 Wandering around the old medieval town somewhat aimlessly, the first thing I noticed were the canals and the waterways that seem to be everywhere. Esslingen sits on the Neckar River and like most old towns the water has played an important part in its history. Bridges crisscross it throughout the town and canals seem to be everywhere, creating a subtle background of rushing water almost everywhere you go.

The half-timbered houses, the canals and the cobblestone streets all come together to create the perfect walk back through time. As I continued to get progressively more lost, I realized that these streets and the entire layout of the city has changed very little over time. Just as I meandered over the river to find a café, thousands of others before me have done the very same thing on the very same spot. It’s rare not only in Europe but in the world to find cities where time seems to have stopped and where everything really is just as it once was, but that’s what makes Esslingen so very special. 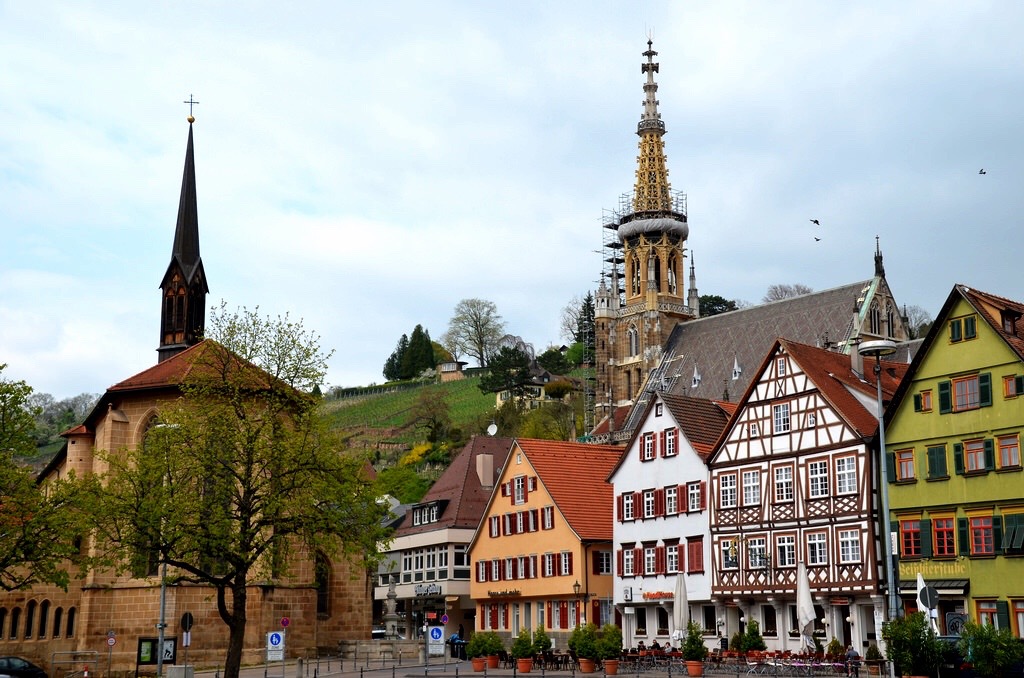 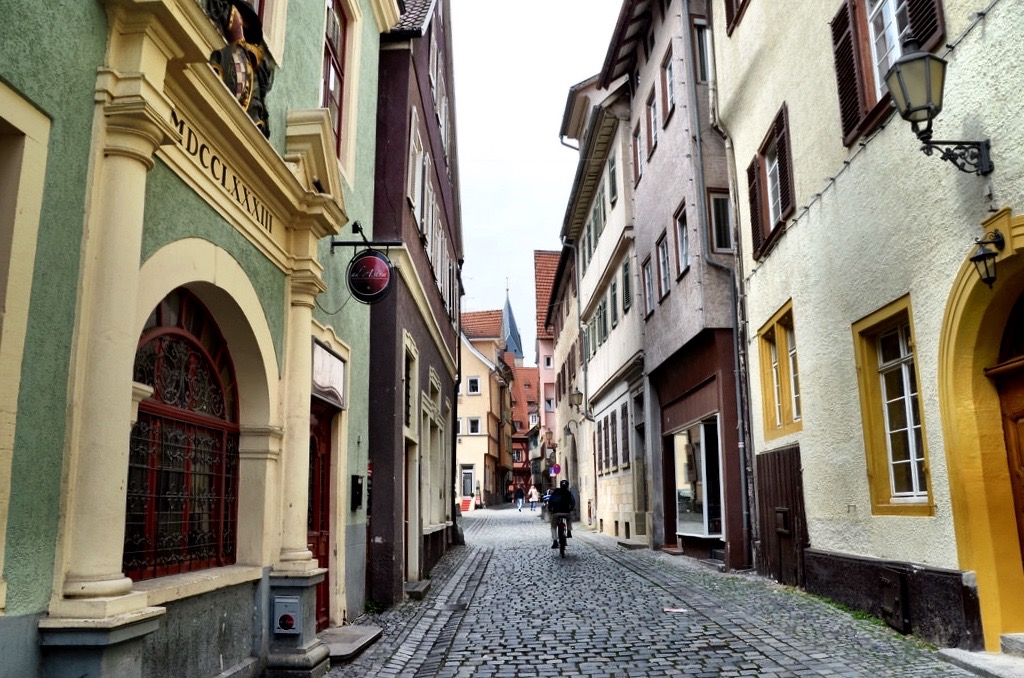 Leaving on the train back to Stuttgart that afternoon, I was perplexed. I couldn’t understand why Esslingen isn’t on everyone’s must-do-in-Germany list, why travel shows and magazine articles aren’t singing its praises. The town gets plenty of tourists, but not nearly as many intrepid souls venture out to explore its alleys and side streets as I think there should be. So if you take away anything from this post, let it be that Esslingen isn’t just a nice city to spend some time in but one that absolutely should be on your own German travel bucket list.

Have you been to Esslingen? What did you think?