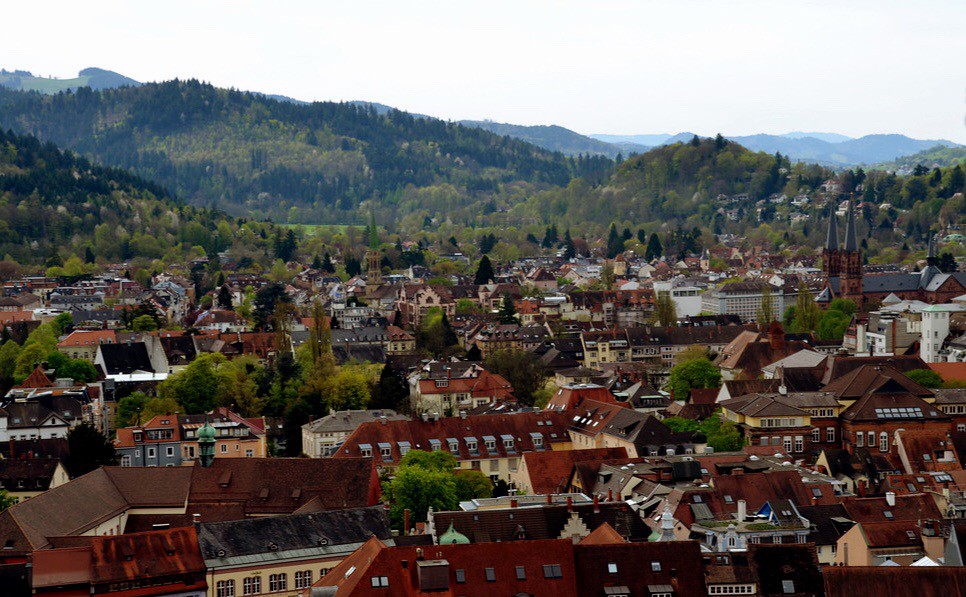 A new city for me when I visited a few weeks ago on a trip with the German National Tourist Board, Freiburg in southwestern Germany quickly became a very pleasant surprise. More than once I caught myself wondering why more people don’t know about this town not too far from the Swiss border and maybe they do, but I certainly didn’t know a lot about it before I showed up on an early summer day. Like many who have visited before me, I began to fall in love with the city and by the time I left, it had quickly risen in the ranks of one of my favorite towns anywhere in the world, not just Germany. So what makes it so great? Rather than an itemized list of stuff to do, because no one has time for that, or just a mix of nice photos, I thought I’d share a few of my favorite moments and quirky things I love about Freiburg hoping that it will inspire you all to add it to your own personal travel list.

The Freiburg Bächle are small water-filled runnels that can be found throughout the old town. These were once common sights in many European cities during the Middle Ages, but only a few are left and Freiburg has one of the most complete systems in the world. They were originally used to fight fires, provide water and to cool off the city in those famously warm summers. Today of course they’re just for show, a pretty reminder of the past and a feature that locals and tourists alike have come to love. I always find comfort in water, and seeing these small canals full of crystal clear water from the nearby Black Forest was a nice feature to my explorations, even if I did almost step into them more than once. That’s a fairly common occurrence though and it’s said that if you do mistakenly step into one, then you are destined to marry someone from Freiburg. Marriage or not, the bäckle are a reason why many people visit, to see a bit of the Middle Ages still alive and well in a modern city. 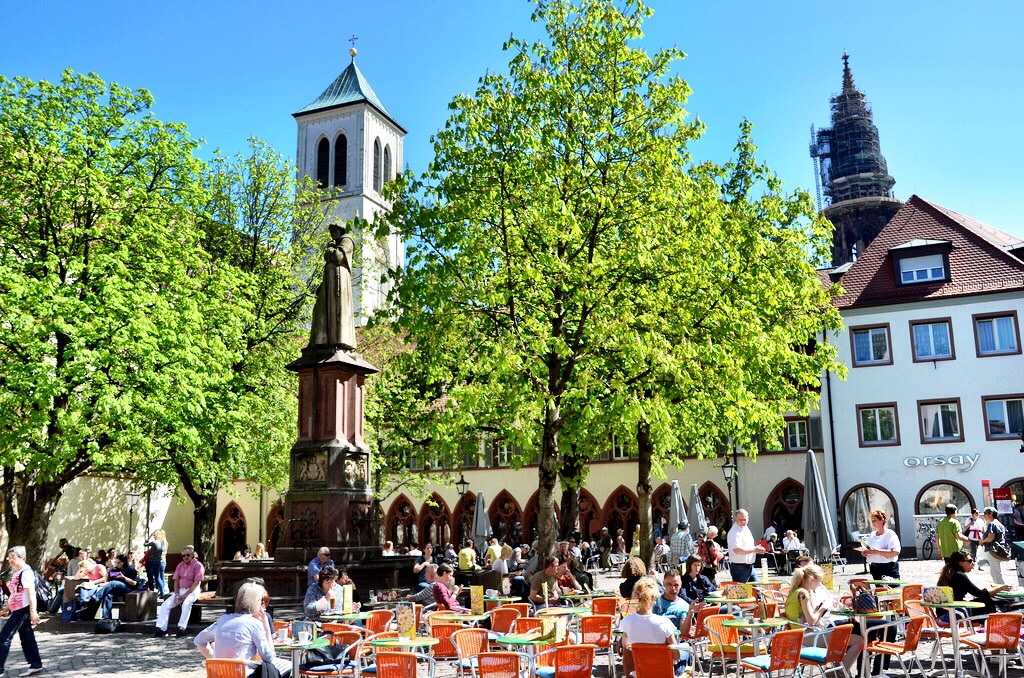 A southern city, Freiburg is famous around Germany for its amazing weather. With more days of sunshine than any other place in the country, it’s not uncommon to see tourists there just to bask in the warm glow of the sun. I was there in mid-April when my hometown of Washington, DC was still cold and rainy. I arrived off the train in Freiburg in a flannel shirt and winter coat and immediately looked like I had come from another planet. My timing was perfect and I arrived just as one of the first days of ‘early summer’ arrived, and all around me I saw folks in shorts and t-shirts obviously thrilled to once again be outside enjoying the spectacular day. Every day was like that for me in Freiburg, the sunshine transforming the colors of the buildings into bright hues that seemed to pop against the backdrop of a perfectly blue sky. As someone who normally only sees Europe in the off-off season, it was a thrill to enjoy a nice day in Germany and to see what a difference experience a warm, summer day can bring. 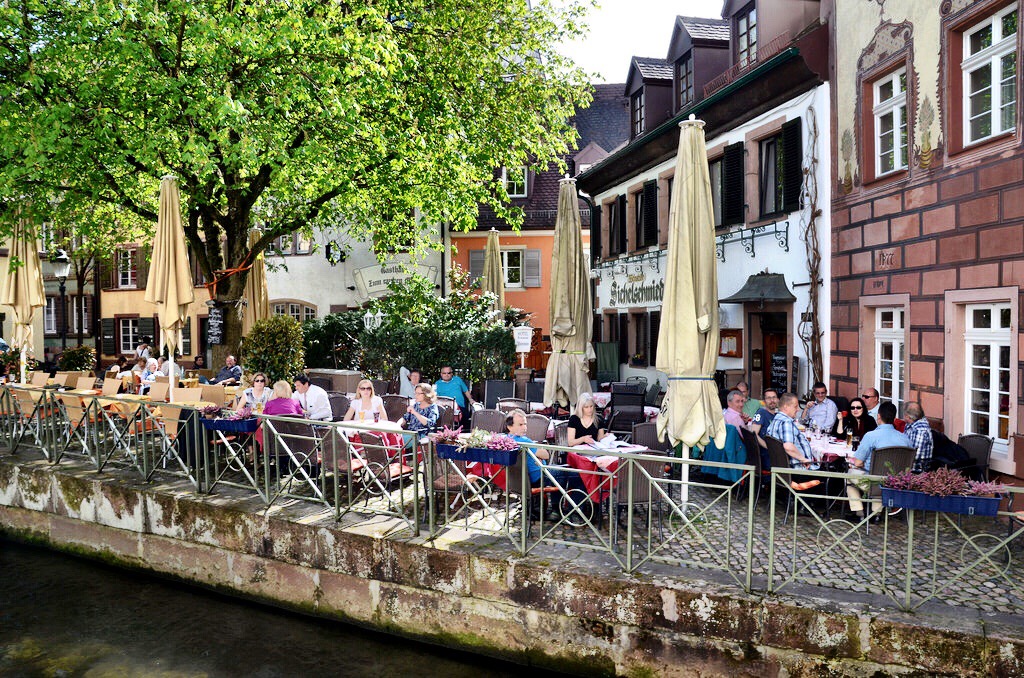 I was surprised by just how much water there is in Freiburg and that more than anything else became the feature I loved most. Sure you have the small bäckle, but there are also canals and rivers creating many special places around town to just sit and relax, or hang out with friends and have a nice afternoon. It’s an old city of course, so the old town can be a little confusing but joining a local guide I was shown all the best spots in town. One of my favorites was near the old mills where today the rush of the water fuels the energy of the crowd as they spend time at the outdoor cafes admiring the scenery. Freiburg is also a very young city, thanks to its impressive and world-famous university, and like most other college towns that constant infusion of youth adds a certain vibrancy to it that similar towns lacking a college don’t have. It’s thanks to those students that the green spaces, which are abundant, are so well used and it’s thanks to them that the city enjoys a general feeling of active living that is fun to experience in person. 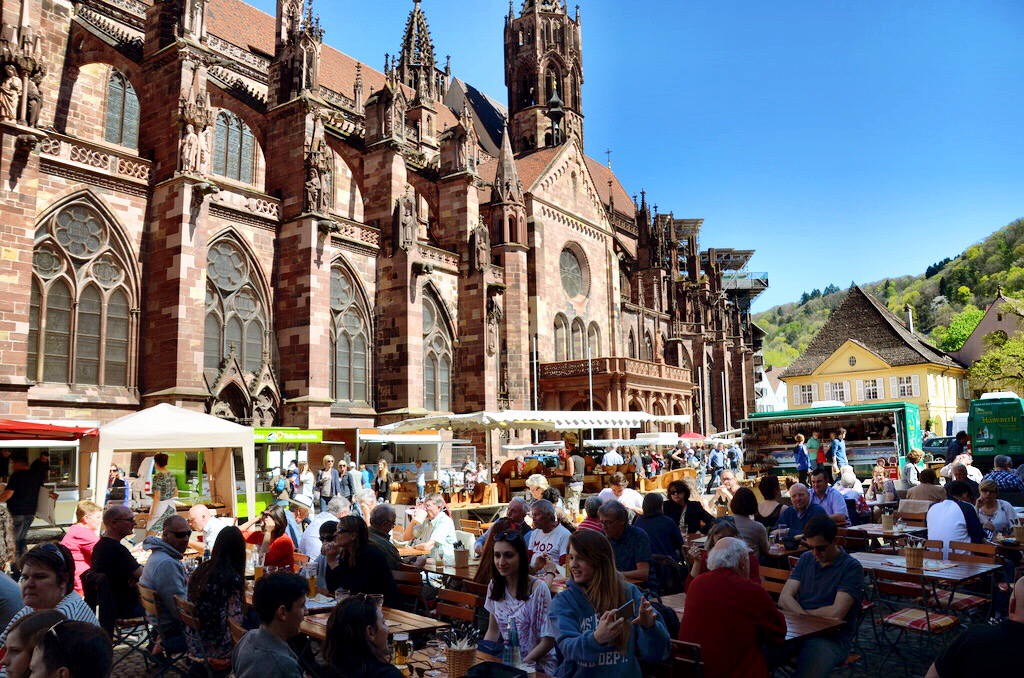 Naturally this can, and is, said about most German cities but it’s not the presence of great food and culture that is important, it’s what form they take that we should pay attention to. Surrounding the massive Freiburg Minster, the city’s cathedral, is a daily market that has probably been in use for centuries. In the middle of town it is the perfect location, and it’s fascinating to consider the fact that we’re a continuation of that important tradition. Selling fruits and vegetables, flowers, toys and crafts there are also of course food vendors, and it was from one of their trucks that I found my lunch one day, a long red Freiburg sausage. Just about every town and city in Germany has their own special sausage recipe, and in Freiburg it’s a longer version that is served with grilled onions on a toasted bun and in my opinion is the perfect lunch on the go. Adjacent to the Black Forest, Black Forest cake is naturally popular as are bakeries in general; I saw more in Freiburg than in any other German city I visited. More than just food, the active university life brings with it a number of shows and performances year-round, meaning a well-rounded cultural experience for tourists as well. It’s just a really fun place to be, for all the right reasons.

I hope it’s obvious just how much I enjoyed my time in Freiburg, a city that’s hard not to love frankly. It’s also tough though to explain the intangible. Sure, I had a wonderful experience there for all the reasons listed, but it’s so much more than that. It was just a general feeling of contentment, and that’s nothing I can give advice about – you’re just going to have to go and experience it for yourself.

Have you been to Freiburg, what did you think?