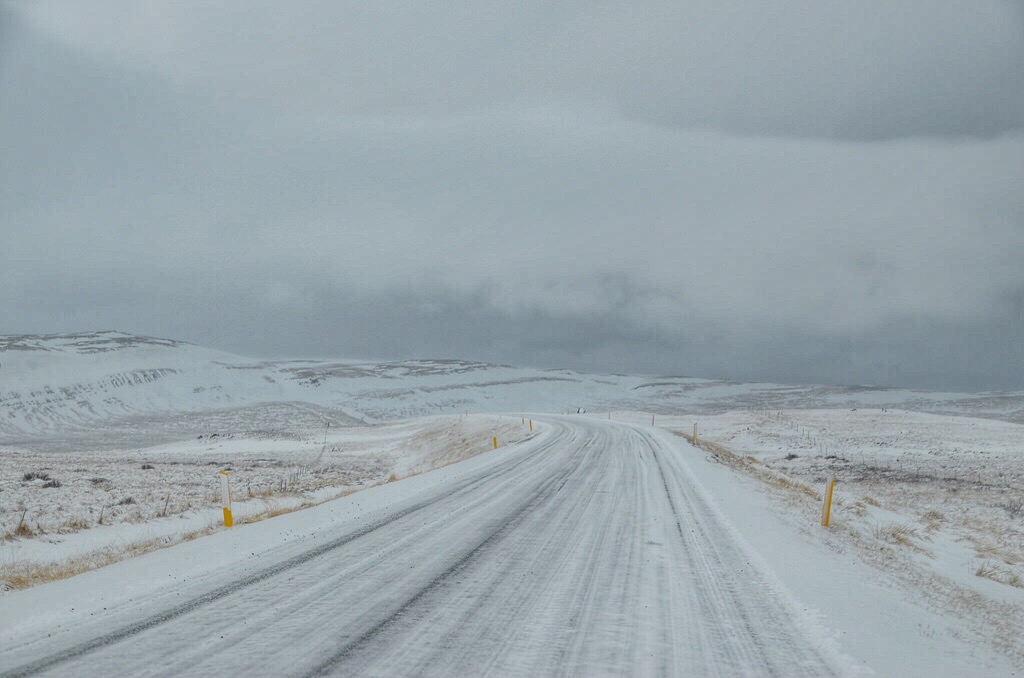 It was a hard decision to make. My partner and I were excited to return to Iceland, a country we both love intensely, and we wanted to self-drive around parts of the country we hadn’t seen before. For a smallish country though there’s frankly a lot to do and see, but we eventually decided to explore what I think is one of the country’s most beautiful areas – West Iceland.

I worked with the company Icelandic Farm Holidays for our trip; they specialize in providing local experiences so that visitors can get to know the country on a more intimate level. Through them we coordinated our farm-hotel stay, our rental car and with their expert guidance put together a loose itinerary for our self-drive exploration of the region. That’s how we found ourselves on the road, leaving Reykjavik one sunny winter’s morning heading towards the unpronounceable but naturally beautiful Borgarfjörður area. 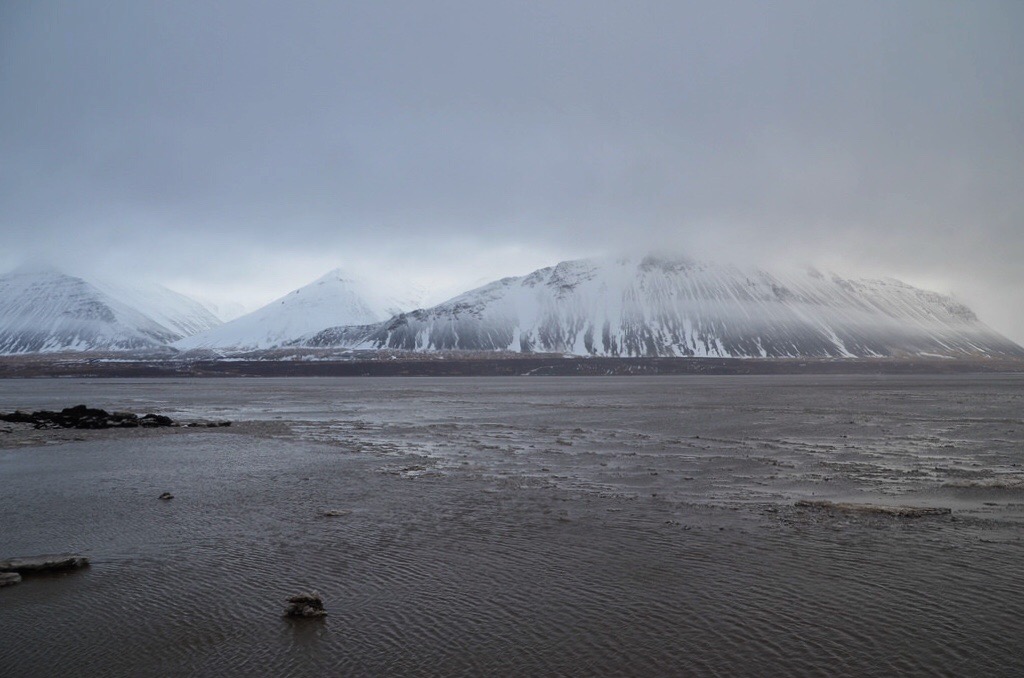 Our first stop was a town we returned to during our trip many times, Borgarnes. We stopped originally to sightsee, but since it was the closest town of any size to our hotel, we were there several times a day passing through or stocking up on supplies. Situated on the rocky coast, I first decided to stop in this small fishing town for one reason – The Settlement Center. While small, it’s an important stop I think for any visitor to Iceland, but especially those traveling around West Iceland. There are two permanent exhibitions, one about the history of the settlement of Iceland by Norse Vikings and the other about the sagas set in the area. Iceland has a very unique history and it was fascinating to learn more about it. While they have their outlandish aspects, the sagas and accompanying records really do tell the history of Iceland in a way that few other countries enjoy. Today’s residents can trace their ancestry all the way back to the beginning and the original settlement of Iceland, a fact that is mind boggling if you think about it. Even better, the exhibition details the sagas that take place in West Iceland, so that driving around you can actually pick out places and names that are mentioned in those quasi-historical texts. It’s the perfect start to an Icelandic adventure and I’m glad we decided to spend the precious time to stop and learn more about the region we were exploring.

There may be a lot to see and do in Iceland but at the end of the day it’s just not a very large country. Thanks to that, getting around and seeing a lot in one day isn’t just possible, it’s fairly easy to do. Before checking into our farm-hotel, my partner and I decided to first explore the surrounding area, to find some of those famous sights we learned about in the sagas. Our first stop included a common element in Iceland – waterfalls. 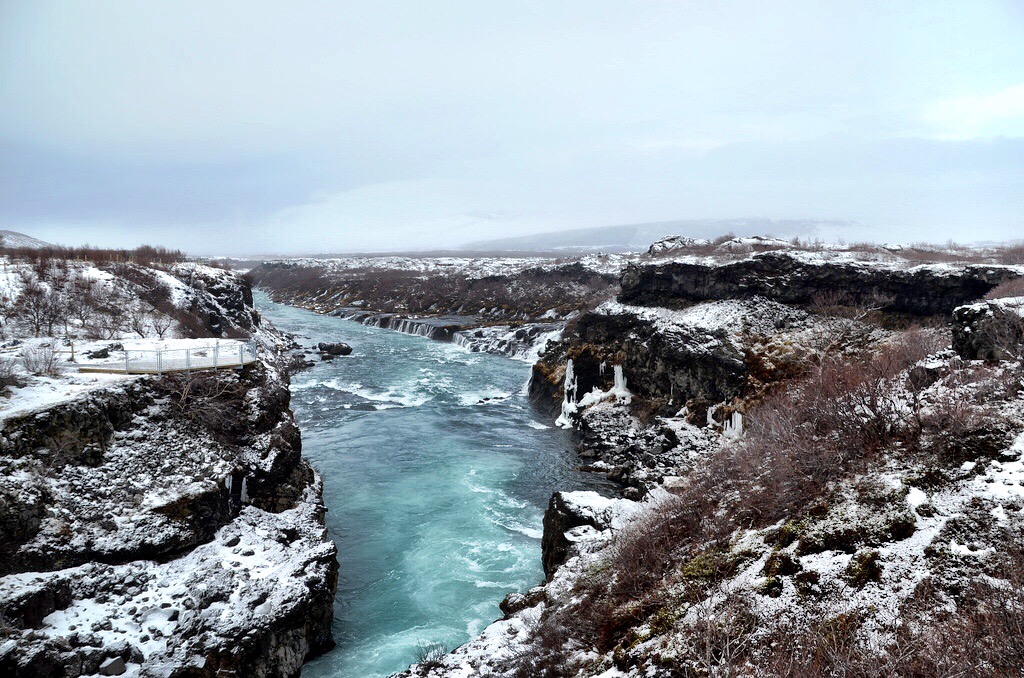 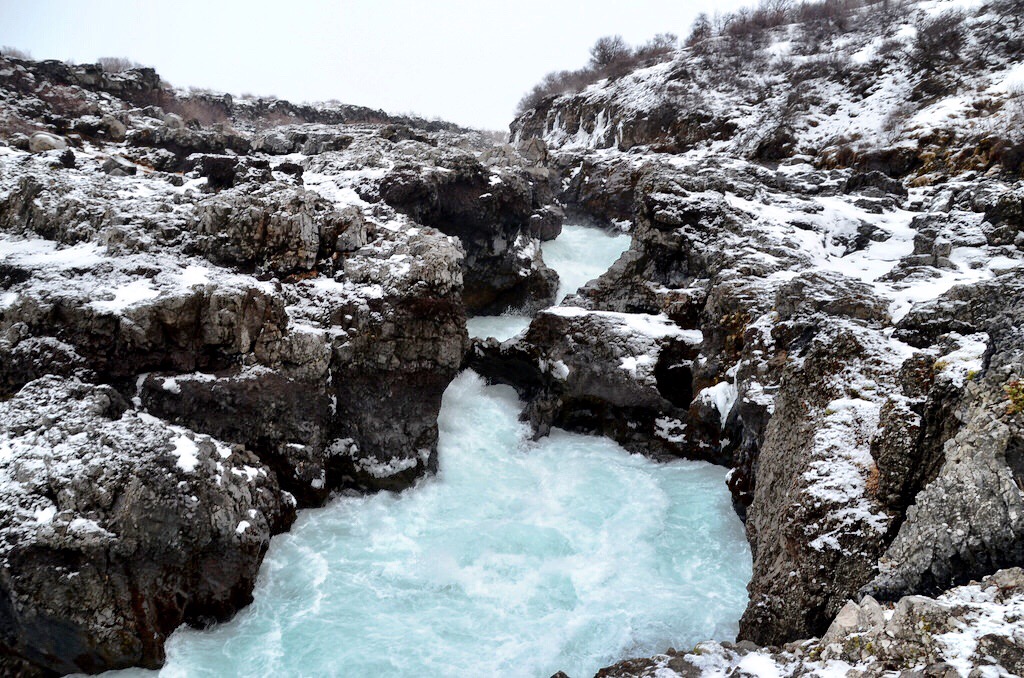 It was winter, and the worst one that Iceland has seen in a long time. Usually a temperate place, we commonly found ourselves in small blizzards or navigating snowy roads wherever we went. Such was the case that afternoon as we followed the advice of our car’s trusty GPS unit as it directed us without incident to the Hraunfossar and Barnafossar waterfalls. Just a few miles west of Húsafell are two beautiful waterfalls, amongst the most famous in Iceland. The Lava Falls or Hraunfossar are unlike many others you’ll see, a long set of waterfalls their beauty comes from the contrast of colors between the river water and the black lava rock over which they spill. My favorite though was the Barnafossar waterfall, the Children’s Falls. A rushing torrent of water that seems to explode out of the rock, its name comes from young children who were sadly killed exploring the mysterious falls. The violence of the water is at first shocking, but there’s a beauty in that power and I found it impossible to pull myself away from just staring at them. Strangely blue water coming out of the volcanic rock, it’s gorgeous and while not as famous as Gullfoss in the south, should absolutely be seen. 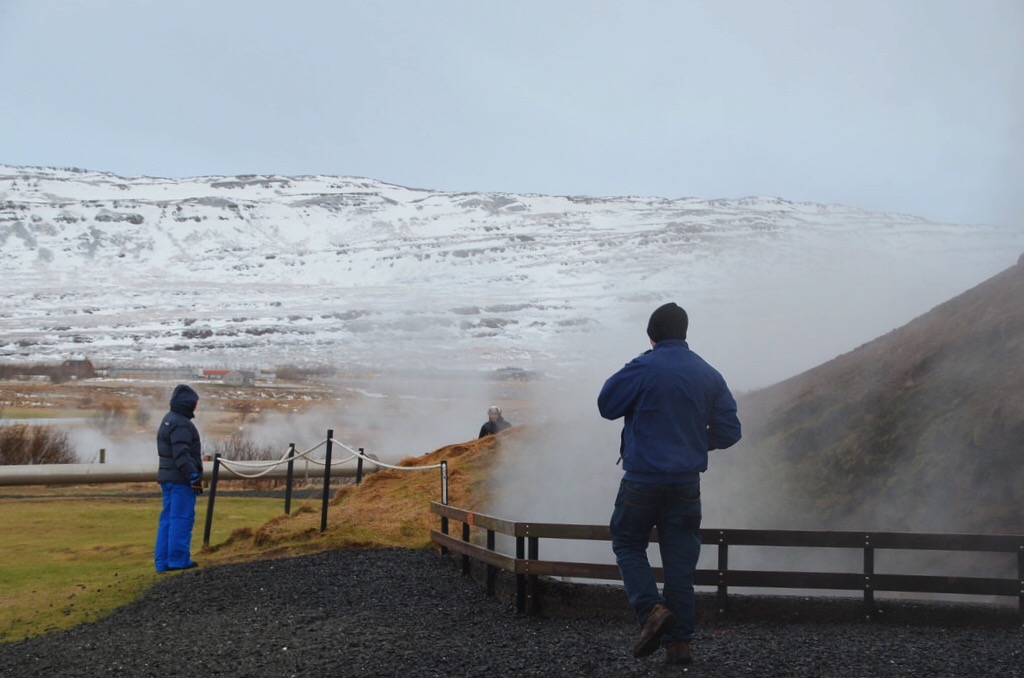 Following the recommendations from Icelandic Farm Holidays, after leaving the waterfalls we decided to stop by another star attraction in the region, the Deildartunguhver hot springs. I’ve visited the famous Geysir springs in the south of Iceland and I think I expected too much from Deildartunguhver because almost right away I was a little disappointed. My guidebook told me that the springs were the highest flow springs in all of Europe, which means the speed at which they emerge from the earth is faster than any other on the continent or amongst its islands. And yes, standing there I could see that the 97 degree Celsius water did indeed flow past very quickly but I didn’t necessarily understand why that was interesting. Standing there with my fogged up glasses, enshrouded in mist and the smell of sulfur, I wondered not for the first time what the allure was, but did find it interesting that these, along with many others around the country, provide power for thousands of people around Iceland. Still, if you’re driving by I’d skip Deildartunguhver unless you really, really like hot springs.

More than waterfalls or hot springs, the best part of our exploration of West Iceland was the drive itself. Guessing that this would be the case before we started driving, my partner and I decided to go slow and take as much time to soak up the surroundings as possible. That, more than anything else, was probably the best decision we made on the trip. Following the sweeping coastline where it meets the black rock mountains, navigating roads that seemed to slither with drifting snow and of course stopping several times to meet Icelandic horses in their fields, gently petting their kind and fuzzy heads – these are the experiences we enjoyed the most. That’s the part of the adventure we talk about and not the museum, falls or hot springs. Standing there in the middle of the road taking a photo as the wind gusted around me is what I remember more than anything else.

Tackling West Iceland was a great decision and we did indeed enjoy just about everything we saw. But in Iceland the journey really is at the heart of any trip, and taking the time to enjoy it properly isn’t just nice, it’s essential.