For better or worse, we all have certain ideas of what to expect when visiting Germany. Most of those ideas actually revolve around Bavaria and the state’s particular traditions, and most are actually fairly hard to find in real life. There are several towns though that encapsulate all of the German stereotypes we love, and I mean that in the best possible way. Rothenburg ob der Tauber, or Rothenburg as I’ll call it from now on, is one such town and thanks to a variety of lucky twists of historical fate, presents to the modern tourist a look back in time at the color and beauty of medieval Germany.

Rothenburg started out life more than a thousand years ago and quickly grew into a wealthy and prosperous community. Several trading routes intersected near the town, and the influx of travelers was a constant boon to the local economy, pretty much just as it is today. After the Thirty Years’ War in the 17th century though, the town’s luck changed and it fell on hard times, no longer of any interest to anyone it seemed. This poverty is one of those historical twists of fate that helped preserve it for us to enjoy today. At the time, the residents of Rothenburg were too poor to build new houses or to remodel, left to linger in severely out of date medieval half-timbered buildings while the rest of Europe enjoyed the glitz and glamour of the Renaissance and later the Enlightenment. By the 19th century it became clear that these centuries-old structures were special – a historical rarity in Germany. Early tourists included Rothenburg as must-see stops on their grand tours and the city once again had life breathed into it. Then came the Second World War.

All around Germany, cities were razed to the ground and many of those old historical buildings were lost. Initially Rothenburg too looked like it would lose that heritage, suffering bombings that destroyed a third of the old town. But then a deal was struck, an American commander whose mother had once visited Rothenburg as a tourist gave the German military a choice, one that was accepted. Truce accepted, the town was spared and that alone preserved for us the town that is visited by millions of people every year. 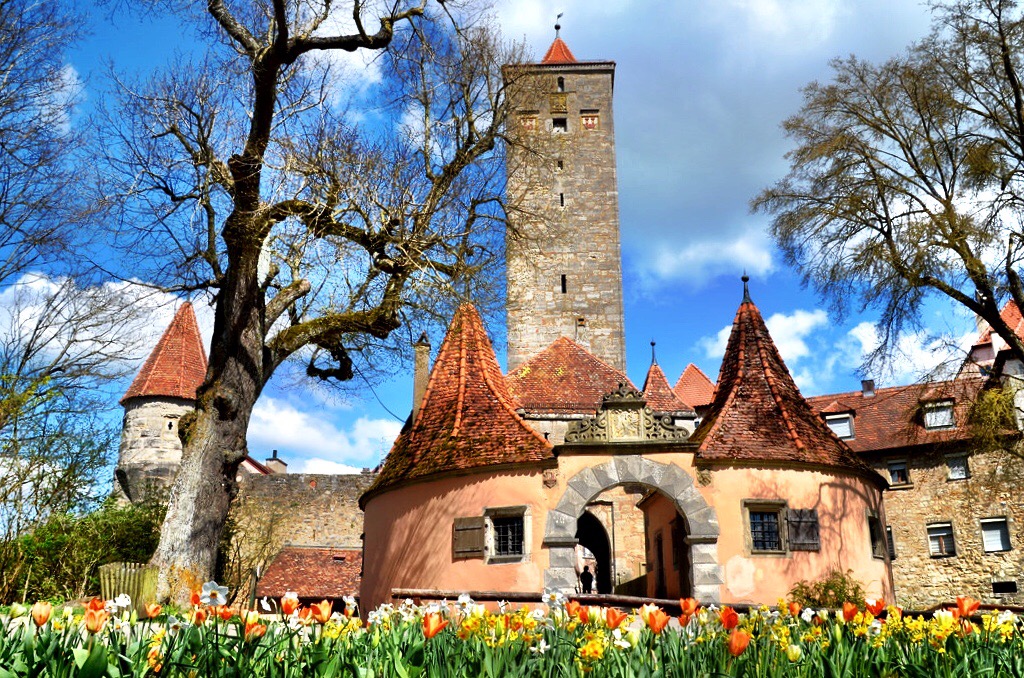 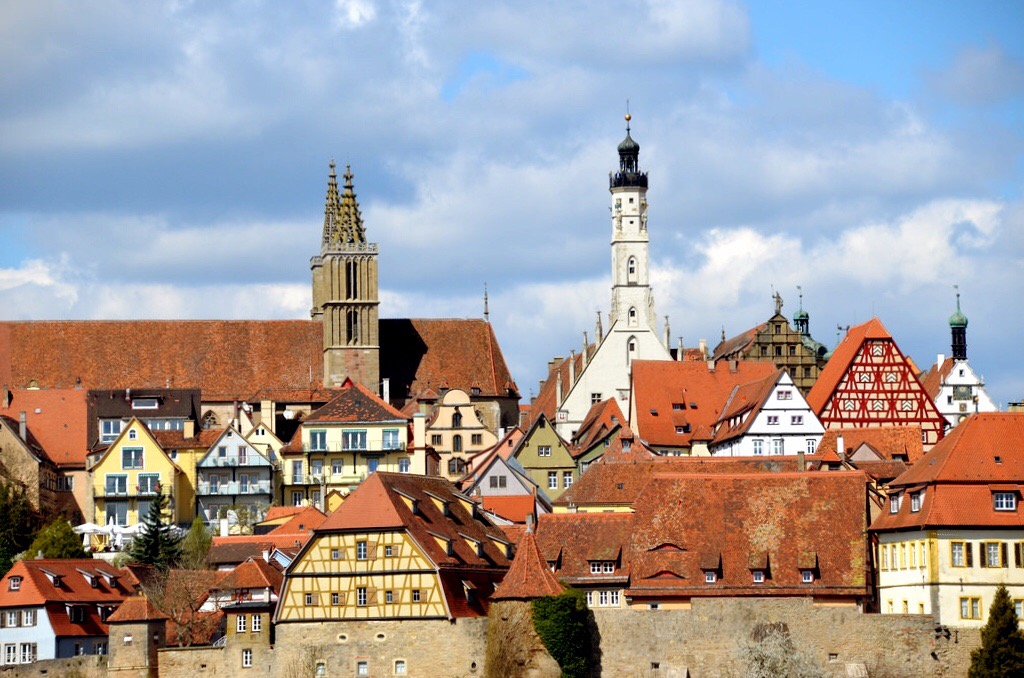 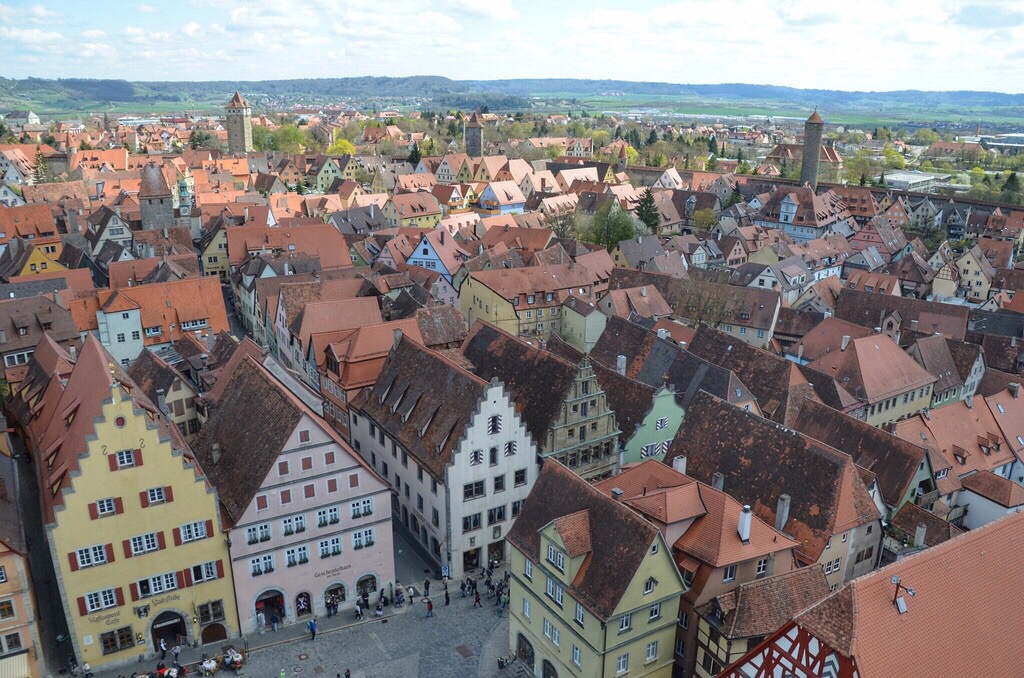 Walking into town it all seemed a little too unbelievable. It all looked too good, too colorful and too much like a scene out of a Disney movie. But that’s why so many people visit, to wander these streets and to admire not just the distinctive architecture, but to discover what life was like hundreds of years ago and to learn more about the fascinating history of the region. The best place for me to start was at the top of the City Hall tower. It takes 241 steps to reach the summit of the 165-foot 13th century tower in the middle of town, but the views are well worth climbing those steep stairs. Bird’s eye view doesn’t do it justice, I felt like I was in a glider soaring high above the town. It’s the perfect vantage point to not just see and enjoy the city views, but to see the nearby countryside and understand the placement of the city walls, gates and towers. But it’s just the beginning. 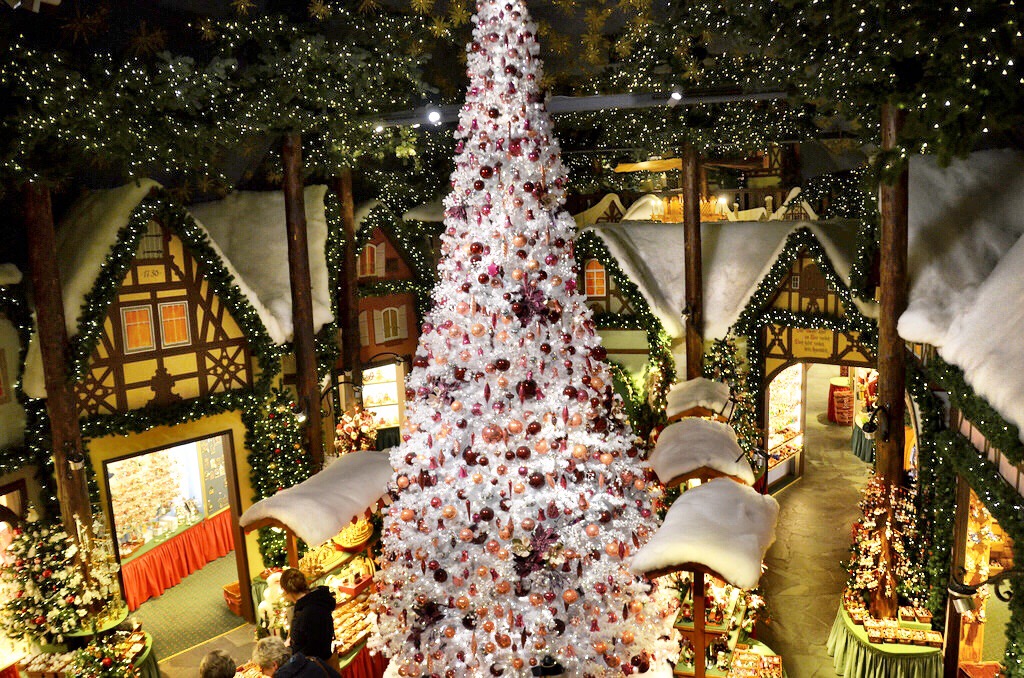 I love quirky and odd museums and Rothenburg has them in droves. The first one I noticed was the Christmas Museum, a small place dedicated to German holiday traditions and which is located in the middle of one of the largest Christmas stores I’ve ever been to. If you want anything, and I mean anything, Christmas related, then this is the place for you. Like so many European towns, there’s also a Medieval Torture Museum, which I don’t typically like, so I skipped it and instead went to the city museum that highlights some of the town’s many historical quirks (including the mayor that drank an enormous tankard of wine to save the town) as well as dungeons and other more grisly findings. Odd for a small town there are a few other museums to spend some time in including one devoted to a particular regional dance, a doll museum and a craft house. Like I said, Rothenburg is delightfully odd. 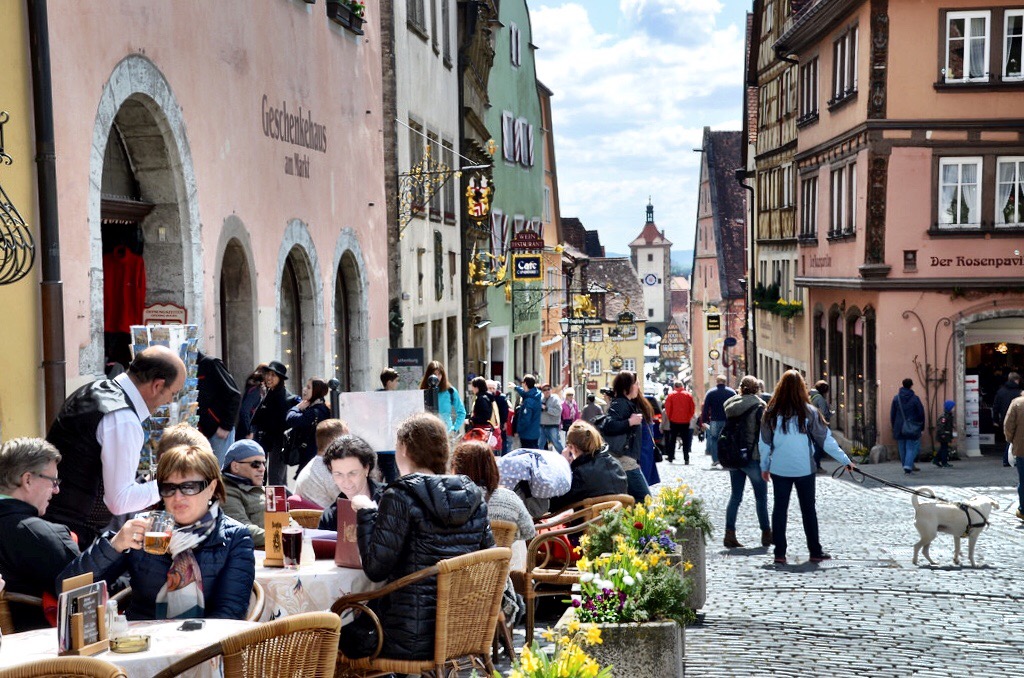 Apparently, according to the brochure I read, many people visit Rothenburg to see St. James’ Church and a holy relic housed in a famously crafted altarpiece. While it was nice, I seriously doubt that’s the reason why many visit, no, instead it’s the overall beauty of the town itself. There’s also plenty to eat, including the regional specialties known as snowballs. Rothenburger Schneeballen, or Rothenburg Snowballs, are small pastries that are common in this part of Germany, but especially so in Rothenburg. They’re simple really, just traditional pastry dough that’s fried and then drenched with powdered sugar. And yes, they’re just as good as they sound. They also come in a wide variety of options, including a chocolate version that I loved especially. They make excellent presents to take back home since they can last for weeks and travel well. If you’re looking for a traditional meal, stop by the Hotel/Restaurant Reichsküchenmeister. A small hotel in a centuries old building, it’s the restaurant that’s the real star of the show. Regional specialties like Pflaumenkuchen (flatbread pizzas) and a variety of sausages make it the perfect introduction to the Franconian food that defines the travel experience in Rothenburg. 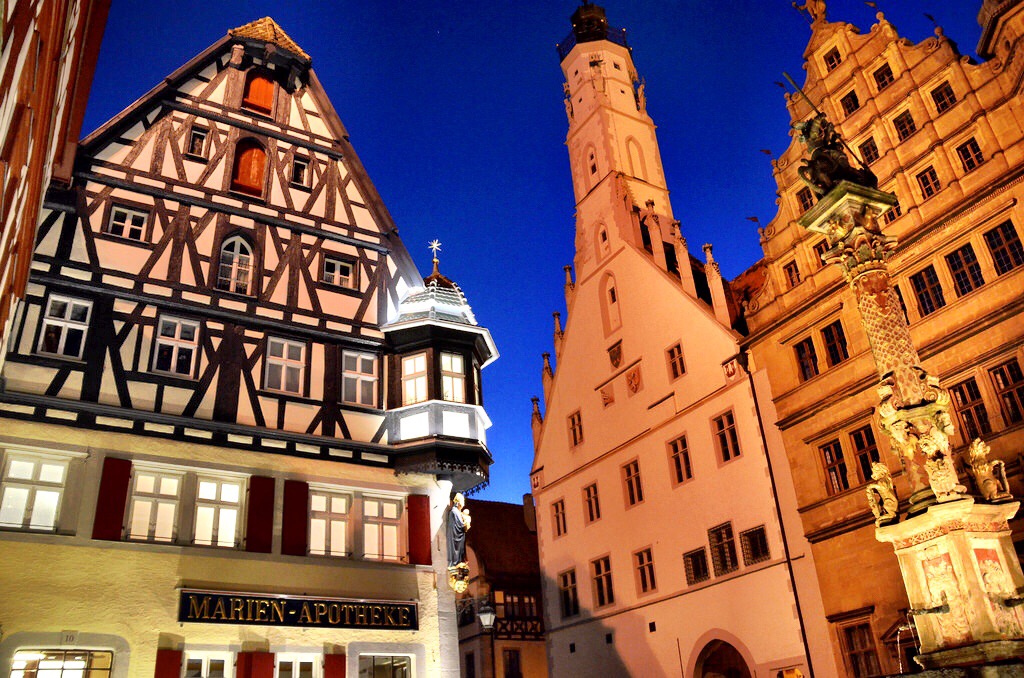 I generally don’t join what I think are typically corny tours, but I had a free ticket and some spare time so I did in fact join the so-called night watch tour in town. Led by a guide in period costume, this one-hour walk around the old city was surprisingly entertaining, not just thanks to the good humor of the guide but the great information he shared. Pretty quickly I changed my opinion about the tour, and by the end of it I was sad that it was already finished. Rothenburg is bright and cheery by day, but illuminated in the evenings a different type of beauty is found, and this tour is the perfect way to experience it. 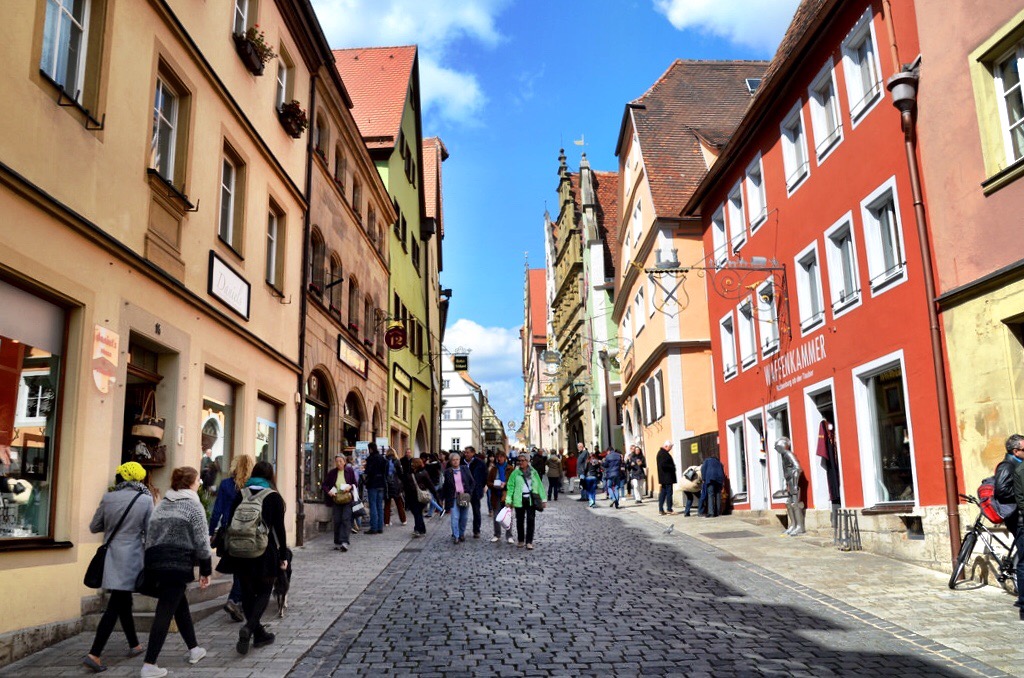 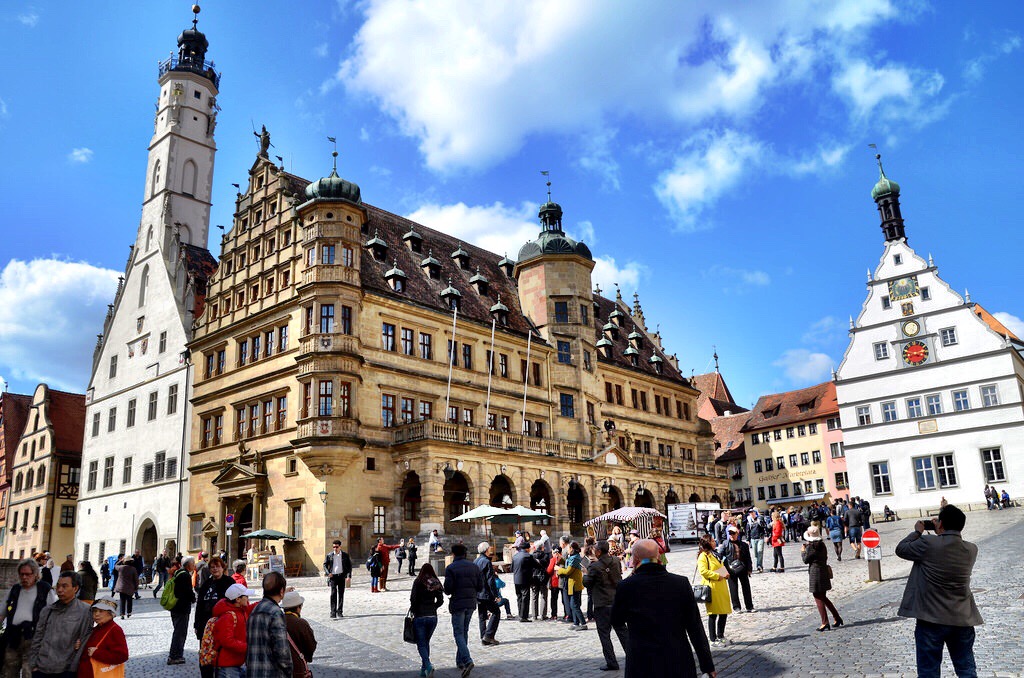 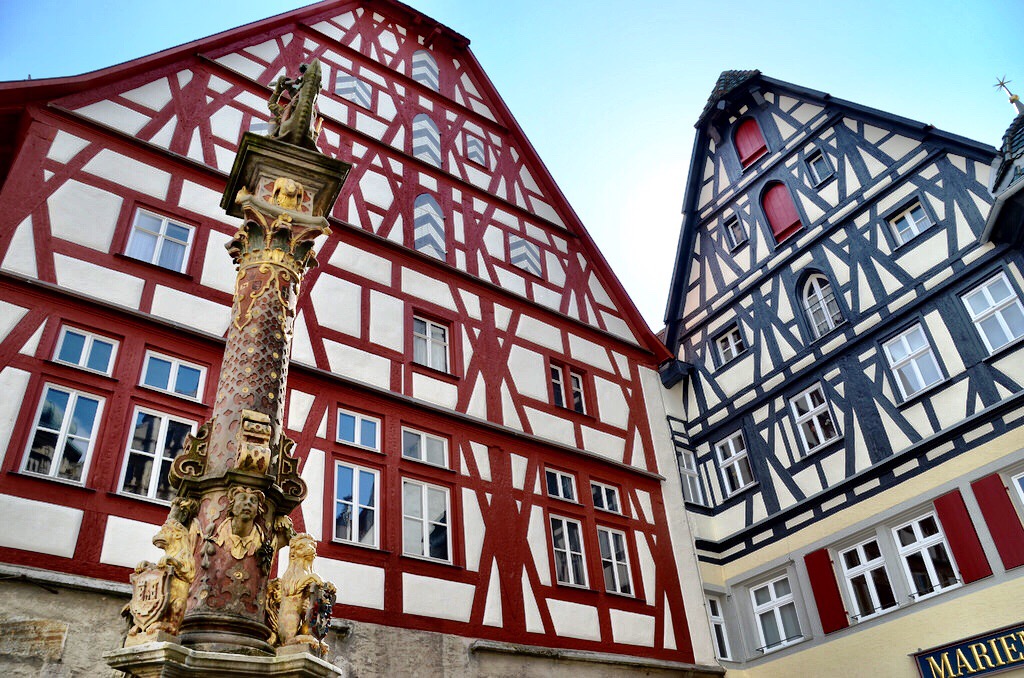 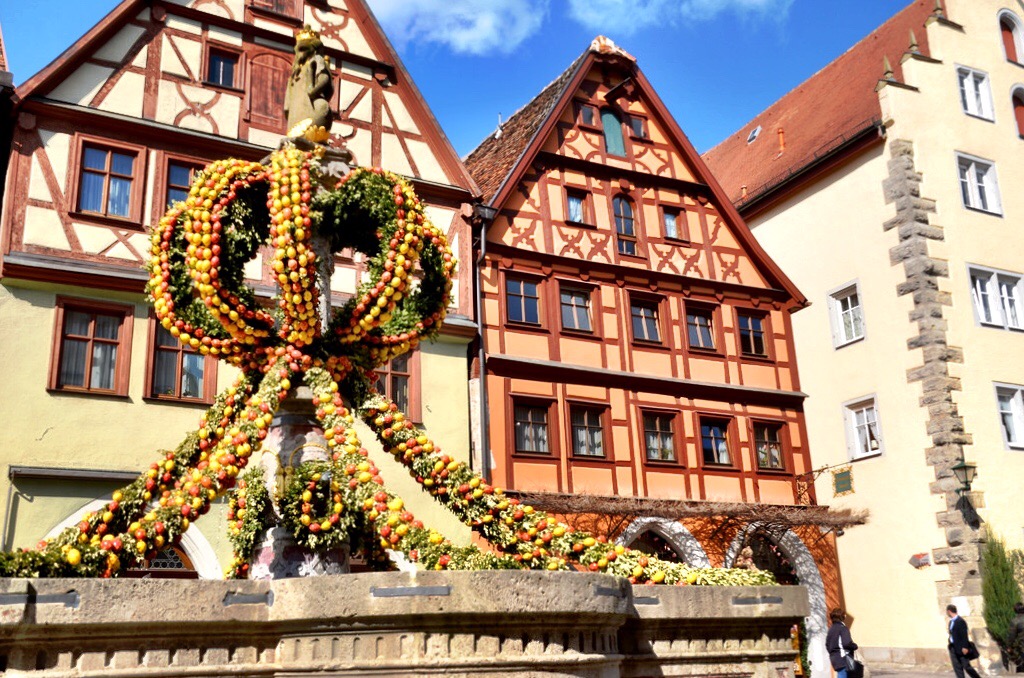 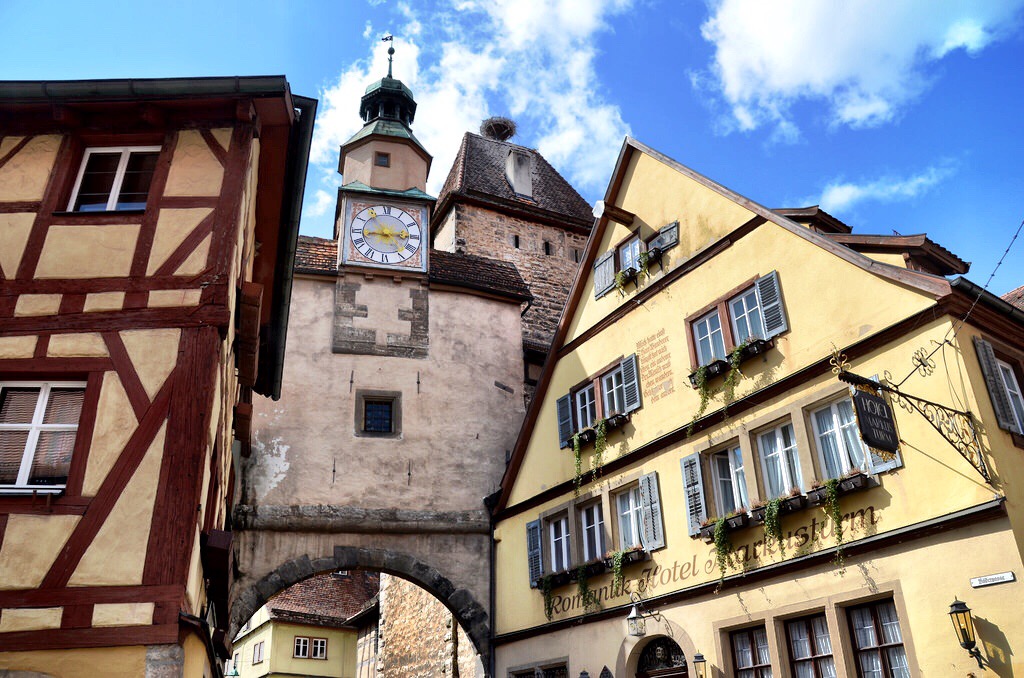 Like almost every other town and city in the world, the best thing to do in Rothenburg is to just wander around aimlessly. It’s not very big and is surrounded by a giant wall, so you’re not going to get lost. No, instead you will see the main touristy areas in addition to quieter parts of town that are no less interesting than the main market, but more secluded and peaceful. You may notice along some stretches of the city wall inscriptions, tributes really. After the end of WWII, Rothenburg raised the money needed to rebuild its walls and buildings through an international appeal. Thanks to its already strong record as a tourist hotspot, people from around the world sent in money to help in the efforts, the names of which are still found on the wall today. This and many other little secrets can still be found, surprisingly enough, even in this admittedly touristy village.

I enjoyed Rothenburg much more than I ever thought I would and instead of a Disney version of Germany, I found the real thing – albeit from an era long since gone. It’s what we think Germany should look like and while I’ve heard many people, German and not, complain about what they consider to be a fantasy experience, that’s why I enjoyed it so very much. Sure, it is fantastical but that’s ok. It’s also fun and mesmerizing and if that’s not an important part of the travel experience, then I don’t know what is.

Have you been to Rothenburg? What did you think?