I don’t know why, but I’ve always wanted to spend the night in an ice hotel. Spurred on by the photos and stories of ice hotels around the world, the experience just seemed so unique and interesting that it quickly made it onto my bucket list. My opportunity only came recently though, while on a trip to Northern Norway. It was there that I was finally able to check this item off of my bucket lit when I spent the night at the unusual but fun Sorrisniva Igloo Hotel.

In 2000, the family who owned outdoor guiding services around the facility known as Sorrisniva decided to try something different. Sure, their position along the Alta River meant plenty of summer tourists and in the winter months they organized snowmobile tours, but the owner decided to go down a new path and built the first igloo hotel. Otherwise known as an ice hotel, the complex ice structure has been built, allowed to melt and then rebuilt every year since. More than that though, it’s a true winter getaway facility with those snowmobile tours I mentioned as well as plenty of snowshoeing and hiking options around the grounds of the hotel. But I wasn’t there to hike; I was there for one reason and one reason only – to spend the night sleeping on ice. 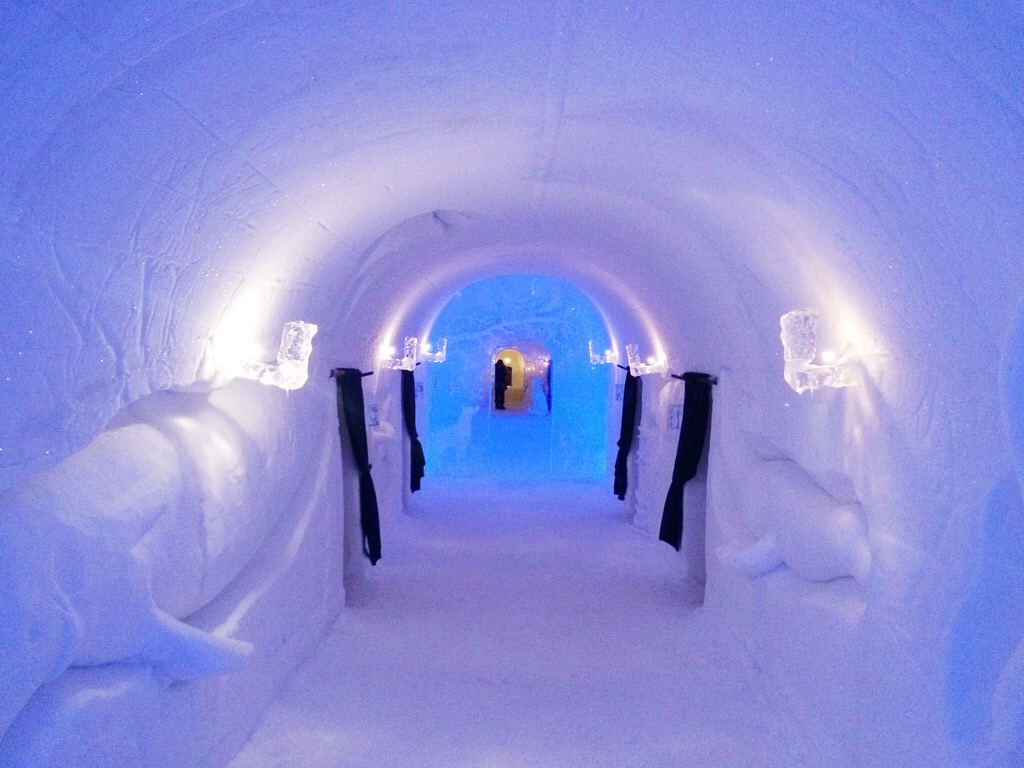 I arrived late in the afternoon, as many guests do, and was immediately welcomed to the hotel by kind staff. The staff here is an important part of the overall experience, because it is an unusual one, and their patience helps make the stay a lot more comfortable than it would be otherwise. Because the igloo hotel is so unique, tourists are allowed in (for a fee) throughout the day to tour the facility, take photos and marvel at those intrepid souls who actually choose to spend the night there. Because of that, guests aren’t allowed to make their ice-rooms their own until the evenings when the last tourists have left.

I was able to catch a glimpse of my abode though, led through icy columns and past ice sculptures that doubled as artwork in this ethereal and oddly quiet place. It’s strange really, walking through a structure made entirely of ice. The temperature inside is kept between minus 4-7 degrees Celsius, in order to preserve the walls of the hotel itself. So it’s chilly, but not as bad as one would otherwise think. But for some reason the hotel had an odd stillness to it, a place devoid of color and life, I felt like Superman entering his Fortress of Solitude. There are several basic rooms that look comfortable and are just little chambers to sleep and not do much more. There are also a few suites, including the one where I spent the night. Called the Northern Lights Suite it was a large room complete with a round bed carved out of the ice, covered in reindeer fur and a spacious living room with an ice-sofa and a fake ice-fireplace. It was homey and comfortable and I couldn’t wait to bed down for the night. But that had to wait, because the Sorrisniva experience is just that, an experience. 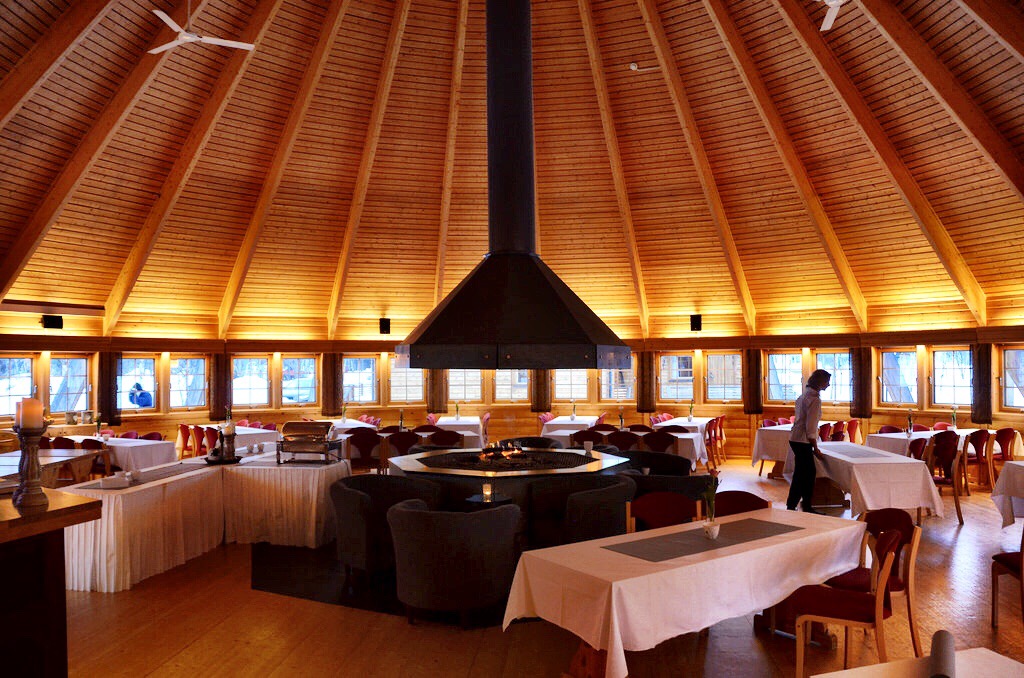 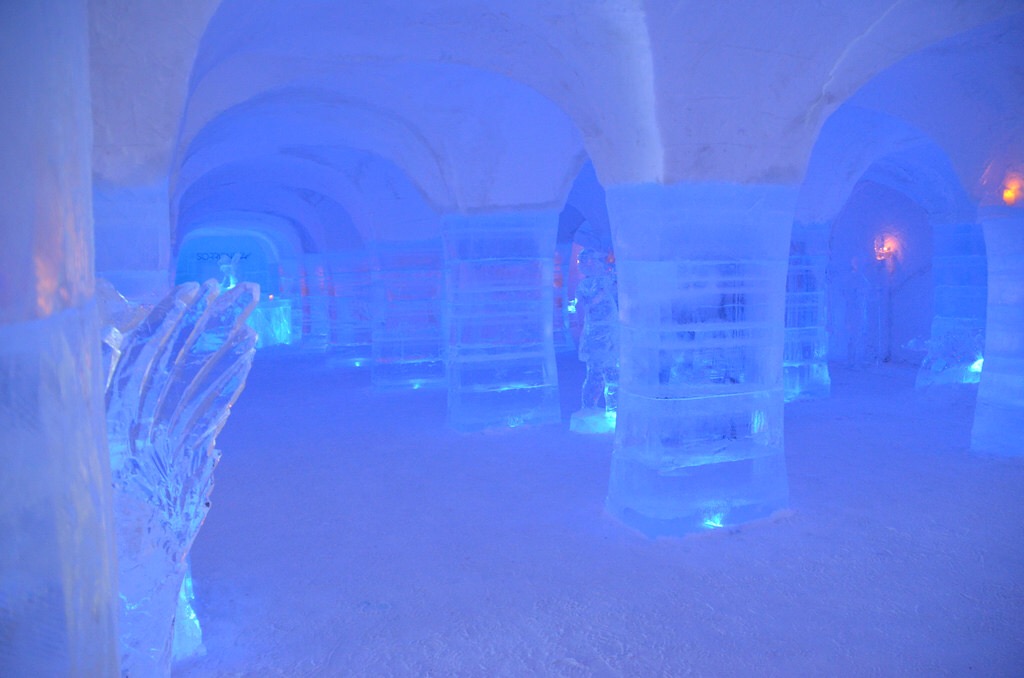 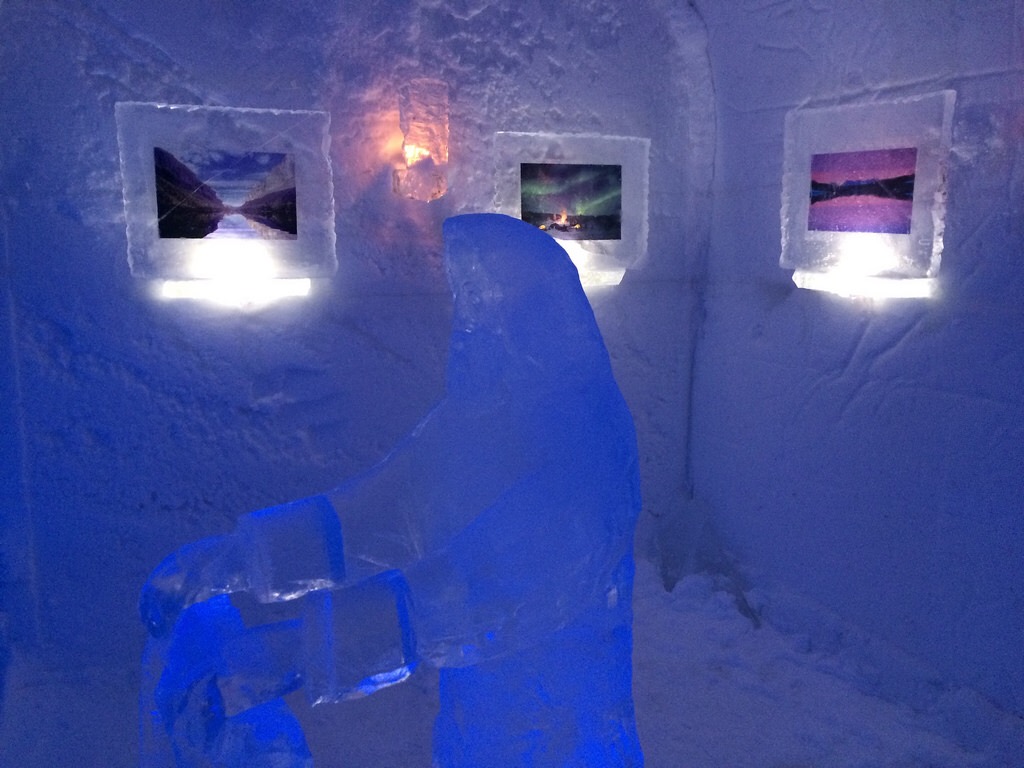 The hotel and facilities are about 20 kilometers from Alta, what I would politely call the middle of nowhere. There’s no WiFi at the hotel either, so it’s really a quiet and serene place. That can be a difficult adjustment for an active traveler like myself, but I quickly fell into the slower pace of life and enjoyed spending some time by the roaring fireplace, reading a book and sipping some coffee. The on-site restaurant is thankfully amazing, particularly since that’s the only meal option around. I tried a three-course menu that featured very traditional Norwegian cuisine but served with modern aesthetics in mind. It was a great dining experience, and I finished full and happy and ready to head to my ice bed.

A few notes about the awkward logistics of staying in an ice hotel. First, the bathrooms. Obviously the ice hotel itself doesn’t have them, so guests must instead use facilities in the main building itself. This was ok, but in the morning I was not a fan of the group, locker-room style showers. Sorrisniva considers itself a luxury hotel, but no luxury hotel I know would have strangers bathing next to each other like that. Otherwise, the facilities were fine. You’re also not allowed to bring your luggage into the igloo hotel since it is so very cold. That means you have to store them in a small storage area and change before heading to bed. Believe me, there are more fun things in life than trekking out into the Norwegian winter night in your pajamas, but it is all a part of the experience.

Before going to bed, the staff at the igloo hotel equip its overnight guests with sleeping bags rated for some of the harshest conditions in the world along with pillows and blankets. I was worried how cold it would be, so In addition to all of that I wore thermals, hat and gloves and looked like I was trekking through the wilderness instead of going to bed. Inside the rooms, the ambient light is kept on throughout the night, casting a soft blue hue on everything and creating a mood that is strange but special. It’s also starkly quiet, the thick walls of each room cancelling out any noise you might hear from other guests. Breathing in the crisp air, bundling up in reindeer hides on my circular ice bed, I settled in for the evening, hoping I wouldn’t need a bathroom break in the middle of the night. 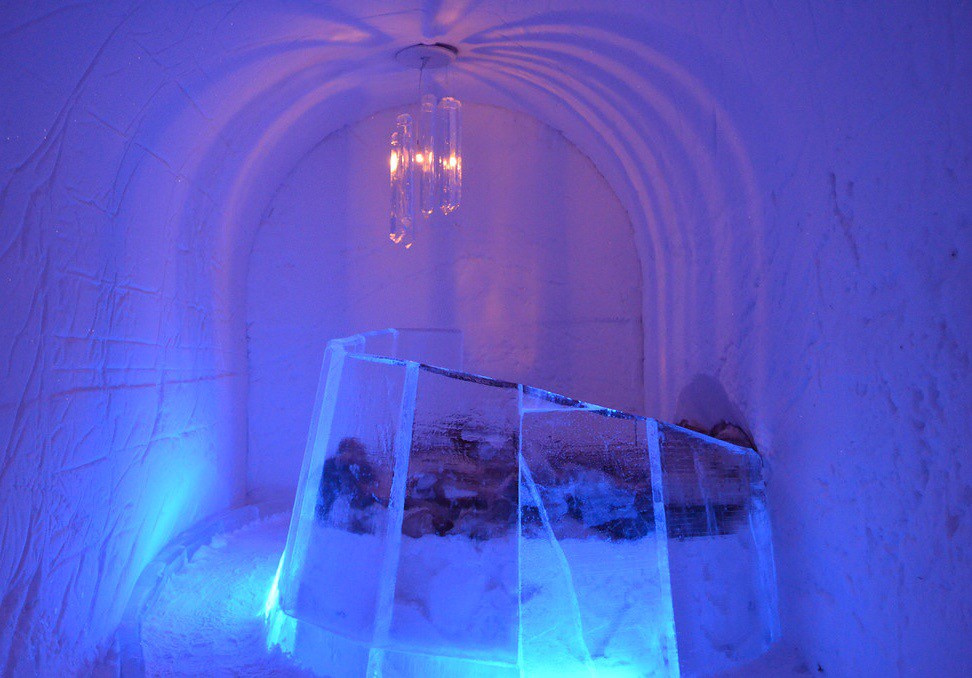 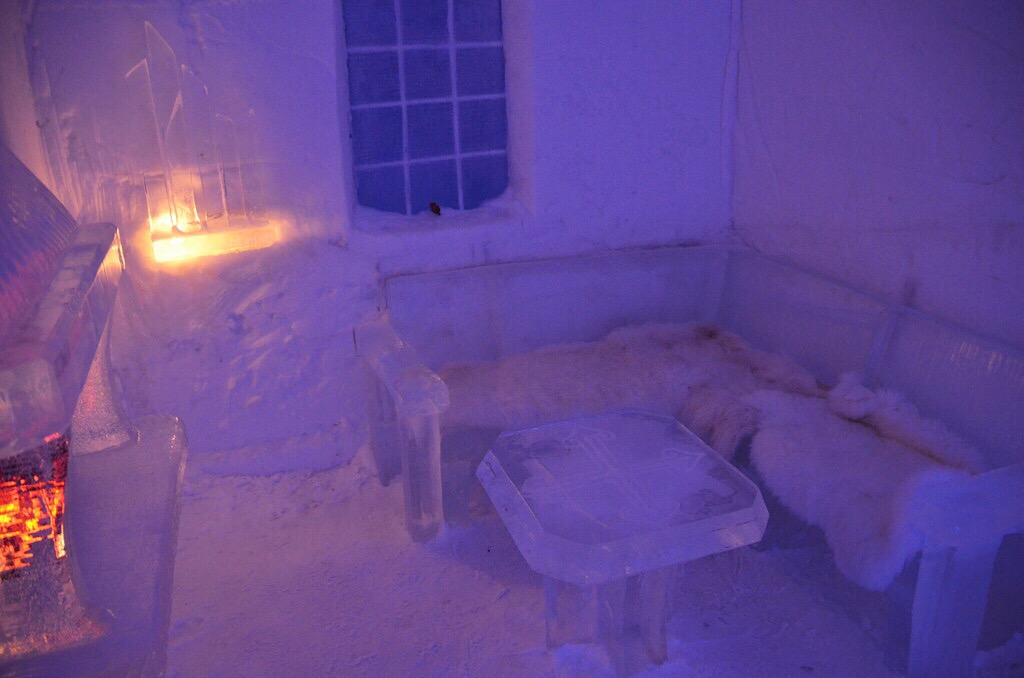 I didn’t have great expectations to be honest, I wanted to try the igloo hotel for the experience and not for its comfort. That’s why I was so surprised when I woke up, having no idea of the time and feeling well rested for once. The light inside the ice hotel is always the same, so my body clock was confused when I looked at my watch and discovered it was well past 8 in the morning. For someone who seems to always get up at 6:30 or earlier no matter where I am, this was a feat of Olympic proportions. Putting on my shoes and trekking back inside to the heated facilities, I slowly recovered from one of the best night’s sleep I’ve ever had. Not even the best of hotels can vie with the dead quiet of the igloo hotel and that sensory deprivation was what I needed to enjoy a marvelous evening of slumber.

Eating a hearty breakfast I left the igloo hotel that morning, feeling strangely sad at leaving. I said goodbye to the other guests who too were leaving, we had formed an icy bond during the course of the stay. I understood then and there what the allure is of this, and other similar hotels around the world. Sure, it’s quirky and odd and makes for a great story to share with friends and family, but it was also fun. I don’t mean fun in the “dogsled through the woods” or other active way, but a more laid-back enjoyment. It’s a different pace of life and one that I sincerely hope to experience again.

Have you ever stayed in an ice hotel?