German food and I get along well – very well, in fact. My unique set of picky eating tendencies is rewarded there instead of being regarded as a bizarre eccentricity, as I experience in most places around the world. Meats, cheeses and great desserts – they all fit me to a T and I know that whenever I visit I’ll never go hungry and in fact need to schedule some time in to run off my newfound culinary delights. On my most recent trip to Germany I explored a wide swathe of the country, from Freiburg in the south to Hamburg on the northern coast and along the way found traditional staples I’ve grown to know and love over the years as well as a few newfound items that surprised me and of course delighted my taste buds. I thought I’d share a few of those new foods with you all today, some of which may be new to you as well. 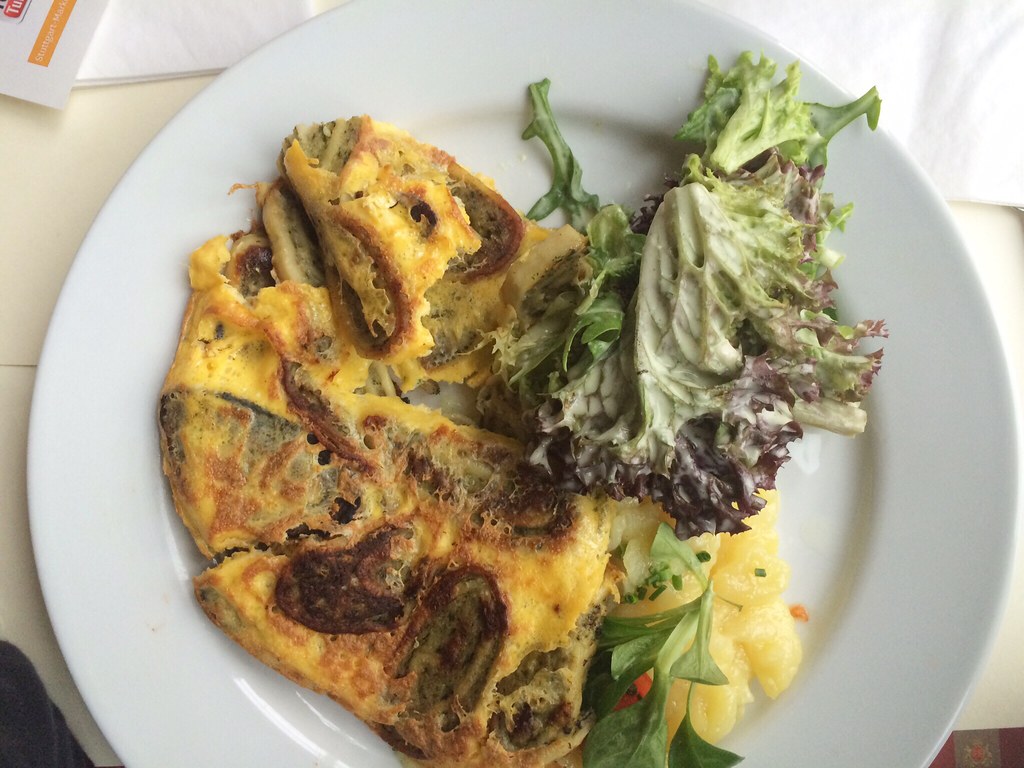 The region of Germany known as Swabia has many culinary peculiarities but my favorite was the traditional maultaschen I found in Stuttgart. Sadly, when translated this tasty dish is called ravioli on English menus, but that’s not entirely accurate. These savory pillows of pasta started when a local monk decided he didn’t want to abstain from meat during fasts, so he mixed minced meat with spinach and wrapped it in noodle dough. The dish eventually caught on and is now a very common and traditional meal to find throughout the region, but especially in Stuttgart. There are many ways to eat maultaschen, while it is typically boiled in a broth, I decided to try a version cooked with eggs. What arrived at my table looked more like an elaborate omelet than a ravioli dish, but after a few bites I knew I had found something special. I couldn’t help myself and soon ate the whole portion, looking around for a little more. It was a hearty but delicious meal and one that is still important to Stuttgart and the areas surrounding it.

Rothenburg is a traditional German town that thrives on providing visitors with half-timbered buildings and experiences that in many ways encapsulate a typical German experience. But the city also has a special snack that is unique to its streets and nearby villages, something that almost didn’t make it out of the kitchens of local homes. Rothenburger Schneeballen, or Rothenburg Snowballs, are small pastries that are common in this part of Germany, but especially so in Rothenburg. They’re simple really, just traditional pastry dough that’s fried and then drenched with powdered sugar. They were originally wedding desserts, made days or even weeks in advance giving the cooks enough time to concentrate on other elements of the celebration. Then a local baker in Rothenburg decided to start selling them at his shop in town and the rest is history. They immediately became popular with locals and when tourism picked up in later years, they became the must-have souvenir from town. Since they’re hard and can last for weeks – even months – they’re the perfect gift. Nowadays you can get the traditional version as well as ones covered in chocolate, hazelnuts or cinnamon-sugar. Regardless of which one you go for, they’re all excellent and when paired with a strong coffee are the perfect afternoon snack. 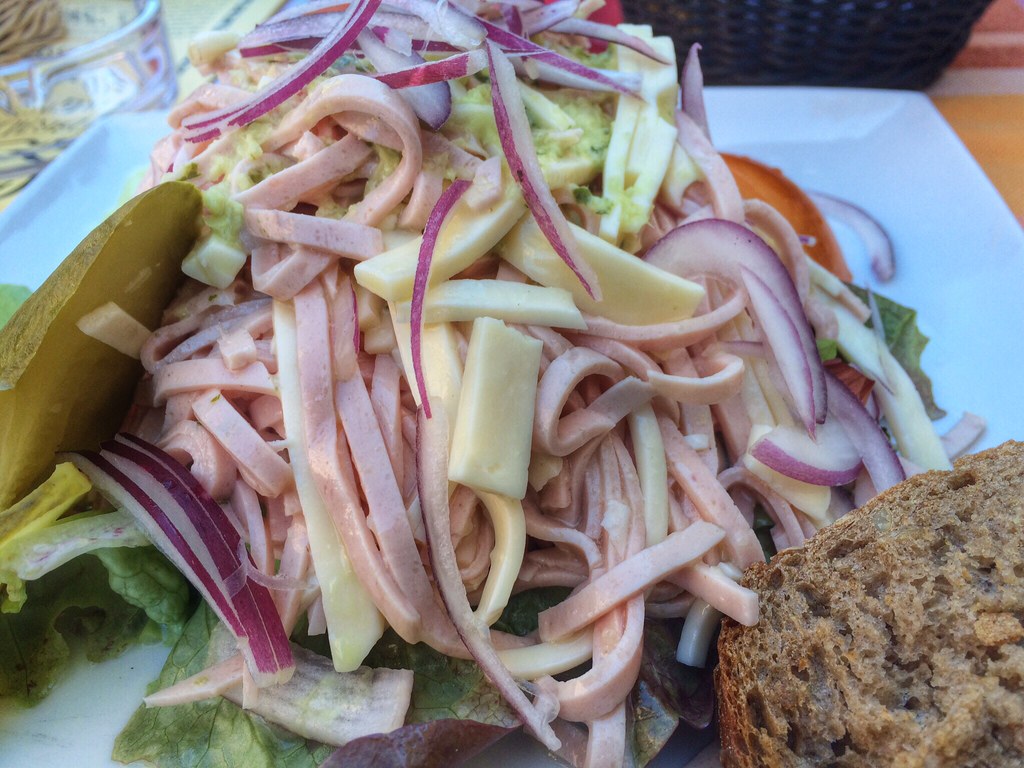 Not a big fan of vegetables, I could barely contain my excitement when I saw this unique item on the menu one sunny day in Freiburg. Wurstsalat literally translates to sausage salad, but can include any number of meats and cheeses. This isn’t a salad with meat on it, no, this is a salad almost entirely made up of delicious cold meats. A variety of cold cuts or sausages are sliced and then mixed with cheese, onions, vinegar, oil and pickles. The result is a tart and filling lunch comprised entirely of meat. An odd taste at first, especially since I don’t normally like pickles, I quickly got used to it and even found myself enjoying the meaty delight by the time lunch was over. My host told me it was a normal dish and indeed, looking around me I saw several other diners digging in to a big plate of sliced meats. It’s not something I’d have everyday, but was a great foodie find in a country full of them.

I have a fierce sweet tooth, so for me a big part of the foodie travel experience is discovering new sweet treats to enjoy. Luckily, Germany is one of those countries where that is a simple mission to achieve. I had a lot of great desserts, but one of the first I enjoyed was also one of the best. We have all heard of Black Forest Cake, but while in Freiburg I had the opportunity to watch a baker assemble one for me. Special tart cherry kirsch from the Black Forest is the only acceptable ingredient to add to the layers of chocolate, whipped cream and cherries that make an authentic cake and it’s not just a stereotype, the cakes are still popular locally. The baker told me that families wouldn’t think of having an Easter dinner without one, although it’s certainly popular throughout the year.

As far as pastries go, I found many new examples of delicious baked goodness, from rolls with sugar and raisins to small puffs made with chocolate and granulated sugar. German bakeries are amongst the best in the world and even the most common pastry found at a train station cafe far exceeds anything I can find here at home.

These were just some of the new German foods I discovered on my last trip – what are some of your favorite German foods?