I got up early one morning while visiting New Orleans, the siren call of beignets from Café du Monde were too much to resist. As it turns out, walking through this beautiful city in the first rays of sunlight was the perfect time to reconnect with a town I hadn’t visited in a very long time. My wanderings did more than just show off parts of the French Quarter I hadn’t seen before, it also introduced me to a part of town I’d never before visited – the colorful Faubourg Marigny.

It was all an accident. I don’t have a great sense of direction, but in New Orleans that’s more of an asset than a hindrance. The neighborhoods here are old, very old and are best experienced through hapless wanderings instead of well laid out plans. I took my time that morning, walking alongside street cleaners as they cleared Bourbon Street from the night before, taking time to pause in the gardens in front of St. Louis Cathedral and reading through the Times-Picayune as I indelicately gobbled up my order of beignets and sipped on the rich chicory coffee for which Café du Monde is so very well known. It was the perfect morning, a quiet one and an opportunity to experience the city as it’s best experienced, not through shots or tumblers but through a pace of life and style that is unique to this southern city. After my beignets disappeared, leaving only generous heaps of powdered sugar in their wake, I decidedly to amble in the other direction, past the old market and along streets that quickly turned from shops of pralines and Mardi Gras beads to corner delis and coffee shops. Before I knew it I had crossed an invisible line, leaving the French Quarter and entering another old neighborhood, no less interesting but much less well known than its neighbor – the Faubourg Marigny.

Unpronounceable to most, including myself, this quirky neighborhood today is a haunt of artists and hipsters, but it had a far different beginning. When New Orleanians call someone eccentric, that’s saying something, but that’s exactly how they describe a certain Bernard Xavier Philippe de Marigny de Mandeville, the man who turned his family’s plantation into the neighborhood known as the Marigny back in the early 1800s. Like the rest of the city though, it was a welcoming place where folks of all types and colors intermixed freely. That’s actually a feature of the city that I think has been lost to history. At a time when anyone different in any way was usually a social pariah, New Orleans welcomed them. Long before San Francisco was known as a safe place for the LGBT community, it was New Orleans where “confirmed bachelors” could live and even flourish. Race relations have also always been different here, and the Marigny is a great example of that. Originally it was a popular place for well-to-do white gentlemen to set up homes for their mistresses of color. Close enough to visit, but far enough away to keep openly secret.

Like so many other neighborhoods around the world though, Faubourg Marigny ebbed and flowed until the 20th century when it declined badly, home to criminals and drug addicts instead of the well to do. But also like so many other neighborhoods, it rebounded and now is not only up and coming, but one of the trendiest parts of town. Along Frenchmen Street you’ll find not only some of the best live music venues in town, but a quirky collections of shops and cafes that are completely different from anything else you’ve every seen. The neighborhood is also the most colorful in town. Thanks to continuous building over the decades, the mix of French and Spanish architecture is totally unique to New Orleans, and this is one of the best parts of town to see how the life and times of New Orleans evolved over the years. But the color doesn’t only come from the balconies draped with plants and blooming flowers, it comes from the artwork that is everywhere to be found. 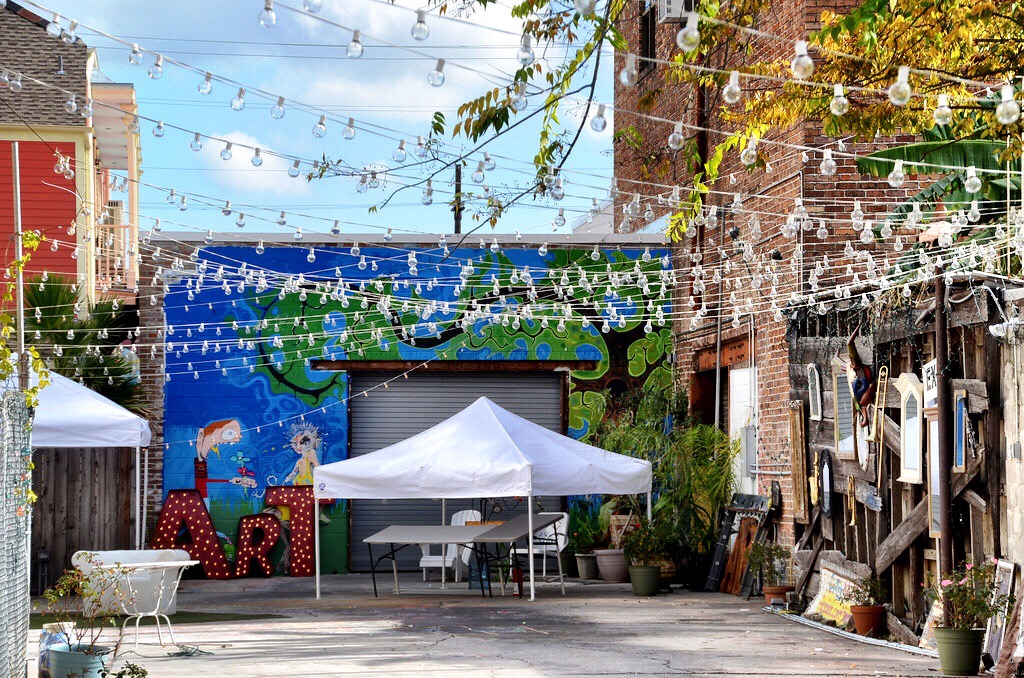 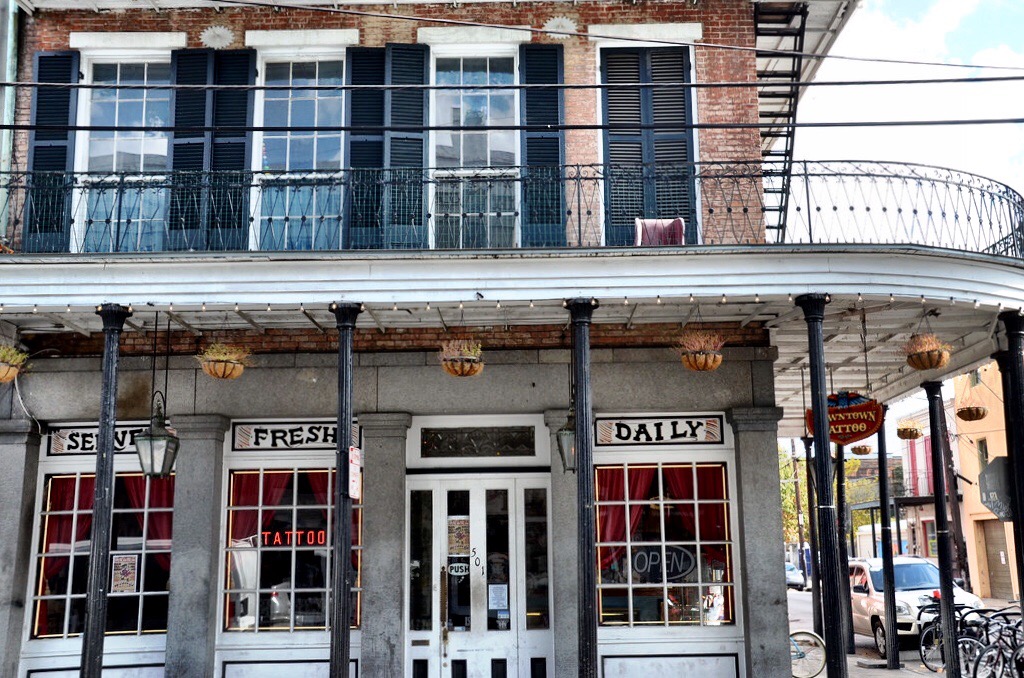 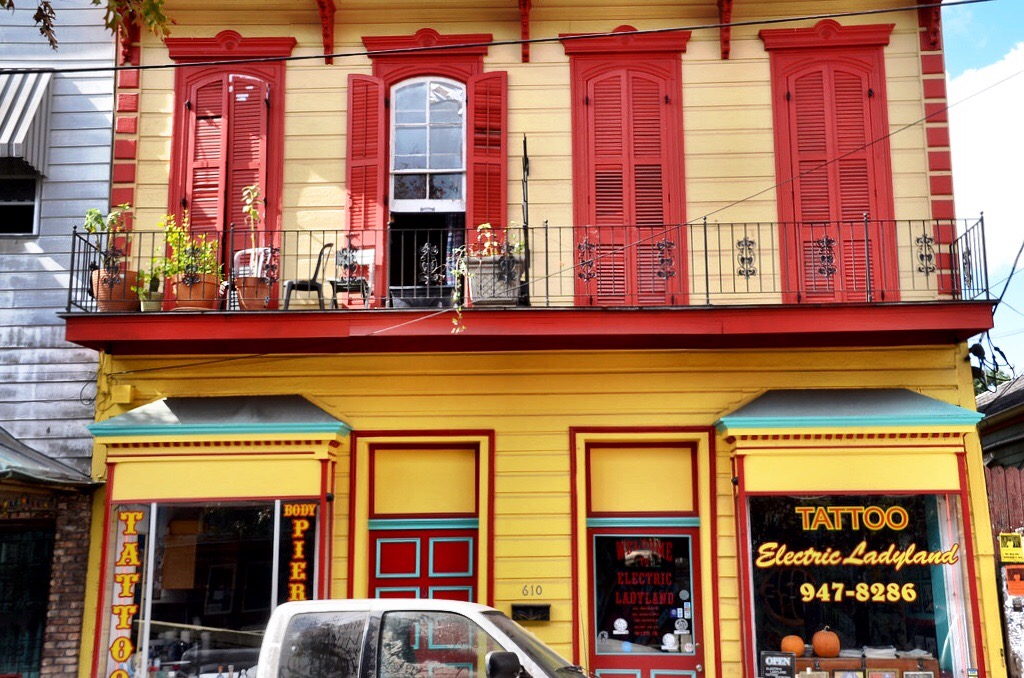 Walking around I couldn’t help but notice that every building and nearly every wall had some element of color and art incorporated into them. Not graffiti, these are truly public art installments, albeit unofficial ones. Taking inspiration from these artsy criminals, residents and shop owners joined in and embellished their own facades in every color of the rainbow, making a walk along Frenchmen Street a surprising jaunt full of life and color, one of the most vibrant and interesting walks you’ll take anywhere in the world.

I didn’t spend a lot of time in the Faubourg Marigny, but I didn’t have to in order to see just how special it is. Look past those trendy hispters that grace its streets and instead look at the ethereal spirit of the place. It’s something special and unique not just to this one neighborhood but to all of New Orleans and is just part of what makes this one of the most unusual and infinitely interesting cities in the U.S.