Food is I believe the most important aspect of the travel experience. Through food we form some of our strongest travel memories, scents and sensations that can recall specific moments in time instantly, even years later. It’s through the stomach that we learn about a new culture, what they value and how they live every day. It’s also something we all have to do, and because of that it is one of the few aspects of the travel experience to which we can all relate. I’ve had many amazing food experiences around the world, from a simple crepe in Paris to a traditional Braai in South Africa, but above everything I’ve consumed, these brief moments in foodie time are amongst my favorite. 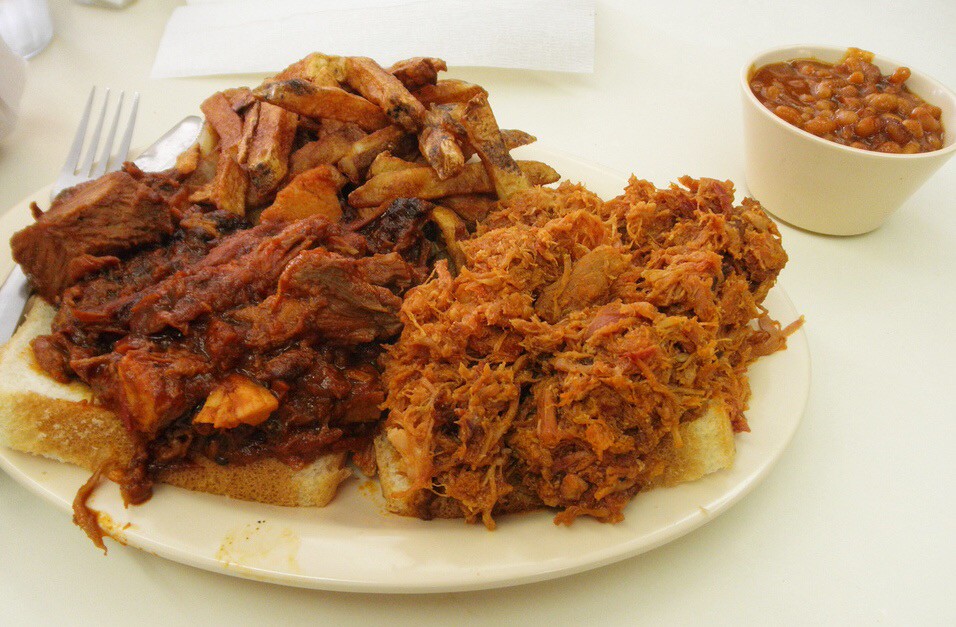 I’ve lived in 12 states from New Hampshire to Georgia, so it’s hard to lay claim to a region of the United States with a straight face. BUT, if forced to choose, I always say that I’m a son of the south, which is more or less true. Half of my family lives in the south, as I have done since 1991. So, I think it’s ok to also promote our regional cuisine as the best in the country, with great BBQ rising to the top of that delicious list. There is nothing quite so satisfying as a hearty meal of well cooked and well sauced BBQ. Truly an art form, the master cook spends years developing the recipes and hours slow cooking the meat. Served with a variety of sides including baked beans, hushpuppies and French fries, this massive meal may not be appropriate for daily consumption, but is a treat whenever you are lucky enough to enjoy it. All praise the American BBQ sandwich, and long may it cook.

While there are absolutely some delicious meals to be enjoyed in South America, on the whole I have actually been disappointed by the food there. At times it can be oddly bland and hard to find something local and tasty, depending where you are of course. As a lover of street food and restaurants without any stars, I surprised myself by enjoying a high-end food experience in Santiago, Chile. Not just enjoy it, but so far it’s my favorite food experience on the continent. Peumayen Restaurant means “place dreamed” in Mapudungun, the language of the indigenous Mapuche people of Chile. The name is appropriate as it fuses foods that have been eaten in Chile for centuries, but which most of us have never seen before. Taking recipes and traditions from the original people of the region, the chefs have created food that is interesting, different and delicious. My multi-course experience was delivered in fine-dining style, but with tastes and flavors that haven’t been combined in generations. From rolled beef with a Chilean hazelnut crust to lamb tongue with quinoa salad and onion puree, the chef absolutely adds his own personality to the old ways of eating, creating something totally unique. That’s not easy to say and makes the restaurant a must-stop in Santiago.

Overall I have always enjoyed the food in South Africa, from the fancy restaurants in Stellenbosch to the street food staple Bunny Chow in Durban. My favorite food experience though is one that went beyond the taste, and introduced me to a culture I would never have learned about otherwise. The Bo Kaap neighborhood in Cape Town is one of the most photographed in town, thanks to the vibrantly painted homes that stand in the shadow of the mountains. It’s a beautiful area, but most tourists come and go without learning very much about the Cape Malay culture. The earliest members of the ethnic group known today as Cape Malay arrived as slaves and were brought to Cape Town from Southeast Asia by the Dutch. Future generations including (now) Indonesian Muslim leaders who were sent into exile and forced to resettle in South Africa. Cape Malays also have a South Asian or Indian heritage, and it was their influence that brought Islam to South Africa. Over time their cultural, and culinary adaptations became ingrained into daily life in South Africa, especially the food and especially in Cape Town. Joining a cooking class in the home of a local resident, I learned how to roll roti and combine flavors for the perfect curry, learning more about the cook and the Cape Malay culture she exemplified in the process. Sure, I went home with a stack of recipes and a newfound taste for spicy Cape Malay food, but also with an intense appreciate for the Bo Kaap in particular and Cape Town as a whole.

This was a particularly difficult decision. Europe is probably my favorite foodie destination and I love so much of it, from fresh pastas in Italy to pintxos in Spain and pastries everywhere. But when I think about the one dish I have always enjoyed the most,  I have to say that the classic Weiner Schnitzel is my favorite meal in Europe. This is one of the most touristy meals out there, but it’s famous for a reason – it’s delicious. Sure you can find Wiener Schnitzel (which means schnitzel from Vienna) just about anywhere, but when you’re in Vienna one of the best places to enjoy this traditional delicacy is at Figlmüller’s. Located near St. Stephen’s, the chefs at Figlmüller’s have been creating some of the best versions of Austria’s national dish since 1905; so it’s safe to say they know what they’re doing. The schnitzels are made from the best cuts of pork and extend well past the edge of the plate – a massive 11 inches in diameter. Still, I found myself devouring this classic dish in no time; it was light, crispy and delicious. You can enjoy schnitzel anywhere, but be sure to try it at Figlmüller’s who really can be credited with transforming this popular dish into the culinary event it is today.

Asia is another location where it’s hard to pick one favorite bite, especially when several countries there are amongst my favorite places to eat anywhere in the world. But food is tied to memory, and because of that I have to choose this dish in Bangkok, not only because it’s delicious but because it means so very much to me on a base, emotional level. Located on the mighty Chao Phraya River, near Thewet Pier, is one of my favorite establishments in Bangkok, the In Love Restaurant. I’ve been each time I visited the Thai capital and thankfully not much has changed. One of the best features of the restaurant isn’t only the food, it’s the view, especially at sunset. Sitting there watching the sky explode in hues of purple and pink as boats race along the busy river captures for me what Bangkok is all about. Fortunately the food is good too. My go-to dish is a simple one, crispy chicken with basil. The combination of flavors isn’t just delicious but exemplify Bangkok for me, and that’s why it’s so special. 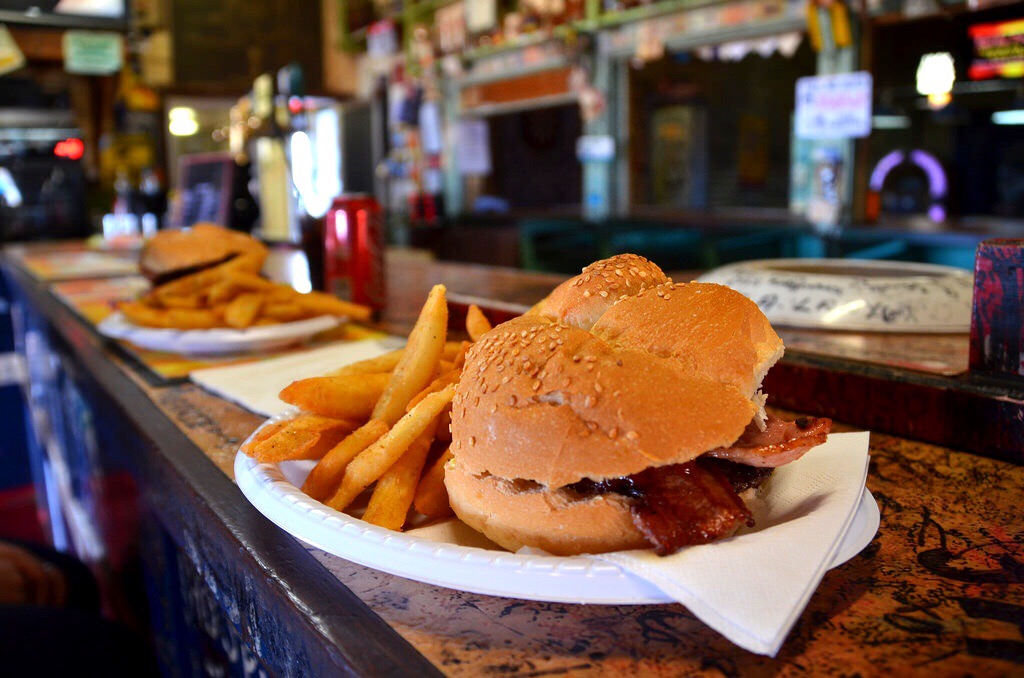 I love Australia dearly and know that I will never bore of exploring this massive and endlessly fascinating country. But for all it does right, Australia is not a prime foodie destination. Sorry, but it’s true. The food is fine, but there’s nothing really notable or classically Australian, aside from perhaps a sausage roll. But I did manage to find one of the best burgers I’ve ever enjoyed, in the middle of the barren Western Australian Outback of all places. The sole survivor of a long since evacuated gold rush town, the lonely Broad Arrow Tavern is located about 40 miles from Kalgoorlie and has been serving customers since 1896. The quintessential Aussie outback pub, the Broad Arrow isn’t famous just for existing, but for the thousands of notes left behind by customers covering every wall inside and out of the tavern. That’s where I had their famous burger, a heap of cheese and meat melting into each other creating what I consider to be an expertly prepared and naturally delicious burger. It was also a treat for this American to enjoy my own personal Crocodile Dundee moment.

Yes, I even have a favorite food moment on the icy continent of Antarctica, but it has nothing to do with what I ate and everything to do with the setting. Except at the military and scientific research bases, there aren’t food options per se, all of my meals were consumed on-board the ship I was one as it circled the Antarctic Peninsula. My favorite food memory though happened one morning when we hiked up a snowy mountain; I say mountain but it’s probably just a very large hill. Regardless, it wasn’t easy and at the top I sat on a rock, admiring the stunning views and the hundreds of penguins that waddled around me as I tried to catch my breath. I put my hand in my parka pocket and discovered a granola bar, perfect after the strenuous trek up the top of Orne Island. I munched away as I looked into the abyss, thousands of miles separating me from any form of civilization, a sensation almost impossible to experience anywhere else in the world. It was then and there that the enormity of the Antarctic experience really hit me, and I have that granola bar to thank in large part for that.

So there you have it, my personal list of my favorite foods on all seven continents. You probably don’t agree with some or all of them and that’s fine. Travel in general is an intensely personal experience, and food even more so. It doesn’t matter what you like or don’t like to eat when you travel, what matters is that you try new things and in the process learn more about new cultures than you would in any other way.

Where were some of your favorite meals around the world?

4 thoughts on “My Favorite Food Moments On Every Continent”