They were built to stand the test of time, to hail the pharaoh as a god and to impress everyone who saw them in person; and they still do. Abu Simbel, the massive temple and statues in southern Egypt are truly living mountains, monuments on a scale so large that it boggles the mind even today, three thousand years after they were originally built. A must stop on any trip to Egypt since their re-discovery in the 19th century, traveling to Abu Simbel is easy and convenient and for many, the highlight of a good tour through the country.

I was in Egypt with Insight Vacations, a luxury tour provider who after a few years has returned to Egypt, confident in the safety and security of the nation and eager to once again share the wonders of Egypt with its customers. I was on that inaugural trip back to the land of the pharaohs and just as had been promised, my own personal visit to the living mountains of Abu Simbel did indeed quickly become one of those moments that I know I will always remember.

Originally built in the 13th century BC by Pharaoh Ramses II, Abu Simbel was always meant to be a permanent testimony to his own power. That’s why the massive, 20-meter high statues of the god king and the temple itself were built into solid stone. Ramses didn’t want his temple destroyed by future kings and he also wanted to make permanent his position as a true god. That’s one reason why the temples to he and his queen Nefertari were placed so far away from the capital in the south, near present-day Sudan. He didn’t want them tampered with. And they weren’t, although sand eventually covered them, erasing their memory until European explorers re-discovered them in the 19th century. But they were safe and mostly intact, fulfilling Ramses’ goal to live on forever. They were very nearly lost permanently though when of all things water threatened their existence. 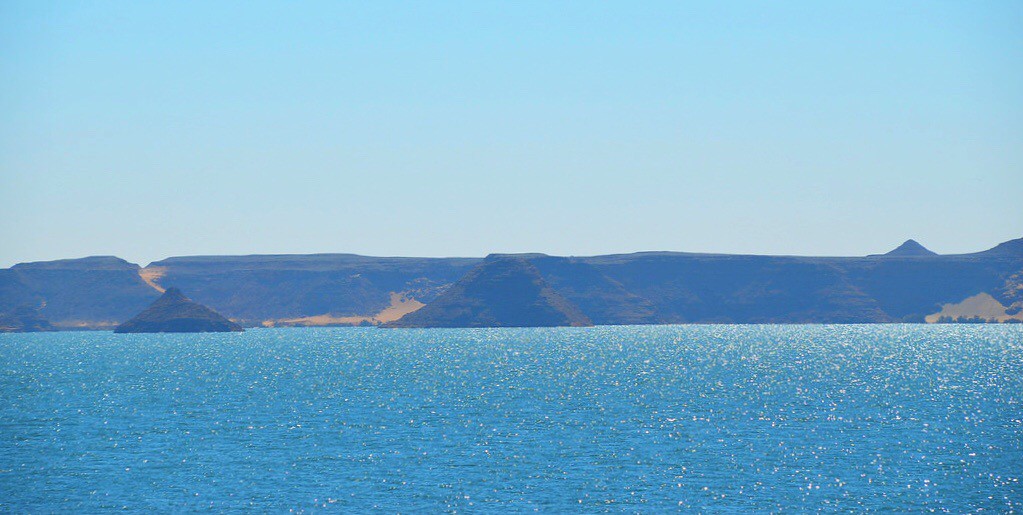 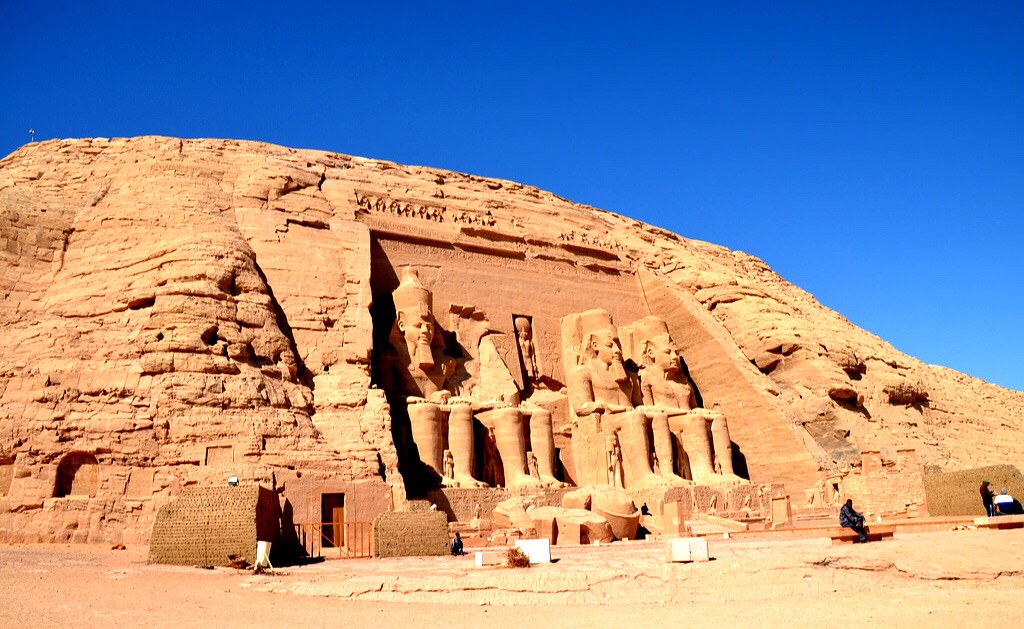 Long looking for a way to eliminate the scourge of flooding and droughts, the government of Egypt in the 1960s set out to build the massive Aswan High Dam. While the power provided and the guarantees against Nile floods helped the country, the resulting reservoir threatened to wipe out Abu Simbel and many other important temples of the ancient Egyptians. Helped by UNESCO and a massive team of nations, the mighty and seemingly immovable Abu Simbel was successfully cut out of the mountain and moved to where it sits today, on the banks of that mighty reservoir. Most tourists probably don’t even realize that what they’re seeing is the moved version, all-original of course except for the mountain, which was constructed for the incredible temple. That doesn’t change the experience though, and to stand in front of the colossi of Ramses in person is a moment unlike any other.

While you can drive there, the faster and much easier way of reaching Abu Simbel is a very quick and easy flight from Aswan, where most tourists either start or end their Nile cruise. Flying over the desert and vast reservoir, if you pay close attention you can actually see the temple from the air, offering a prelude to the exciting experience itself. That first moment when you first spy the incredible statues of the pharaoh king is one you will always remember. This is the stuff of legends, what you see only in books or movies and fulfills the promise of what a trip to Egypt should be like. With our trained Egyptologist guide, we walked around the temple learning more about it, but not listening as closely as we should have been. That’s how impressive the statues and temples are; nothing else in that moment really matters. 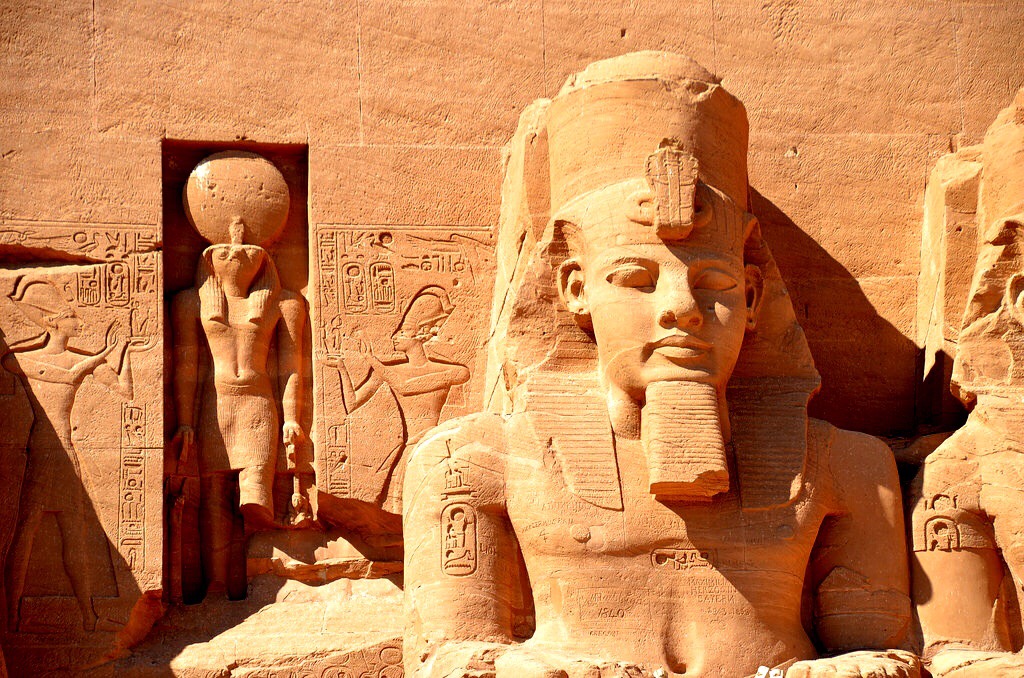 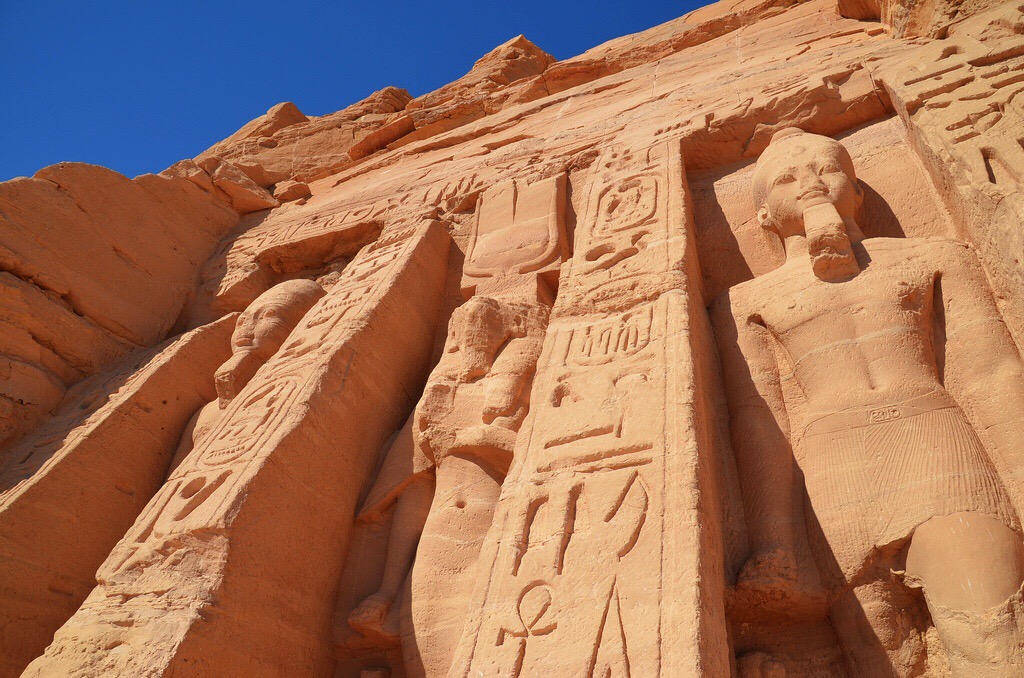 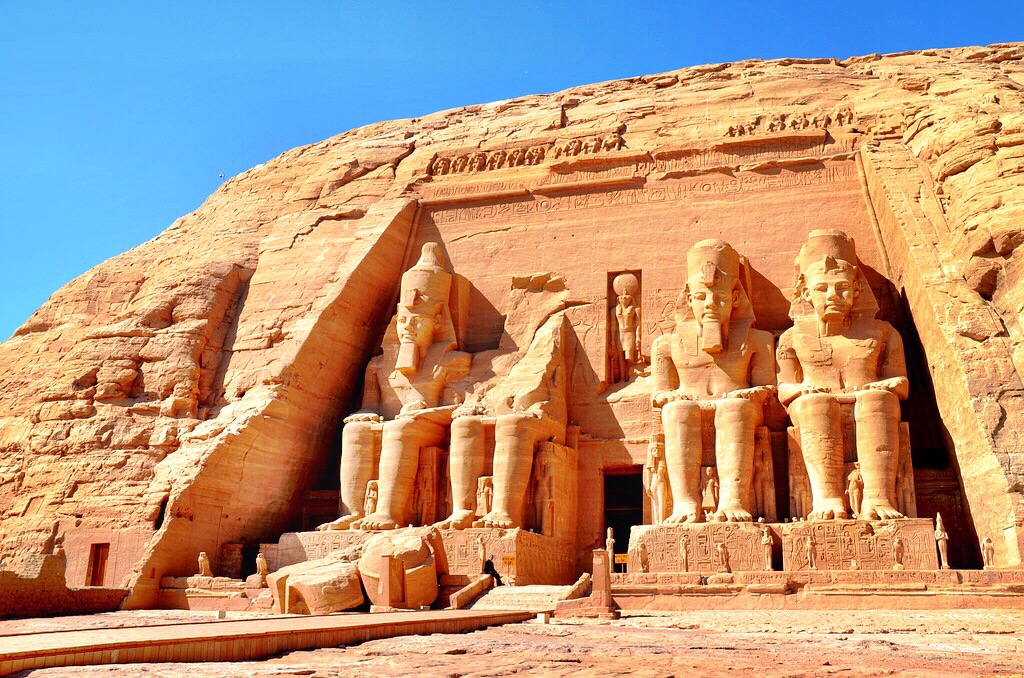 Photos sadly aren’t allowed inside the temples themselves, but that’s fine. I relished the opportunity to put away my camera and live in the moment, if only for a few minutes. Even though the temple is 3,000 years old, was badly neglected and then painstakingly moved, the artwork and details inside are shockingly vivid. That was a recurring experience during my trip in Egypt, I was taken back by how well preserved everything is, hardly showing their millennia of age. Inside the temple are stories told through images, of battles and the glory of Ramses himself. The entire complex is meant to venerate him, to affirm his position as something other than man, and it succeeds. Even in 2015, it succeeds.

What I love most about visiting ancient sites is the ability they offer to connect with a civilization long gone. To learn about the people, what they thought and did – this excites me. Standing there in the middle of the dimly lit temple, only a few people around and all in utter silence I imagined myself one of those old temple priests, the people who devoted themselves to the god-king. I could smell the incense, hear the chanting and then and there I connected with them; began to understand them and it was thrilling. Those moments of discovery give us purpose, they make traveling halfway around the world worth it and they are what drive me more than anything.

When you’re in Egypt go to Abu Simbel, but not because you feel like you have to, that it’s the right thing for tourists to do. Go to learn, go to experience, go to feel what the ancient Egyptians left for us. Beyond the trinkets and novelties, visiting Egypt is a journey of discovery, it’s to learn more about that long-gone civilization, yes, but it’s also to selfishly learn more about ourselves in the process.

Have you been to Abu Simbel? What was your experience like?