Chaos. That was the first word that came to mind as the car dodged trucks and vans on the way from the airport to the hotel. Cairo doesn’t have traffic laws per se, there are no stop lights or dividing lines. Instead pace of traffic is up to the creativity and skills of the driver, along with expertly timed honks of the horn. The horn takes on a new importance in Egypt, different tones and lengths each communicating different messages. That was my first introduction to mighty Cairo, Egypt, just as it is for many. What I didn’t realize at the time though was how emblematic that drive was of the city, which exists in a perfect state of well-managed chaos. There’s beauty in that chaos though, like seeing an image in an array of dots. That beauty is available for everyone to see and experience, but you have to know where to look.

I was in Egypt on a remarkable tour of the country with the luxury tour provider, Insight Vacations. The trip started and ended in the Egyptian capital, giving me some time to see it both with guides and on my own, and ultimately learning a lot about this impressive if not slightly daunting city. 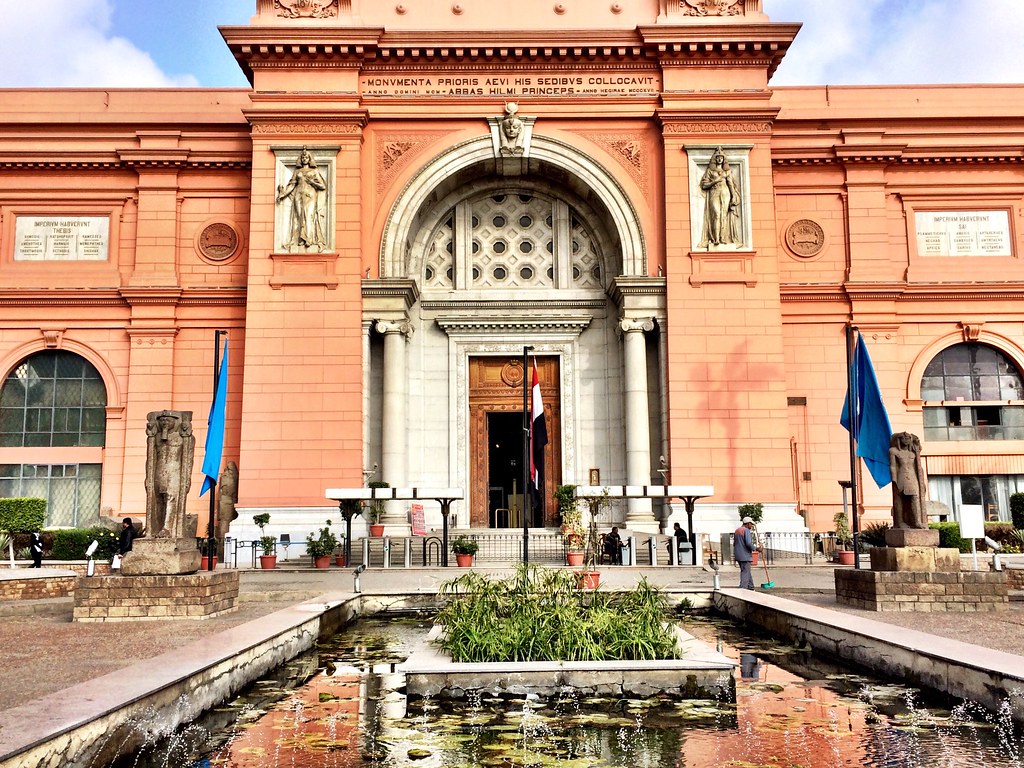 Most cities have sites and attractions that everyone just has to see and for Cairo that’s the world famous Egyptian Museum. Located in Tahrir Square, this massive museum has more than 120,000 items, chronicling the history of Egypt throughout antiquity. It’s a strange place though, built at the turn of the 20th century, it doesn’t look like much has changed since 1902. The layout and identification of objects is odd and random and reminiscent of how museums used to present items and information. A lot is sadly lost in the education process, but aside from all that being able to see some of the most amazing treasures of Ancient Egypt is indeed amazing. I spent the week before my visit to the museum seeing ancient Egyptian sites around the country but the details were missing, the context wasn’t there. The museum fills in those gaps and witnessing the vibrantly painted statues on display, it was easy to imagine them sitting inside one of those ancient temples or tombs. Supposedly a new, more modern museum is being built and will hopefully at some point open, but it’ll probably be a few years. In the meantime though, go and gaze upon King Tut and his pharaonic cousins, all of whom capture the spirit of the long gone civilization. 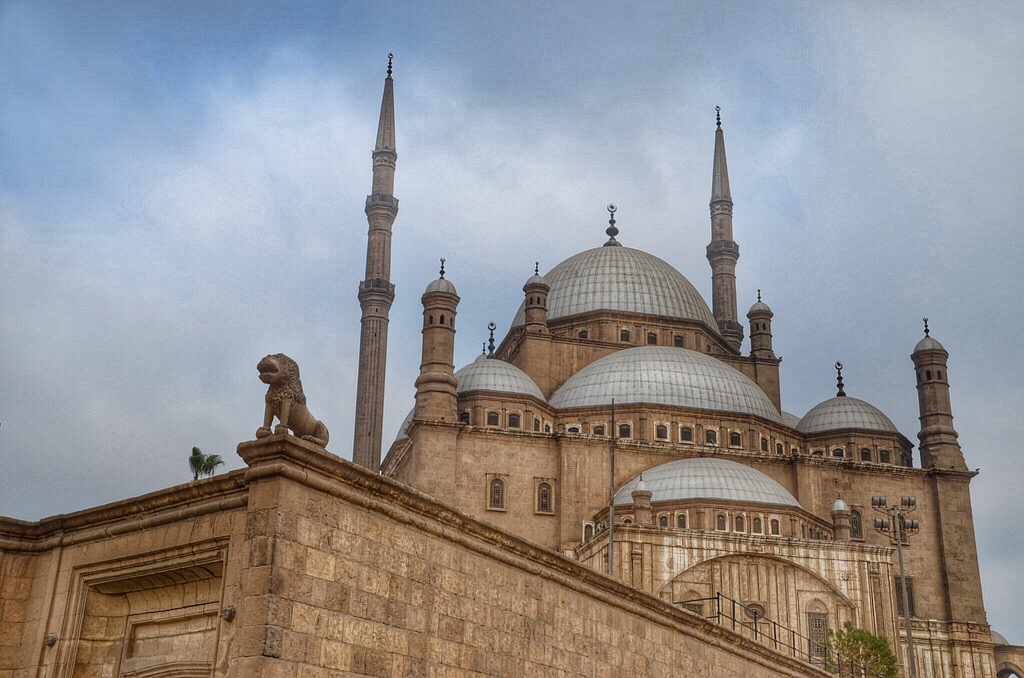 After visiting so many sites where 2,000 years old was considered new, it was refreshing to see some of Egypt’s more modern history. Cairo has been one of the leading centers of Islamic thought and scholarship for centuries, and visiting the most visible and one of the most venerated mosques in town is an important stop for all visitors. Sitting high atop the Citadel, Muhammad Ali Pasha commissioned the massive religious complex in the early 19th century. Largely regarded as one of the founders of modern Egypt, Muhammad Ali is also one of the most respected figures in Egyptian history, making this mosque all the more important. Non-Muslims are welcome to visit, as long as services aren’t underway, to tour the grounds and even go inside the mosque itself. It’s always interesting to see the intricate details of an old mosque, the style and colors vibrant and welcoming. 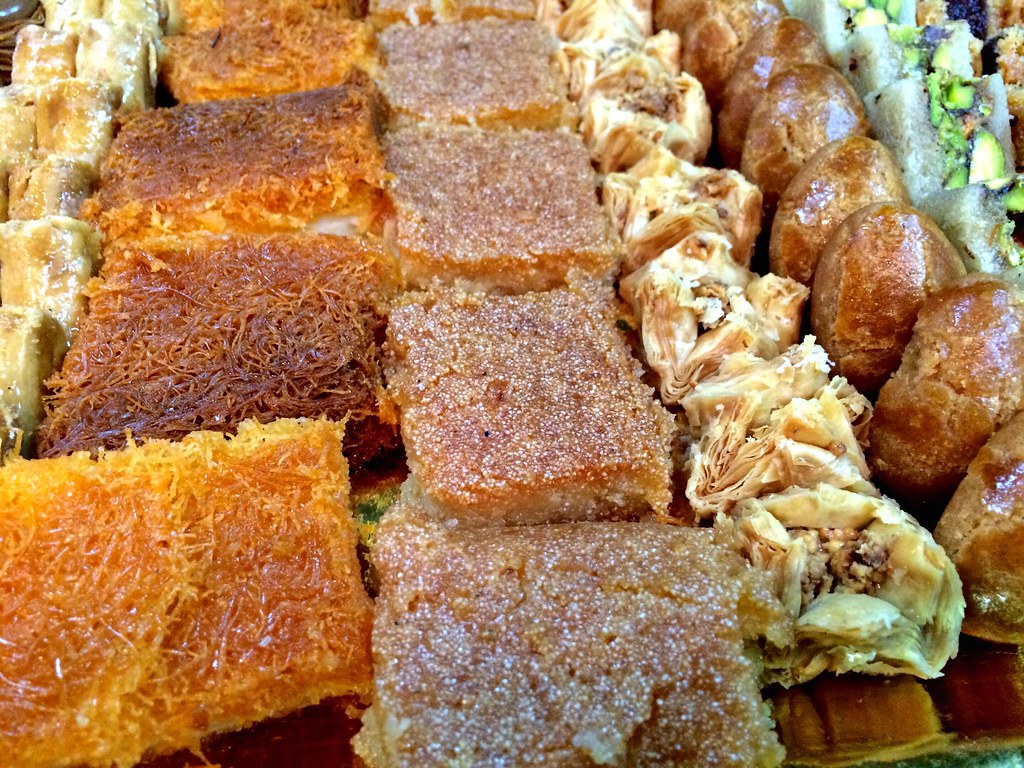 Just like any great city, wandering around the neighborhoods isn’t only the best way to learn about a new city, but it’s a lot of fun too. Venturing out from my hotel one afternoon, I soon found myself in an upscale, tree-lined neighborhood. It reminded me a lot of Italy actually and for a few brief moments the constant din of car horns was nowhere to be heard. Townhomes with beautiful art deco details, and even community churches and cafes lined the streets. Walking by one café I couldn’t help but notice two things: 1) It was packed and 2) the array of sweets in the shop window looked too good to ignore. Simonds Bakery & Café has been serving great coffees and traditional pastries since 1898, and I immediately could see why. Sure they have modern cakes, but the real draw is the Egyptian pastries, small bits so sweet and delicious that they will satisfy just about any palate. I ended up going back three times, met and chatted with the manager and even took some of the baked goods home. You won’t find places like Simonds in any guidebook, but when you find them on your own they will quickly become treasured travel experiences.

Cairo is an ancient city, and while most of those past generations have naturally been built over throughout the centuries, you can still get a glimpse of them in Old Cairo. Labyrinthine streets and souks make way to some of the oldest mosques, churches and even synagogues on the African continent. My favorite part of visiting this colorful part of town was a stop at the famous Hanging Church. It’s called that because it sits above a Roman fortress and literally hangs over a passageway. Probably dating back to the 3rd century, the church is a glimpse into early Christian life that is hard to find anywhere in the world today. I arrived right after Mass, and the fragrant smell of incense still filled the air in a thick haze. I’ve been to a lot of churches, but seeing parishioners in them is particularly special, to see the church operate in the way in which it was intended. While the church is beautiful, it’s the nearby underground passages that are the real thrill. An ancient area where Coptic Christians have lived for centuries and where once the Holy Family hid from Romans, it’s a beautiful labyrinth of corridors and alleyways, a small city set apart from the normally chaotic streets of Cairo.

My trip started out in chaos and it ended that way, when I decided to visit the impossibly large and always crazed Khan el-Khalili souk. One of the largest marketplaces in Cairo, I visited on a Friday afternoon, which only accentuated the chaos as Cairo residents were out and about enjoying the first day of their weekend. Walking along the streets of the souks, hundreds of vendors and shops were lined up on both sides, eager to sell me something, anything. Sure, it’s a major tourist site but it’s also an important place for locals who go out to either just revel in the atmosphere or actually get some shopping done. Looking around, I was in fact one of just a few tourists in the mass of people swarming the souk, making me feel like I was offered a glimpse into another side of life. I bought some warm, fresh baked bread as a snack and just meandered. I didn’t buy anything, much to chagrin of the vendors, but I did have a wonderful afternoon just absorbing this aspect of the city. It really was the perfect way to end my stay in Cairo, a certain metaphysical balance to finding beauty and order in what at first seems like a chaotic mess. But that’s why so many love this enigmatic city, for its unique ability to charm and bewilder simultaneously.

Have you been to Cairo? What made your trip special?

5 thoughts on “My Cairo: Seeing The Best Of The City In A Few Days”