When I was 7-years old I had the complete Peanuts Encyclopedia set featuring everything from space travel to different cultures around the world. I loved those books and they were an early way for me to escape through the pages of a book and to see the world without leaving my Smurf poster covered bedroom. That was also when I first started pining after the pyramids in Egypt and one day being an archeologist, not unlike a recent movie hero named Indiana Jones. While I’ve been fortunate to travel the world, one of my early travel influences remained unvisited, a shocking oversight on my part, until a few weeks ago when I joined an Insight Vacations trip to Egypt and finally – FINALLY – was able to witness the beauty and majesty of the ancient pyramids in person. I was surprised by the actual experience though, and I think anyone who visits probably feels the same way. 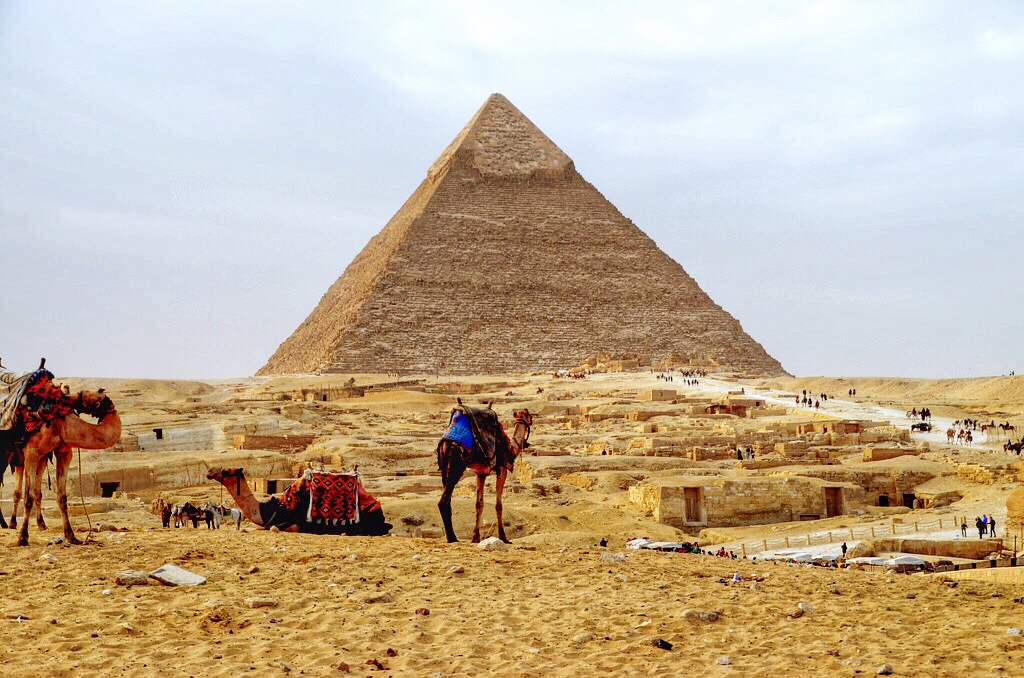 The Pyramids of Giza have been attracting tourists since before there were tourists. From Alexander the Great to Napoleon, countless numbers of people have been drawn to the size and mystery of the pyramids. The only one of the 7 Ancient Wonders of the World still standing nearly complete, they have an aura about them even for people who have never seen them in person. The Giza Plateau is home to three principal pyramids as well as the Sphinx and for many people are the very reason why they travel to Egypt in the first place.

Tourism is still down in Egypt and I was shocked but secretly happy to see so few tourists at the pyramids the day I was there. Five years ago the area would’ve been swarmed with hundreds and probably thousands of visitors, clambering over each other to get the perfect shot of the most famous landmarks in the world. I didn’t actually count, but there were barely a hundred folks in the area with hawkers almost outnumbering us. The first thing I overheard though from my fellow tourists wasn’t awe or wonder, but a little disappointment.

For whatever reason, many people think of the pyramids as sitting in the middle of a vast desert, nearly forgotten by time and frequented only by Bedouins and camels. It’s a romantic notion to be sure, but it’s also an incorrect one. Think about it for a second and consider the massive size of the great pyramids. Originally standing at 480 feet, the Great Pyramid of Cheops was the tallest man-made structure in the world for over 3,800 years and weighs a staggering 6 million tons. Such a structure needs bedrock; it needs a plateau like the one in Giza. Sand simply could never have supported it, so the concept of a desert wonder is way overblown. And yes, it is very close to Cairo, which thanks to the strategic position on the Nile has been inhabited since around 3,000 BC. Hardly a surprise there. What did surprise me was how disappointed some folks seemed, allowing the setting to detract from what really is in all honesty one of the most impressive sights in the world.

Walking around the Pyramids of Khufu and Khafre is one of those experiences that takes a while to digest and appreciate. I knew at the time that the full magnitude wasn’t registering, I was seeing without comprehending, saving everything in mental storage banks for future appreciation. There are few other places like that in the world, places so incredible that they take time to appreciate, but the Pyramids certainly top the list. 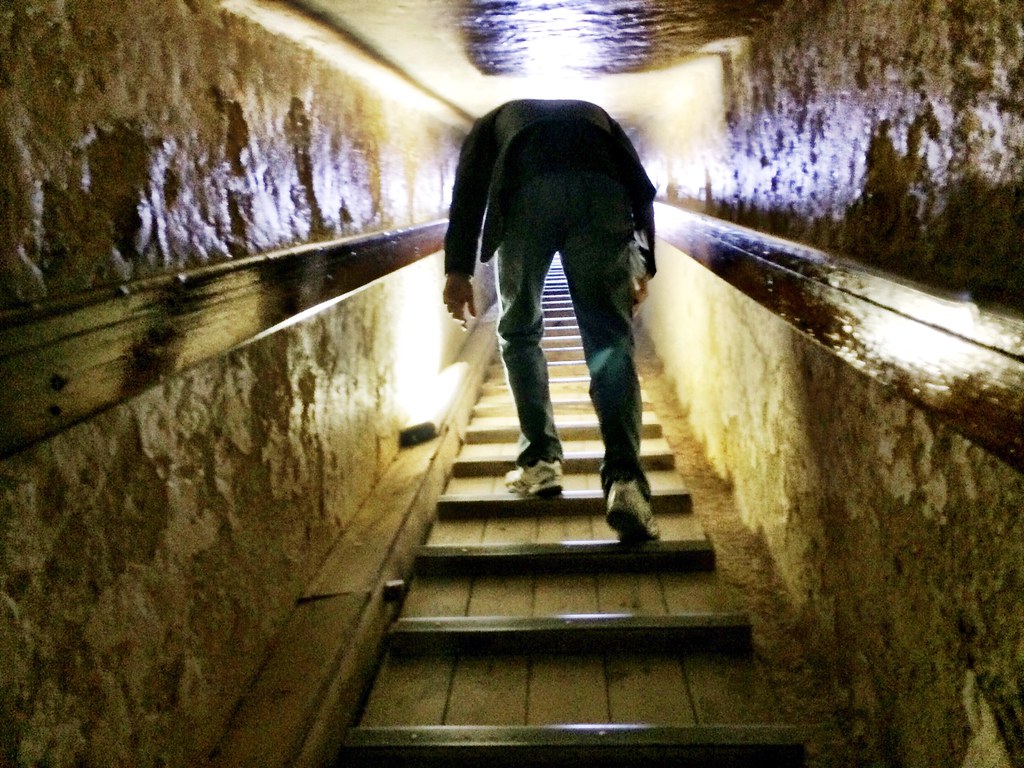 My own personal, “Holy crap I’m at the pyramids!” moment happened as I entered the passageway into the Pyramid of Khafre. That’s right, with the admission ticket comes complimentary access to the interior of the massive pyramid itself, a rare treat I didn’t even know was possible. Crouched down, gingerly navigating the steep ramp taking me down into the bowels of the ancient tomb I couldn’t help but again appreciate what early archeologists must have felt when they first entered these tombs. The anticipation, the fear, the excitement and the uncertainty, I felt all of those things and I knew exactly what was waiting for me inside – nothing at all. No, these tombs were looted millennia ago, the preserved body of the pharaoh and his treasures stolen before even the emergence of true Western civilization. After descending one shaft and climbing up another I was there, in the middle of the pyramid with millions of tons of stone blocks hanging over me. Inside the pyramid. Those words hung with me for a moment and a smile slowly crept onto my face. I’d done it. I’d fulfilled the dream that Snoopy had inadvertently planted thirty years earlier and the best thing is, I realized it.

Knowing you’re having a special moment WHILE you’re actually enjoying it is rare but it happened then and there. Sure, the enormity of the pyramid experience would take a few more days to hit me, but the appreciation was there almost immediately. Walking around the Pyramids of both Cheops and Khafre and seeing the smaller Pyramid of Menkaure in the distance was worth the trip alone. Worth dodging the innumerable hawkers begging me to buy cheap postcards and trinkets, or to take photos of their camels. It was worth everything to walk in the footsteps of millions before me both in ancient and modern times who like me had an insatiable NEED to stand in the place of pharaohs, and to touch rock that was first hewn thousands and thousands of years ago. 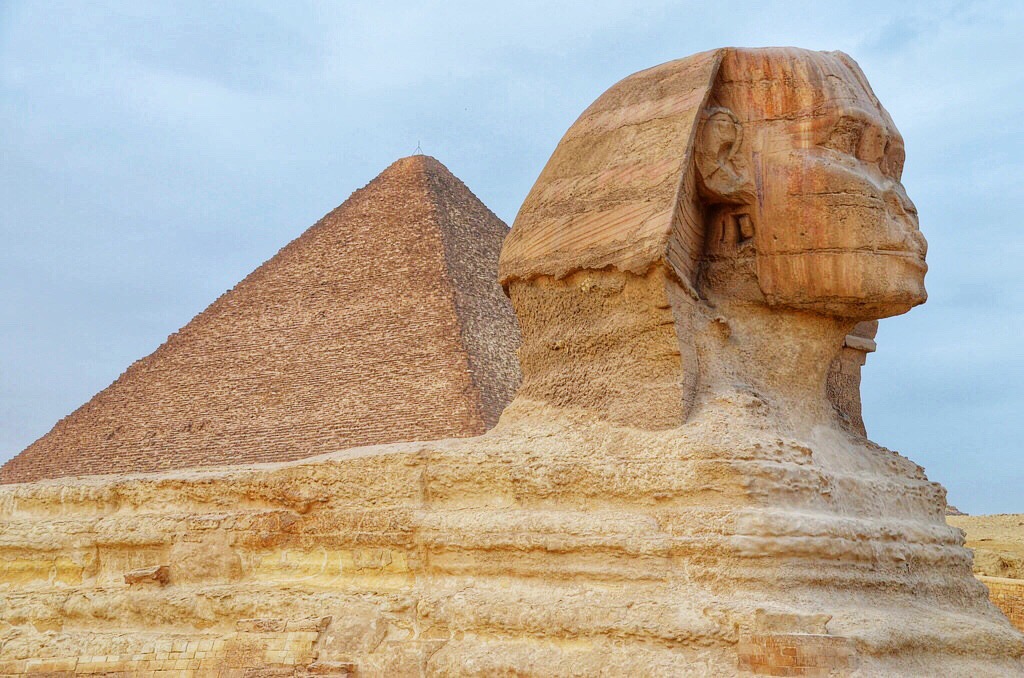 Yes, some people poo poo the fact that Cairo is so close to the pyramids and that immediately across the street from the enigmatic Sphinx is a KFC and Pizza Hut. (They actually offer the best vantage point to see the Sphinx head-on, which you can’t do when visiting the site.) I don’t know why though. None of these things detract from the experience, they’re part of it. No place in the world is static; everything is in a state of change and flux, both good and bad. Sure, when you open up a travel calendar you are unlikely to see a photo of Pizza Hut in it, but that’s part of the travel experience. It may be the desert image of the pyramids that fuels our wanderlust, but that doesn’t mean we should ignore or lament the realities once we actually visit them.

So when you visit the Pyramids of Egypt either on a great tour organized by Insight Vacations or on your own, know what to expect. Know that there is most definitely touristy kitsch for as far as the eye can see, but there is something else there too. There is one of the most impressive feats ever undertaken by man, an effort so incredible that it took nearly 4 millennia to match. It is the symbol of an ancient civilization important to us still today, whose lives and struggles weren’t all that unlike ours and a people that we strive to connect with, whether it be by standing inside the Great Pyramid, or snacking on a personal pan pizza with the Sphinx in the distance. But most importantly, don’t be an arrogant traveler. Appreciate the moment for what it is, one of the most incredible and humbling that you will probably ever experience.

7 thoughts on “Exploring The Pyramids Of Egypt Inside And Out”