She asked me three times and yet never seemed satisfied with my responses. Scottish, she was confused as to why 95% of the passengers on board the Viking River Cruise ship were all American. “Is it cheaper for you or something?” She prompted. No, it has nothing to do with cost or cheap airfare; instead it has everything to do with a reintroduction (or better said an introduction) of this style of travel to the American audience. Whether it’s those wonderfully infectious commercials during the PBS broadcast of Downton Abbey or just simple word of mouth, more Americans than ever are flocking over to Europe to see the Old World on river cruises. More people have asked me about my own recent river cruising experience than any other trip I’ve taken lately, so I thought I’d put together a little guide to help determine if this popular trip choice is for you. I’ve already written my review of Viking River Cruises, so that’s not what this is – not exactly. Instead it’s more of a primer to river cruises and a few points to keep in mind as you ponder your next vacation.

NOTE: I have ONLY gone on river cruises with Viking River, so I can’t speak to any other line and the experiences with those companies. I’m sure there are some differences, so please keep that in mind. And I don’t have anything against any of the other cruise lines, in fact I imagine I’ll cruise with a few of them at some point in the future.

The most popular question people asked me had to do with the age of the average river cruiser. The old perception is that people who go on river cruises are grandparents, octogenarians and other elderly types. While I’m sure this varies from line to line and season to season, I can tell you that I wasn’t the youngest person onboard the ship. Sure, there were a lot of folks that I would put into the 45-65 age group, but there were plenty more around my age, which is smack dab in Gen X. Maybe it’s because it was close to Christmas, but we had two extended families on board and even a couple who got married while sailing with Viking. It’s important to note though that age is just a number. Instead, I think we need to look at travel styles. The people I met onboard were active and curious travelers, no matter how old they were. No one was content just sitting in a chair all day and watching the world float by, and luckily they didn’t have to. So regardless of our age, I’d say that almost all of the 189 passengers onboard my ship were very similar to me in travel style.

The other myth is that this style of trip isn’t active. I’ll address this more fully in the next bullet point, but that’s simply not true. While I was grateful to have some time to relax, most of the time the schedule was a busy one, but not overly so. If you want an active vacation, river cruises afford it but at the same time, they also allow for a slower pace if that’s what you’re after. Not to be too wishy washy, but river cruising gives passengers the opportunity to choose their own adventure, so to speak, and merge their own personal travel style with that of the voyage.

Within a couple of days we made a few close friends onboard the Viking River Cruises ship; it’s just natural on a trip like that I think. They were around our age, well traveled and if asked would call themselves highly independent travelers. They confided in us that before the trip they were a little nervous. They didn’t want to be treated like cattle and instead wanted to experience Europe like they normally do, by themselves. But they also wanted some of the luxuries that river cruises afford, which is why they were there. By the end of the trip they were converts and told me that the trip was one of their favorites. Funny, I felt the same way too, as did many other first time river cruisers I chatted with during the cruise itself. Even though all of these people booked the trip, they were still fearful that it wouldn’t be independent enough, but we all were very wrong about that.

Not unlike ocean cruising, almost every day we stopped in a new city along the beautiful Danube River. The schedules were fairly similar, the day started off with an optional and complimentary walking tour of the city provided by Viking followed by independent time. Once again, everything is optional. If you want to wander on your own all day that’s fine, if you don’t that’s fine too. I took the daily walking tour for a couple of reasons. One, I love walking tours and think that with the right guide is a great way to learn about a new city quickly. Two, it was a great orientation to the layout of the city so that I could use my free time more effectively. Most of our stops were in smaller to medium sized towns, and a day was more than enough time. In cities like Budapest and Vienna, the ship actually was docked for a longer period of time, acknowledging the fact that a few hours isn’t enough time for such massive cities. But no matter what, we toured each city just as we would had we driven there or taken the train. I never once felt shorted on time and not once was my own unique travel style hampered. If anything, the cruise allowed me to see places I would not have traveled to on my own, and for that I am grateful. 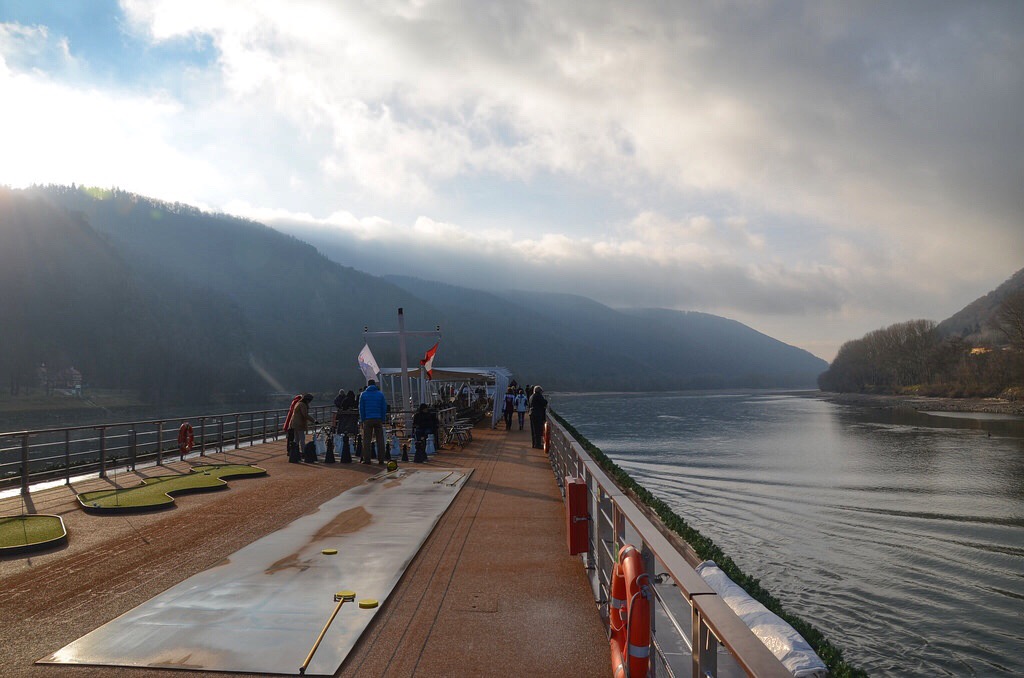 Adds a social aspect that was fun but not overwhelming

One part of the trip I hadn’t considered beforehand was the social aspect. While there are plenty of stops and diversions, the fact is that you’re sailing on a ship with 189 other people and there are plenty of occasions to chat with most of them. Viking doesn’t have reserved seating for meals, so it was always interesting to sit with new folks and learn more about them. I’m old school and I’m always worried how people, particularly older people, will treat us for being gay. You know what though? Not once in similar situations around the world have we been treated poorly and we definitely weren’t on board the ship either. We met a lot of great people, learned about their varied and interesting lives and even made some new friends. By the end cliques had formed, but not in a bad sense of the term. Instead folks tended to group with other people with whom they related. The social aspect was something I came to really enjoy, and it was fun to experience parts of Europe with other people and to hear their impressions of cities visited. Like I said, I hadn’t thought about this social aspect beforehand, but it added a different and fun element to the trip and as it turns out, it was an important part of the experience. 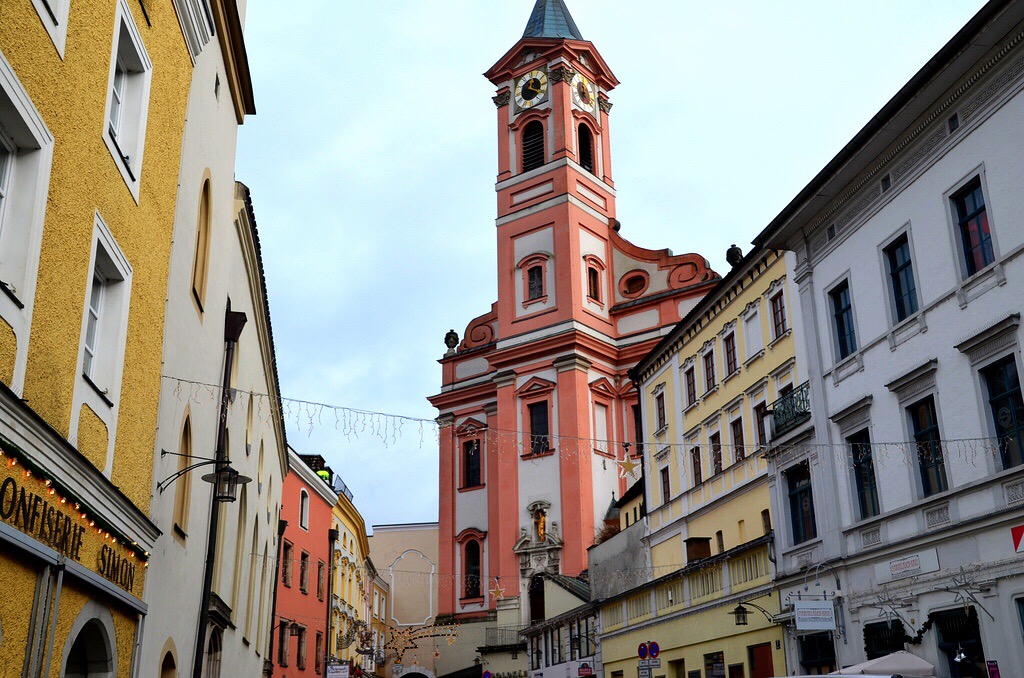 Convenience and would I do it again?

In years past, my partner and I have traveled to Europe during the holidays, established one city as a home base and from there we took day trips to nearby towns and cities. We always had a good time, but I would never call those trips relaxing. It usually meant catching an early morning train, being on the go for at least 10-12 hours before getting back to our rented apartment in the evening. After a few days it takes a toll and while we loved seeing new places, it would have been nice to be able to relax for a few hours, take a nap or just read a book. That was the difference between those trips and our river cruise, we had the opportunity to relax when we wanted to because our hotel was always with us. One quick example, when we toured around Passau it started to rain in the early afternoon. Now, had we been there on a day trip from somewhere else we would have just suffered through it, slogging our way around the city and becoming increasingly miserable. But because our ship was an easy walk from the downtown, we just sauntered back and encamped in the lounge, hot cocoa in one hand and a good book in the other. We had seen all we really wanted to see of the city and didn’t feel like getting soaked and it was fantastic to have the luxury to just go back to our room and relax. That convenience is what I enjoyed perhaps the most, our hotel floated along the river with us and enabled us to have a much more relaxing, but also active, vacation in Europe than we’ve ever enjoyed before.

By now it’s probably obvious to you that yes, I would indeed take another river cruise. As a highly independent traveler I never once felt like my travel style was infringed upon and if anything, the resources made available enabled me to be a better independent traveler. I think that if you’re looking for a different way to see certain parts of the world, and especially Europe, and if you like being around other people then a river cruise is a great option for you. I’m not saying it should be the only way you vacation, but I definitely think it should be in the rotation for your future travel adventures.

Is there any aspect to river cruising about which you’re curious? Let me know any questions you have.

16 thoughts on “Are River Cruises For You? A Few Of The Benefits”