I love exploring Australia thanks to its size, incredible diversity and just overall uniqueness. There’s nothing quite like it anywhere in the world and it makes each and every visit something truly extraordinary. On my last trip to the Land Down Under, we took a few days to visit a place that had long been on my own personal travel bucket list – Kangaroo Island Australia. The very name of it sounds exotic and cute at the same time, which, after having been there, I can verify is indeed the case. Easily reached from Adelaide in South Australia, locals have known about this very special place for years but it’s finally making a name for itself amongst foreigners like myself. So what makes it so exceptional? Well, many reasons to be honest, but these I think best sum up why everyone should add this remarkable island to their vacation plans immediately.

For an animal lover and amateur conservationist like myself, Kangaroo Island was a trip to fantasyland. Known as a natural zoo without fences, Kangaroo Island is one of the best places to see Australian wildlife in a fairly small area. I only had two days there so I enlisted the help of the luxury travel experts on Kangaroo Island, Exceptional Kangaroo Island, the most comfortable way to explore the fabled reserve. Our guide was none other than the owner of the company, Craig, and luckily for us he knew all the secret spots to take us to get those experiences we were after. From walking with kangaroos in a private meadow to which only Craig had the keys to looking for koalas in trees, the experience on Kangaroo Island was just as I had hoped. Spending a couple of days with Craig, meandering around and trying to see as much as possible was some of the most fun I’d had in ages. It’s not just koalas and kangaroos though, plenty of other animals call the island home and you’ll get to see most of them including: wallabies, penguins, echidnas, seals, sea lions and more.

Australia seems to be over-endowed with beautiful natural escapes, and Kangaroo Island is one of the best. Home to only around 4,000 people, there’s not a lot of development thanks also to the fact that so much of it is now protected wildlands. While the wildlife may be the initial draw for many people, the scenery soon earns a spot in every visitor’s heart. From the Remarkable Rocks and the associated outlook, to random cliffs and beaches you’ll see along the way, the island is truly spectacular. It was on one of these cliffs where Craig set up a beautiful white linen lunch service for us offering one of the best views in the world. Inland, rolling farms and forests take over adding a pastoral calm counterbalance to the rocky and fierce coasts. It’s also just the right size so that you can easily get the best of both landscapes easily within the same day of sightseeing. 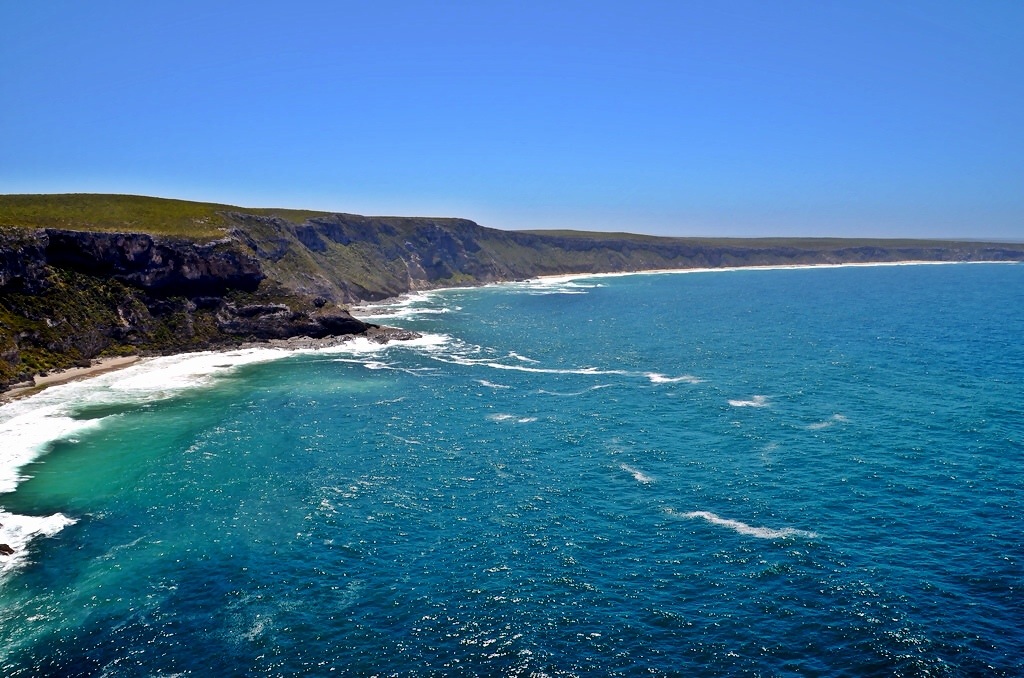 As a luxury traveler I was thrilled that I discovered Craig and his company and used them as our way of seeing Kangaroo Island. When you enlist their help Craig, or one of his amazing guides, take care of you from the moment you get off the plane to the moment you leave. Throughout the experience you get one-on-one attention and are led by some truly excellent guides; people who are passionate about their work. There are also small moments of luxury throughout your time on island, from morning tea served with all of the extras to that amazing lunch I described and of course overnight accommodations. There are several luxury hotels and lodges on island such as Southern Ocean Lodge and Stranraer Homestead and even some comfortable hotels like the Kangaroo Island Lodge. Because we were only there for one night we missed the quotas for the more luxurious stays, but the Kangaroo Island Lodge was a great option. Clean, comfortable with nice meals and super attentive service; it’s hard to ask for much more.

Kangaroo Island is very easy to add to just about any plans for Australia you might have. We traveled overland by train from Perth to Adelaide, where we spent a couple of days exploring before taking the short 30-minute flight down to Kangaroo Island. There’s also a ferry service that, while longer, doesn’t take too long to navigate the mere 70 miles that lie between mainland and the island. Flying is to me the best choice and there are several flights a day so you can time it to your own schedule. When we were there we met folks on a tour of Australia who added a three-day stop at Kangaroo Island to their longer visit of the country. It’s a nice addition and the best way to see some of Australia’s most iconic wildlife in the wild, as they should be seen.

I really can’t stress the importance of wildlife to the overall Kangaroo Island experience enough. It was one of the most exceptional wildlife experiences I’ve ever had and I rate it up there with an African safari or penguin watching in Antarctica; it’s just that special. My most treasured memory is one I alluded to earlier in this post; when Craig granted us access to a padlocked meadow owned by some friends of his. I couldn’t help but feel like we had wandered onto the set of Jurassic Park; the overgrown bushes and trees were beautiful and there in the middle of the fields were kangaroos; lots of them. It was early morning so they were still somewhat active, foraging for food, hopping about and preparing for a long nap while the looming sun threatened another warm day. They were beautiful in every way and the experience of seeing them as they were meant to be seen, in the wild and not in a zoo or reserve was simply amazing. I had seen kangaroos in the wild once before, but I only had a fleeting glimpse before they hopped off into the bush. On Kangaroo Island though I stood just a couple of feet from them, neither of us worried about the other. And that is the real reason to visit this amazing island.

Kangaroo Island has a lot to offer visitors – have you been? What did you enjoy seeing and doing the most?