Over the last few years I’ve made it a new tradition to visit different parts of Europe around the Christmas holidays. I love seeing how various cities and regions celebrate the season and it makes Christmas that much more special for me personally. This year I did something a little different, I took a Viking River Christmas Market Cruise from Budapest to Nuremberg for the sole purpose of visiting several new cities and Christmas markets. It was one of the best trips I’ve ever taken and today, Christmas Day, I wanted to share with everyone some of the photographic highlights of that experience. 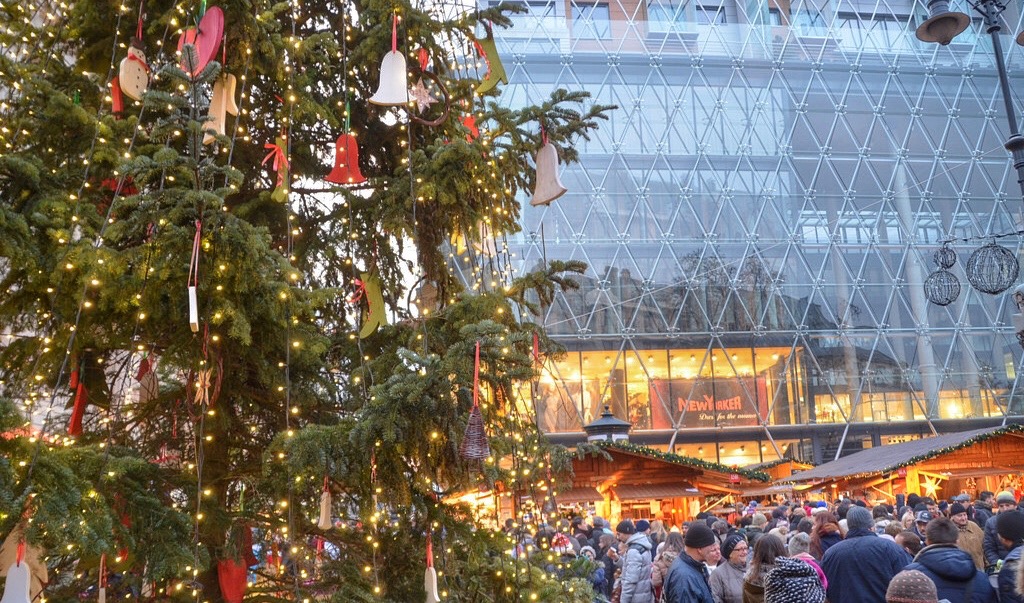 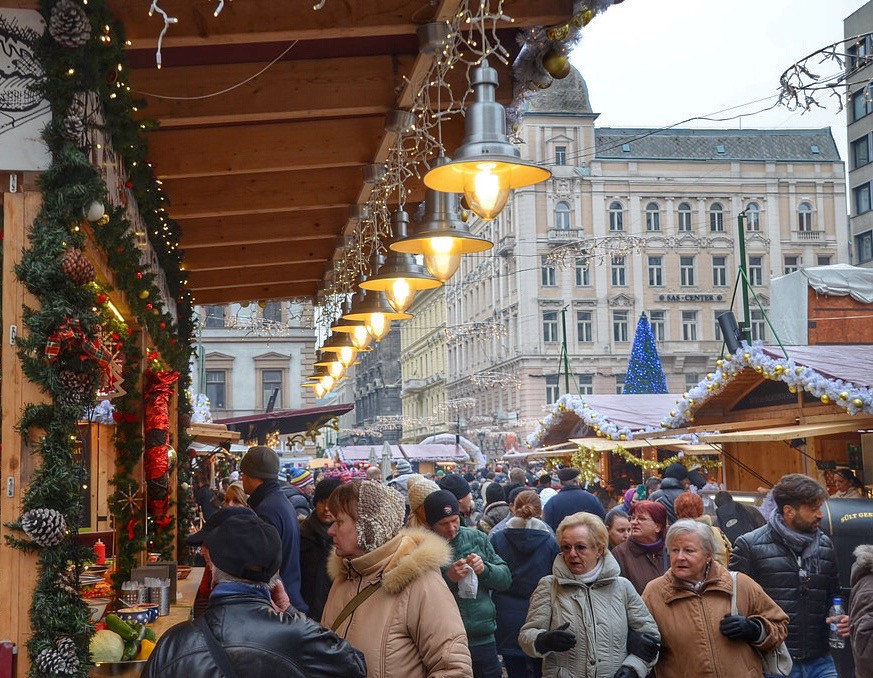 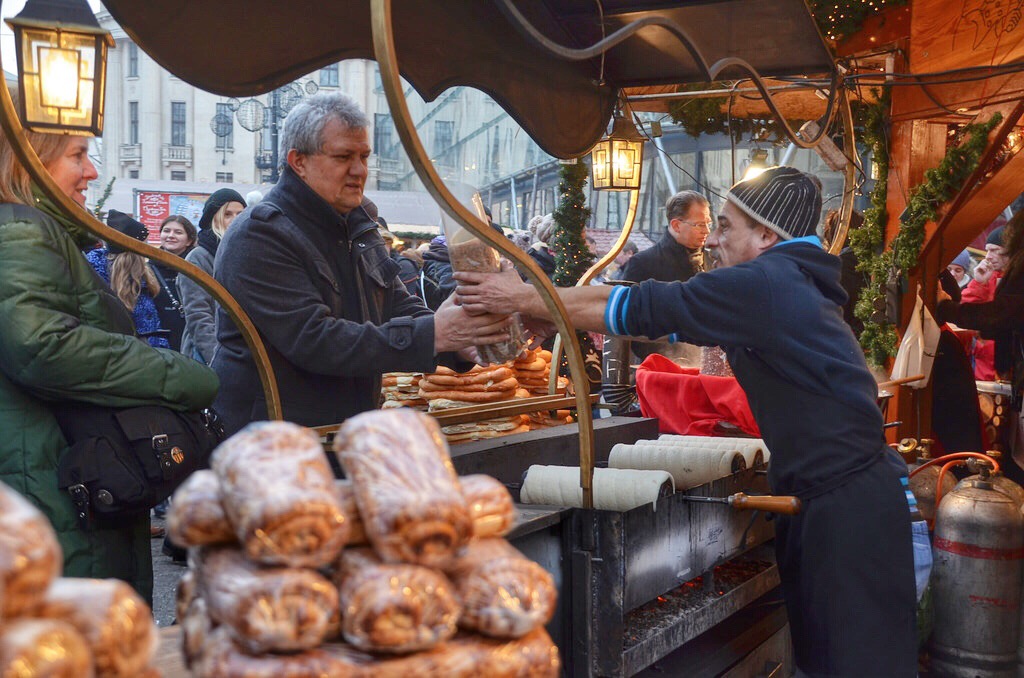 Like most large cities, Budapest has several Christmas markets but the centrally located one in Vörösmarty Square is the largest and most well known. In comparison with other markets, I was most surprised to see such a wide variety of savory food options. Stalls offered everything from traditional goulash to sausages and even strange concoctions involving rooster parts. When it comes to dessert though there’s only one real option – the so-called chimney cake. Originally from Transylvania, the kürtöskalács – Hungarian specialty yeast cakes – are cooked on a spit over red hot coals and then doused in icing to give it a unique but delicious taste. Served up in still steaming towers of cakey brilliance, there’s nothing better on a cold December night. 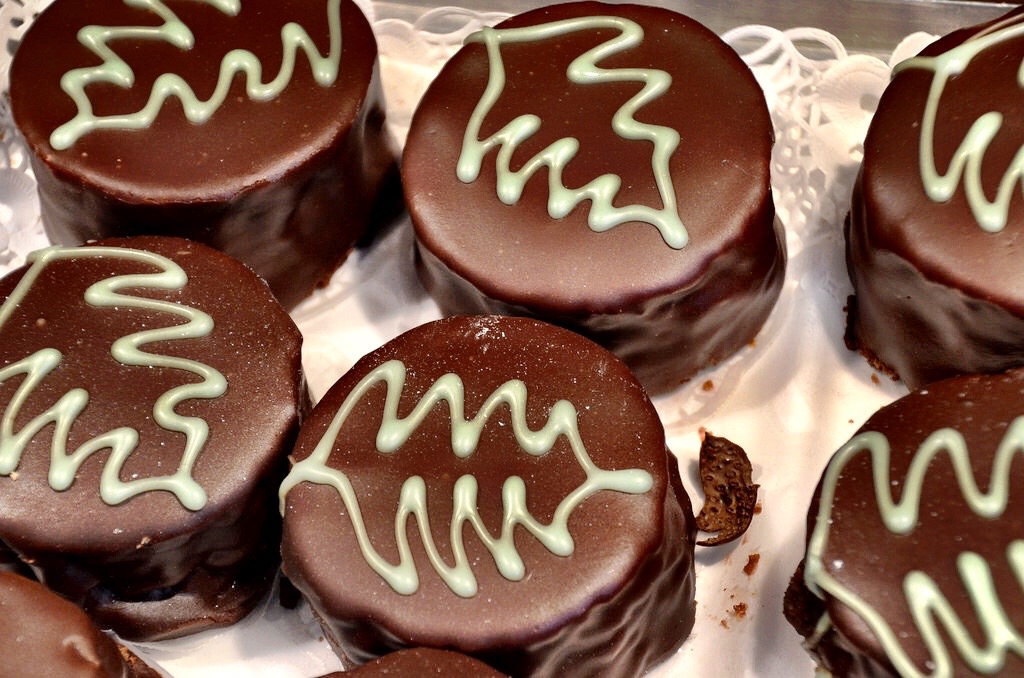 The Viennese embrace the Christmas season in a way few other cities manage. There are dozens of Christmas markets all over the city, and the major shopping districts are lit up at night in a dazzling array of special displays and lights. The major market in Vienna though is located at the massive Rathaus. This year the trees surrounding the market were festooned with hundreds of lighted displays, a real life advent calendar all leading to the market itself. One of the busiest in Europe, this market had a nice mix of food and gifts, with lots of delicious pastries made only around the Christmas holidays. While the gifts were ok, the food was the clear winner at this market and my personal favorites were the freshly made desserts, everything from fudges and brownies to special apple doughnuts. 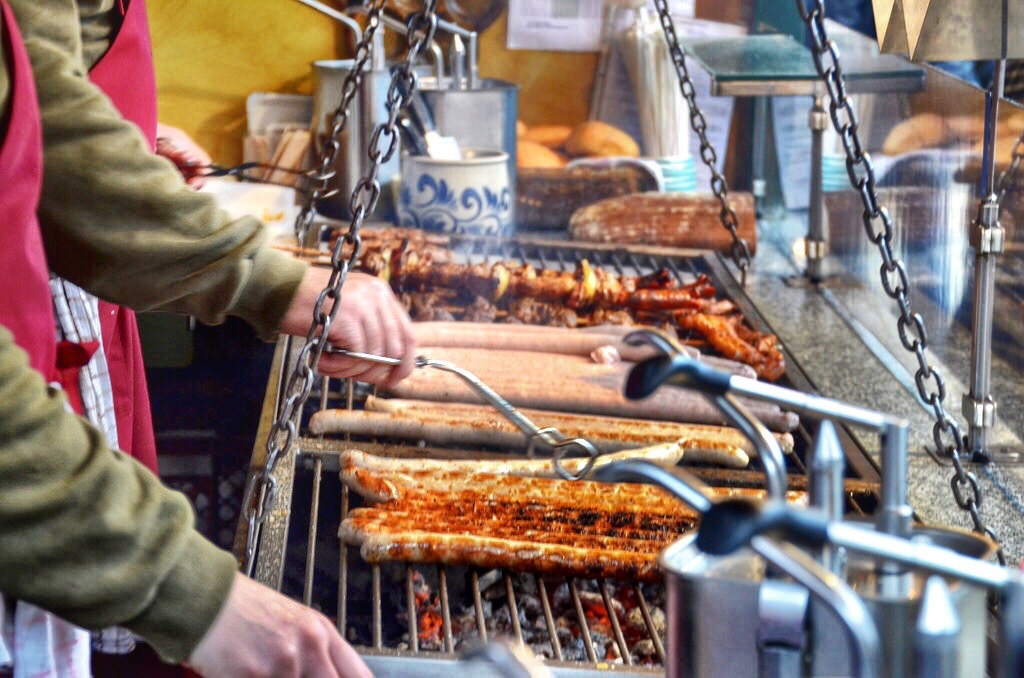 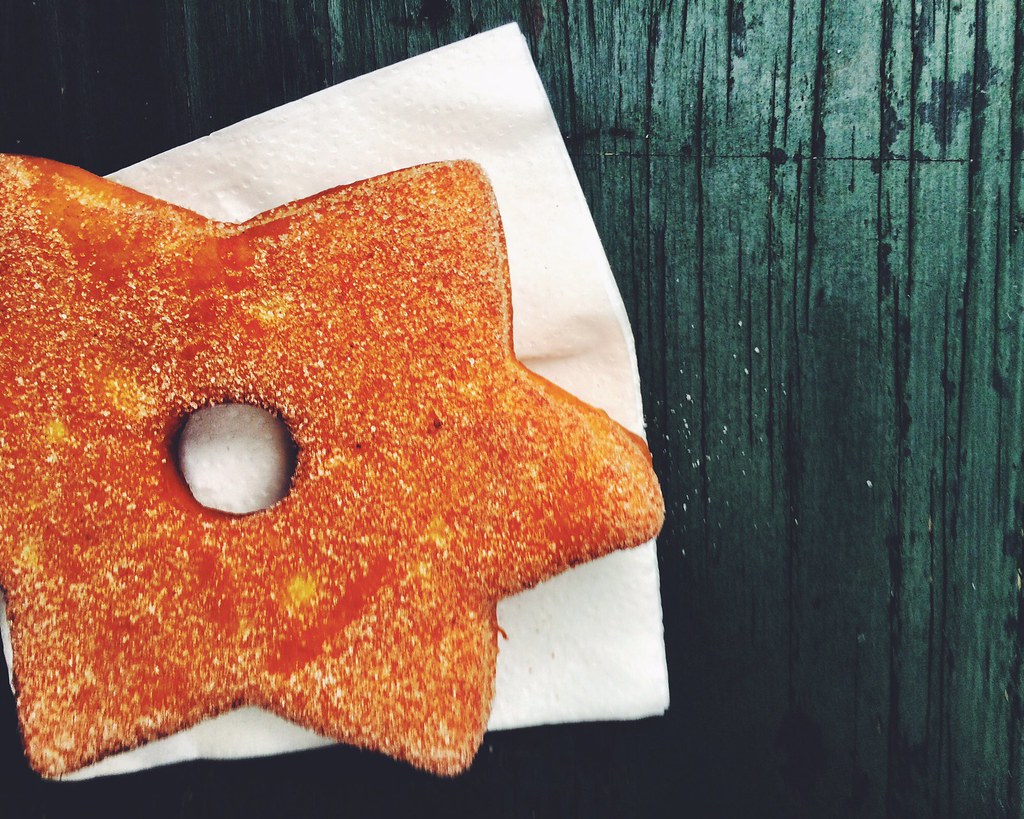 Bavaria is well known for its traditional markets and the small one in Passau was a great first introduction. While not as big as some others around Germany, it was rated as one of the best in the country and a quick walk around showed me why. Live music, games, traditional crafts and gifts and of course food made it a lot of fun to explore. I’m talking a lot about food, but that’s because food is an integral part of any good Christmas market. In Passau I found two items that quickly became personal favorites – ½ meter sausage sandwiches and a special Christmas star dessert. A local told me that the larger than average sausages were the only ones made locally, so I made sure to concentrate on that for lunch. Walking around though I also noticed a special Christmas star pastry that had a nice, light dough and a sprinkling of sugar that made it twinkle in the sunlight. 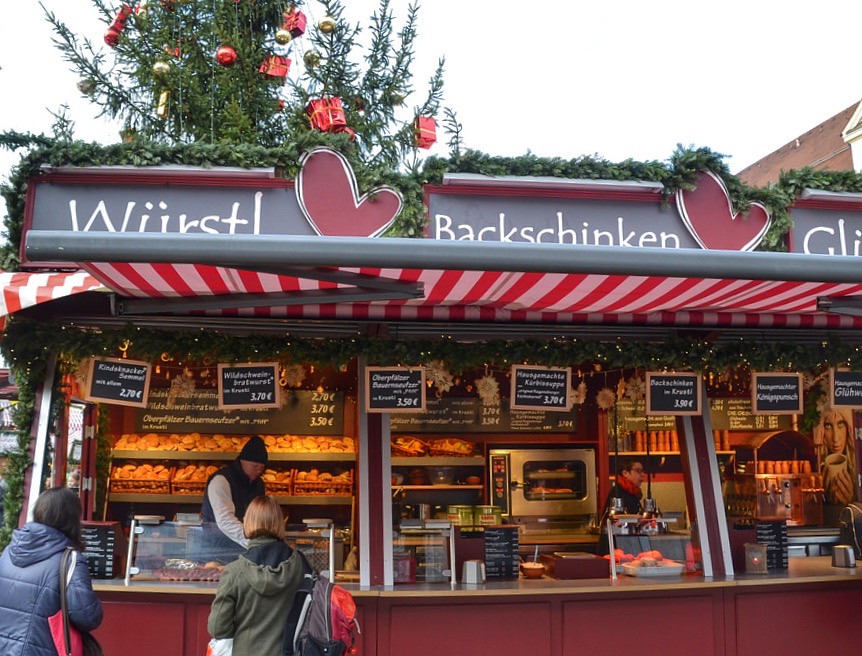 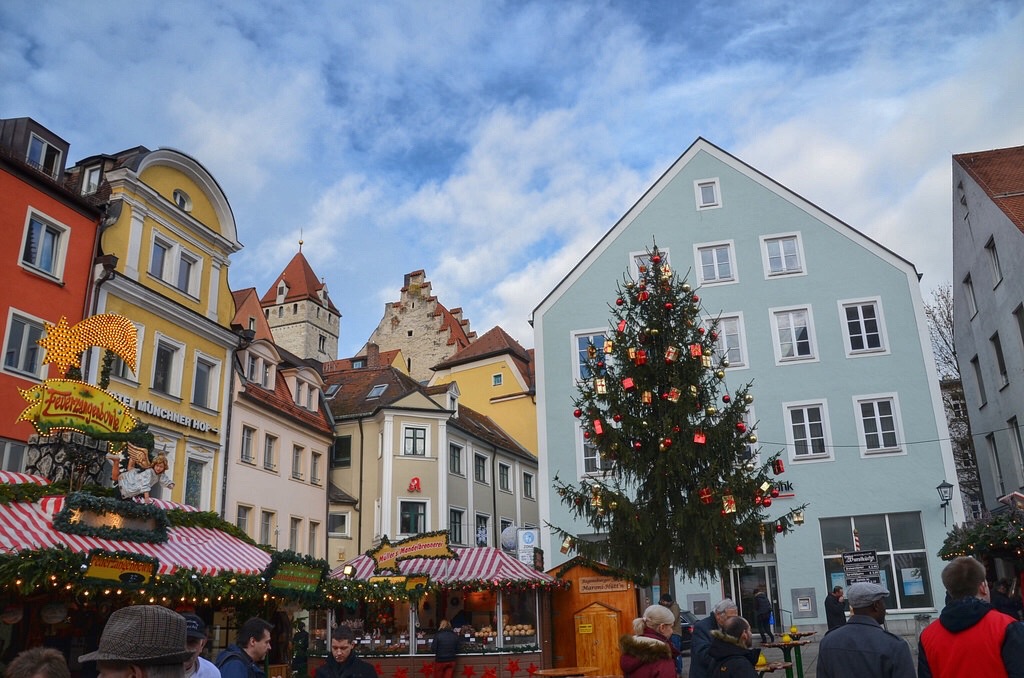 A larger city than Passau, Regensburg is known as a beautiful town no matter what time of year it is. I was lucky when I visited and had a beautiful sunny day – a rare treat in December. There are a few smaller markets in this university town, but the main Christmas celebration occurs around the 500-year-old Neupfarr Church. I guess I have a sweet tooth, because the first thing I noticed was a surprising lack of desserts. It’s funny how different each market can be from one town to the next, and while Passau offered my favorite sweet bite of the trip, there wasn’t a pastry to be found in Regensburg. But the city’s famous sausages, served three to a bun, more than made up for the lack of desserts. With a little locally made sweet mustard added to the sausages the resulting sandwich is one of the best I’ve ever enjoyed. There were definitely more gifts and crafts available at this market, reflecting the younger demographic of the city and its quirky, artistic edge. 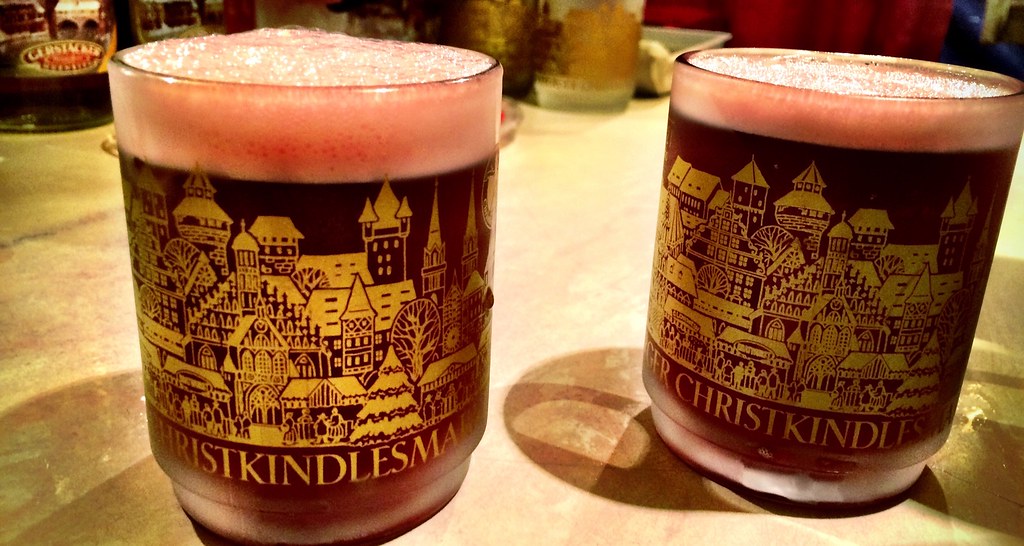 Home to what is arguably the most famous Christmas market in the world, it’s also one of the busiest with more than 2 million people visiting every year. What makes this market so special is the keen attention to detail. Officials forbid any modern items to be sold – all crafts and even foods must be traditional. Thanks to those rules, the Nuremberg Christmas Market is the prototypical Christmas market against which all others are judged. Although it was packed with people when I visited, I still had plenty of opportunities to enjoy the famous Nuremberg sausage sandwiches along with a glass of glühwein to wash it down. One of the most popular desserts and gifts is the city’s Lebkuchen or gingerbread, available in all shapes and sizes. While not as intimate as some other Christmas markets, a visit to the massive one in Nuremberg should be on everyone’s travel bucket list.

I hope you enjoyed my brief look back at the beautiful Christmas markets I visited in 2014. It’s one of my favorite times to visit Europe and I can’t wait to figure out which ones I’ll travel to next year!