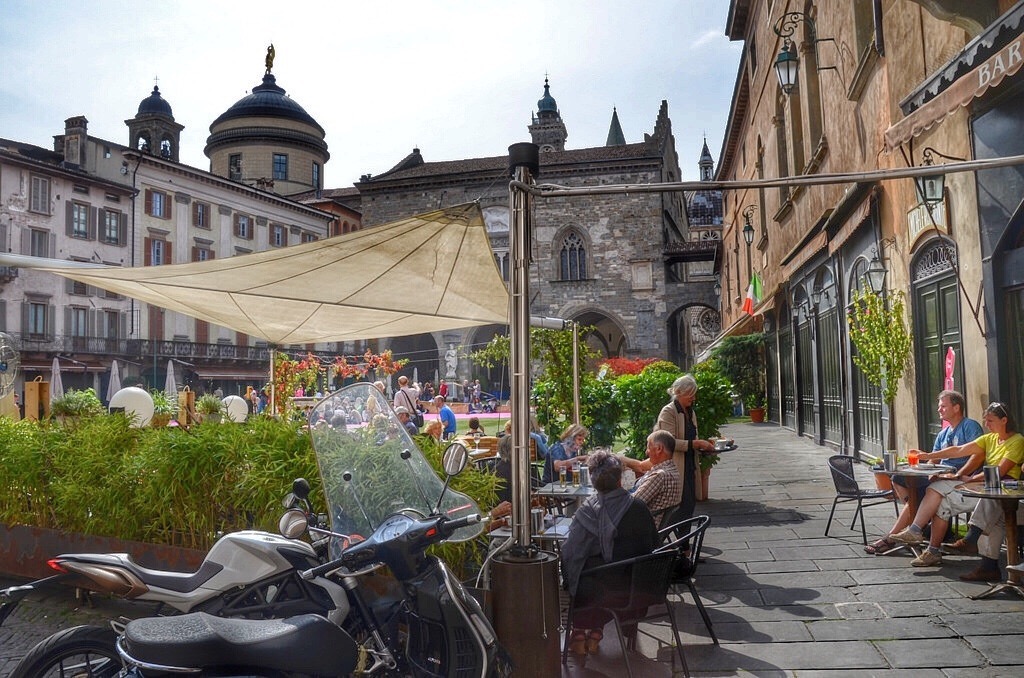 I’m a big fan of organization; just part of my Type-A personality I suppose. There’s nothing I enjoy more than planning out the details of a trip, sometimes though I go into a little too much detail. Over the years I’ve gotten better at over planning, I’ve tried to be more spontaneous and it’s worked. Sometimes. While in Italy I had the chance to explore the beautiful Lombardy region on my own, to discover the cities and towns that make it great. I worked with the local tourism board, but the mission was clear, to leave me alone to do my own thing – the only way to really travel and explore of course.

On my first day, I took the train from Milan to the popular city of Bergamo Italy. A large city, it’s the old town that attracts most visitors and thanks to a series of historical quirks it has remained little changed over the centuries. The local tourism board knew I was there and tried to help me out. They meant well, and they went ahead and provided me with brochures, CDs packed with information and told me how to join a free tour later in the day. It’s a common policy when writers visit a new place, except I didn’t want that. I didn’t want tour guides and maps, well-meaning individuals to escort me through the day. No, I wanted to discover Bergamo on my own, in my own way and so I did.

Bergamo is home to a whole host of diversions, from museums to old residences of importance, I have no doubt. I didn’t care though. That probably sounds bad, I should probably have said I wanted to learn the intricate histories of every corner and structure. But I didn’t. No, instead I wanted to explore the city, to learn it by feeling it emotionally and not intellectually. That’s when cities most burn themselves to our memories after all, and I wanted that for Bergamo.

There are times for this type of exploration; it’s not every time but sometimes it’s exactly the best way to see a new place. I just felt that Bergamo was just such a place and I was thrilled to discover my instincts were right in every way.

Centuries ago, Bergamo’s Old Town fell of out fashion, and the well-to-do decided to live down in the valley, leaving the medieval town forgotten and intact. Today it’s a gift to visitors who want to see what large swathes of Europe once looked like, untouched by famine, fire and war. 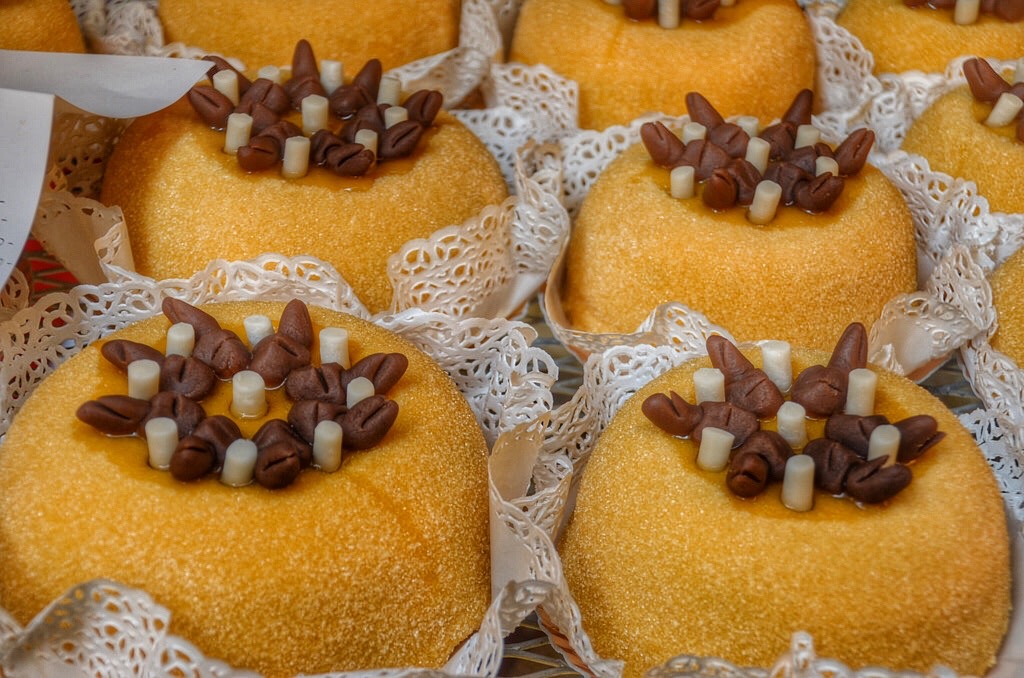 Narrow streets, accordion players on the corners and shops that specialize in everything from pizza to well-butchered meats and even the regional specialty, Polenta e Osei. Made to look like its savory cousin, in this case the polenta is actually yellow fondant and the bird marzipan. Inside was a delicious cake and a creamy hazelnut center. Delicious and based on the line in the shop, intensely popular.

It wasn’t until I stepped out into the main piazza when the real beauty of the city hit home though. The bell struck the half hour and stairs were covered in people enjoying lunch and chatting away the early afternoon. Calling the foothills of the Alps home, Bergamo looks like a part of the landscape instead of an interruption of it. From high atop the clock tower you can see how the buildings and hills all merge into one another, like the perfect jigsaw puzzle. It was beautiful and completely unexpected. 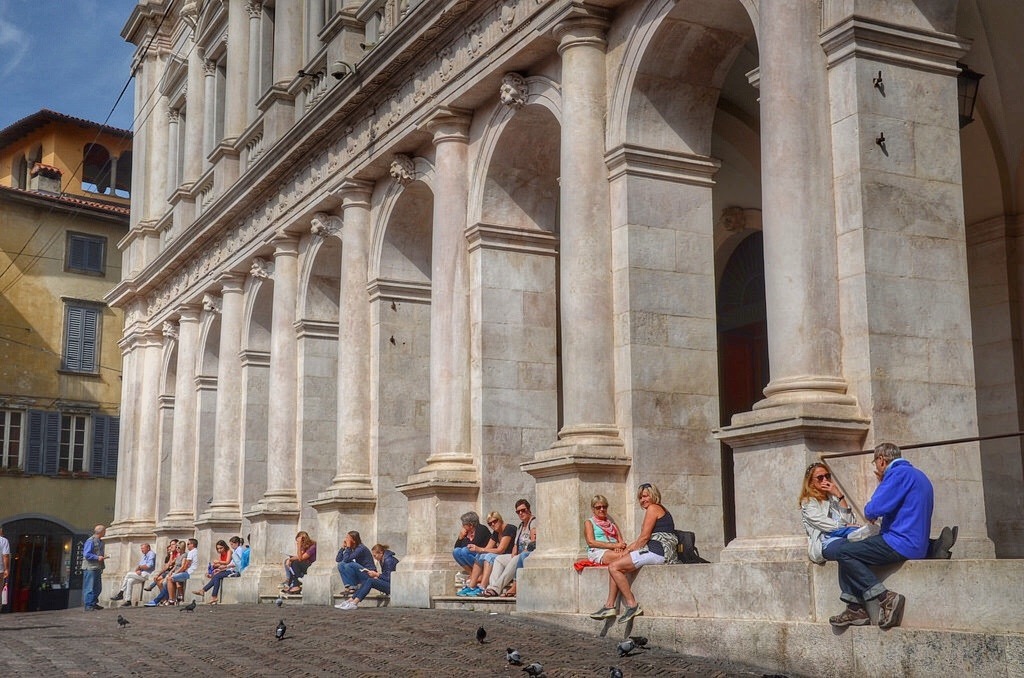 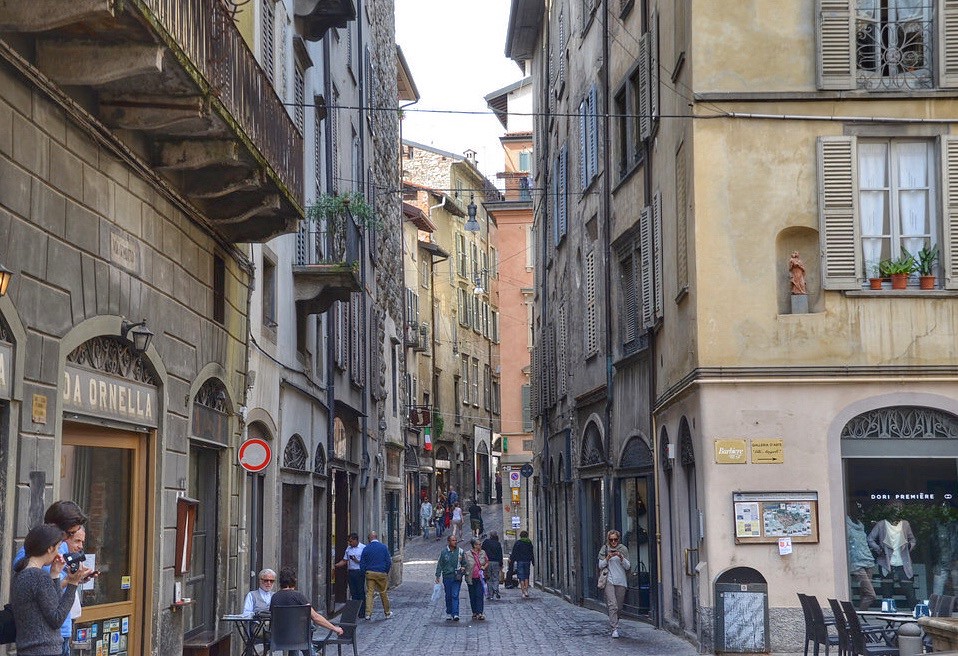 I spent most of the day in Bergamo but I really didn’t do that much. I didn’t go on a tour or look at old objects. Instead I walked around, got lost, enjoyed lunch at a cafe, ate some snacks and desserts and sat listening to a local musician for a while. I have no other facts about the city to offer except one. It’s a beautiful place to be in, to experience as a tourist and, if just for a fleeting moment, to feel like you belong there. I think that’s one of the reasons why we travel; for these personal and deeply emotional connections to cities that can’t be found in an art gallery or on a special tour. No, these moments can only be found by following your instincts and just enjoying your time there.

So the next time you’re in a new place and you are forcing yourself to do things that don’t excite you, that don’t get the heart thumping then you must stop. Stop, and do whatever sounds the most fun because if you’re not enjoying your visit, then why leave home in the first place?

Have you been to Bergamo? What did you think?

This post was brought to you as a result of the #Blogville campaign, created and managed by iambassador in partnership with Lombardy Tourism and Emilia Romagna Tourism. LandLopers retains all editorial control of what is published and as you know, I never shy away from honest commentary.

2 thoughts on “Joy Of Doing Nothing: Discovering Bergamo, Italy”