Italy is home to a lot of beautiful towns and cities; it’s just part of what makes traveling there so much fun. I recently had the chance though to explore one that was new for me, one that I didn’t know a lot about and one that frankly blew me away. Many people know about the beauty and history of Mantua, Italy, and after exploring this beautiful city in Italy’s Lombardy region, I quickly understood why so many people consider it one of their favorite places to visit. Here’s a look at how I experienced Mantua in seven of my favorite photos from my time there.

The markets in Mantua are a weekend tradition and it’s with a certain amount of historical accuracy that the modern market takes place where they have always been held, in a space that goes back centuries. I’m always so impressed with the quality of fresh ingredients in Europe, and my brief walk through Mantua’s market further reinforced that admiration. The star of the market when I was there were the pumpkins, in season and delicious. A regional specialty is freshly made pumpkin ravioli, a tasty dish I was lucky enough to enjoy several times during my visit to the Lombardy region. 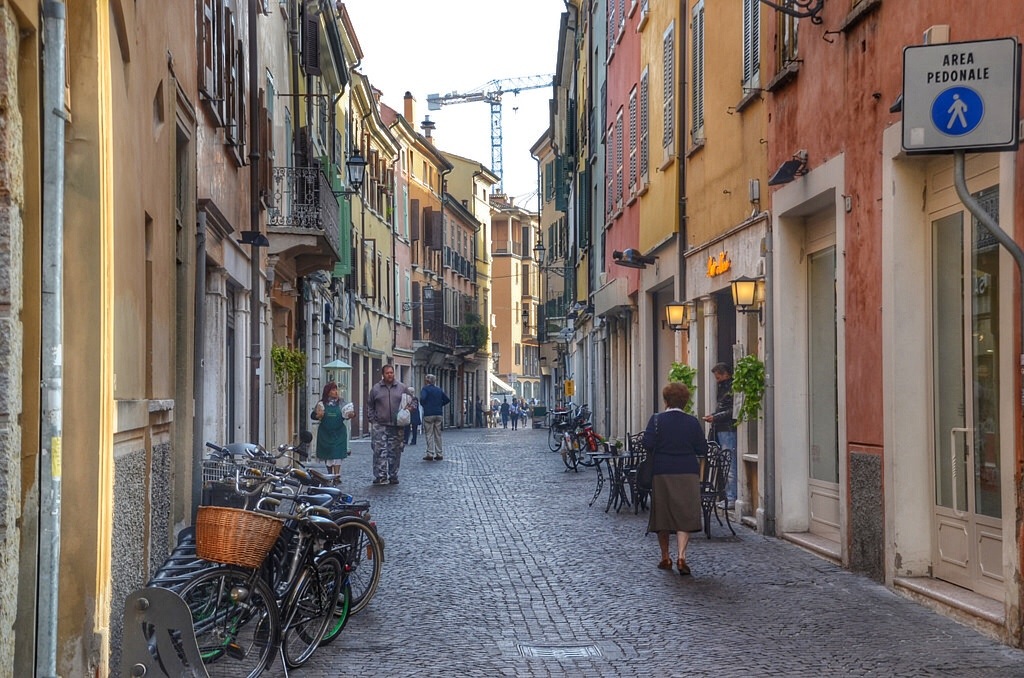 Maybe it’s the American in me, but I will never, ever, get enough of classic European street scenes. My non-American friends probably think I’m insane, but we have nothing like this in the U.S. and to walk these streets is always a thrill for me. Mantua is bigger than I had imagined, and even though there is a lot to do along the tourist route, it’s a vibrant modern city too. I visited over a weekend and had the chance to see folks running their weekly errands, enjoying time with friends at the local cafes and restaurants and just taking life easy. While the famous sights were great, it was feeling the real pulse of the city that made the visit so very special.

History Just Around The Corner

I’m a sucker for history, and when I turned a corner in Mantua and saw this in front of me I couldn’t believe how beautiful the scene was. Mantua is a UNESCO World Heritage designated city, and the buildings surrounding the Piazza Sordello help explain why. Mantua was recognized in part for its architecture and for prominent role in the dissemination of Renaissance culture, all of which can be seen around this beautiful piazza. Adjacent to the plaza is also another important building in both Mantuan and Italian history, the Ducal Palace; the seat of power of the Gonzaga family for centuries.

I don’t normally gush at visiting a theater, but the stunning Bibiena Theater in Mantua is honestly unlike anything else I’ve ever seen. Designed and built in the 18th century, the beauty and symmetry of the interior boxes and rows of seats seemed like a beautiful symphony in their own right. Design isn’t the only draw to the theater, soon after it was opened the Bibiena hosted Wolfgang Amadeus Mozart when he was just 13 years old. They still have concerts and performances there today, but tourists are also welcome to visit during the day, step on stage and for a moment imagine themselves in front of a packed house at one of the world’s most famous theaters. 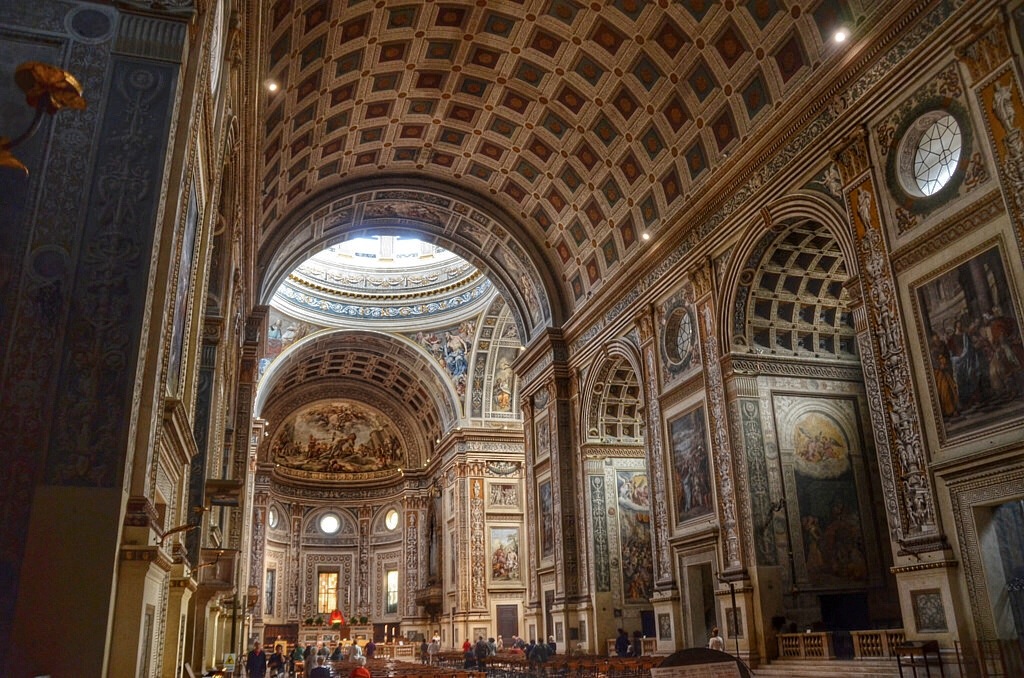 Like most people who have visited Europe a few times, I’ve been to a lot of churches, cathedrals and basilica in my lifetime. So many that it’s rare, sadly, for me to continue to feel impressed by them. But the massive basilica in Mantua did just that, it impressed me. Started in the 15th century, this gigantic building took more than 300 years to complete, a fact that boggles my mind frankly. The basilica was built though with one purpose in mind, to protect and honor a holy relic. Popular during the Dark, Middle and even Renaissance ages, holy relics are items of or belonging to holy individuals that have been venerated over time. For Mantua, the relic in question is a drop of the blood of Christ, scooped up along with earth by a Roman centurion. The relic has been in Mantua since Roman times, but it wasn’t until the 11th century that officials rediscovered and started to honor the relic. Believe what you will, but the relic was and is important to the city and is still shown to the public every year on Good Friday. 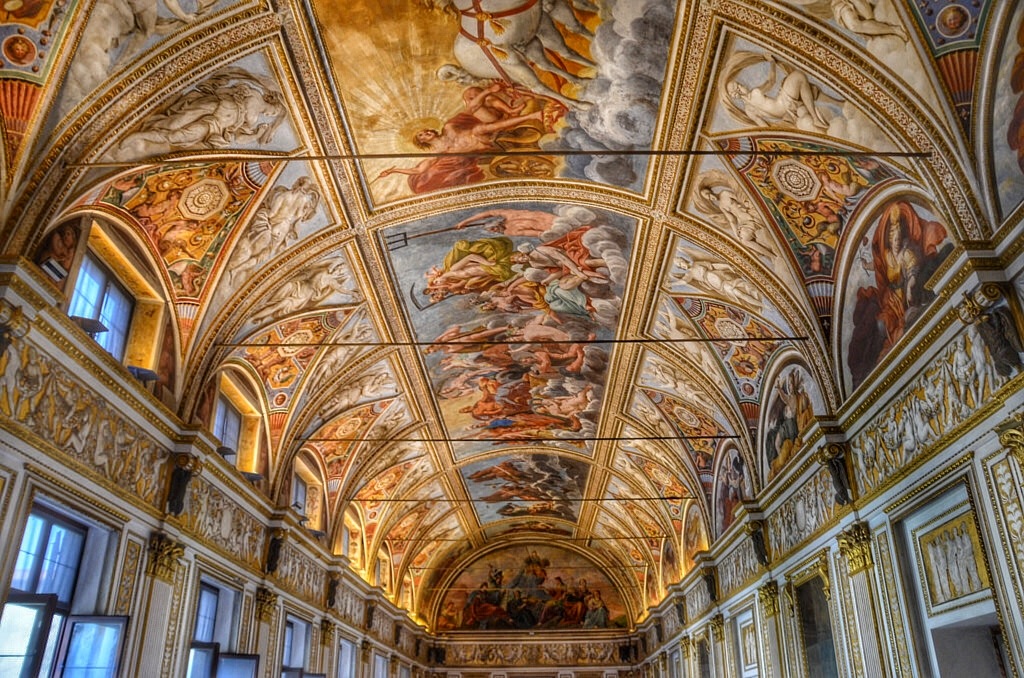 Just like churches, I’ve also been to a lot of palaces and at one time vowed to never tour another Royal Apartment again. But then I arrived in Mantua. The Ducal Palace here is somehow different from others around Europe and I quickly found myself lost in the beauty of the Palace and the artwork contained inside. The buildings that make up the palace were at one time home to the powerful Gonzaga family, the ruling family of Mantua and several fiefdoms around Europe. As one of the continent’s most powerful noble families, their influence over the centuries was considerable, from birthing a future saint to some of the most powerful monarchs of Europe. Their home evolved over the ages, and by the time the dynasty died out the Palace was a massive complex with 500 rooms. Their impressive art collection remains somewhat intact inside, representative of the many famous, and not so famous, artists whom they supported over the decades.

I’m beginning to sound like a grumpy traveler, but I’m more of a history museum kind of guy and have a let less interest in art. That being said, when confronted with shockingly important and impressive works of art, I do indeed take notice. Such was the effect when I walked into the famous Wedding Room inside the Ducal Palace. While not an especially large space, the entire room is frescoed with illusionistic paintings by Andrea Mantegna, all painted in the 15th century. If you ever wondered why Italy’s role in the Renaissance was so extraordinary, this room should help explain why. At a time when most art was two-dimensional, flat and boring, rooms like this completely changed the art world and even how people looked at the world. I found myself getting lost in all of the tromp l’oeil effects and when the five minutes limiting my time there was up, I had to pry myself out of the room. If you ever find yourself in Mantua, don’t miss this room.

These are just a few images showing how I experienced Mantua. There’s no right or wrong way to see this beautiful city, but my time there was in fact one of the highlights of my most recent trip to Italy.

Have you been to Mantua? What impressed you the most?

This post was brought to you as a result of the #Blogville campaign, created and managed by iambassador in partnership with Lombardy Tourism and Emilia Romagna Tourism. LandLopers retains all editorial control of what is published and as you know, I never shy away from honest commentary.