I’d heard of it before, but really wasn’t sure where it was located. I always assumed it was a small duchy or principality tucked away in some Alpen mountain pass. It wasn’t until a recent visit to Rimini, the beautiful beachside town in Italy’s Emilia-Romagna region when I learned about one of the world’s smallest countries and finally had the chance to visit it for myself.

Officially known by the way-too-cute-for-modern-geopolitics name of the Most Serene Republic of San Marino, this microstate is entirely enveloped by Italy. Just 24 square miles in size, it’s easy to dismiss this microstate, but that would be a mistake. As any one of the 30,000 residents of San Marino will be quick to tell you, unlike many other small countries, this one is a republic; in fact it’s the oldest constitutional republic in the world. Founded in the 3rd century, it wasn’t until the 13th century when the nation went to a form of elected governance. Two councils lead the nation, headed by two Captains Regent who they select every six months. The process has been ongoing unchanged since 1243 and frankly, it’s amazing they can constantly find two new people to lead every six months, but they do. 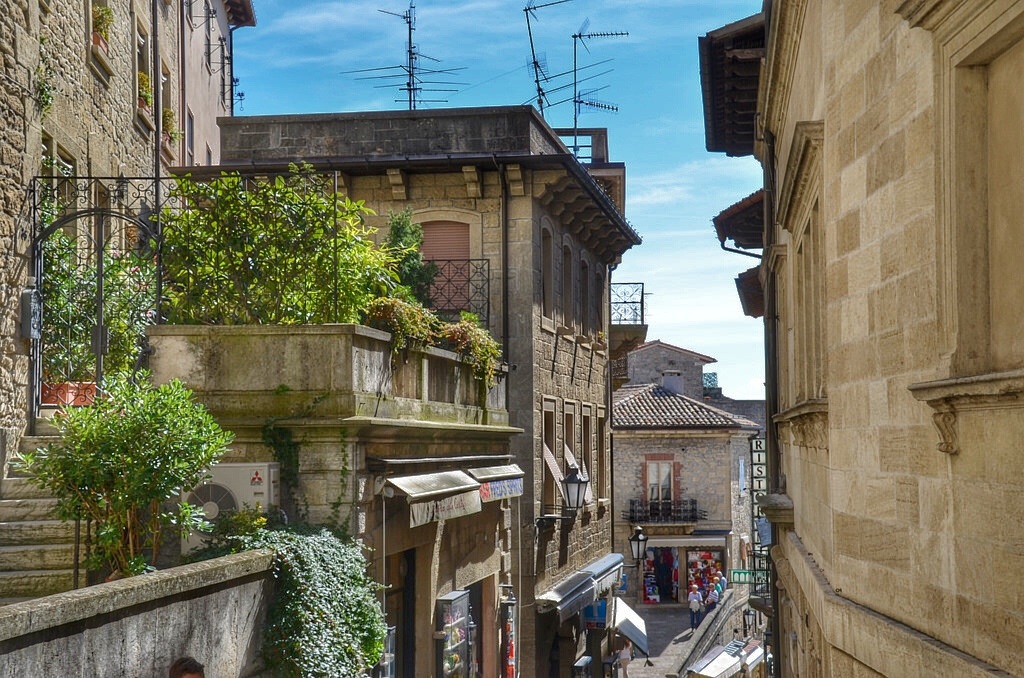 Visiting San Marino from Rimini is easy, there’s an express bus that in under an hour will deposit you at the foot of the mountain nation. I was partially right before, mountains are a big part of life in San Marino and are also the reason why it’s survived as a sovereign nation for so long. The 3rd smallest country in Europe, San Marino is defined by the Apennine Mountains and the entire city-state is made up of very hilly terrain.

That was my first challenge in visiting, the hills. Built on the side of a mountain, the hills protected it from invasion but today they are a workout for curious tourists. Thankfully though it’s not a very large place, so getting around is still fairly easy. Wandering through town I wasn’t entirely sure at first what to do. San Marino is well positioned for tourism; every shop and restaurant clearly there just for the tourist trade. But there’s a lot more to San Marino than the destination for thousands of day-trippers and I wanted to find it.

As a political junky, I started my exploration in the Public Palace, the seat of government for San Marino. Walking around the oddly ornate building and peering into the legislative chambers I was impressed. It wasn’t big, naturally, but seemed more modern and up to date than many others I had visited. Then, out of one of the Palace windows I caught not for the first time that view.

Stunning views of the surrounding valleys dominate any visit to San Marino. For centuries their mountaintop position allowed them to see invading enemies, but today those same towers and walls offer stunning panoramic views the likes of which you may not see again while visiting Italy. I hadn’t found the IT factor yet though, the reason why I really wanted to visit and so I set out, climbing further up until I saw what are the most well known images of San Marino, the Towers.

Three towers were built over the centuries for defensive reasons, meant to protect the small state from frisky locals and powerful princes. No doubt unwittingly, the San Marinos built towers that weren’t just practical, but amazingly beautiful. Looking at them today as they tower (see what I did there?) over the valleys, looking off into the distance and the shoreline beyond, they are what I imagine every fairytale castle to look like. They are direct out of central casting for classic European beauty.

They’re not big though and standing in them it’s hard to imagine many people working within their confines. But they didn’t have to. It’s 2014 and the bus I took up the steep roads to San Marino whined and complained the entire way up. Now imagine it’s 1450, no buses, no significant roads and all you had were horses and men on foot. This is the real reason why San Marino remained independent for so very long; no one could get up there. The San Marino Towers are great reminders of that and while their value today is purely aesthetic, it’s easy to imagine serving as lookout atop that beautiful mountain centuries ago.

Visits to San Marino tend to be brief. It’s small, there’s only so much to see and do and for me, the hilly walking got a little annoying after a few hours. But there’s also no denying the travel magic contained within the city walls. Sure, most of the shops are touristy, but they’re in traditional buildings, ones that have been there for centuries. Walking along the winding streets, it’s very easy to imagine yourself in a San Marino of years gone by and you start to appreciate what life must have really been like. There are very few places left on this Earth, much less in Europe, where you can really and truly get this sort of perspective and it is for that reason more than any other that San Marino lives on as a place of enchantment for everyone who visits.

Have you been to San Marino? What did you think?