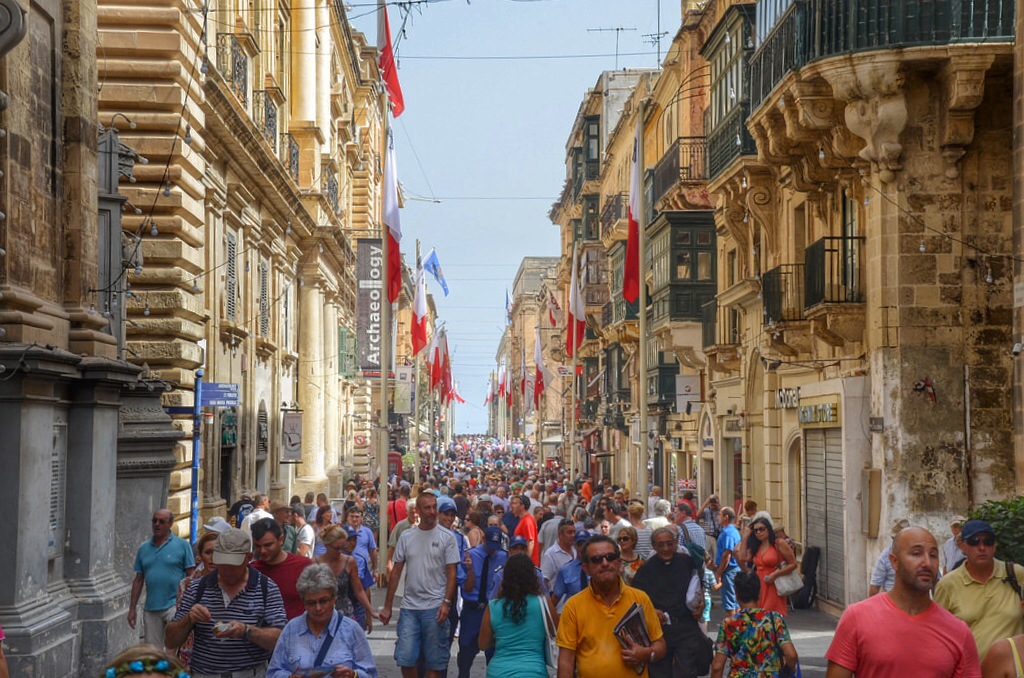 Malta, a small island in the Mediterranean somewhere between Sicily and Libya, is at times misunderstood. Most Europeans know it as a quick and easy beach getaway and Americans, well, most of us don’t know much about it at all. But that’s ok; I knew about it and in fact, it is a country I’ve been trying to visit for nearly 20 years. Why? Well, that’s a long story, which I will tell, but first a closer look at Malta and its famous knights.

Malta is an archipelago; a series of islands but the main island is naturally just called Malta. This is where most people visit, where all of the cruise ships stop and where most you’ll discover most of the historical sites. This is also where you’ll find the capital of Malta, Valletta; a beautiful city settled around the Grand Harbour and one that looks like a medieval town right out of the pages of Game of Thrones.

This fortified city has always had defense on its mind, a fact plainly seen through the watchtowers, gigantic walls and even the street grid system itself. Malta was (and is) prime real estate for any power with Mediterranean domination on their mind. What was at one time martial planning though today is architectural beauty. It’s hard not to fall in love with the forts and the views across the cannon batteries to the Three Cities. Malta’s beauty is one deeply engrained in the warm stones used to fortify it.

The Knights of St John

If you spend more than five minutes on Malta you will undoubtedly hear about the Knights of St John Hospitaliers. They built Valletta back in the 16th century and their influence is everywhere, from the smallest of Maltese crosses above humble doorways to the massive St. John’s Co-Cathedral that oozes power and influence from every pore. But few people actually take the time to learn about the Knights, a mistake that is easily corrected.

Don’t worry, I’m not going to bore you with a long history lesson, but here are a few facts about the Knights that everyone should remember. (I’m even going to bullet-point them for your convenience; see how nice I am?)

If and when you visit keep these simple facts in mind as you wander around the town now known for its beautiful architecture and stunning streets. Wander down to Fort St. Elmo where the Turks were finally defeated and look around everywhere you go for the distinctive, 8-pointed Maltese Cross – the emblem of the Knights of St. John. They represent the eight beatitudes of the Bible, and even the power of that simple cross still resonates around the city today.

Why this was personal

To an outsider, the reason why this was a personally important visit may seem silly at first, but it is something that I take very seriously. In the 1820s at Union College in New York, the first three social fraternities in the United States were established. Known today as the Union Triad, they are all three still in existence and flourish around the country. One of these, Delta Phi, is the fraternity into which I entered as a student at the College of William and Mary and it is this fraternity that connects me to the Knights of St. John.

Since the start of Delta Phi in 1827, this connection to the Knights has been an integral part of the fraternity. At Yale, for example, the fraternity exists as the St. Elmo Society, a nod to that important fort on Malta. Say what you will, but there are many benefits to the fraternity system, ones that I couldn’t have believed until I joined one back in the mid-1990s. So much more than the raucous imagery displayed in films and on TV, at the heart of the fraternity system is fellowship, intellectual growth and even piety. At least it is for Delta Phi and I know that’s what it means to me. But it was this connection that gave birth to my interest in the Knights.

During my college days I was forced to learn the complete history of the Knights of St. John for membership into the fraternity. Delta Phi affiliates itself with them and learning about their legacy is a very important part of membership. At the time I was obsessed with the Knights, but almost immediately after graduating college I forgot about them. I was going through a very rough time in my life and for reasons still not understood even by myself, I eschewed old friends and distanced myself from people I had once called Brothers.

Then, about a decade ago, I realized the error of my ways. I realized that this group of individuals was more important to me than I had ever realized. They are friends that will stand the test of time unlike almost any other I have. It’s a silly test, but a quick look at my friends on Facebook show that of the folks I’ve known for more than 10-15 years, they’re almost all Fraternity brothers. Very few others from college still stay in touch, but this unique bond I have with these fellow Delta Phis persists through time.

Soon after realizing the importance of this friendship, of this unusual fellowship, my interest in the Knights rekindled. I picked up those dusty old books once again and furthered my own scholarship into this Order that is nearly 1,000 years old. Just think of the history they’ve helped shape over the centuries, what they’ve seen and done, the treasures they’ve held and what the world would look like without them. You may not know a lot about them, but that doesn’t mean their importance isn’t profound.

Although the Knights may not call Malta home anymore, it is impossible not to encounter them as you walk around Valletta. Their legacy is everywhere and easy to find. Don’t believe me? Well, when you visit try to count all of the Maltese crosses you see around town. You can stop at 1,000.

So that’s a little bit more information about Malta, the famous Knights of St. John and why it’s all so very important to me. While you may not have this personal connection when you visit, you can still go and appreciate the beauty of Valletta and the remarkable history of the men who built this mighty city.

3 thoughts on “Knights, The Beauty Of Valletta And Why Visiting Malta Was So Personal”