I had one main mission in Cambodia – the temples. These relics from a long gone era are the stuff of legend and in my mind I had built them up into a tourist force to be reckoned with. And for the most part, I wasn’t disappointed. From the hectic Angkor Wat to more relaxed temples far off the beaten path, here’s a look at some of the many beautiful Khmer temples I explored around Siem Reap, Cambodia.

It may not look it today, but Cambodia and huge swaths of Southeast Asia at one time was home to the largest pre-industrial urban center in the world – the Khmer Empire. Ruling for 700 years, until its fall in the 15th century, the power and wealth of this civilization cannot be understated. Today, we are still rediscovering the size and scale of this empire, with new revelations surfacing all the time. It’s for this reason that Siem Reap and Cambodia in general is so popular with travelers, for the opportunity to catch a glimpse of what life used to be like for those industrious people.

Thanks to the size of the empire, there are a lot of temples and buildings all around Cambodia, but especially Siem Reap. Home to the UNESCO World Heritage Site of Angkor Wat, that’s just the figurative tip of the iceberg when it comes to understanding the life of the Khmer people. Days, probably weeks, could be spent exploring them all, but a few are amongst the most popular for those who can only spend a few days living out their Indian Jones dreams.

The largest religious monument in the world (It’s true, look it up) Angkor Wat started life in the 12th century first as a Hindu temple before shifting to a Buddhist one. Because of that, one sees not only at Angkor Wat but in other nearby temples a curious mingling of images and beliefs, coming together to live in aesthetic harmony.

Angkor Wat wasn’t my favorite of the Cambodian temples; I found it too crowded and frankly not as interesting as some other, smaller temples in the area. But if you’re in Siem Reap, you have to visit – not to do so would just be silly. So go at dawn with everyone else, take the photos and move on to some other more interesting sites.

My favorite ancient Khmer site, be sure to allot plenty of time to properly explore this amazing city. The name means Great City, an epithet as meaningful today as when it was first built in the 12th century. Not just one temple, but truly an urban complex comprised of a variety of buildings, spending the afternoon in Angkor Thom is the best way to understand the power and influence the Khmer Empire once enjoyed.

Bayon is the star of the show at Thom, the last state temple built at Angkor Thom and just like most of the other Khmer buildings, incorporated elements of Hinduism, Buddhism and local animist beliefs. The feeling is undeniably eerie as you walk amongst the many stone towers of Bayon, the massive faces staring straight through you. They’re said to be of the god-king Jayavarman VII, the monarch responsible for the massive temple. All but lost to time, his public works projects are his lasting contribution, still here and still impressing visitors as they did 800 years ago.

A temple-mountain built of sandstone, this massive building is meant to be representative of a mythological mountain with its five-tier pyramid and surrounding moat. Dedicated around the year 1,000, this was the first state temple for the ruling monarch at the time and yet it was never finished. Legend says that lightning hit the building during construction, a bad omen, and so all work stopped. More likely a power struggle erupted, but either way it’s an interesting glimpse at the might of the Khmer.

My guide was young and had a quirky sense of humor. Along the way he saw how interested I was in the temples, so we made a few impromptu stops to temples barely standing and not a tourist in sight.

One of the those stops was at Ta Nei, a small 12th century temple dedicated to Buddha. More than marveling at the still (mostly) intact stone reliefs, it was an amazing feeling to be there, all alone, traipsing over stones and carefully entering ancient doorways. The temple is a mess, it hasn’t been preserved and while scientists are working on it, it’s just one of many such temples around the area. Careful not to disturb anything, I carefully leapt from one fallen stone block to the next, trying not to think too much about what creatures might be lurking underneath. There may not be any fancy signs or reconstructions here, but it’s a great way to understand the work archeologists have before them. 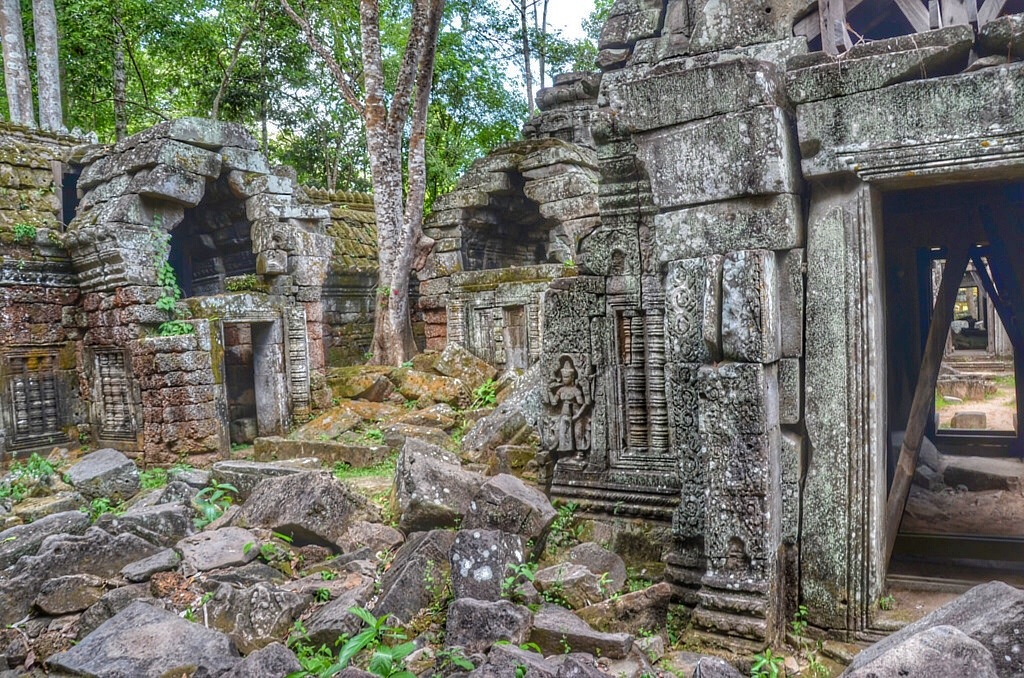 The so-called jungle temple, Ta Prohm is another UNESCO World Heritage site and one of the most popular temples amongst tourists. That’s because unlike many of the other temples in the area, Ta Prohm has been left mostly the way it was found. That means partially reclaimed by jungle including the temple’s most recognizable feature, the massive trees growing around and through the temple itself. It’s this classically “lost” look and feel that has prompted its popularity in pop culture, including a starring role in Tomb Raider.

I finished up what was a busy, intensely hot but amazingly fun day with a final temple stop, to this small 10th century temple. It didn’t look that small though, thanks to innovative architecture and trompes l’oeils techniques that make it seem larger than it actually is. Known for being made of brick as well as its bad reliefs inside, there’s not a lot of there-there, but still an interesting stop on a day full of them.

Tourists usually visit Siem Reap for one reason – the temples. For me, it was the culmination of a long held dream to see Angkor Wat in person, but be sure to spend a few days exploring all of the temples and ancient cities around the area. Sure, Angkor Wat is great, but it’s important to visit everything in order to really appreciate the power, grace and beauty of the Khmer Empire.

Which of these beautiful temples do you want to visit first?

12 thoughts on “Closer Look at the Mysterious Temples of Cambodia”