I think most kids have a fascination at some point with dinosaurs; I know I did. For my third grade science fair project I remember pouring over encyclopedias and coming up with a massive model of what a mighty T. Rex must have looked like. Naturally I didn’t do very well since it was more of a report than a project, but it was representative of a fierce love that many of us have for these strange former inhabitants of Earth. That personal interest may have waned for a few decades, but was instantly rekindled as I picked up the impressive trail of dinosaurs while exploring southern Alberta.

Dinosaurs are big business in Alberta and with good reason. At the stunning Dinosaur Provincial Park, about 30 minutes from Brooks, paleontologists have found more than 40 different species of dinosaurs resulting in one of the most prolific and important dinosaur fossil sites in the world. The fossils at the park date from the Late Cretaceous Period (75 million years ago) and contain about 5% of the world’s known dinosaur species. That’s a pretty impressive statistic if you think about it.

What are Badlands today was once a vast and lush coastal plain, creating conditions that were perfect for the entombment and eventual fossilization of dinosaur remains. Digs have been ongoing for decades and many scientifically important finds have been dug out, with many more waiting for future paleontologists. It’s not a museum though; it’s a massive park and a beautiful one at that. Given the importance of the area, access is restricted but don’t worry, there’s plenty for visitors to do.

If dinosaurs are your chief reason for visiting (and not the gorgeous scenery) then be sure to join one of many enrichment programs at the park. Visitors can work in a lab, learning how to reconstruct a dinosaur or head out into the field and look for the next big find. I decided to go on what is a classic hike for the park, the Centrosaurus Quarry Hike. 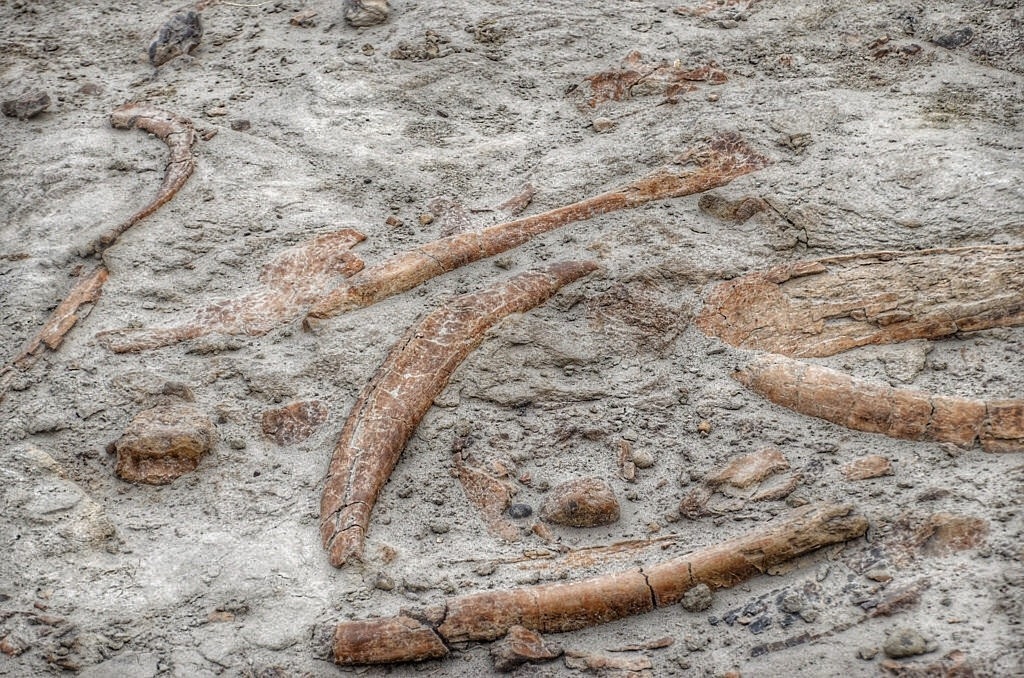 This 3-kilometer hike begins in the middle of the sprawling park and a knowledgeable ranger leads the way through the scrub. Along the way visitors learn more about the process that led to the huge number of fossils now found in the area, as well as some recent discoveries that have helped the world better understand both dinosaurs and the era in which they lived. More than anything, I was surprised by the barren beauty of the park itself. The Badlands are called that for a reason and while they may be inhospitable, they have a certain desert charm and appeal. I loved them and personally, that was as much fun as was seeing fossils stuck in the dirt. The fossils! The hike ended at an old dig site, kept in the same condition to serve as a teaching tool for people like me. There in the rock bones protruded, remnants of a long lost dinosaur that was probably the victim of a flash flood. Standing there, staring at the fossil remains is an experience as unique as any other in the world. It’s a glimpse back in time, to the world’s prehistory and I was amazed that such important sites are thankfully open to the public.

Dinosaur Provincial Park offers a lot to visitors and they have definitely embraced dinosaur love in every way. To see the finished product and to learn more about the age of the dinosaurs though, there’s one other place in Alberta you have to visit.

About 100 miles northwest of Dinosaur Provincial Park, the small town of Drumheller is home to one of the top museums and research facilities in the world devoted to paleontology – the Royal Tyrrell Museum. Named after an early and important Alberta paleontologist, the massive facility welcomes more than 380,000 people every year who all visit for one reason – to see dinosaurs.

The Royal Tyrrell is impressive in every way. Situated in its 120,000 square feet are thousands of specimens, ranging the gamut through the entire age of dinosaurs. The museum is well organized and guests wander through each gallery, learning about the different time periods and seeing how life on Earth evolved over time. There’s plenty to awe everyone and the first specimen sets the tone for the rest of the visit. Walking into the exhibit space I felt my breath stop for a moment as a massive T. Rex loomed in front of me. Named “Black Beauty” thanks to its rare darkened bones tinted by manganese during fossilization, “Black Beauty” is one of only two T. Rex specimens ever discovered in Alberta. The fantastic displays don’t stop there though.

It seems like the museum has everything from the smallest of carnivorous beasts to massive, marine animals amazingly intact. The interpretation is second to none and I smiled as kids ran around from one exhibit to the next, playing with interactive displays and learning in spite of themselves. Even an adult like me easily enjoyed the experience and I picked up a lot of information as I slowly walked through the incredible learning center.

It’s not all displays and dusty bones though, the Royal Tyrrell also has a variety of enrichment programs available; some free and some offered at a nominal cost. Since I had some free time, I decided to join the fossil hunting “Dinosite!” hike.

Wandering out into the Badlands next to the museum, the guide led us through the scraggly scrub, absentmindedly naming plants as she went. After a few minutes we arrived in an old quarry, obviously a well used spot by humans and animals alike. A small skull showed that the local coyotes used the spot to eat a late night dinner. It wasn’t new bones we were after though, it was the oldest – fossils. First we had to be trained, and the guide patiently showed us examples of different things we might find, from petrified wood to rocks and yes, even real fossils. We were then left to our own devices to search the local hills and rocks and see what we could find.

At first it didn’t look like much; just a smattering of small rocks and pebbles strewn about. Then I started to look closer and I realized that those rocks might not be as boring as I first thought. After a lot of sifting and brushing I amassed a collection that I thought had potential. Sadly, I’m not a great paleontologist but I was thrilled when the guide said I had indeed found some petrified wood and yes, even a small fossil. It was exhilarating and I at once understood the thrill scientists who work in the field must enjoy but I also began to appreciate the incredible work required to get to that point. The patience needed is at a level that I sadly don’t possess, which only further heightened my appreciation for these intrepid paleontologists.

Alberta has a lot to offer visitors, but if it’s dinosaurs you’re after then there is perhaps no better place on the planet to live out your adolescent dreams and become a real paleontologist, if only for a few days.

1 thought on “Tracking Dinosaurs in Alberta”