While finding adventure travel options in Alberta didn’t surprise me, I was surprised to hear that some of the best in the province and arguably all of Canada are found not in some rural outpost, but right in the city itself – Calgary. When I was then told that those experiences were on some of the sites used in the 1988 Winter Olympics, I was in geeky heaven and couldn’t wait to experience a fun day out at WinSport Calgary.

Unlike almost every other city who has hosted the Olympics, Calgary didn’t lose money on the Games – it made money. The powers that be rightly reinvested this money and in the process also achieved a feat that few other host cities have been able to successfully replicate. They salvaged many of the sites used in the Games and today, more than 25 years after the Olympiad those venues are still in use by athletes, tourists and adventure sports fans like myself.

WinSport, or the Winter Sport Institute, is located at Canada Olympic Park, about 15 minutes from downtown Calgary. There are a variety of experiences you can enjoy, and locals benefit from all kinds of options from summer camps for kids to some of the best mountain biking trails in the country. For tourists like me though, two experiences are the chief draw and the reason I stopped by on a beautiful late summer’s afternoon – the zipline and summer bobsleigh. 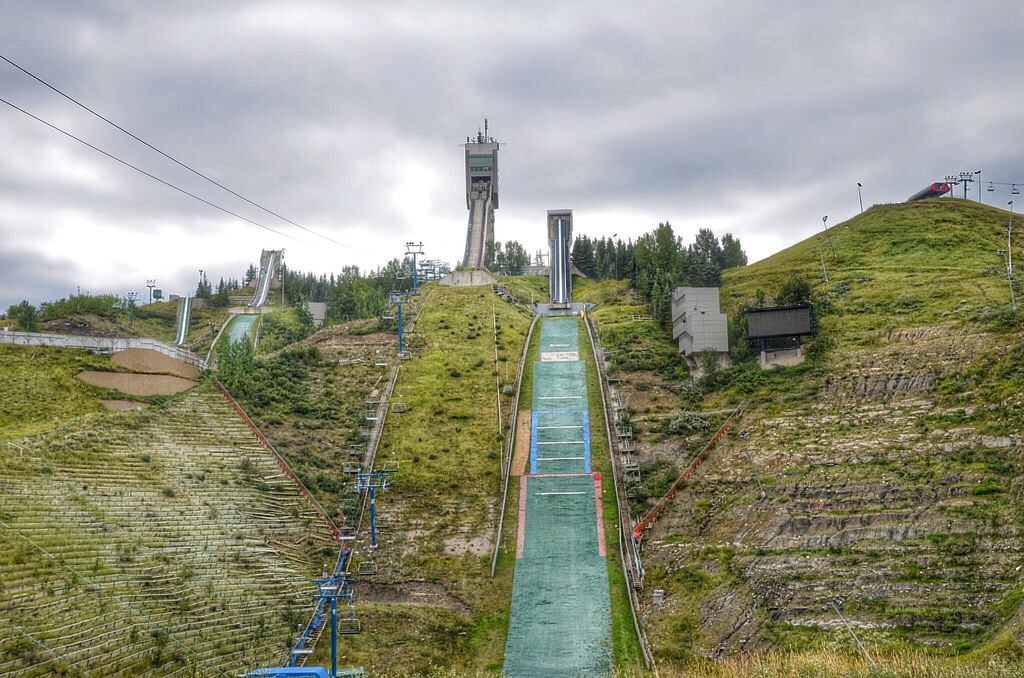 Now, I’ve done ziplines all around the world and while they’re nice, they’ve stopped impressing me. I don’t mean to sound like a jaded traveler, but it’s true. The one caveat to this is when they’re extreme – like the longest zipline in Europe I tried out in Wales earlier this year. Fortunately, the zipline at Canada Olympic Park includes three features that immediately got my heart racing: 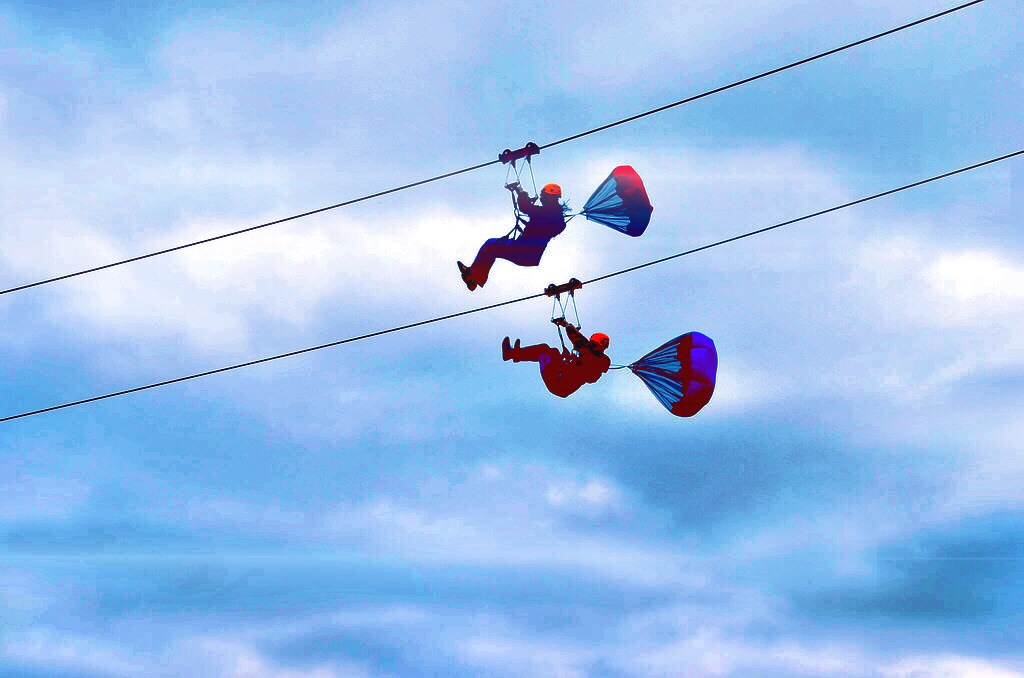 These colds facts and figures don’t do the experience justice though. Taking the elevator up to the top of the Olympic ski jump, one starts to appreciate just how high up 90 meters really is. For non-metric folks like myself, that’s nearly 300 feet; a damned high start for any zipline, much less one I was about to fly down. If you’re a regular reader, then you know that I have a love-hate relationship with heights. Sometimes they bother me and sometimes they don’t. For whatever reason though, I was fine with the big zip at the Park. Speeds can be so intense that they now include a parachute so that riders slow down prior to reaching the finish line and that, maybe more than anything else, quieted my nerves. Instead of scared though, I was excited as I gave the thumbs up and started to race down the hill.

It was just as exciting as this short video shows, but it was nothing like the next experience on my schedule – the summer bobsleigh.

Just like the ski jump, the bobsleigh track is the same one used in the Olympic Games and, incidentally, the same one where the famous Jamaican bobsled team took to the ice and where the cult classic Cool Runnings was filmed. That was more than enough to get me excited in all honesty, then I saw the first team fly down the track.

The sled is mounted on wheels and at the helm are top athletes, many of whom have competed in the Olympics, who expertly navigate the 14 turns of the course. This was the real deal and I realized how unique an experience it was as I climbed into the bobsleigh and got ready for the ride of a lifetime. There’s honestly no other way to feel the thrill and speed that bobsleigh athletes get to experience except by joining this activity at WinSport Canada – one of the few trackes open to tourists around the world. 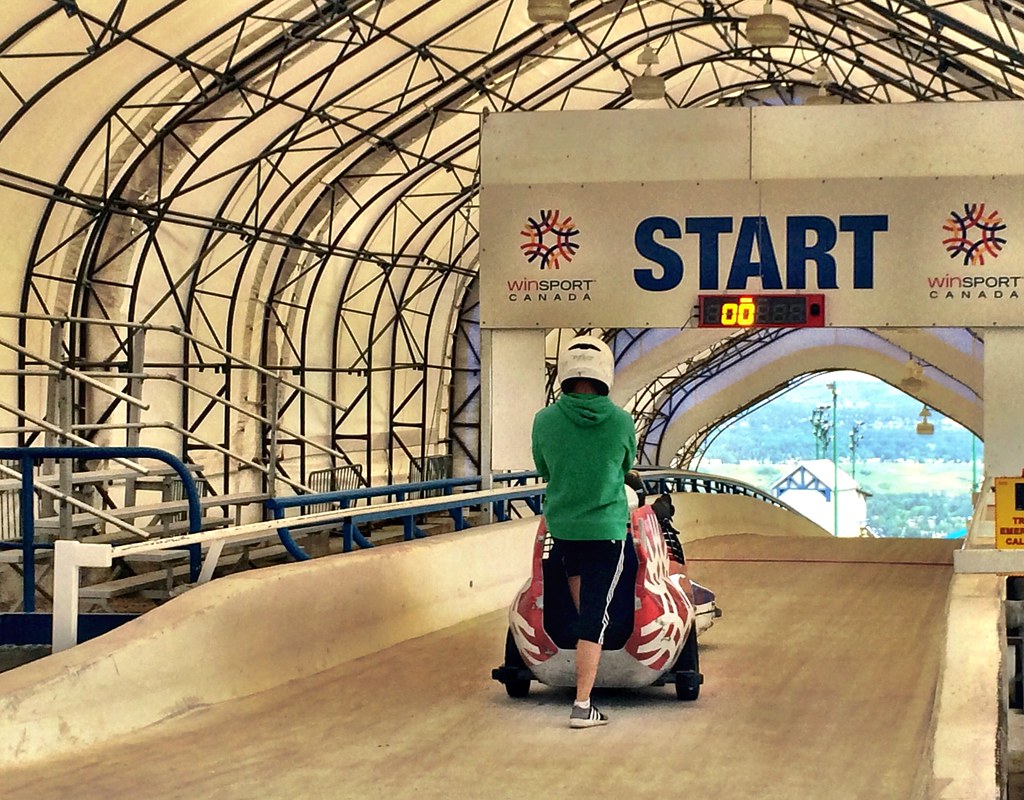 I did a good job of keeping my head up at first, but quickly the 4G forces and speeds in excess of 60 miles per hour took over and it was all I could do to peer out of the shell. I can’t even imagine the physical strength and mental acuity needed to actually pilot the bobsleigh, it was all I could do to just be a passenger. At the end of the ride the four of us for whom this was a first time experience jumped out of the sled and slapped each other on the backs, hooting and hollering. We were all strangers, but the adrenaline immediately started to pulse and the uniqueness of the activity instantly bonded us together.

Video of my bobsleigh run, including the point halfway when I had to tuck my head in. Sorry about that.

Spending the day at the Park is a lot of fun, and I really didn’t even experience all there is to do there. There are plenty more outdoor activities and Canada’s Sport Hall of Fame is worth a visit in its own right. Even if you don’t consider yourself a typical adventure traveler, the experiences at WinSport are so accessible and so well managed that in all honesty, just about anyone can join in and experience the thrill of what it must be like to be an Olympic athlete; if only for a few hours.

Where are your favorite adventure travel activities?