On my first trip to Croatia last year I was pleasantly surprised to discover food that went above and beyond my expectations. The culinary side to traveling in Croatia is more important than I ever realized and that first exposure taught me that Croatian cuisine is misunderstood and severely under-appreciated. On my second trip a few weeks ago, the foodie side of the country once again played a prominent role and this time I followed my taste buds and found that Croatians have a sweet tooth, a fairly robust one, at least if their desserts of choice are any indication. I’m happy to report that I ate a lot of fantastic sweets and delicious desserts during my week in Croatia, but the ones I’ve listed here weren’t just my favorite, they’re a few that Croatia does exceptionally well.

1. Cream Cake – While you can find the traditional kremšnita or cream cake throughout Croatia, two of the most famous variants of this homey cake can be found in Zagreb and the nearby town of Samobor. It was while visiting the later that I stopped by Livadić, a hotel and restaurant famous for the fresh cream cakes they make from scratch every day. The Samoborska kremšnita is known for having a puff pastry top, predominantly custard cream filling (less whipped cream) and is finished with powdered sugar. Served up in huge helpings along with a coffee, it’s a perfect mid-afternoon snack or the dessert of choice for special occasions and holidays. So how does it taste? The massive size is at first daunting, but the light filling makes the cake easy to eat and not too heavy. Perfect actually for a nice coffee break with friends.

2. Sour Cherry Strudel – While many visitors to Croatia’s beautiful coastal regions immediately see the strong Italian influence in Croatian cuisine, the distinct culinary traditions inland are sometimes ignored. The sour cherry strudel is one of these authentically Croatian dishes that many people miss. Cherries are an important fruit in Croatia, in fact what we know as Maraschino cherry originated from how cherries are treated in Croatia, the local variant though is the Marasca cherry. Used in everything from liqueurs to desserts, cherries can be found when in season sold by the bushel in markets around the country. In Croatia one of the most popular cherry based deserts is the strudel, which I was lucky enough to see made while eating at a restaurant in the heart of the Plešivica wine region. Making this tasty pastry is an art form, passed from one generation to the next and the result is tarty perfection. You’ll find it served in a lot of restaurants, but be sure to visit eateries like Karlo for the freshly made version. 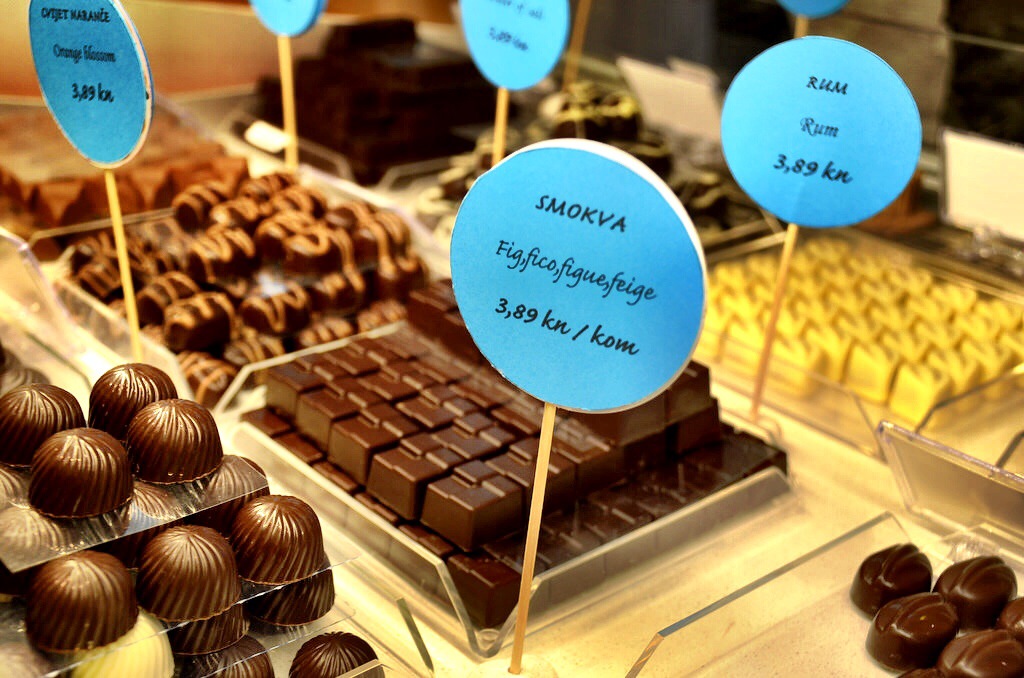 3. Chocolate – While Croatia certainly isn’t alone in its love affair with chocolate, they are doing some pretty interesting and innovative things with the sweet treat in small chocolate shops around the country. I found one in the old city of Zadar, one of my favorite cities, and was entranced by the chocolate work on display. Chocolate master Dubravko Vitlov first realized he wanted to be a chocolatier 20 years ago while watching a demonstration in Vancouver, Canada. He took classes in his spare time and at night worked on his craft while his family slept. The result is the top chocolate shop in Zadar and one of the best in Croatia, Vitlov Chocolate. Famous for his Maraschino Pralines using the region’s favorite liqueur, the great master is constantly innovating by introducing flavors like orange blossom and red wine; flavors that reflect the country and its amazing foods. I had the chance to watch Mr. Vitlov demonstrate how he makes the chocolates and the nuance and artistry was amazing. I always knew intellectually that chocolate making was equal part art and science, but seeing it in person is an entirely different experience. And of course the best part is the tasting and everything, from his chocolate barks to the famous pralines are amazing – honestly some of the best I’ve had.

4. Fritule – It seems that most Western cultures have a variation on fried sweet dough, from doughnuts and beignets to churros and waffles. In Croatia the form it takes is the fritule. Not unlike a zeppole, this small fried dough ball is made fresh and topped with your favorite add-on; I chose the Nutella of course. Also not unlike its culinary cousins, the fritule is commonly found at night markets and fairs, a fun food for both kids and adults. I love strolling around these evening fairs, decadent snack in hand and soaking up the culture. I found these in Split, a coastal city that seems tailor made for just such evening promenades, augmented by this delicious dessert.

5. Coffee culture – Croatia enjoys my favorite aspect of European life, cafe culture. There is absolutely nothing better than enjoying a coffee, meal or glass of wine outside, under a big umbrella while talking with friends. Like their Italian neighbors, Croatians aren’t in any hurry when they sit down to chat and a simple espresso can easily turn into an hour-long conversation. They also take their coffee very seriously, and finding the right cup is a thing of pride for most locals. Espresso-based coffees are the most popular and are ubiquitous, a small cup easy to find no matter where you are. My favorite moments in Croatia all seemed to center around enjoying a hot beverage with friends at an outdoor café, talking and just watching the world walk by.

6. Gelato – I’ve had Croatians criticize me before for highlighting the fact that a lot of their cuisine has a distinct Italian influence, but I’m prepared for more flak. The truth is that huge swaths of what is modern Croatia was under Italian rule for centuries. This necessarily impacted the culture, especially the food traditions. You’ll find it reflected up and down Dalmatia especially, from the Pag cheese risotto to the homemade gnocchi and of course the gelato. Not all gelatos are made the same; in fact many in popular tourist areas are fake gelatos, labeled as such so they can charge more. In downtown Dubrovnik though I found the real deal and a gelato shop that specializes in local flavors. Although it looks like another tourist hotspot, locals know Dolce Vita in the Old Town to be one of the best places in town for yummy gelato. Easy to find just off the Stradun, the place was packed when I showed up on a steamy evening. Immediately I was drawn to the bitter orange flavor, using the local candied orange peels called arancini. One of my favorite snacks, arancini are even better in gelato form and when combined with a scoop of chocolate, gelato perfection was reached.

What are some other Croatian desserts you think should be highlighted?