It’s hard to believe that all it takes to escape the modern bustle of Hong Kong’s downtown is a short subway ride to one of the city’s out-islands. The MTR is the city’s convenient, fast and comprehensive subway system that connects practically all areas of the city, including the popular Lantau Island. One of the top day-trips for visitors to Hong Kong, I joined the masses one day and explored this beautiful island, one of the highlights of my trip to Hong Kong.

Hong Kong isn’t a singular place; it’s actually made up of Hong Kong Island, the Kowloon Peninsula, the New Territories and over 200 offshore islands, of which the largest is Lantau Island. Originally the island was home to a series of small fishing villages and while you can still find them, that’s not what attracts millions of tourists every year. 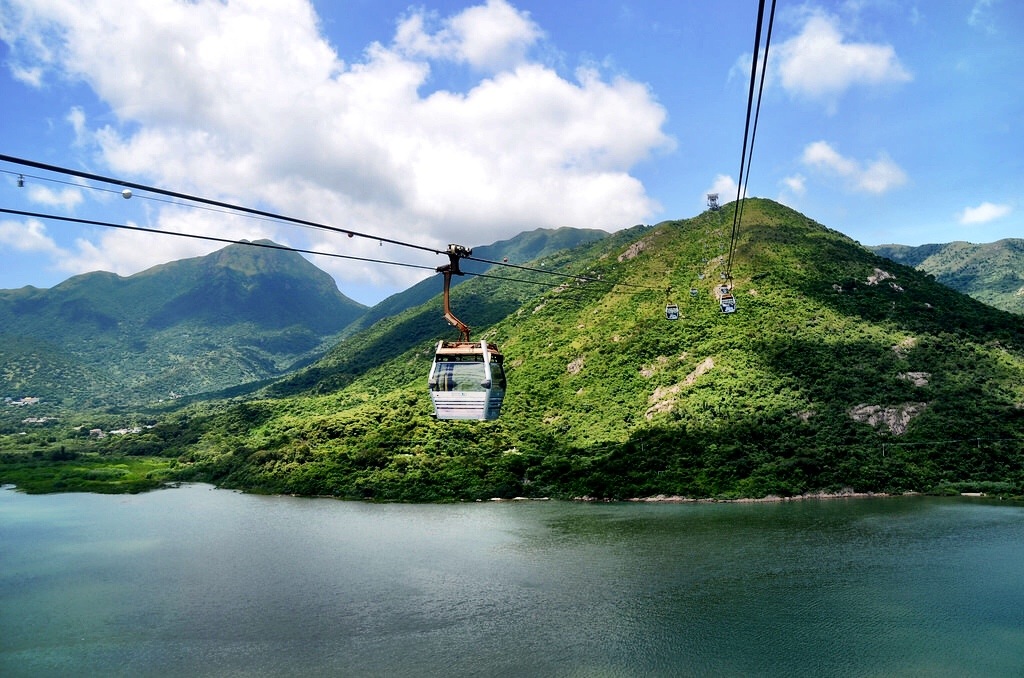 Getting to the island is honestly part of the fun. From the Tung Chung MTR station, you then buy tickets for the massive cable car system known as Ngong Ping 360. These gondolas take riders from the main station up through the hills and mountains to the heart of the island. Along the 3.5 mile route are some of the best views in town, overlooking the nearby airport, lush forests and more. You can go up in a normal cable car or elect to take the Crystal Cabin, which is made entirely out of glass (including the floor) guaranteeing the best possible views.

There is plenty to do to fill a day on Lantau, and while it may initially seem too touristy it’s easy to get away from ‘official tourist villages’ and shops and discover the true beauty of the island. At the heart of the experience is the massive Tian Tan Buddha or Big Buddha. It’s a fairly recent addition to the island, completed in 1993, but was the largest seated outdoor bronze Buddha in the world when it was built. To get to the giant Buddha, visitors must first climb the 268 steps to get there, no easy feat on a sweltering Hong Kong day. But the rewards are well worth the effort; the giant Buddha surrounded by adoring Deva statues with the fog encased mountains in the background are a spectacular sight. 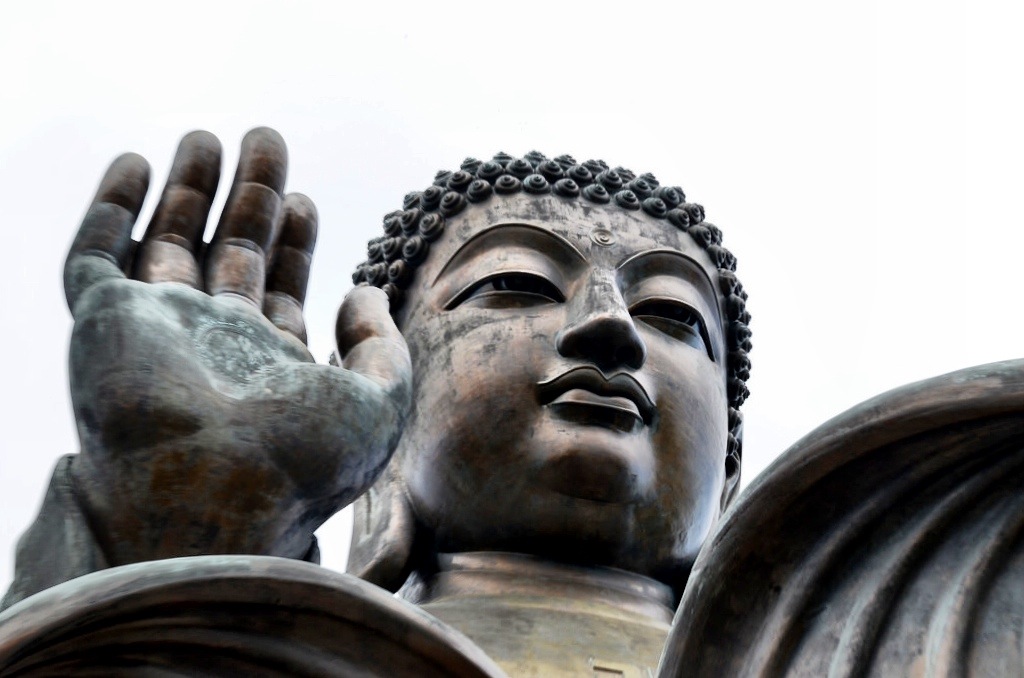 I looked down from the terrace where the Buddha sits and saw another large complex, one that is tied to the Buddha statue as it turns out, the Po Lin Monastery. The monastery, along with the Giant Buddha, is a major center for Buddhism in Hong Kong and just as many come to pray as do to take selfies with the Buddha. While the monastery is beautiful, it’s best known perhaps for its vegetarian restaurant, a must visit establishment if you love veggies. (obviously I skipped the restaurant)

Looking at statues and altars is fine, but to really get a feeling of peace and serenity don’t skip the walk through the forest known as the Wisdom Path. As I started down the pastoral walk I thought not for the first or last time how close I was to Hong Kong’s city center. The forest buzzed with life as butterflies flitted about and not a modern sound could be heard. I also realized why the island is so popular amongst locals; to escape from urbanity for an afternoon is a rare and special treat. Set in the rolling hills, the sea within sight, the Wisdom Path accentuates this feeling of retreat and reflection. The Path traces a series of 38 wooden stakes containing verses from the centuries-old Heart Sutra; one of the world’s best-known prayers revered by Confucians, Buddhists and Taoists alike. Arranged in the shape of an infinity symbol, I didn’t have to be able to read the Chinese letters to understand their importance, reflected on the faces of other visitors around me. No one spoke a word as they completed the circuit, taking the messages to heart and leaving more spiritually complete than when they arrived. 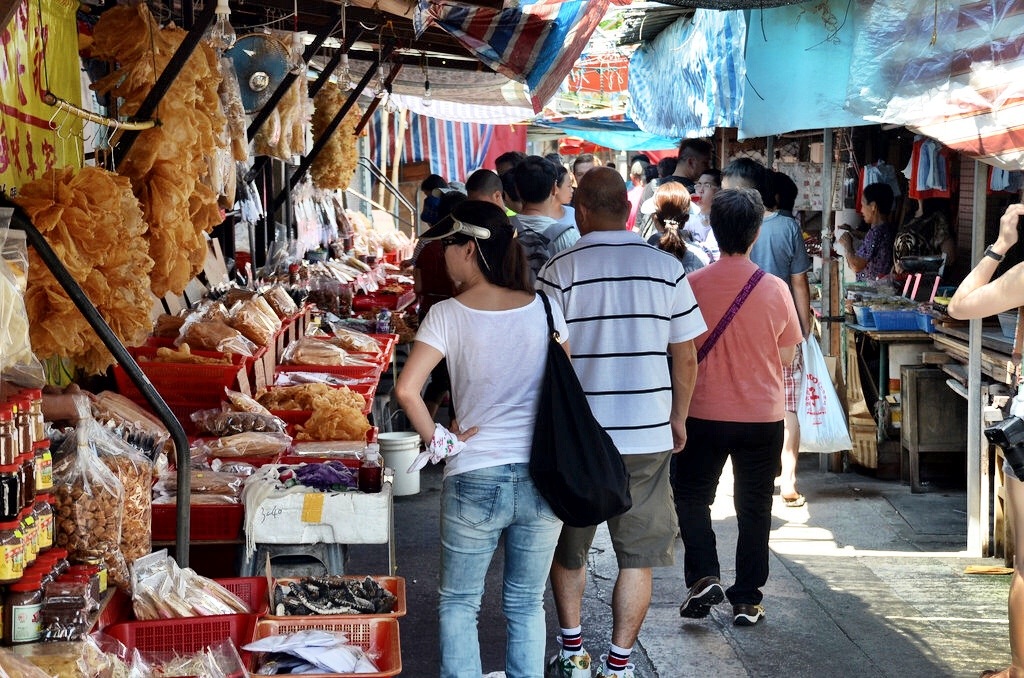 The island isn’t all about Buddhism though, it was originally an island of fishermen and it’s still possible to see this way of life today. Either take the bus or one of the rare 50 taxis on the island to Tai O, a centuries old fishing village where little seems to have changed. I arrived on the day of the yearly Dragon Boat Races, a festive and important event that was reflected in the bright flags flapping in the wind, each spurring on a favorite team. Even without the holiday, I quickly understood the appeal of the village. Sitting on stilts above the water, huts, shops and homes balance precariously while in the narrow alleys stands selling everything from freshly caught squid to trinkets of all shapes and sizes were on display.

It was chaotic, reminding me of markets in Thailand or Laos, with the same exciting hustle and bustle that I love to experience. The smells weren’t my favorite, mostly fish and seafood, but I appreciated the freshness of the food and those who love seafood will enjoy a great impromptu lunch or snack at a local stand. What I did find to eat though was what was called a Tai O donut, fried egg dough rounded off with some powdered sugar. The snack was a little sweet by Asian dessert standards, but perfect for my Western palate.

You can make a day trip to Lantau Island as active as you want, there are plenty of activities that appeal to everyone from solo travelers to families without leaving anyone bored. More importantly, I loved visiting the island because it gave me a different perspective of Hong Kong. So many people visit and only see the downtown core, they only see the crazed urbanity for which it is so well known. But that’s not the whole story of Hong Kong, you have to visit the more serene and decidedly quieter parts of town to understand the totality of the city, not just how it works, but how it relaxes as well.

Have you been to Lantau Island? What was your favorite part?