I’ve written many times about being a picky eater, but I don’t as often talk about my overall culinary preferences. While I do love certain luxuries when I travel, from business class seats on planes to 5-star hotels, these tastes do not extend to food. If anything, I eschew fancy, super high-end meals in favor of more local and homey dishes. It’s just who I am and I’m good with that. That also means that I eat a lot of street food and on a recent trip to Berlin I found a new dish that I promptly inducted into my personal Hall of Fame – currywurst.

In case you’re not initiated, like most great street food currywurst is deceptively simple and borne of pure necessity. The clinical definition of currywurst is: a German fast food dish consisting of steamed, then fried pork sausage cut into slices and seasoned with curry ketchup. Fries are many times included. Its history though is a lot more interesting than this boring description. 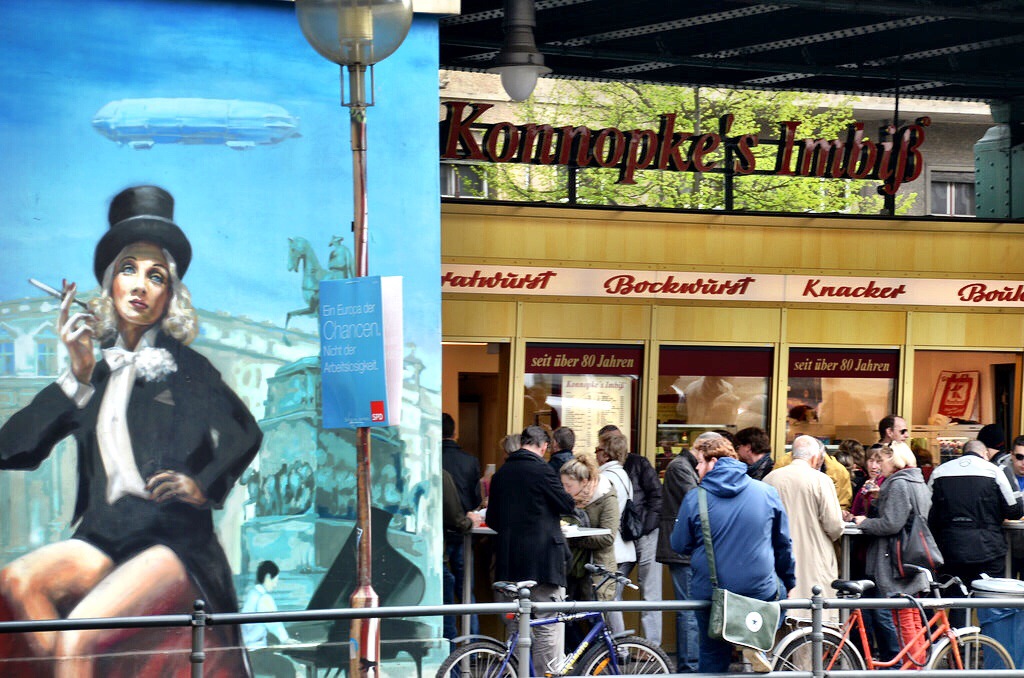 Like most popular foods, the origin of the currywurst is somewhat in dispute, but many people attribute its creation to Herta Heuwer. Post-WWII Berlin was a tough place; most people didn’t have a lot of money and many food staples were in short supply. In 1949, Herta procured some ketchup, Worcestershire sauce and curry powder from British soldiers, mixed them together with a few other spices and poured this concoction over sausages. Just like that, the currywurst was born. She started selling this inexpensive but filling meal at a street stand and it took off. At its peak, Herta sold more than 10,000 orders every week. Soon her invention was copied and a food pop culture icon was born.

I first heard about this saucy concoction a few years ago and a visit to the famous Konnopke´s Imbiss in Berlin’s Prenzlauer Berg neighborhood was high on my list. Standing in line with a mix of locals and tourists, I was excited – honestly excited to try currywurst for myself. I’m not sure if I should be proud or ashamed, but that was my honest reaction. Finally though the moment of truth came when I, along with several friends, finally had our own plates of currywurst in front of us, served with a humorously petite fork for the hearty portion. 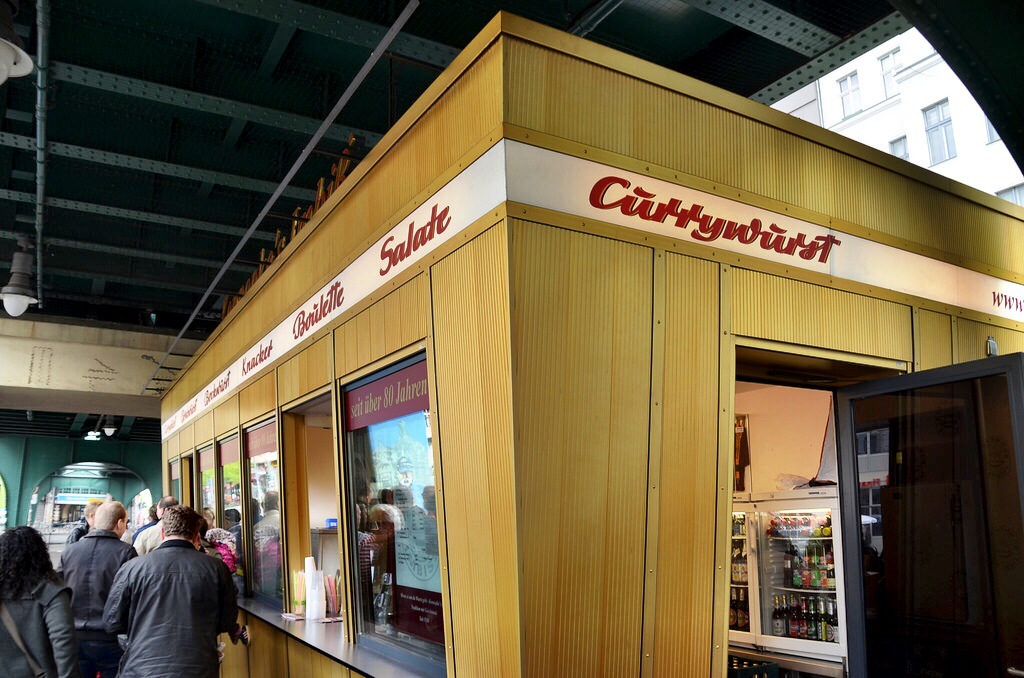 Now you should know that there are several different kinds of currywurst, so all I can write about is the specific kind that Konnopke´s Imbiss serves, but simply said I loved it. It was tasty with a spiciness that was more for flavor than heat, which I appreciated. The layering of fries and sauces along with the sausage of course meant it was a hearty dish, the hallmark of well-done street food in my honest opinion. I finished off the portion within just a few minutes, content with a smile as large as a Cheshire cat.

Many of my friends who either live in Berlin or who have spent a lot of time there make fun of me for this newfound culinary love affair, and that’s fine. That’s the beauty of travel and food, it’s extremely personal and frankly there is no wrong answer. It’s fine that some people prefer to spend a few hundred dollars on dinner. Not me; no, give me an order of currywurst and a Diet Coke any day of the week. 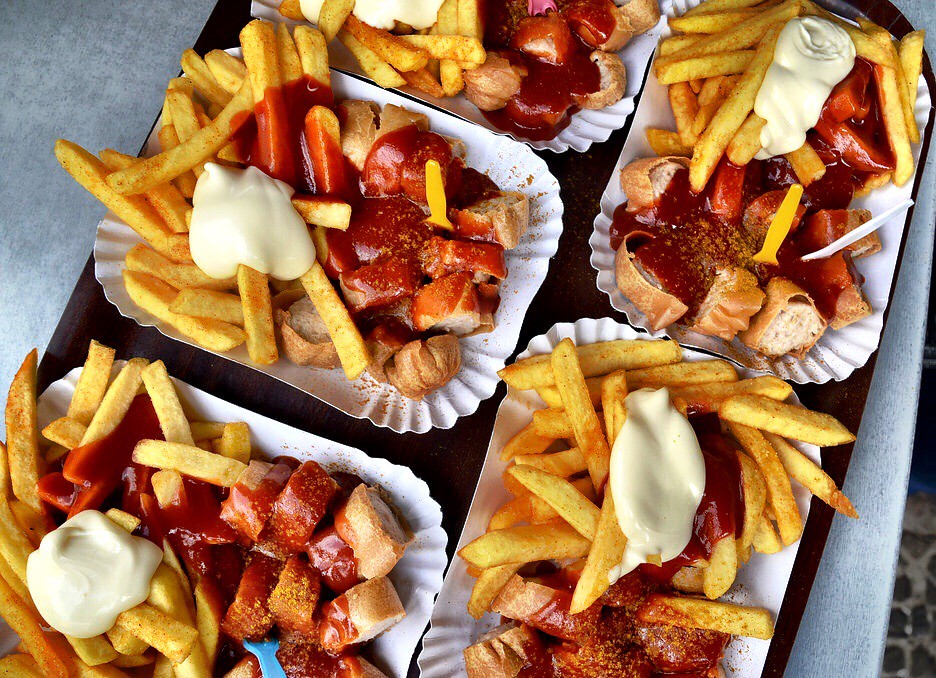 I was intrigued about the popular snack though and decided to learn more about it. That prompted a visit several days later to a fantastically unique museum – the Currywurst Museum. No longer feeling like an outcast for my appreciation of a true Berlin meal, I learned more about the history of this important food and why it’s just that, an important food. Again, just like so many other humble meals around the world, currywurst has an important place in the history of the divided city and today is a proud standard bearer of popular culture in Berlin, whether anyone likes it or not. The same has happened with poutine in Canada, bunnychow in South Africa, fish and chips in the UK and even pho in Vietnam. These now somewhat elevated meals today were created with a purpose – to quickly give sustenance to the working poor, people who needed a decent bite on a budget. Sure, today these meals have been discovered by the outside world, turned into tourist attractions and even reinterpreted in some of the best restaurants in the world. But that shouldn’t distract us from their original and intrinsic value; they are just that important.

Now that I’ve made you feel guilty for not liking currywurst, I encourage you to keep an open mind not about the fanciest of foods when you travel, but the simplest. Don’t walk by food carts or small booths thinking that you are above them. Because in so doing you are usually robbing yourself of one of the most important aspects of the cultural immersion that travel gives us – through the stomach.