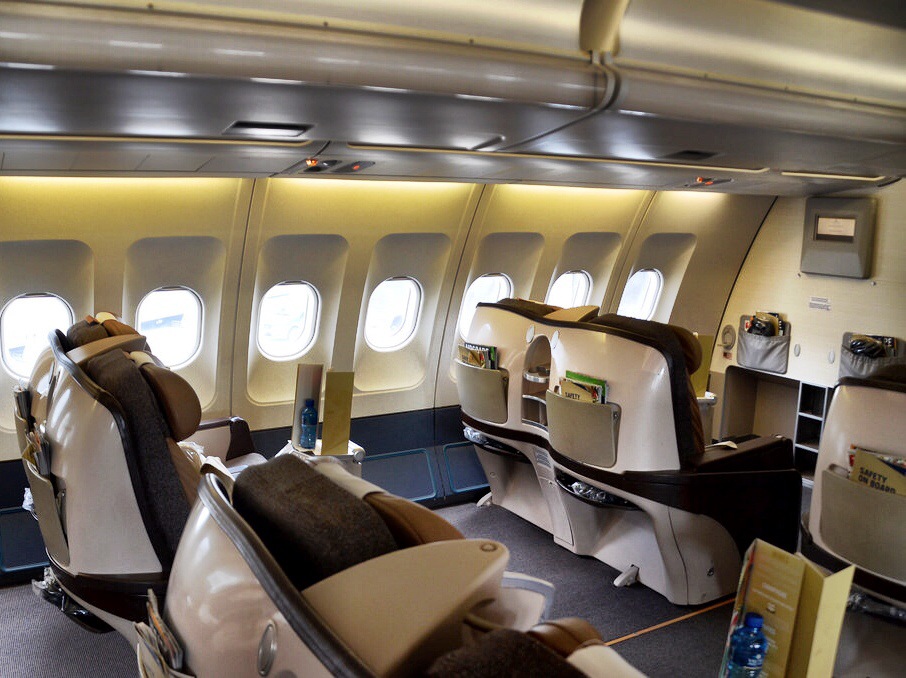 I’ve been to South Africa three times in as many years, each time flying on South African Airways. Last year I took a few moments to review their Economy Class product, which I still think is one of the best in the world. On my most recent trip though I was lucky enough to be upgraded on my flight to South Africa, enjoying their Business Class product for the first time. I had long looked forward to that experience and I’m thrilled the share the good, bad and not-so ugly of the trip.

It’s probably safe to say that the Washington, DC – Johannesburg route is not SAA’s most popular. That was my first thought at least as I climbed onboard the Airbus A340-300 and found my seat. I thought that because at first glance the Business Class product seemed really dated. I can’t tell you what aspect of the chair exactly seemed older, it was just a general feeling and one that the person next to me echoed as well. These initial misgivings were instantly erased though when I realized that the seat was the Holy Grail for Business Class flyers – a fully lie-flat seat. Instead of the standard midway recline I’ve seen in far too many business class sections, the SAA product had all the bells and whistles, including a massage function that at one point kept me occupied for at least 30 minutes. 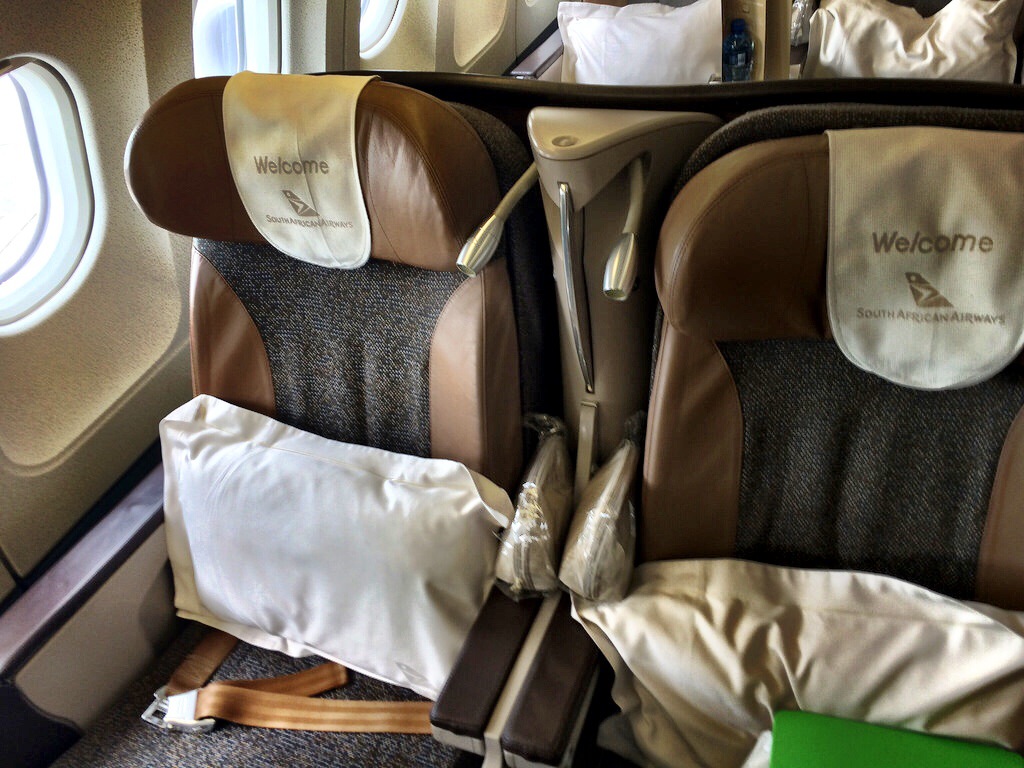 The seat was a winner, but so were the other perks meant to increase my comfort on the 17-hour flight via Dakar. Noise cancelling headphones and a decent amenity kit with products by Temple Spa rounded out the experience. Sitting there with my feet raised, I was truly and honestly comfortable for the duration of the flight and while I had some initial misgivings about the age of the section, it’s obvious that SAA has done everything they can to minimize the typical issues that aging aircraft can present.

For the Avgeeks out there, the forward-facing flat beds (in a 2-2-2 configuration) feature in-set power and are 21” wide with a 73″ seat pitch and come with a comfortable overnight mattress, duvet and full size pillow.

I’ve said it before and I’ll say it again here, a major pet peeve of mine is when airlines try to be too gourmet in the air. Fussy food is not what anyone wants when traveling for 17 hours. At the very least have two menus, one for the gourmands and one for everyone else. Ok, rant over. All of that being said, the food was for the most part very good in the SAA Business Class section.

Given the length of the flight we were offered three meals, dinner, breakfast and lunch. The dinner menu featured items such as: olive oil poached Hamachi, grilled cowboy rib eye steak and a Vidalia onion tart to just name a few. Breakfast was thankfully light and I rejoiced in having made the right decision with the delicious sugar plum frangipane pancake. Lunch once again featured a different and robust menu with options including stewed lamb, grilled chicken and vegetable lasagna. The meals came with cheese plates and dessert and full beverage service of course. While I didn’t imbibe, SAA honors its heritage and some amazing looking South African wines were always a service button call away.

So the food was good, if not a little fussy, but I was disappointed that they didn’t have a snack bar open for the duration of the flight. Most times when I’ve flown long haul in Business Class, the airlines make available a snack bar with drinks and small nibbles for those long stretches of time when a meal service isn’t being prepared. I searched and maybe I missed it, but as far as I know there was not a snack/beverage bar, something simple that should be changed right away.

Entertainment, Service and THE SLEEP

I think that at this point most long-haul carriers have caught up with each other and SAA proved that rule with an easy to use, touchscreen in-flight entertainment package that featured a robust assemblage of movies and TV shows. Personally, I wish there had been more new releases and TV series, but on the whole that’s a very minor criticism. The service was augmented by over-ear noise cancelling headphones provided by the airline, an always welcome comfort.

Here’s where things get a little dicey and they should in no way reflect on the airline as a whole. Instead I truly do think that it is a result of a few personalities and nothing more. The DC-Johannesburg flight is direct but not non-stop. That means we stopped in Dakar, Senegal for an hour to refuel, take on new passengers and to change out the flight crew. The initial team of flight attendants working in the Business Class section from Washington to Dakar were, in all honesty, not very good. To a person they seemed cold, distant and uncaring. They forgot to bring people their meals, I never saw a dinner roll and when I asked for water I was told they’d get to it, but they never did. I know what you’re thinking, these are exceedingly minor things. And that’s true, they are. But in the world of Business Class air travel there really is no room for error, especially when it comes to something as basic as hospitality. It’s amazing the power that a simple smile will do to change the entire atmosphere of a flight. I said that I believe this to be isolated and not pervasive among SAA flight attendants and that is because it is the first time on 5 legs with SAA that I have ever experienced anything less than stellar service. And in fact the replacement crew from Dakar to Johannesburg were great and helped rescue the flight in the minds of the passengers. But it does go to show that no matter how much time and effort put into developing something as massive as a Business Class product, one or two people can ruin it for everyone.

Ok, enough about that. What everyone wants to know about, why many fly in Business Class in the first place, is for the quality of the sleep. As I mentioned at the start of this post, SAA (thankfully) features forward-facing flat beds. No angles, no ‘nearly-flat’ but straight as a board flat. Prior to my attempt at sleep, the flight attendants helped place the mattress and I snuggled under a massive and infinitely comfy duvet, hoping for at least a few hours of sleep. I am horrible at sleeping on planes, no matter how comfortable the environment. That’s why I was pleasantly surprised when I awoke, checked my watch and saw that I had slept for a record 5 hours. This simply does not happen for me on flights, no matter their length. I rubbed my bleary eyes and saw that lunch service was soon to commence. I had done it. I had slept and we were nearly at our destination and frankly, I believe that it was the quality of bed and mattress that allowed me to arrive in South Africa at least a little more rested than normal.

I have long been a fan of South African Airways and that loyalty was only augmented through my experience in their Business Class section. They understand that their flights are long and do as much as they can both as a company and individually onboard to make the experience as positive as possible. That ethos of course extends to their premium sections and while I had some nit-picky complaints, I was honestly very happy with the overall experience. Add to that access to their lounges, some of the best in the world in my opinion, and the entire flying experience, from gate to gate, is one of the most comfortable and pleasurable ways to reach the beauty of South Africa.

Have you ever flown with South African Airways? What did you think?

6 thoughts on “Journey to Africa in Style: A Look at South African Airways Business Class”