I like adventure activities; there’s just something about them while traveling that makes me feel closer connected to a destination. Whether it’s flying through the trees on a zipline or jumping off of a massive bungee, I love adrenaline pumping activities when I’m traveling. On a recent trip to Wales though I was introduced to something I’d never heard of before and even after mostly understanding what it was, couldn’t believe that it existed.

Located along the Irish Sea, the peaceful community of Anglesey is the picture of Welsh beauty. Rolling hills dotted with sheep, lonely cottages and the ever-present sea as your companion. It’s lovely and I can understand why it’s such a popular summer destination. But I wasn’t there in the summer, I was there in March, a famously moody time of year for a region already known for wet and cold weather. And unlike those people sitting peacefully on benches, I wasn’t there to admire the scenery, I was there to become a part of it. 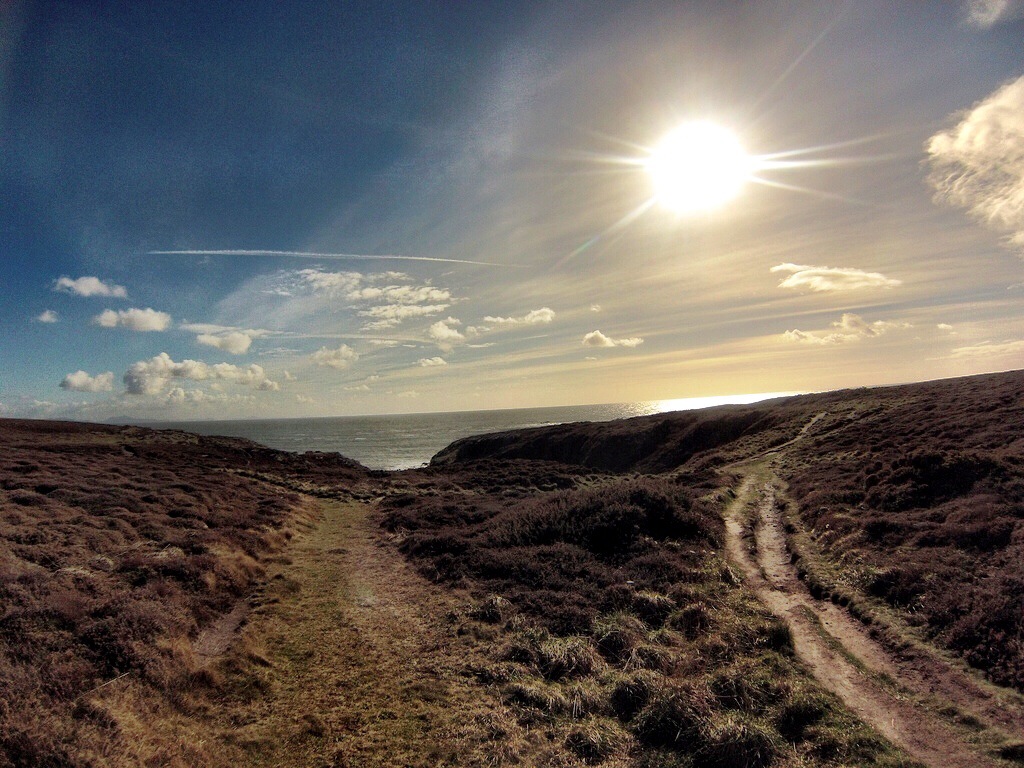 Coasteering is defined as “a physical activity that includes movement along the intertidal zone of a rocky coastline on foot or by swimming, without the aid of boats, surf boards or other craft. It can include swimming, climbing, scrambling, jumping and diving.” It actually doesn’t sound like a bad activity if it’s the height of summer when a dip into the cool sea sounds lovely. As I said though it was March, the water was 45 degrees Fahrenheit and I had two wet suits on as I walked down the hill towards the sea wondering not for the first time what I had exactly gotten myself into.

It really was a beautiful day and the threats of rain were a distant memory. The group sat awkwardly on a hill, made into life sized Gumby dolls thanks to the precautions that would help us battle the elements. I was nervous not because of fear but because even at that stage I really didn’t have a great idea of what exactly coasteering was. But as with most things in life, doing something is the best way to understand it and so it was armed with that knowledge that I followed the group as we climbed down the rocky slope. 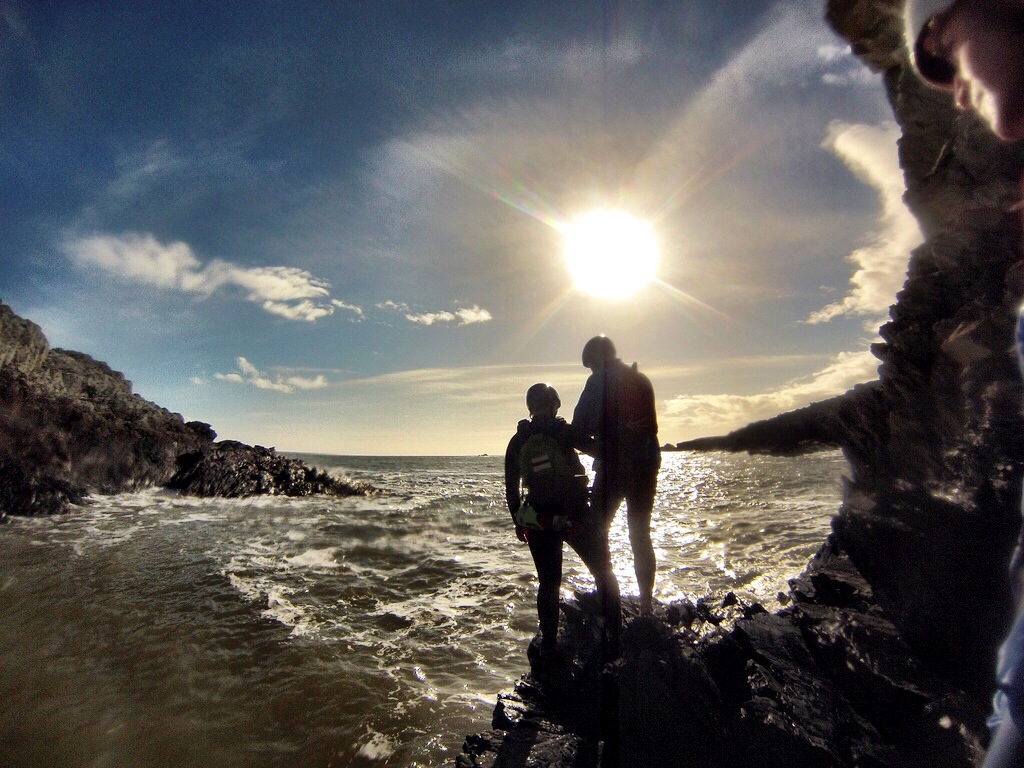 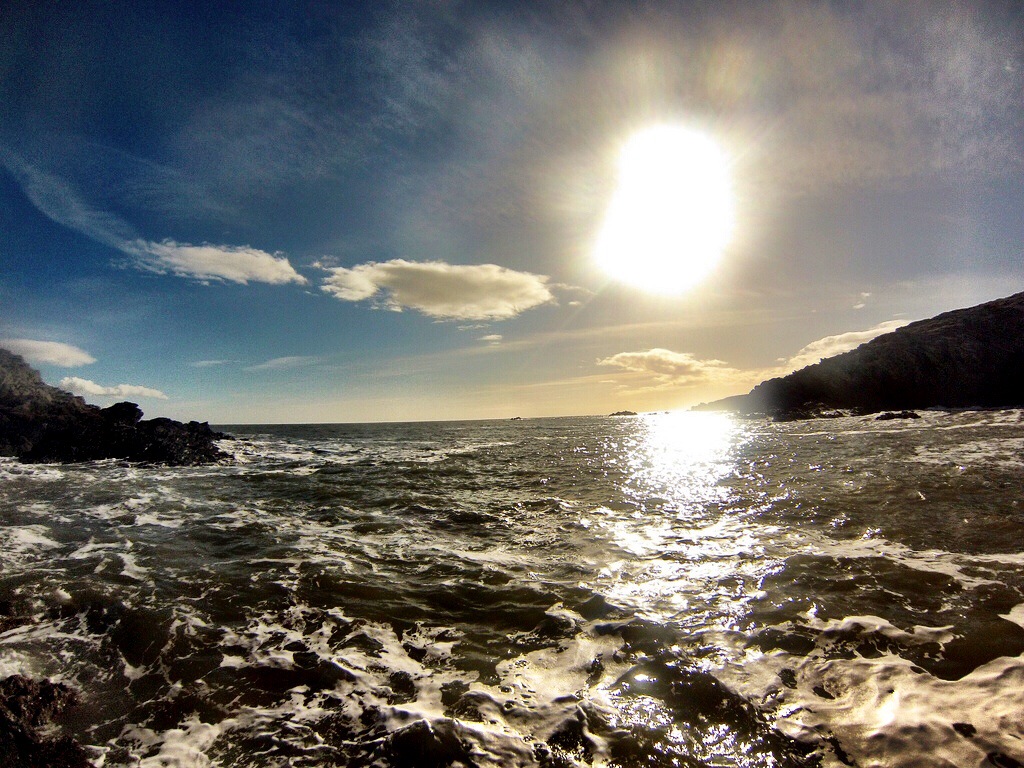 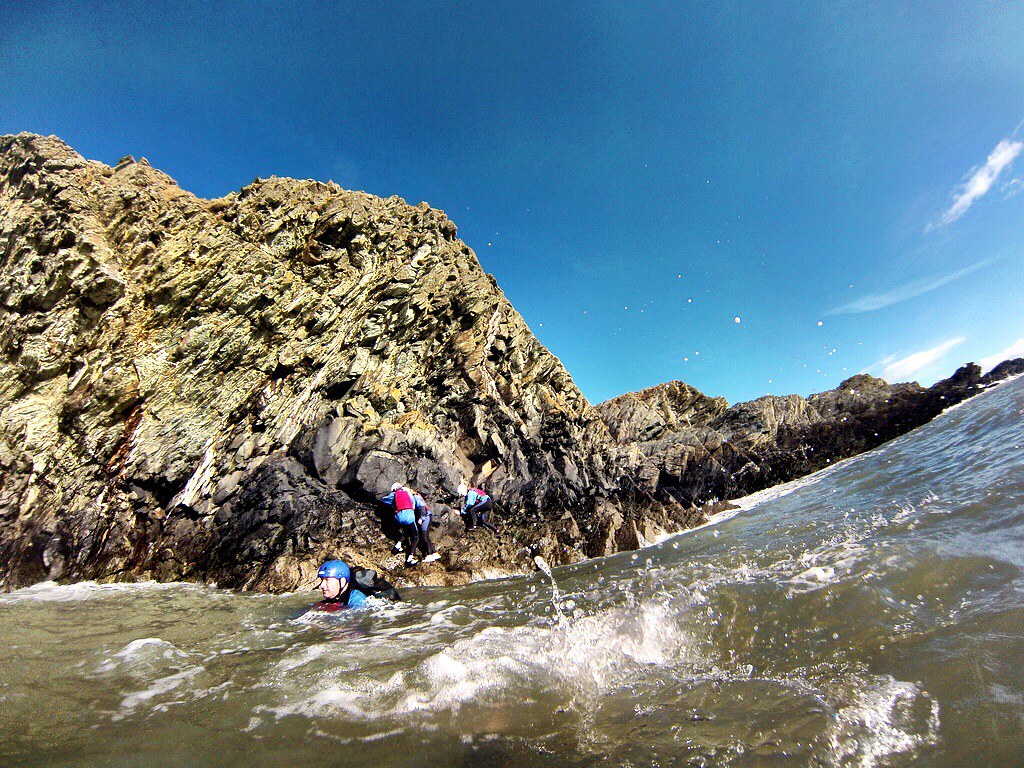 We soon met the edge of the water, the waves causing a chill whenever they met my exposed skin. It felt cold, damn cold and it was the knowledge of what cold water does to the body that had me a little worried. Cold water can be brutal, causing a gasp reflect in people that many times claims lives instantly. If one survives the initial plunge, then it’s the speed with which frigid temperatures rob the body of energy until, usually after only a few minutes, people are literally too tired to move. That’s extreme though, and I was in a guided group wearing two wet suits. But even with those two suits, the freezing water was still a shock as I dove in.

I felt a lot of emotions simultaneously as I bobbed in the Irish Sea. I felt exhilarated that I had done it and was in the freezing waters, swimming along to the next stop on the coasteering course. Then the biting cold began to hurt, literally hurt my partially exposed feet and I got a little worried. I soon reached the opposing cliff face and pulled myself up, happily leaving the grasp of the uncaring sea.

We then as a group walked along the rocky coast, sometimes delving back into the waters and a few times even diving. It was fun, it was different, but it was also exhausting. I had a lot of layers of clothes on and the amount of energy that the sea stole was extraordinary. Finally our guide signaled to us that we had reached our last stop, but not before a several hundred-meter swim to shore.

I wasn’t sure if I could do it. At one point I felt totally overwhelmed and wanted to do nothing more than just rest. I knew though that if I gave in then I’d never make it to shore, so it was with every ounce of energy and determination that I fought the waves and eventually, albeit very slowly, reached shore. 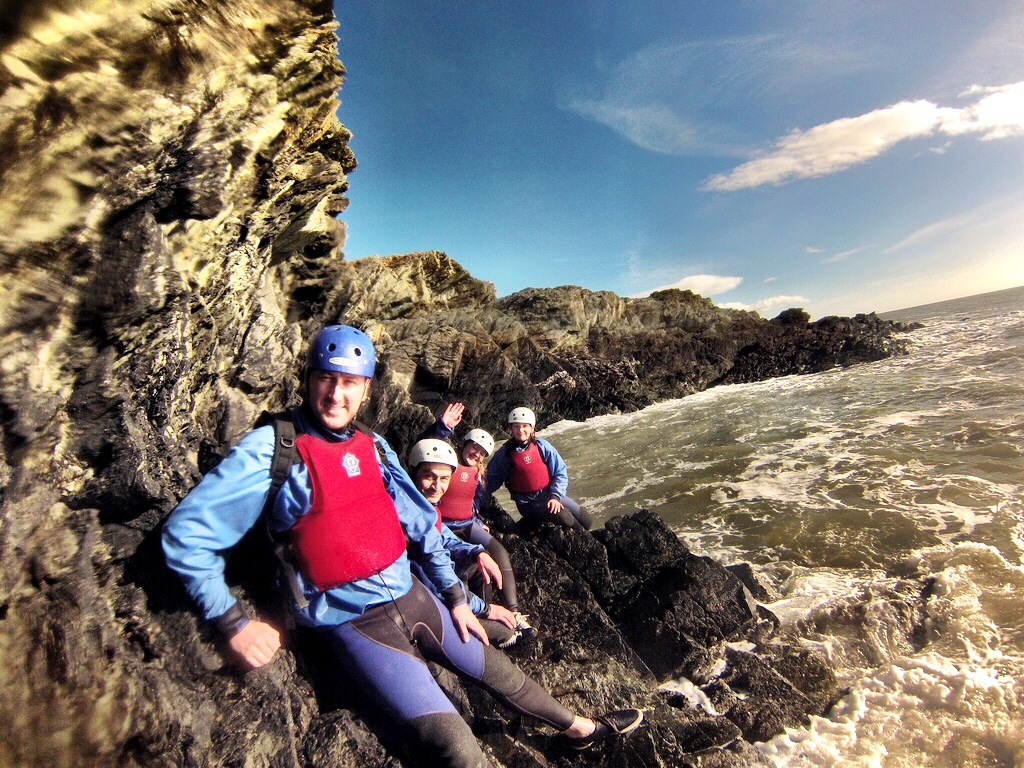 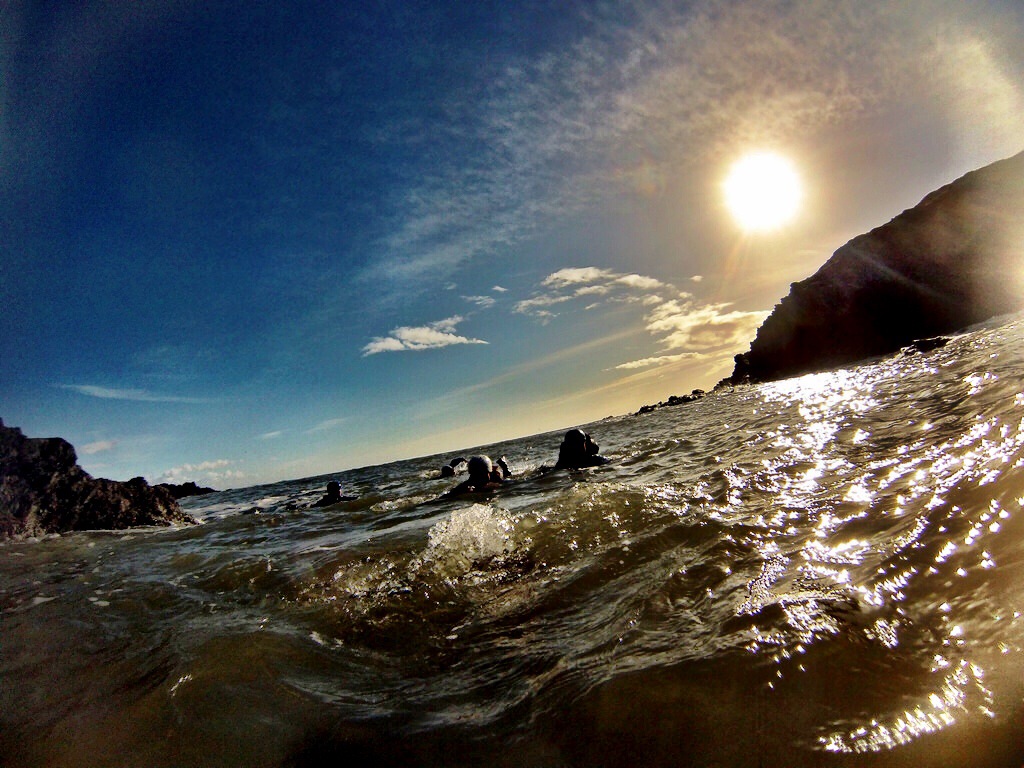 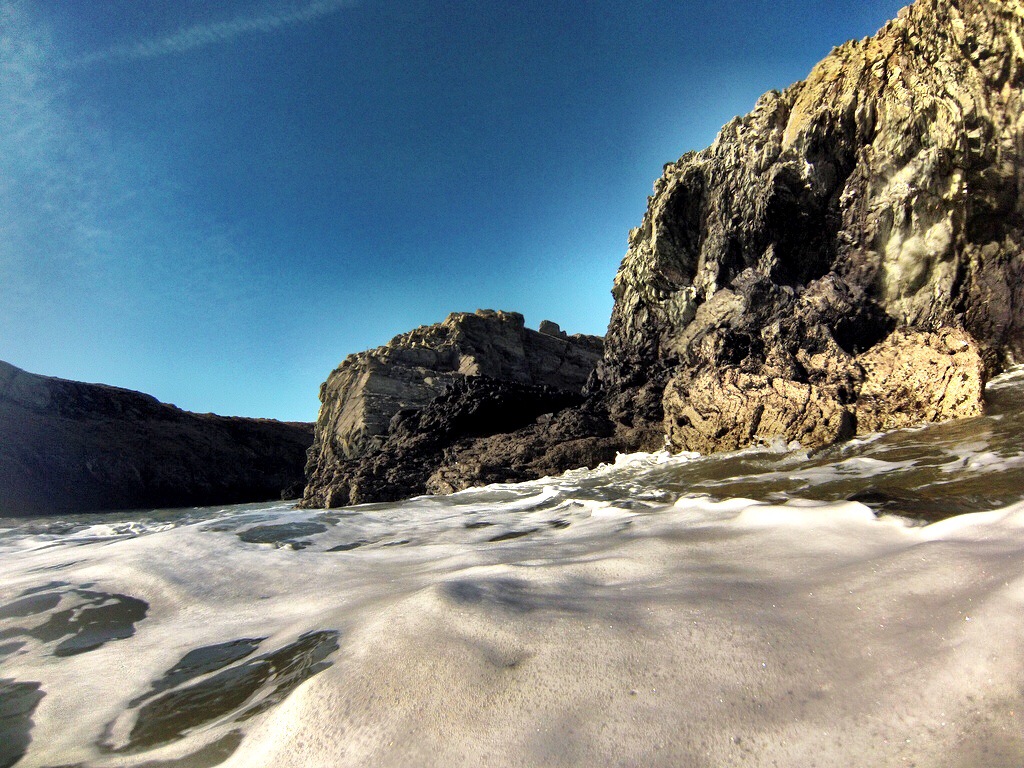 I’m sure I’ve been happier in my life, but at that moment I couldn’t think of those moments. I was ecstatic, thrilled that I had made it through the coasteering course and frankly really proud of myself. It’s important to me that I try to face fears when confronted with them, to push myself as much as possible to see just how far I’m able to go. That’s really the only way that we as people can grow as individuals and to be honest, doing the dishes at home doesn’t afford me that same opportunity.

Not only was coasteering a great opportunity to grow personally, it was beautiful. Even though it was chilly, the sun was shining brightly and there is absolutely no better way to appreciate the raw beauty of Wales than literally being part of the landscape.

So when you find yourself in Wales, throw caution to the wind and try coasteering for yourself, just in a warmer time of year

3 thoughts on “Diving Into The Insane Sport of Coasteering”