When I left for my recent trip to Germany it was onboard an Air Berlin flight. If you’re not familiar, Air Berlin is the 2nd largest airline in Germany and has a history that goes back to the 1970s. The airline has changed a lot in the last decade though, forming new partnerships and extending its reach around the world, including to the United States. It was on one of these American flights that I boarded at JFK airport in New York, eager as always for my first flying experience with a new airline.

On the way to Germany I flew in Economy, but on the way back I was lucky and found myself upgraded to Business class. So it’s with this unique perspective that I want to share my experiences with you.

First impressions matter, and I have to say that upon boarding I was overall very pleased. My status with the Oneworld Alliance meant that I could board with the first couple of groups, a small comfort that I always enjoy. Flight attendants were smiling and I even found a small amenity kit on my seat, a rarity on trans-Atlantic flights. It was a basic kit with eyeshades, socks and other accoutrements, but a nice perk for an often ignored class of service. Then I sat down.

Before I go on, let me define two airline terms.

Seat Pitch – Technically, it’s the distance from a point on one seat to the exact same point on the seat in front or behind it. In other words, it’s the best way we have of comparing legroom. It’s not exact, but it’s the best measurement we have.

Seat Width – This is an easier concept and is just what it sounds like; it’s the width of the seat and for most people is a good indicator of comfort.

Why is this important? Because as soon as I sat in my seat (41C) I knew that the pitch was less than I’d hoped, as evidenced by the fact that my knees were resting not so comfortably on the seat in front of me. I’m 6’2”, 195 pounds. Not massive, but tall and leg room is without a doubt the most important part of the flying experience to me. I knew right away that if the person in front of me were to recline even an inch, that I would be in for an evening of discomfort and pain. Wait, maybe it’s my height that makes me think the seats were small, perhaps you’re saying. Let’s look at the math:

You may be thinking to yourself that an inch or two isn’t a big deal; except that it is. One extra inch would’ve meant that my knees could exist unencumbered by the tray table, that my already damaged patella wouldn’t be further crushed under the weight of a napping businessman. It’s a technically small difference, but a large one in terms of comfort.

I’ve spent a lot of time harping on this and I feel bad. This alone did not define the flight, but it was an important aspect, at least for me. The quality of the food, the entertainment options and the aforementioned amenity kit were all excellent, far above what I’ve come to expect from other flights traveling a similar distance.

So if you’re not 6’2”, then you probably don’t care about the pitch of the seat. But if you are, then it should absolutely factor in when selecting a seat (Row 14 is the way to go).

It was with great joy that I settled into my business class seat on Air Berlin, my knees free from tray tables and napping passengers in front of me. I love flying business class and have used my miles on many occasions to enjoy this, the ultimate perk of transcontinental flights. But as I’ve learned not all are made the same, which is why it was great surprise that I discovered Air Berlin to have one of the best business class products I’ve experienced so far.

Business class sections are divided into two camps: seats that convert into flat beds and those that don’t. Before you start muttering curses about the 1%, believe me that the difference is substantial and the best airlines in the world are those that offer their business class customers a completely lie-flat experience. Air Berlin is one of those airlines. The seats are self-contained pods, offering not only comfort but a certain degree of privacy, a nice perk when I start drooling during an unplanned nap.

The service was excellent, just as it was in economy class frankly. I have to applaud Air Berlin for cultivating a friendly atmosphere; the same definitely can’t be said of every airline. Everything from the welcome glass of juice to the final request for coffee was handled with aplomb. One of the flight attendants even made a concerted effort to get to know several of the passengers, to make them feel special. Now that’s a quality I haven’t seen in a very long time.

The lie-flat chair had all the bells and whistles I’ve come to love in a good business class product, even a massage feature with multiple settings. It was a day flight so I didn’t really sleep, but did enjoy putting my feet up as I watched several movies and TV shows using the noise cancelling headphones provided for each passenger. Along with that fabulous chair was an equally impressive amenity kit, one of the ways I evaluate many business class sections. Air Berlin partners with Institut Karite for the kit and included the normal stuff along with shea butter lip balm and extra gentle body milk. Can you tell I was a happy camper?

Overall I rate their business class very high, even better than my experiences with Lufthansa in the past. 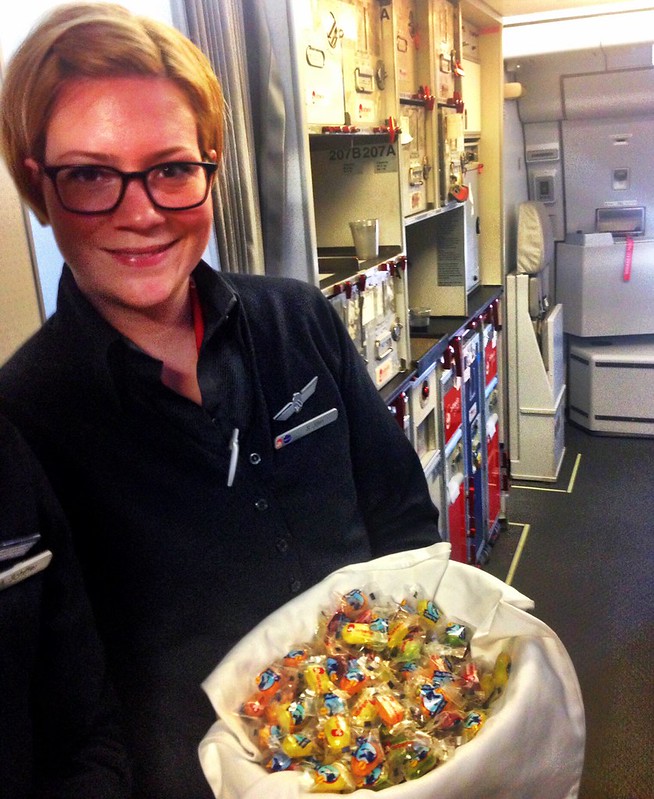 Air Berlin a good airline and provides a comfortable product at a good price. They’ve long described themselves as a semi-lowcost airline, offering many perks you won’t find on other truly low-cost carriers. But they also have something intangible and it sounds silly, but it’s a happy airline. Maybe it was the always smiling flight attendants or the chocolate hearts they passed out as we disembarked, but there are dozens of little touches that while not necessary, all contribute to an overall positive flying experience.

8 thoughts on “Air Berlin: A Review of Two Classes”