I love trains, there’s just something about them that recollects a more civilized era of travel. One travel experience though that had long eluded me was an overnight train journey, an oversight that I rectified on one of the great train journeys in the world – the Indian-Pacific across Australia.

One of the few truly transcontinental rail lines, the Indian-Pacific runs from Perth to Sydney, covering some 2,600 miles. To go the entire route, truly from the Indian Ocean to the Pacific, takes about 65 hours and goes through some of the most recognizable landscapes in Australia. For many people this trip features prominently on their travel bucket list, and I was excited to tick it off of my own. 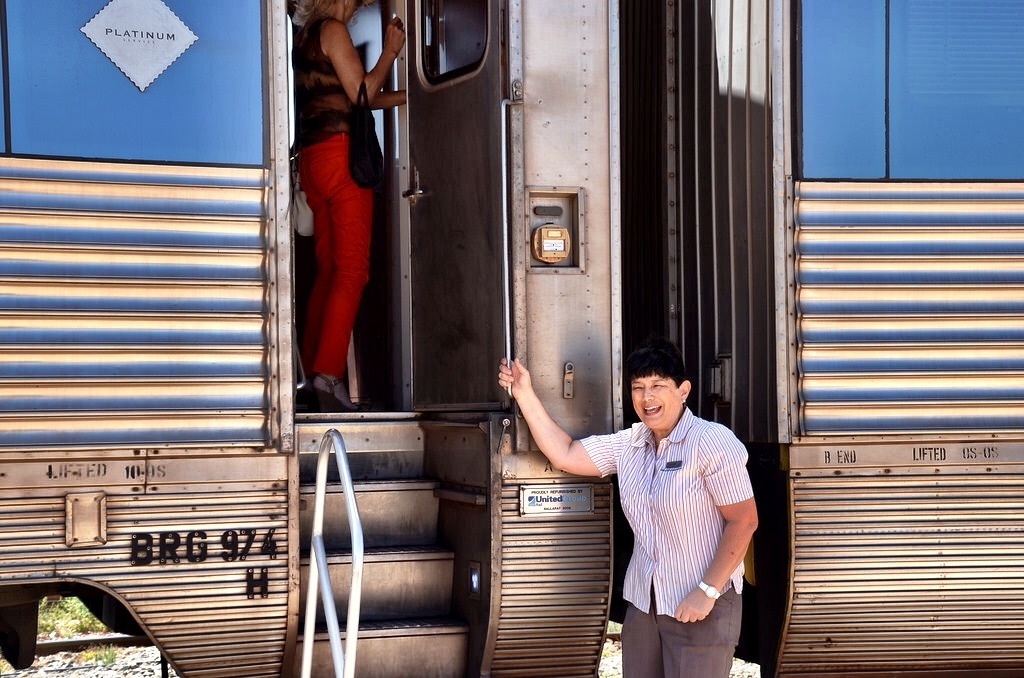 We boarded the train in Perth but had no intention of taking it all the way to Sydney. Instead my partner and I used it as a fun and different way to get to Adelaide, our next destination and a key stop for the Indian-Pacific. Although we were only going partway, that didn’t mean we wouldn’t get a great experience. The Perth-Adelaide trip still takes around 43 hours; two nights and a day and a half on board the train.

At first the idea of being on train for such a long time may be daunting, and that’s why class of service can be so important. There are three classes on board the Indian-Pacific: Red, Gold and Platinum. Red is the cheapest way to go and includes a chair and that’s about it. Many people decide to go with Gold, which includes a small cabin with fold out bunks and a small bathroom. Gold service also includes complimentary meals and drinks in the dining car. We were fortunate enough to be upgraded from Gold to Platinum, and therefore got a taste of the best way to experience one of the world’s great train trips. 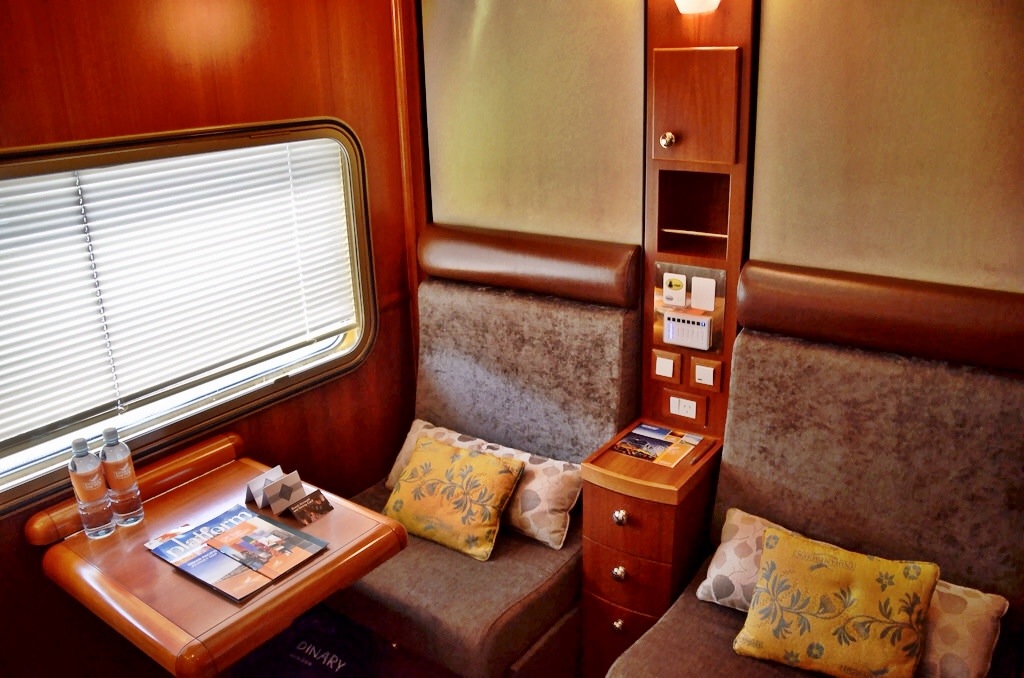 All of my research had been done on the Gold Service, so I honestly had no idea what to expect as we were shown to our Platinum berth. As the attendant opened the door I was shocked. It was a spacious cabin with extra large windows on both sides and a comfortable sitting area. The chairs were comfortable and there was plenty of storage available, hidden behind a series of small drawers and cupboards. Also hidden were the beds, which at night magically appeared in a feat of remarkable engineering skills. Once made, the beds were comfortable and even accommodated my 6’2” frame. 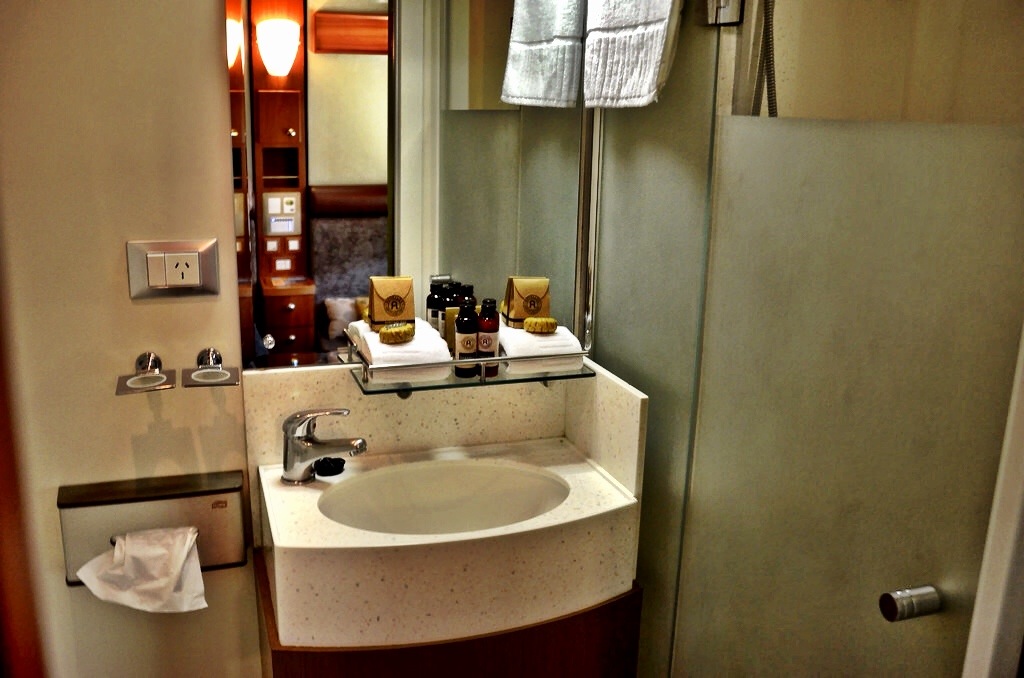 The real star of the show though was the bathroom. I expected a glorified closet, but what I found was a decent sized bathroom with everything you’d expect, including a full size shower. It was bigger than the bathroom I had on my cruise to Antarctica and I was on a train. It still amazes me to be honest.

Platinum service also includes a personal attendant, who is there to help with excursions, food and drink requests and anything else that might pop up. In our cabin we had the option to enjoy afternoon tea and snacks as well as a nightcap. There was also a small galley with drinks and snacks available to us throughout the day and night. For all other meals, we joined the folks in the Gold service in the Queen Adelaide dining car.

Just like on a cruise ship, meal times are given for each cabin, although we had plenty of say of when we wanted to eat. For each of the meals, including breakfast, there were several choices for all courses. The food was excellent, an amazing feat given the fact that everything is prepared on board a moving train after all. My only complaint was that the menus were the same for both days, no doubt due to the space limitations on board. 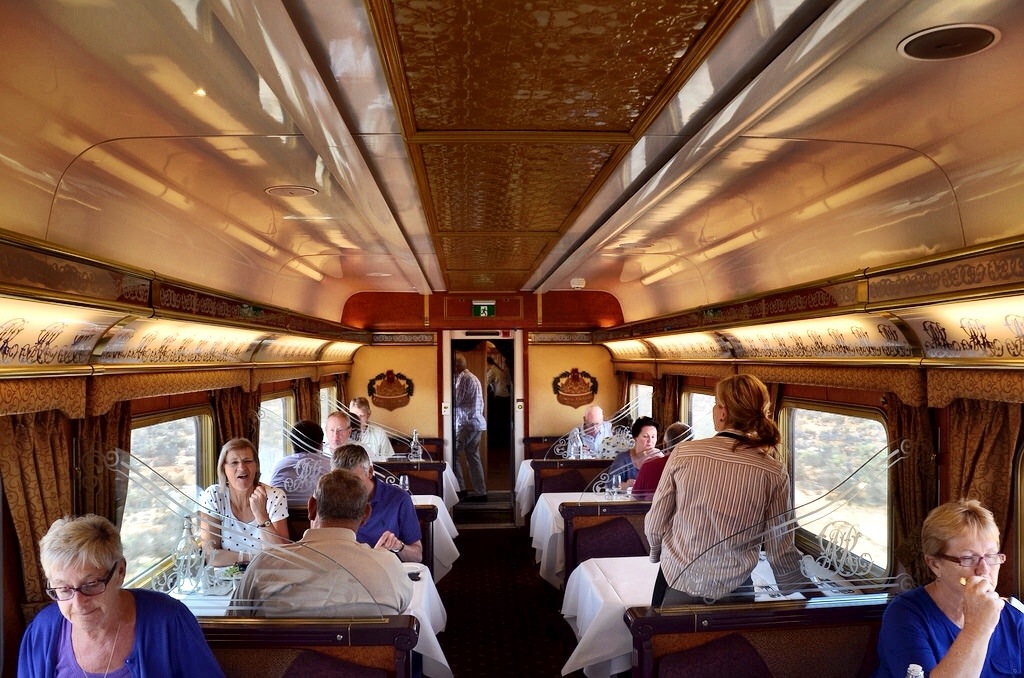 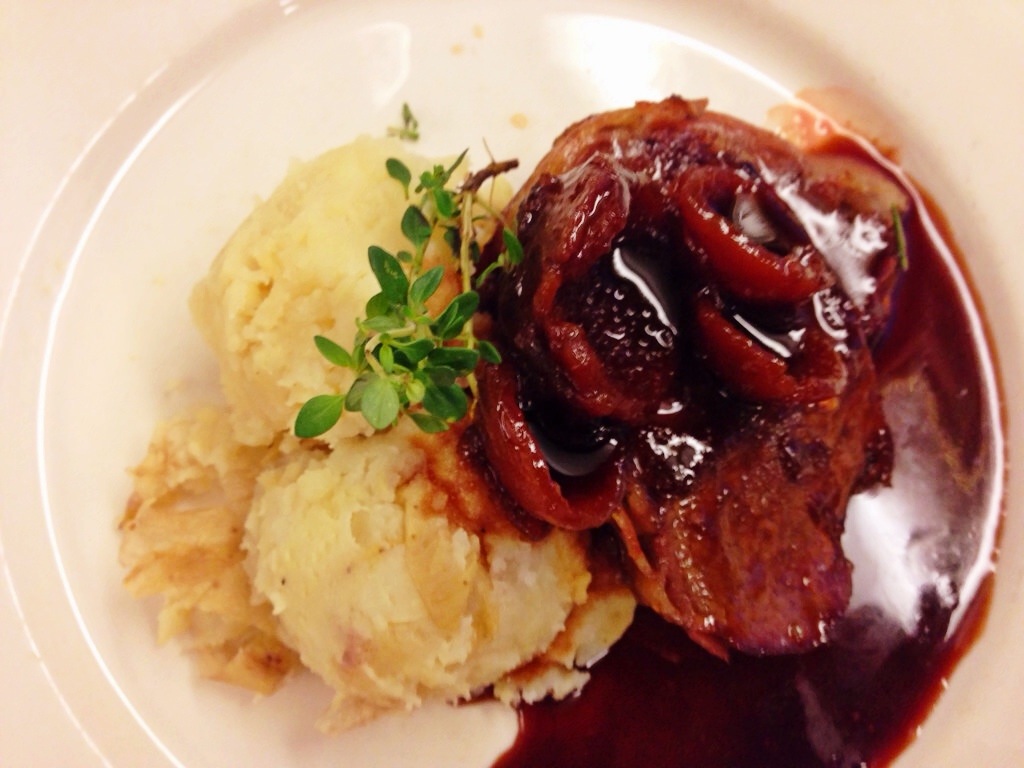 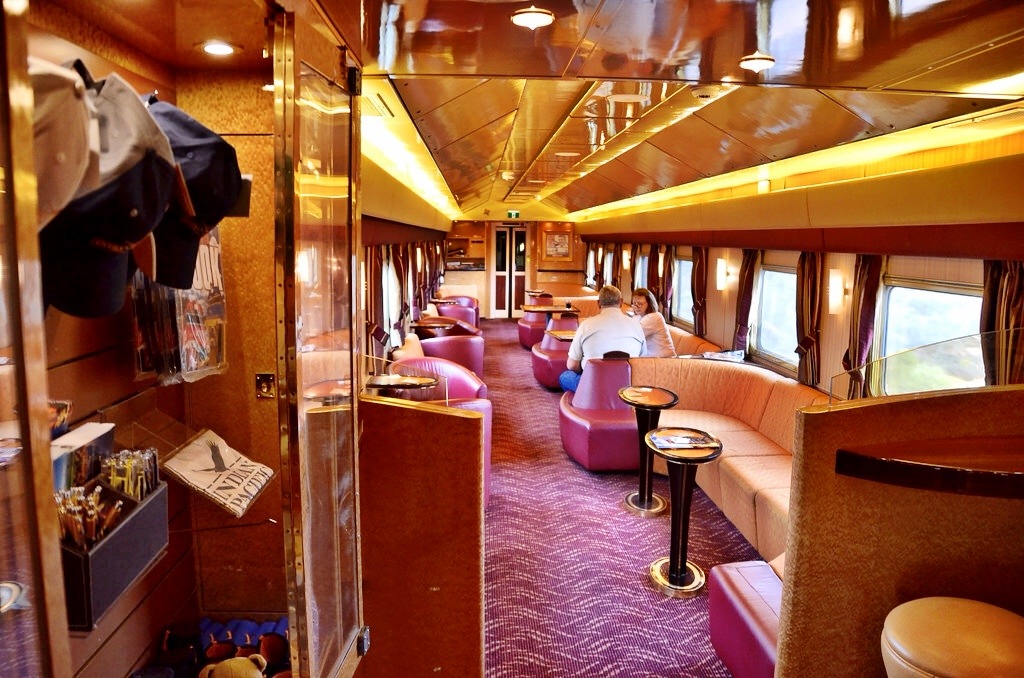 Throughout the day we also had access to a comfortable lounge car, with chairs and couches where one could relax, read a book or just watch the scenery pass by.

It’s not all voyeuristic though, the train does make several extended stops, allowing for excursions along the way. Given that we were only going to Adelaide, we only had two stops – Kalgoorlie and Cook, a dusty ghost town. But all excursions for Gold and Platinum Service are included in the price of the ticket and are a fun diversion along the long train journey. 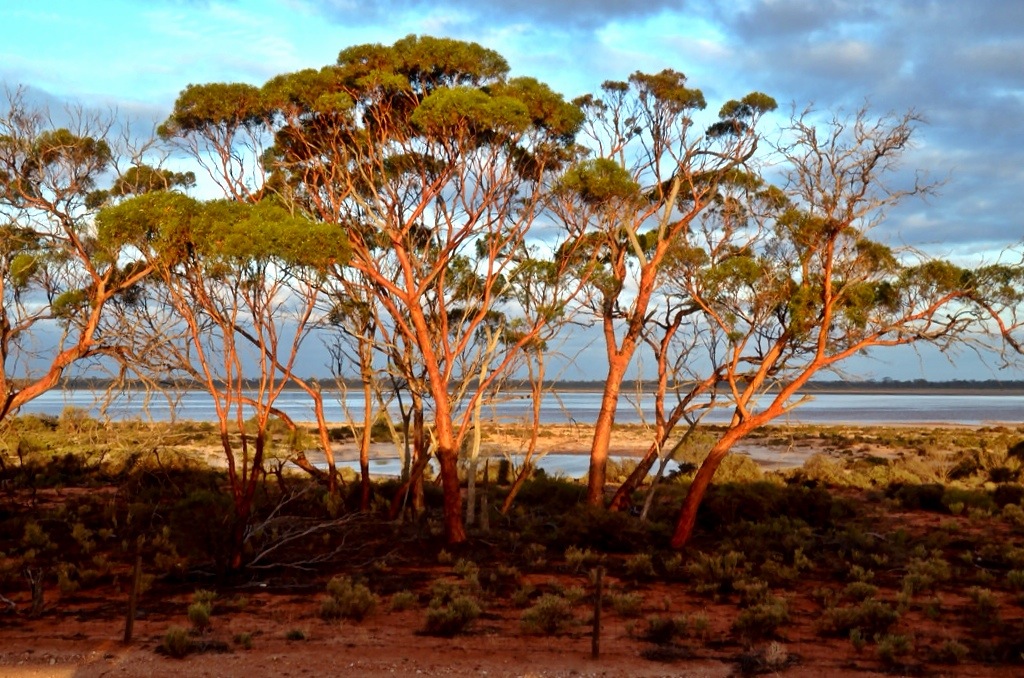 What did I really think

I was nervous before the trip to be honest. I wasn’t sure if I could deal with being on a train for so long without going crazy. Or without driving my partner crazy, or both. But I soon fell into a good rhythm and honestly the trip was over before I knew it. My only full day onboard was spent reading, writing and napping. A much needed digital detox from a hectic lifestyle. The real star though was the beautiful countryside we saw along the way.

It’s amazing to watch how the flora changes leaving Perth and approaching the huge Nullarbor Plain. A giant expanse larger than England, this barren region has a strange and peculiar beauty to it. It also features the longest straight stretch of rail line in the world. The train goes for an astonishing 297 miles without turning even the slightest. Not a bend, nothing, just a straight line.

I was also a little nervous about forced interactions with the other passengers, particularly at mealtimes. But just as with cruises, I was pleasantly surprised. Everyone treated us with kindness and respect and not once was an ill word spoken. Not only that, but we ended up making friends along the way and learned about some truly fascinating people from all over the world.

And that’s the key point I think. A trip on the Indian-Pacific resonates so strongly with people that they do come from all corners of the planet to experience the journey at least once in their life. It’s not just for a long train trip; you can get that at any number of places. No, it’s about the country, it’s about seeing Australia from the ground up, to see it for what it is and to see without prejudice all of the remarkable and diverse regions that make it one of the most beautiful places in the world. Now if that’s not a reason to want to experience this train adventure, then I don’t know what is.

Is a trip on the Indian-Pacific on your bucket list?