I love walking tours, I think they can provide a unique and fun insight when visiting a new city. I particularly love quirky and unusual tours, which is why I instantly gravitated towards the Melbourne Chocoholic Tour. It sounded like a fun way to spend the afternoon, so I signed us up and eagerly await our chocolate experience. But it was so much more than that; it was I believe the worst tour I’ve ever been on.

Incredibly, Suzie Wharton has been running her chocolate tours for nearly 20 years. I’m quite honestly shocked because I can’t imagine why they would be recommended. Maybe they used to be good; today they’re just a shell of an experience. It started out promising. It was an incredibly hot summer’s day and we met up with Suzie at the Haigh’s Chocolate store in one of the city’s famous arcades. These Victorian shopping centers are a hallmark of the Melbourne experience, and I was excited as we got our first bite of chocolate at this famous Australian chocolatier.

In 1917 Alfred Haigh began producing chocolate in Adelaide and before long, he had established a cult following. Today Haigh’s is the oldest family-owned chocolate manufacturing retailer in Australia and is usually considered to be the best. I first discovered them when I was in Melbourne two years ago, and a return visit was high on my list. But none of this history, or why Haigh’s is important in Australia, was shared by Suzie. No, instead she began odd rituals that would become the theme of the tour.

“Let me just say to you,” was uttered by Suzie at least 75 times in the course of two-hours, a fact that is sadly not exaggerated. It was the worst example of a mental hiccup I’ve ever seen, but that in itself wasn’t the problem. It was the franticness behind it that was the issue. Whatever Suzie had to say, she was very intent that it be shared as quickly as possible. Sadly most of the information wasn’t all that interesting and most times she lost track of her thoughts while imparting the supposedly important facts. 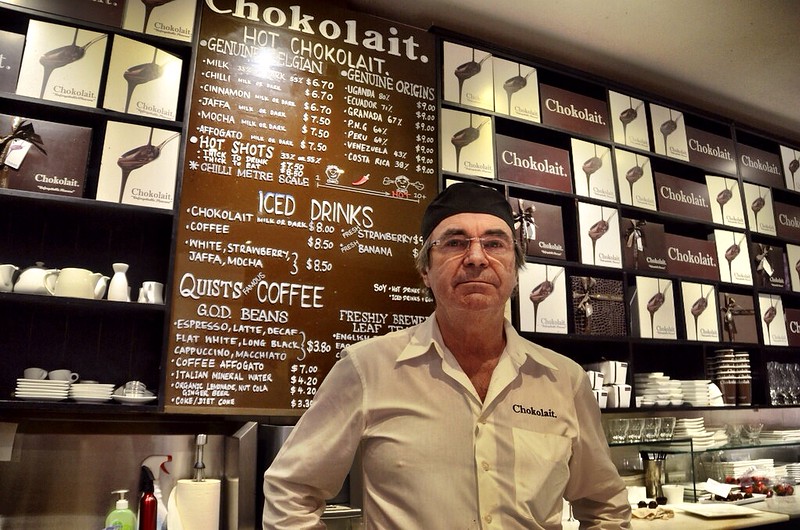 I learned nothing from her about the history of chocolate in Australia, why it seems to be so popular and why Melbourne in particular has so many high quality chocolate-based establishments. No, that information was shared with me by the owner of Chokolait, a trendy chocolate cafe that has been doing business in Melbourne for years. After changes to Australian immigration policies over the decades, large numbers of people emigrated from Europe, particularly after World War II. They brought with them their languages, customs and of course food. This rich influence on the Australian culinary scene can be found everywhere, but the chocolate influence while slow to start, became one of the most pronounced gifts of the new immigrants. The new chefs encountered a population that was prime for changes in their diet, apparently especially where chocolate was concerned. It’s an observation I made during my first trip to Australia; Australians have a pronounced sweet tooth and luckily for them, they have many ways to satisfy it.

But sadly, none of this was shared by Suzie. Instead we went from chocolate shop to chocolate shop, learning about her chocolate travels around the world and the latest chocolate factory where she went on a tour. We weren’t alone, she befuddled and confused shop owners wherever we went. Surely they’re used to her by now, but still I noticed looks of exasperation when she entered the room. We did get generous samples of chocolate though, which ultimately I suppose is the real point of the tour. From honeycombs in Haighs to a refreshing iced chocolate drink at Chokolait that was so good, I bought a full sized version to take away. The tour was also helpful in reacquainting us with the labyrinthine laneways of Melbourne, curiously hidden almost in plain sight.

By the end of the tour I was frustrated, but had stopped listening to Suzie so my original angst was long gone. Instead I was content just strolling with a few chocolates on the side every now and then. The tour concluded at Laurent, where a cake and coffee was included in the price of the tour. Mysteriously Suzie said she had to leave citing an appointment. An odd excuse if you think about it, I’ve never had a tour leader schedule something else to do during a tour. But I wasn’t surprised and was indeed relieved that this exhausting, whirling dervish of chocolate had finally taken her leave.

Chatting with the other tour participants, no one was happy per se, but the chocolate seemed to have had a calming effect. Was it the tour they wanted? No, not even close, but two hours of being plied with chocolate in a variety of forms seems to have had an anesthetizing effect, numbing us to the pain of one of the worst tours I’ve ever been on. Had the tour not been $40 a person, I think we would have been disgruntled but not angry. But at that price I expect a lot more than just being led around to a few shops being fed what became the most expensive chocolates I’ve ever consumed.

Have you been disappointed by a tour experience? Where was it?

5 thoughts on “The Worst Tour in Melbourne”