If I learned one thing during my trip to Taiwan, it’s that they take food very seriously. I’d even go so far as to assert that food is at the crux of life and culture in Taiwan. That doesn’t mean everything is traditional and staid, far from it. Around the country you can find dishes featuring the latest in modern cuisine alongside very traditional and revered recipes. One thing I noticed while in the capital city of Taipei were the many options available to diners, including these three very different ways to enjoy a meal in Taipei.

Night markets and other small street food restaurants are one of the best parts of traveling around Asia and Taiwan is no exception. From the big cities of Taipei and Tainan to small towns and villages, a robust tradition of fresh and cheap food abounds. At the night markets you can find a little bit of everything, including traditional (and gross) stinky tofu to the more palatable hunks of roasted meats. I prefer something a little more low key though, instead opting for a street side shack serving up fast and tasty meals for lunch or dinner. You have to be organized before you start, know exactly what you want, order it quickly and stand out of the way. But the Soup Nazi protocol is worth the hassle, as the resulting meals will be some of the best you’ll enjoy in Taiwan. 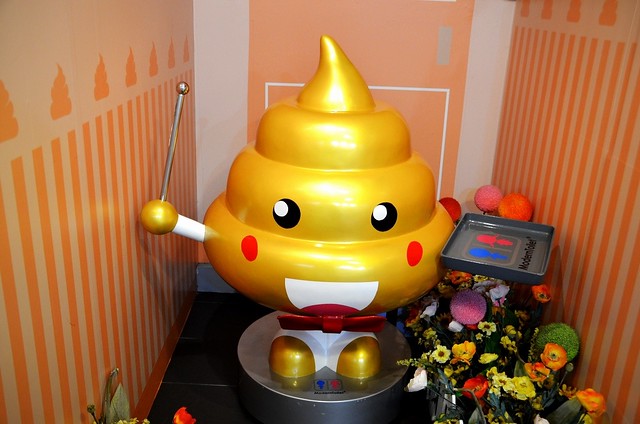 Experts say this phenomenon sweeping Taiwan was originally inspired by Japanese pop culture and like the Japanese, Taiwanese also work long hours and frankly need a little bit of fun in their lives. The cafes provide this quirkiness, along with some pretty decent food. While they do tend to attract a younger demographic, there is no doubt that the cafes are now firmly rooted in Taiwan’s pop culture.

Launched in 2004, some say that Modern Toilet helped usher in the themed-cafe craze in Taipei and indeed, it is still busy proving that it’s more than a novelty. I remember hearing about this bathroom inspired cafe when it first opened, wondering what sort of demented mind could conceive of such a disgusting food theme. But that revulsion has worked in their favor and every day scores of people eat at Modern Toilet for the chance to be presented a meal in their own miniature toilet bowl.

In case you’re looking to eat in a building or a place without poop-inspired entrees, there are plenty of excellent restaurants throughout Taipei, from the very high end DN Innovación led by chef Daniel Negreira to the more standard Din Tai Fung, home of the soup dumpling.

They have dozens of locations around Taiwan and the world, and the line at the flagship restaurant can sometimes snake for two hours. But from my own experience I can verify that it’s well worth the wait. A meal at Din Tai Fung is a process, a symphony of tastes that starts out slowly until the loud climax with the soup dumplings themselves. Plates upon plates of small snacks, appetizers for the table to share covered every inch of space before the first dumpling was even introduced. You have to visit this restaurant hungry as to waste even a small bite is a cardinal sin. Known in English as soup dumplings, that actually isn’t the best description for Xiao Long Bao. These tasty bundles of dough are meticulously filled with a variety of meat options, folded and then steamed to perfection. The filling though is really meat aspic, which means when heated hot soup magically appears within the bun itself. The result is culinary perfection and a meal that begs for repetition.

No matter where you eat in Taipei though, you are almost always guaranteed a wonderful culinary experience.