A few days ago I had the opportunity to fly with Virgin Australia for the first time, an experience I long looked forward to. I had flown with their sister airline Virgin Atlantic last year and the experience was one of the best I’ve had on any airline. Of course that was in Business Class, and it meant that Virgin Australia had a lot to live up to. And on the whole, they did.

My flight from Los Angeles to Sydney, Australia was on a Boeing 777-300ER, coincidentally my favorite aircraft. Like most long-haul carriers, Virgin has split the flight into three classes of travel: Economy, Premier Economy and Business.

The Premier Economy cabin was comfortable, featuring seats with a 34″ pitch and a chair width of 18″. The arrangement in the cabin was 2-4-2 and I luckily was in the 2 side. Unlike some other Premier Economy products I’ve flown, the seat was in fact more comfortable than economy and there was quite a bit of extra space as well. On a 15-hour flight every bit of extra space instantly becomes a prized commodity.

The best testament I can give to its comfort is that I did something I rarely do on long-haul flights, I slept. I slept for an incredible 7 hours, almost unheard of for me and it meant that I arrived in Sydney reasonably well-rested instead of bleary eyed and semi-coherent.

The seat of course helped with this, but so did the amenities. I was impressed with the amenity presentation, it was as good as some business class flights I’ve been on. Included in the bag: eye mask, ear plugs, socks, lotions and a toothbrush and toothpaste. This combined with the noise cancelling headphones they provided, the comfortable pillow and heavy blanket meant a great night’s sleep. 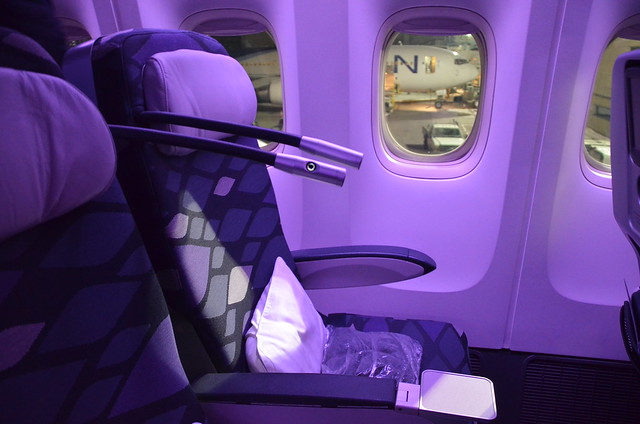 Without a doubt the service on my Virgin Australia flight may be the best I’ve ever experienced; or at the very least close to it. As soon as I found my seat a constantly chipper flight attendant named Melissa offered me a beverage and helped me get my bags situated. Throughout the flight she was there to answer my questions, from getting more ice to some tricks in navigating Sydney airport. She wasn’t alone either, the service provided from everyone was truly great.

The food wasn’t bad either! As in Business class, Premier Economy passengers were presented with printed menus with options for both dinner and breakfast. The food itself wasn’t the best I’ve ever had on a flight, but it wasn’t the worst either. I am sure the food in Business class was of a higher quality, but in general I have no complaints about my meals. The one thing lacking was a snack service. Every other flight of that incredible length on which I’ve been has offered some sort of snack midway. In lieu of this they did offer Premier Economy guests an open bar area with bags of pretzels, chips, juices and soft drinks. That was fine, but a greater selection would have been great and I did get hungry well in advance of breakfast.

I really can’t recommend Virgin Australia enough. Like all Virgin airlines, they revel in being cool and hip. Mood lighting is the norm and they have a casual and friendly vibe that few other airlines possess. Particularly if you’re flying from the US to Australia this is a fantastic option. I flew with Qantas last time I visited the Land Down Under and the experience was not a pleasant one. Given the choice, I’d go with Virgin every time.

Have you ever flown with Virgin Australia? What did you think?