Food is I think the most important part of the travel experience. The smells and tastes of the culinary aspect of travel are memories that we carry with us for the rest of our lives. That’s why I’m always mindful to discover the foodie side of new destinations along with the famous attractions and museums. 2013 was a pretty great foodie year of travel for me, but these delicious discoveries were amongst my most favorite. 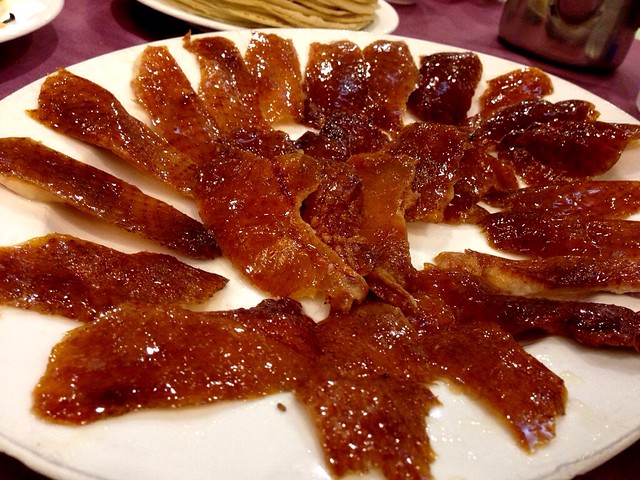 Without a doubt, the Peking duck I enjoyed in Taiwan was my favorite meal of the year. It was so good that I went back and had it a second time. The adventure starts by ordering how you want the duck presented. Your options are duck served in one, two or three ways. Option one is the classic serving of the tasty duck, option two involves mixing the meat with scallions and soy sauce and serving it over rice and the third way is making a soup from the stock. Keep in mind, it’s not one or the other, if you order it three ways, you get all three ways. The classic is of course the best and more than enough food for several people. The duck is first presented to the table in all of its roasted goodness before the skin is served to the salivating diners. The proper procedure is to wrap pieces of the skin along with scallions and hoisin sauce in a small crepe. This simple layering of flavors quickly became one of my favorite meals I’ve ever had. It’s so good I actually think about it every other day. Now I’m hungry.

Amongst all the Croatian cheeses the most desired is Pag cheese, from the small island of Pag near Zadar. The clinical definition of this delicacy is that it is a hard, sheep’s milk cheese made on Pag; but that definition doesn’t come close to capturing the essence of the delicacy. The cheese is uniquely flavored thanks to the island’s renown as a salt production center. Intense winds spread the island’s salt dust onto everything, including vegetation. This means that only the most hearty, and coincidentally aromatic, plants can survive and it’s upon this salty, nice-smelling flora that the sheep feed. That’s why the only true Pag cheese can come from sheep raised on the island and it’s also why the cheese is so very, very good.

South Africans enjoy their food and thanks to a very unique history, they have created a curious culinary set of traditions that draws on many different cultures. One of the best examples of this foodie melange is bunnychow. A working person’s food, bunny chow is a rich curry of one’s choosing that is served inside a hollowed out loaf of bread. Meant to be cheap and hearty, bunnychow isn’t for the faint of heart but this spicy goodness is one of the keystones of South African comfort food.

I definitely have a sweet tooth and I especially love trying new ice creams when I travel. The best one I found this year was in Ireland at Murphy’s Ice Cream. Started more than a decade ago by two brothers, this popular ice cream shop has three locations around Ireland and prides itself on local ingredients. In fact, it was the quality of the ingredients that first prompted these Americans to set up shop in their homeland. The dairy products and the flavors were some of the best they’d ever had. Murphy’s of course has traditional flavors like vanilla and chocolate, but they are known for creating unusual but authentically Irish flavors like Irish brown bread, Guinness and even Irish cheddar. Even better, combine the flavors into one dish making your own uniquely Irish dessert.

What were some of your favorite foods you found traveling in 2013?