A cruise to Antarctica is not your average cruise; it is a once-in-a-lifetime experience for many but based on the questions I get it’s one destination that few people know  a lot about. Many people also aren’t familiar with expedition style cruising, so I wanted to take a few moments to provide you with an honest look at what daily life on a cruise to Antarctica is really life.

There are a few different ways you can tour the Antarctic Peninsula. While many people spend days crossing the nausea-inducing Drake Passage, I opted instead to take a fly-cruise, flying directly from South American to Antarctica. My sponsor for this trip was Adventure Life, an adventure tour company that specializes in taking people to some of the most amazing places on the planet, including on Antarctica tours. I chose their fly-cruise option because time is always a factor and saving a week of travel time is a big deal for me.

Just as with the ship crossing though, even the flights are at the mercy of Mother Nature. Passengers arrive in the southern Chilean city of Punta Arenas a day or two in advance to make sure they’re on time and to tour the city. Before the departure day, staff held a briefing in the hotel to run over expectations for our arrival into Antarctica and to issue massive, rubber boots. These boots became my constant companion throughout the trip, the one item of gear that perhaps helped me more than anything else.

Our flight was slightly delayed, but we arrived just a few hours later to the air station at Frei Base. From there we met our other constant companion for the duration of the trip, the Zodiac boat. You’ve probably seen them, they’re rigid inflatable boats that are used by everyone from the military to explorers and are great vessels to use to maneuver in and out of tight spots. Our ship was in the distance, beckoning silently but after a short Zodiac ride I was on board and ready to go! 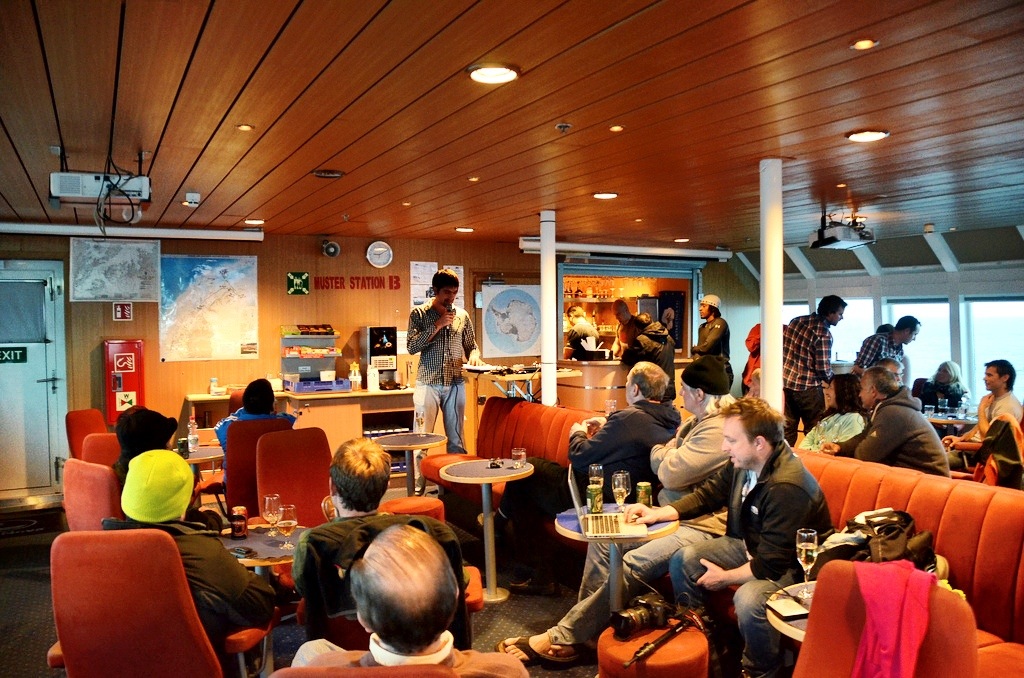 I love expedition style travel. There is something so inherently exciting about the experience that I always feel like a kid at Christmas. Once boarding the Ocean Nova, I was shown almost immediately to my cabin, a modest if not comfortable room. My cabin was set up as a single, but a hidden bunk revealed that it could easily accommodate two people. These ships experience very rough seas at times so everything that can be bolted down is literally bolted to the floor. That also means that the accommodations are pretty spartan. There was a bed, desk, chair and built-in wardrobe and that’s it. It’s Antarctica, so TVs and phones are pointless. The bathroom was small but perfectly functional. People spend a lot of time and money on these trips though so the rooms are comfortable, don’t get me wrong and there are many different cabin configurations available including more standard looking hotel-style cabins with double and even queen size beds. But you honestly don’t spend a whole lot of time in the cabins, aside from sleeping and changing for the next excursion.

The really important rooms on the ship are the common areas. On the top deck was the observation room, a relaxing and large lounge space with plenty of booths and chairs to accommodate everyone on board the ship. People gathered here frequently to watch the Antarctic landscapes float by, read a book, chat, grab a drink or just relax. It’s also where we met every evening to go over the schedule for the next day. I made a lot of friends in that lounge, and spending an afternoon whale watching while sipping a hot chocolate will forever be one of my fondest travel memories.

The other important common room was the dining room. Immaculately set tables met us three times a day as we ate and communed with each other. Meals are included of course and the quality was much higher than I expected. Dinner is where the chef really shined, offering a choice of delicious entrees all accompanied by fantastic Chilean wines. Guests also had access to a library to research the wildlife seen on a daily basis and could even pop by the control room and watch the captain at work.

Communications weren’t entirely impossible either. Guests can buy both phone and Internet time for a fairly modest fee to reach their loved ones back home. I was told the phone worked especially well but from my experience the Internet was spotty. This is to be expected of course, I was in Antarctica, and eventually I came to relish the fact that I couldn’t hop online. It was a rare few days without the World Wide Web and that suited me just fine. 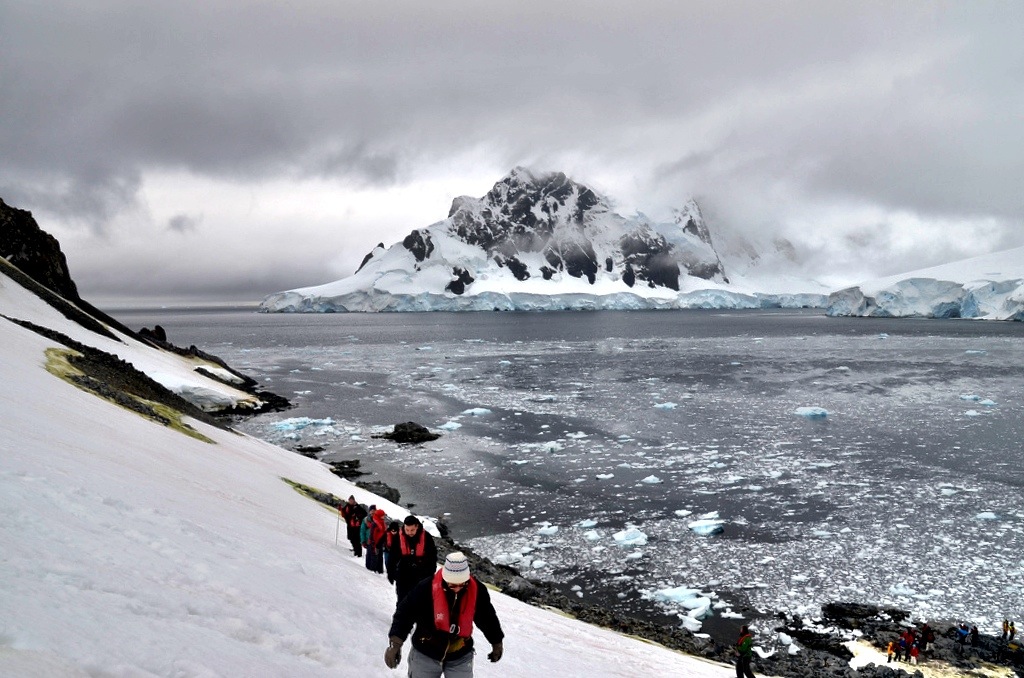 The focal point of these trips is of course what you see and do. Every day the ship visits a new spot along the Antarctic peninsula, the specific locations vary based on weather and ice conditions. The night before staff announces where they’re going and what to expect. Some of the excursions included an afternoon on Deception Island, many hikes with penguins and even a visit to an Antarctic research base that hadn’t seen visitors in months. The hikes were accessible to just about every skill level, although a couple of them were definitely more strenuous than the others. But that’s why we were there, to get out and explore and to see for ourselves what makes this part of the world so very spectacular.

The staff is an important part of these experiences and on the whole I was pleased with the Ocean Nova experts. At times they could have provided a little more information, but overall I felt like I received a solid education while traipsing through the icy 7th continent. That’s what the ideal expedition-style cruise is all about, the experiences and the education received.

I should also note that at times the ship traveled through some incredibly rough waters, but that the staff alerted us to that well in advance. The on-board doctor had a supply of seasickness pills which I used after my first ever experience of that dreaded ailment. Because we skipped the Drake Passage though, the cruise didn’t really experience anything that was too bad or which guests couldn’t handle. 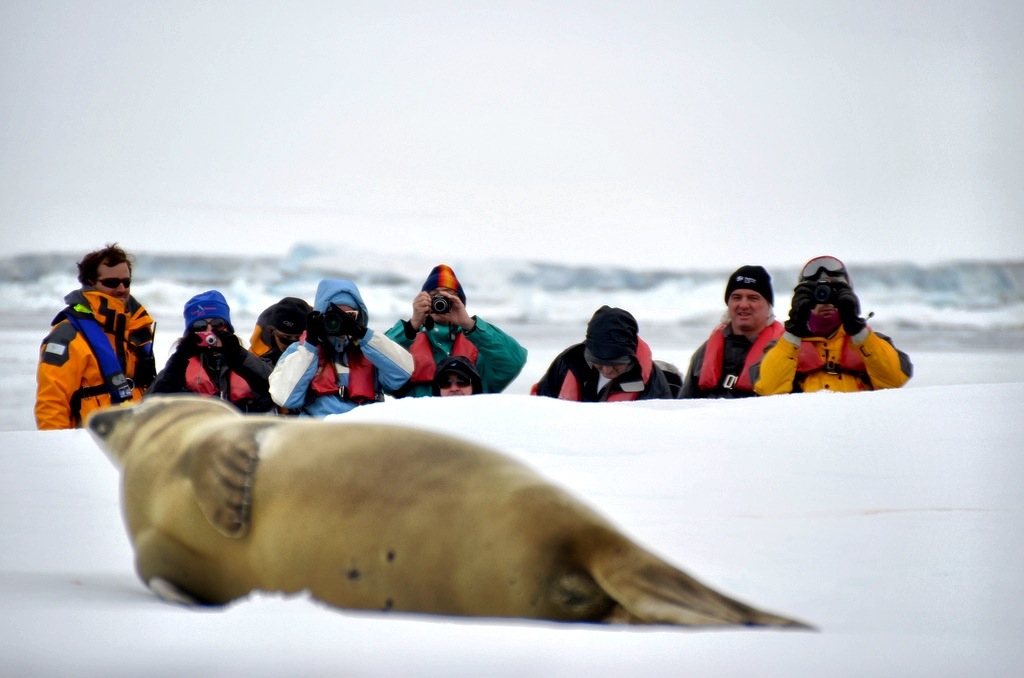 Before Antarctica, I had only been on one other expedition-style cruise to the Galapagos. I had an amazing time and made friends that I still keep in touch with today. I shouldn’t have been surprised then when the same thing happened on my Antarctic cruise. Maybe it’s the lack of anything else to do on board the ship or the very unique experience, but the passengers all got very close to each other very fast. Even though we came from incredibly disparate walks of life, from professional football players to tech geniuses, we were all laughing and sharing jokes by the end of the first day. Experiences like a cruise around Antarctica are so unique and so special that people want to share it, especially with those who can relate to it. We all formed a little family during that week on the Ocean Nova, a wonderful phenomenon that I think must be inherent to most small ship expedition-style cruises. It’s a fantastic additional benefit that in turn extends the life of the cruise from 1-2 weeks to a lifetime.

Antarctica was the culmination of years of dreaming and now, almost a year later I find myself thinking back to it almost daily. It’s a special experience that I think everyone should try to do at least once because trips like these truly do change one’s outlook on everything in life.

Is there anything else you want to know about daily life on board a cruise to Antarctica?