Exploring the Wild Atlantic Way along Ireland’s southeast coast surprised me in a lot of ways. I knew the countryside would be pretty, but I wasn’t prepared for the jaw-dropping verdancy of it all. It wasn’t just the color green that caught me by surprise, the cities did as well. To be honest, I had never given a lot of thought to Irish cities other than Dublin, so when I discovered that places like Killarney and Cork were amazing in their own right, I was truly and pleasantly surprised. Nothing though prepared me for a very unique kayak experience, not in a wild stream or along the coast, but in the middle of the city of Cork itself.

Like many cities in Ireland, Cork has ancient origins. Founded in the 6th century, Cork has always been important no matter who controlled it thanks to the ports. You can see the stamp of eras gone by everywhere, from old factories long since shuttered to the beautiful Georgian homes now used as office spaces. The city is attractive, smart and friendly – a good way to describe all of Ireland really. One thing I learned a long time ago about visiting new cities is the importance of seeing them from different points of view, and my favorite is by water. In my own hometown of Washington, DC, there are sights and features that can ONLY be seen from the water, and that example has taught me to seek out the same wherever I go. So when the invitation came from a local company to join them on a kayak adventure in the middle of Cork, I couldn’t say no. 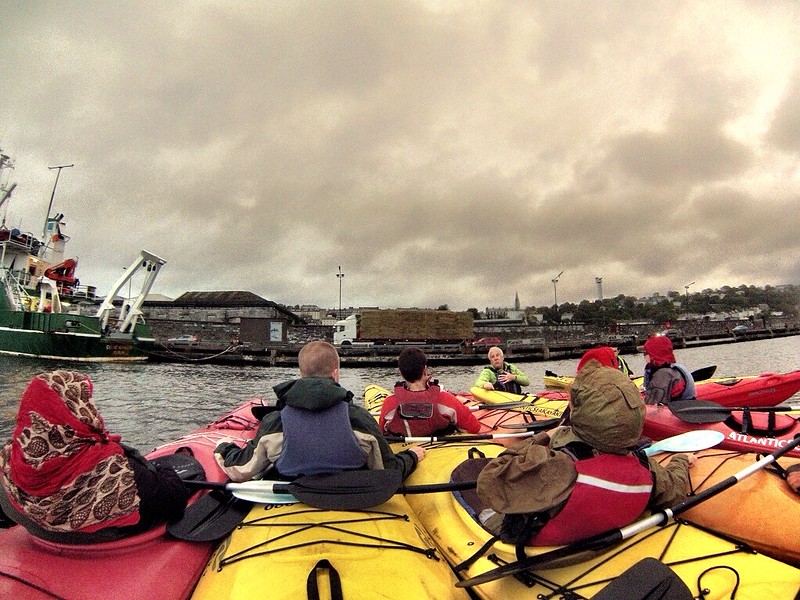 I was led in my adventure by the fine folks at the Atlantic Sea Kayaking company. For almost 20 years they’ve been leading tours around the world that emphasize sustainability and education. After a comprehensive briefing, they helped me into a tandem kayak for the evening adventure. Joined in the tandem kayak with a good friend, we followed our expert guides and quickly glided through the water, eager to avoid the rising waters. The River Lee is tidal, so it’s not always possible to pass under certain bridges, but we managed to squeak by to find the broader channel that beckoned us to follow.

Cork was an early industrial town and still today the port is an active one, but the tour isn’t all cranes and barges. Heading up one of the arms of the river, we floated by pedestrian walkways and buildings, bridges and people out for an evening stroll. I felt like an unlikely voyeur; watching life go by from a distance nearly undetected. 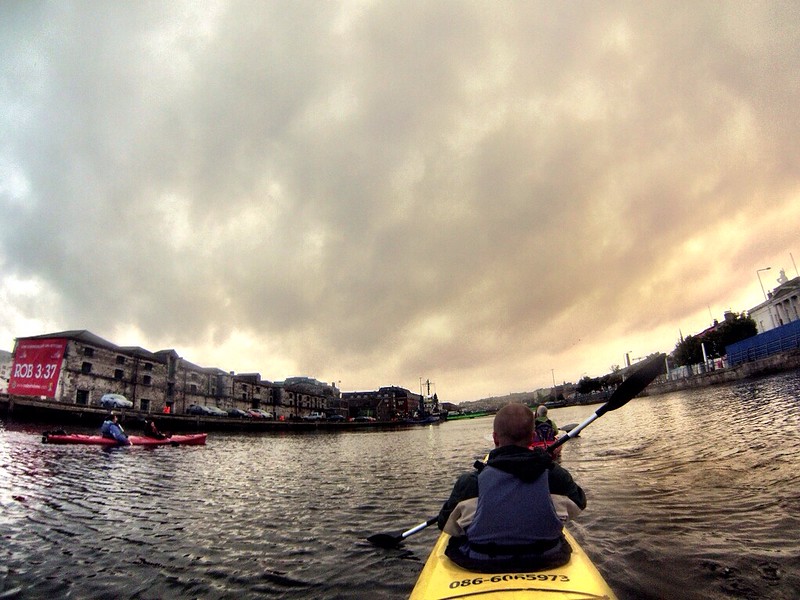 The beauty of the tour though wasn’t just learning about the history of the city from our guide, or how the city has changed over time. It felt damn good to be active. Sure, when we travel we’re almost always active, but not necessarily in a meaningful way. I don’t consider walking through a museum or a city market exercise, no matter if I am exhausted after the day is done. No, there is something necessary about doing something truly active on a trip and I know for me that the exercise cleared my head and put me on the path to erasing the two bread puddings I had already consumed that day.

Night fell, the rain picked up and we paddled to shore, in no great hurry even in spite of the droplets blanketing our boats. It was a great moment that I didn’t want to end. It was an experience that connected me to the city in a way that can’t be anticipated or planned; a type of experience that when it does occur, you learn to relish and extend for as long as possible.

1 thought on “An Unusual Urban Kayaking Experience in Cork, Ireland”