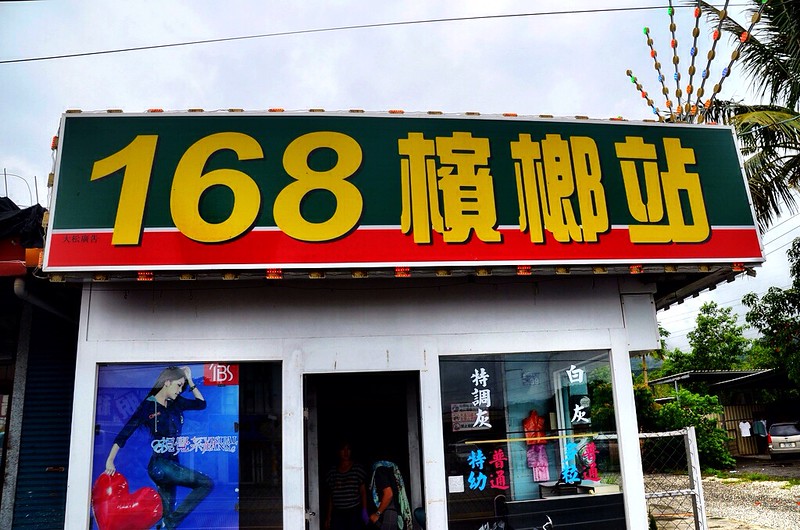 Driving around Taiwan I saw the bright neon signs everywhere, like twinkling spokes of a wheel beckoning customers to stop. The shops were all similar, glass boxes or small stores staffed by one or two people, usually scantily clad women. I couldn’t figure out what the shops were, the consistency in signs though led me to believe they were similar to French tabacs, but I wasn’t really even close. As I learned midway through my trip around Taiwan these enticing storefronts were selling betel nuts, the famous psychoactive stimulant I’d head so much about.

I remember first hearing about these strange nuts (they’re not really nuts, they’re technically a drupe, like pistachios) either in National Geographic or on one of the many documentaries I’ve watched about Asia and the Pacific over the years. People in this part of the world have been chomping down on betel nuts for thousands of years, having long ago realized that by chewing the nut and leaf together a mild stimulant is created. In Taiwan the small, rolled packages are chewed by truck drivers and blue-collar workers for the most part, but that doesn’t mean other people aren’t curious, including myself.

So what exactly does the betel nut do? Well supposedly one chews the nut rolled in a small bit of leaf and the result is a warming sensation and a quick wake me up; sort of like a cup of coffee. The ill effects though could be seen everywhere; teeth stained red from the nut’s juice the most visible result of the habit. And habit it is, the behavior of people who chewed the nut regularly reminded me a lot of tobacco addiction and in fact, small bits of tobacco are often added to the betel nut package. After a few days of seeing the flashing betel nut signs everywhere my curiosity got the better of me and I decided to give them a try.

Enlisting the help of my driver, an ardent betel nut chewer, we stopped at the nearest stand where we surprised and amused the local residents. They were kind though, after I made it clear I didn’t want an entire package of 30 wrapped nuts, they gave me a few for free so I could try them out. So with the kindness of strangers behind me and an insatiable curiosity propelling me forward, I started my first and last lesson in the fine art of chewing betel nuts.

In an ideal world I would have put the leaf-wrapped nut in my mouth, biting it in half to release the meat inside and then immediately nestle the pieces between my lip and gum. However after biting the little, innocuous looking nut in two the explosion of flavor was so intense that I couldn’t handle it. It’s not a good flavor either, the taste was intensely bitter and just plain awful. My first inclination was to spit, which I did and then to swallow, which I also did but really shouldn’t have. My first, and last, experience with the betel nut had not gone well but even with that limited exposure I started to feel some effects from it. Even though it’s not in the literature, the areas in my mouth where the nut had been felt mildly numb, as if an anesthetic had been applied. And that taste! That taste was something I just couldn’t get rid of, the acrid flavors combined with the woody texture of the nut for a truly horrible sensation.

Everyone laughed good naturedly as I failed the betel nut test, my driver went on to buy a packet of nuts for the long drive ahead and before I knew it we were gone. But that’s not why I wanted to try them. I could care less about the stimulating effects of the nuts; I’ll just buy some coffee if I need a pick me up. No, I wanted to try it because it was yet another way of getting to know Taiwan in a way that is intensely personal and not just made up of seeing temples and famous sites. I knew the betel nut culture was important and I wanted to make sure I at least tried it to better understand the country even just a little bit more. That’s what I love most about travel and it’s what keeps me always planning my next trip; the chance to learn something, anything that I didn’t know before. Even if it means chewing some betel nuts.

Have you tried something unusual or even disgusting on your travels? What was it?

21 thoughts on “The Day I Chewed Betel Nuts in Taiwan”