I travel a lot; it’s my passion and my job. But it’s not every time that I am touched by a country, moved by the passion I find there. Such was the case in Ireland, a country I didn’t expect to be as inspired by as I was.

It started while at a party and the local band played a very unique cover of a current top song, Wake Me Up by Avicii. The cover was unique not because of the musicians, although they were certainly good. No, it was unique because it was sung entirely in Irish. Although I didn’t understand the words, the melodies entranced me and seeing the young group embrace traditional Irish song, dance, drumming, all of the key components of folksy music in Ireland was amazing. I’ve been to a lot of countries and regions around the world where these traditions are dying out, the youth indifferent to losing important parts of their cultural identity. This wasn’t the case in Ireland and it inspired me.

Don’t get me wrong, not everyone in Ireland is speaking fluent Irish or Gaeilge. In fact, very few are in spite of the fact that Gaeilge is mandatory for 13 years in the life of an average Irish student. The problem is that the language isn’t taught as a living tongue; instead archaic poems are taught, much like Latin. That’s a shame. Because while I never heard the language spoken in Dublin, once I headed west to the coastal communities I walked by groups shifting between Irish and English perhaps without even realizing it. The language is indeed used, but it’s not terribly widespread and those numbers are undoubtedly dwindling.

Unlike many other countries, Ireland has long realized the importance of maintaining its cultural heritage, because they came perilously close to losing it altogether. Under harsh, British rule any mention of Ireland, much less traditions, were prohibited and they were very nearly lost to time, another lost civilization. But the Irish being the Irish refused to give in and saved their cultural heritage to pass along to future generations. While not everyone in Ireland has of course taken the time to master the language or pick up the tin whistle, that doesn’t mean they don’t honor those traditions. 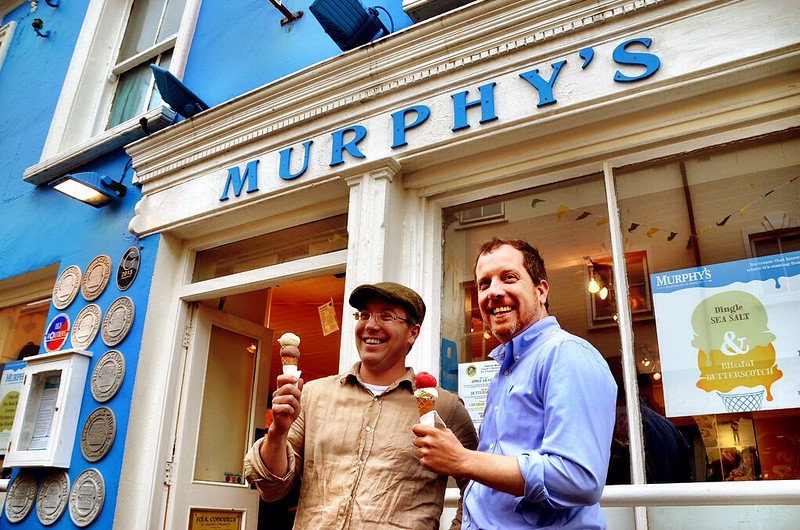 A good example are the brothers Murphy, the owners of an iconic ice creamy headquartered in Dingle. Quite accidentally, these first generation Americans returned to their home country to honor Ireland through dessert. The flavors are delicious, unusual and decidedly Irish. Caramelized brown bread, Irish oats, orange marmalade and cheddar cheese are just a few of the flavors that aren’t just tasty, put which serve as a testament to the bounty Irish farms yield.

Back to the Wake Me Up cover though. Why did these young people impress and inspire me so much? Not just because they took the time to master a cover song sung in an incredibly difficult language, but because they made it look fun. This group of kids recorded the song in just 8 hours, put it on YouTube and now it has nearly 3 million views. That’s impressive for a tune very few of the viewers can understand. So why is it popular? Because of the passion that is so clearly seen on their faces, it’s infectious and it’s hard not to feel proud of Ireland even if you don’t have a drop of Irish blood in your system.

That passion inspired me once again. I was in a lull of sorts, I was exhausted, over worked from too many commitments and unsure what next steps to take in life. But after one short week in Ireland, I feel energized, my path never more clear.

So it’s for that passion which I must thank Ireland and the amazing young talents behind this cover song. You have inspired me and I’m sure I’m not alone. Just see for yourself, here is that all too impressive video.

8 thoughts on “Mental Reboot: Inspired By The Passion of Ireland”