Food is arguably the most important part of the travel experience. The sensations from what we eat and drink shape memories that are stronger than any other and persist when everything else has faded away. Some destinations are better than others though when it comes to culinary travel, and amongst those there are only a handful of dishes I would travel back for. Of those delicious morsels of yummy goodness, these are my favorite.

1. Knafeh in Jordan – Like so many other foods in the Middle East, knafeh is pan-Arab and can be found throughout the region. Knafeh is made using very fine vermicelli-like pastry that is heated with butter before a soft, white cheese is spread over it. The process is repeated a few times and then the dessert is topped with a sticky syrup and some crushed pistachios. An unlikely combination, but it quickly became a personal favorite.

At first I wasn’t sure, I haven’t had great experiences with global desserts, but I decided to be polite. I watched the cooks make the sticky concoction and gave my best fake smile when they handed me a plate. I went off to the side and sat on a half- wall as I closed my eyes and took a bite. Perhaps predictably, I loved it. It was a cool day and the steaming hot knafeh was the perfect remedy. Sure it was sticky, but the pasta and cheese combined to make a delicious snack. I gobbled it up and looked around, expecting stares but instead found myself accompanied by scores of others enjoying the dessert as much as I did.

Where to get it: Habibah‘s, Amman, Jordan

2. The Perfect Pain au Chocolate in Paris – I’ve always had a special place in my heart for the classic chocolate croissant. I’m not sure why, but it has become a must have snack for me on every trip to Europe. Universally found at cafes and pastry shops for breakfast, it can also make for a fantastic afternoon snack. For the uninitiated, pain au chocolat is a square piece of dough similar to puff pastry with one or two pieces of chocolate in the center that is then baked to French pastry perfection. This delicious snack food isn’t limited to France, you can find it all around the world, but the best are almost always found in Paris. I don’t have a preferred location for my favorite breakfast food, but what I love most about it is how easy it is to find in the city. They’re everywhere, from train station cafes to the best bakeries in the city. For the ultimate in European experiences, grab a fresh croissant and a coffee and watch the world walk by from a quiet cafe as you enjoy your perfect snack.

Where to get it: Paris, City of Lights

3. Tortellini in Brodo in Bologna – Unlike some of its Italian neighbors, Bologna’s strength doesn’t come from being ostentatious or flashy, it comes from embracing everything that has made it great over the years. The hominess, this love of the traditional of course rewards the food lover and may best be seen in the popular restaurant Trattoria Anna Maria. This classic establishment has been creating some of the best traditional favorites for almost thirty years and while it’s hard to choose a favorite item from their menu, the tortellini in brodo is truly something I’ll never forget. This classic, belly-warming dish is as basic as it sounds, fresh tortellini in a hearty chicken broth is simplicity at its finest. But the whole is definitely more than the sum of its parts and at the first bite you’ll wish you had tried this homey soup earlier in your life. I still think about that starter and Anna Maria’s, and if that’s not the hallmark of a great meal I don’t know what is.

4. Crispy Chicken and Basil in Bangkok – The reason I include this meal is twofold. First, it’s to highlight the fact that the best Thai cuisine, in my opinion, can be (and should be) very simple. A quick chicken and rice dish prepared at a cart is probably the best meal in town. Anything more complicated and you start to lose the essence of Thai culture and cuisine. The other reason I include it is because of the memories the meal evokes for me and highlights just how important food is in the travel experience.

Located on the mighty Chao Phraya River, near Thewet Pier, is one of my favorite establishments in Bangkok, the In Love Restaurant. I’ve been each time I visited the Thai capital and thankfully not much has changed. One of the best features of the restaurant isn’t only the food, it’s the view, especially at sunset. Sitting there watching the sky explode in hues of purple and pink as boats race along the busy river captures for me what Bangkok is all about. Fortunately the food is good too. My go-to dish is a simple one, crispy chicken with basil. The combination of flavors isn’t just delicious but exemplify Bangkok for me, and that’s why it’s so special.

Where to get it: In Love Restaurant, 2/1 Khrung Kasem Road | Thewes Pier, Bangkok, Thailand

5. Hawaiian Soul Food – Hawaii has a unique flavor to its foods, something I call Hawaiian soul food. It’s good, simple cooking made with love and is the ultimate in comfort food. Home Hawaiian cooking draws on a variety of influences from American to Japanese with some island flair thrown in. Dishes like tonkatsu and manapua are personal favorites, but on a trip last year I discovered a new dish that I felt compelled to try.

I love finding hole in the wall restaurants, but I was dubious as I pulled up to a strip mall near the airport on Maui. Based on the aromas that met me as I entered the dining room at Da Kitchen, I was glad I had trusted the advice a local resident provided. There was one item at Da Kitchen though I hadn’t seen anywhere else, fried spam musubi. Spam is hugely popular on the islands, due to an overabundance of the potted meat during World War II and a few creative cooks. Another fixture of Hawaiian cuisine is Japanese food, so it’s not too surprising I guess that some enterprising soul decided to combine the two. Let me be clear, combining spam with rice and wrapping it in nori isn’t unusual, you can buy it everywhere in Hawaii. What’s different is that at Da Kitchen the concoction is taken to a new level by deep-frying it. I’m a firm believer that anything fried must be good, and that proved true as I bit into the musubi. It may not be for everyone, but it was another great lesson in Hawaiian soul food and I loved every second of it. 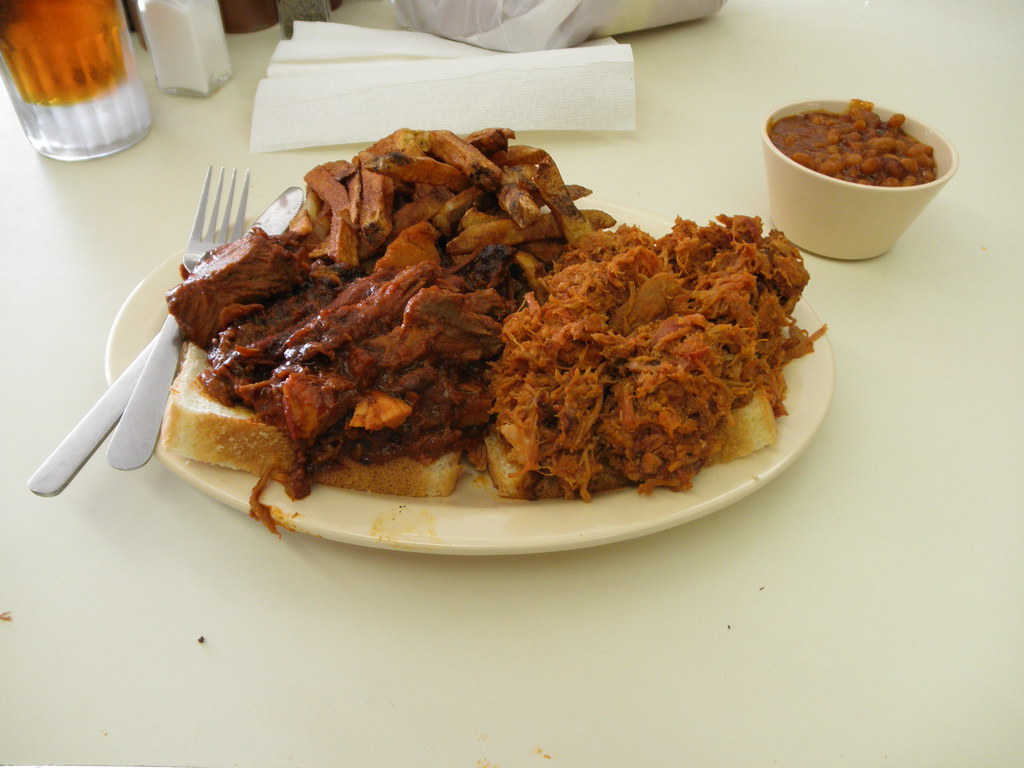 Honorable Mention – Pulled Pork BBQ, The South, USA – I’ve lived in 12 states from New Hampshire to Georgia, so it’s hard to lay claim to a region of the United States with a straight face. BUT, if forced to choose, I always say that I’m a son of the south, which is more or less true. Half of my family lives in the south, as I have done since 1991. So, I think it’s ok to also promote our regional cuisine as the best in the country, with great BBQ rising to the top of that delicious list. There is nothing quite so satisfying as a hearty meal of well cooked and well sauced BBQ. Truly an art form, the master cook spends years developing the recipe and hours slow cooking the meat. Served with a variety of sides including baked beans, hushpuppies and French fries, this massive meal may not be appropriate for daily consumption, but is a treat whenever you are lucky enough to enjoy it. All praise the American BBQ sandwich, and long may it cook.

What are some meals you’d travel to enjoy again?