I’ve written about how misunderstood Frankfurt, Germany is, and it’s easy to understand why some people think it’s boring. In a country of medieval villages and iconic cities, it’s difficult for a city like Frankfurt to stand out. Most people only know the banking and financial side to this historic city, but as I learned there’s so much more and I think it can be summed up in three words.

Traditional – As an American I expect certain things whenever I visit Europe. Easy access to good, strong coffee and fluffy pastries, buildings older than the country in which I live and an ease of life that makes any trip a pleasure are all at the top of my list. Going beyond the EU banking side of town and walking through the true altstadt, this classic and wonderful Europulchritude abounds in spades. Even though large swaths of the town were destroyed during World War II, the city went through great pains to restore the damaged buildings to their former glory. It’s not just about rebuilding what was lost, it’s about recapturing an important part of the city’s legacy. The Paulskirche is the site where the modern German state was formed and the gingerbread buildings linking the main square carry stories and personalities all of their own. We’re lucky that today as visitors we can walk around this historic core and get an idea of not just what it means to be a Frankfurter (stop laughing) but to be a German. Plus the pretzels are amazing. 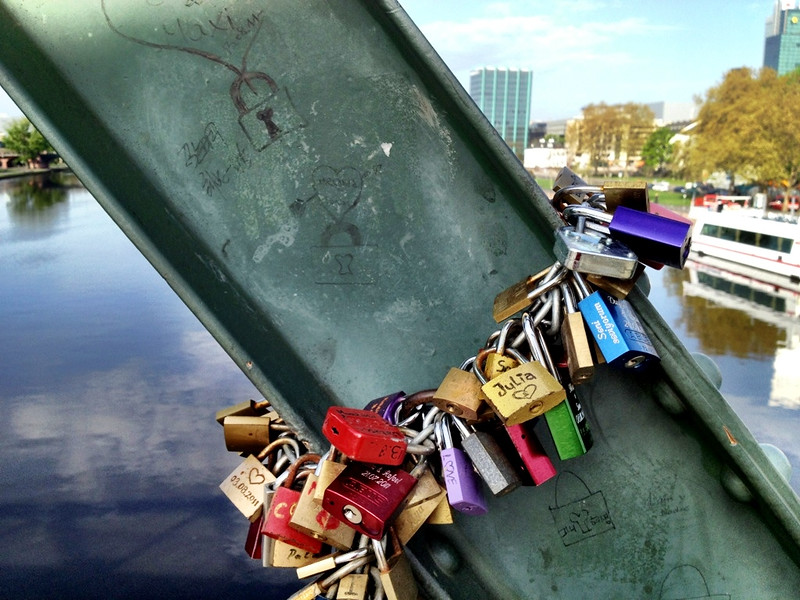 Striking – Frankfurt is a beautiful city, a damned beautiful one. I suspected this was true as I wandered around town, but it was confirmed without a doubt as I ambled around town without any clear agenda and found the Eiserner Steg or The Iron Footbridge. At first it may not seem like much, a bridge not unlike any other but when the River Main is the backdrop, and hundreds of mysteriously barren trees the accents, there’s no denying the beauty. It also possesses a certain beauty of spirit, which according to the hundreds of locks on the bridge has not gone unnoticed. In a tradition that now spans the globe, young lovers inscribe locks with their initials and secure them to the bridge. When I was there I found scores of them, each professing a love unique to its owners and stories I would love to know. 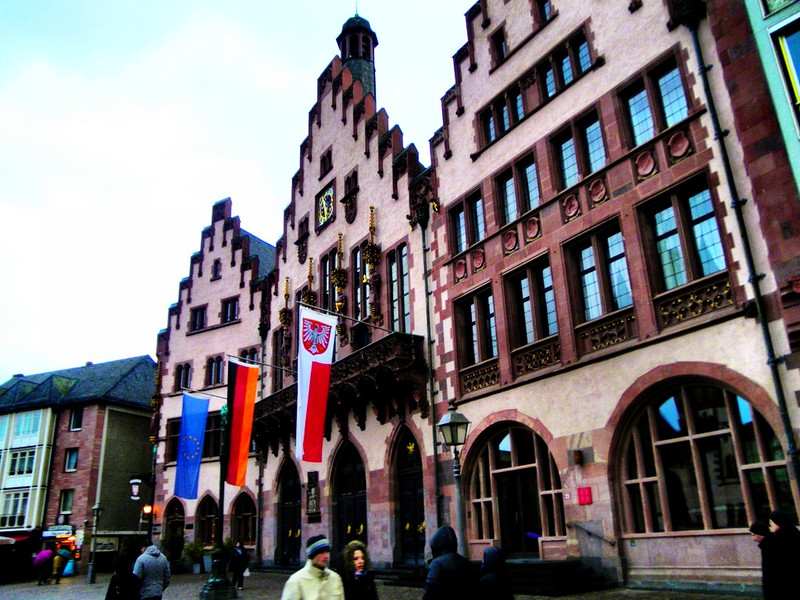 Relatable – Even though I have a Pollyannaish way of liking most places I visit, I found Frankfurt to be unusually relatable. Sure, it’s a big city but it never felt that way to me. Walking around town, navigating the trams and subway are easy and dare I say a pleasure? Shopkeepers smiled as I passed and restaurant owners were patient as I mangled the language in an attempt to secure a schnitzel and some beer. I felt at home almost instantly, making the rest of my visit not awkward, but fun. Maybe that’s another word I should’ve included, fun. It’s not entertaining in a Disney World or LegoLand kind of way, but it’s fun in its ability to charm and fascinate. I just love walking around the old town, having a light snack in front of the main square and trying to find the best café for the city’s famous apple wine.  So while it may not be as flashy as Paris or as ancient as Rome, Frankfurt is an easy city to know and an easy one to love.

Have you been to Frankfurt? What are some things you like about it?

10 thoughts on “Frankfurt in Three Words”