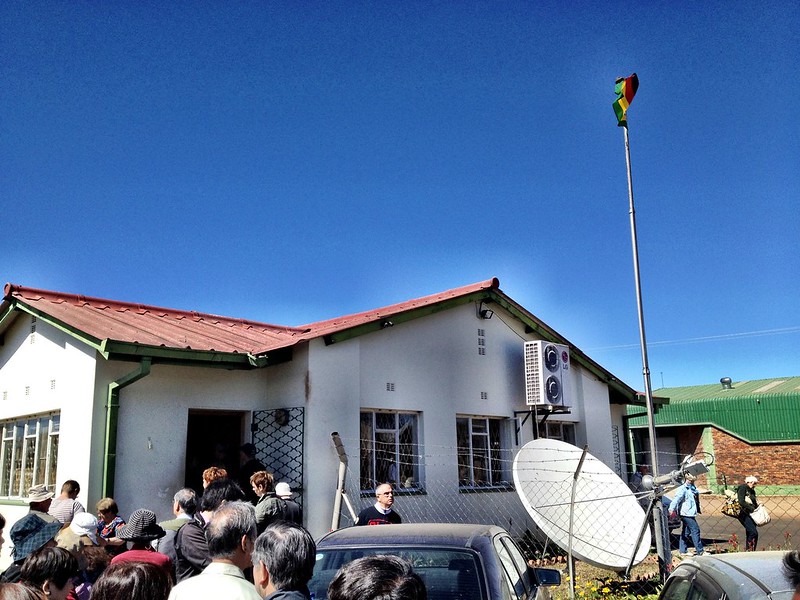 When I first learned that I would be visiting Zimbabwe, I was excited. Then I began to worry. I didn’t worry just about my physical safety, but for my moral well-being. Not too long ago I chided people who travel to Uganda, propping up a regime that wants to institute the death penalty for all gay people. I was shocked people would support the government financially while such a repugnant policy was still being considered. But then, on a hot day in August I found myself at the Zimbabwean border, paying the $35 fee for an entrance visa and trekking into the country in a comfortable van. What was I doing?

So what’s the big deal? Well, like most things in life, it’s complicated. In 1980 Zimbabwe was recognized by the international community as an independent nation and Robert Mugabe took power as Prime Minister (he later became President in 1987). Since then Mugabe has been the only ruler and has been accused of many human rights abuses including violent intimidation and worse to those who oppose his regime. In 2000 he pursued a land redistribution program that drove a sizable portion of the white population out of the country. The destruction of the farms led to shortages and an economic spiral, famously epitomized by their $10 Trillion notes. In addition to rape, murder, kidnapping and intimidation, the ruling party has also recruited child soldiers who roam towns through what has been described as state sponsored terror. Fun place.

Which brings us to today and my luxury adventure in Zimbabwe. After the trip I wondered what, if anything, I should say about the country and my experiences there, which were all terrific. Here’s my dilemma and the two counteracting arguments in this debate. As I debated in my Uganda post, many believe that any visit to Zimbabwe is a tacit approval of the government’s policies and that by supporting the tourism industry, a message is sent that things aren’t so bad. If any change is to be realized, all tourism must stop and the need for change will come from within. That’s one argument. The other is that by not visiting, you aren’t hurting the government, you’re only hurting the people working in the country. The people who toil for tour companies and hotels, the ones who depend on their wages to live. One should be mindful of the policies of the country, but not necessarily allow them to dictate one’s behavior. That’s the second argument.

Yeah, see I can relate to both sides in this debate. Ultimately I decided to go to Zimbabwe because I knew I would be in areas that are as safe as one could hope. The resort is just a few miles from Victoria Falls, a heavily touristed area near the border. I also really wanted to see Zimbabwe first hand. Call it a sort of morbid curiosity, but I wanted to witness this place I’d been reading about for so long; to stare the boogeyman in the face so to speak.

In retrospect I’m glad I went. I’m glad I got to see some amazing research on black rhino conservation and of course to explore the Victoria Falls area. But I’m torn again in how to share this information or whether or not I should share it at all. I’m lucky, I have a voice and a bully pulpit from which to share with you all my travel experiences in order to help you make the best travel decisions possible. But I don’t want my thoughts to be misinterpreted as support of the Zimbabwean government and I don’t want people to think that I don’t care about human rights abuses. Of course I do. So I’m a bit stuck.

This is where you come in. What would you like to hear about? Do you want to know what it’s like to travel in Zimbabwe, to stand two feet from a massive black rhino and to learn about the extraordinary measures through which scientists hope to save them? Or would you rather I gloss over this particular stop on my trip to Africa, so as not to appear supportive of a corrupt regime?

I would really like to hear your opinions on this and any country where a similar dilemma may occur.

31 thoughts on “Controversial Travel – What To Say About Zimbabwe?”